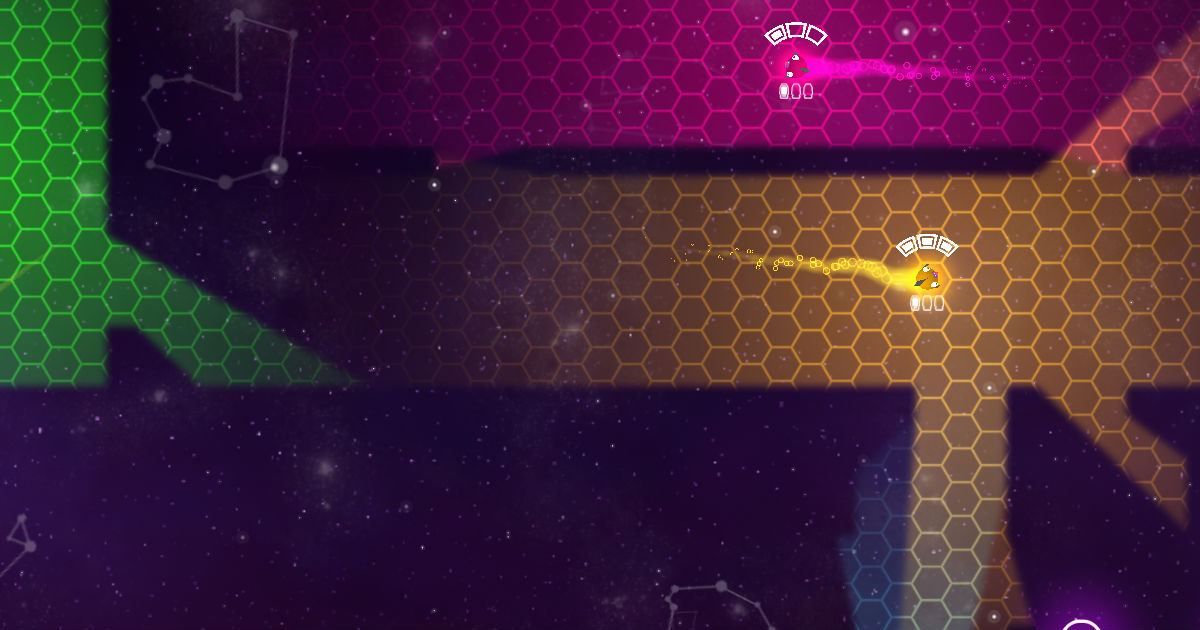 It’s interesting to see opinions fly back and forth for offline indie arena games. For years developers have been stating that online play is often impossible for small projects, either due to budget or design limitations, or the simple fact that lag would ruin their pixel-perfect gameplay flow.

The fact remains though that some games just don’t have enough content to keep you interested for more than a short while, and Light Bound is one of those examples.

Taking a quick look at one screenshot of Light Bound will give you the gist of what’s going on. As a top-down shooter, it pits up to four players against each other in a celestial arena filled with fog-of-war effects and bright colors reminiscent of Pocketwatch Games’ Monaco. After booting it up, the game even notes that it “plays best with a controller,” and I’d highly recommend following that advice, especially if you’re keen on local multiplayer.

Movement is all very basic and smooth, as you’ll guide your ship around the arena to pick up various power-ups, like spread or bouncy shots. One button controls your attacks, and really, that’s about it. Your objective is to stay out of firing range while you roam around and pick up more ammo.

There are a few cool effects that facilitate the action, like the aforementioned fog of war that prevents you from seeing the entire (randomly generated) battlefield at once. Additionally, Light Bound has a cool “gradual unpause” mechanic that slows the action down after resuming a session. Combined with the stylish use of colors, it’s a pretty neat looking indie shooter.

It’s ultimately lacking in variety however, with a score-attack arcade mode and an arena option, the latter of which functions as the meat of the experience. In arcade, you’ll gather ammo to quickly take down your AI opponents, with an emphasis on speed, exemplified with a timer that forces you to act quickly. It’s endless, with an ego-boosting (or draining) leaderboard listing at the end. While it was interesting at first, I quickly gravitated to the arena.

Things aren’t that much different over there either, as there are four deathmatch variants (standard kills, lives, tag, and a mode with moving debuff rings), and only one overtly unique mode — Clutch, which basically operates like Oddball from the Halo series. Your mileage is definitely going to vary depending on how many friends you can get together on the couch, but full bot support is the saving grace of arena mode, as bots are formidable enough to keep you playing (outside of Clutch, where they don’t really adhere to the principles of the mode and kind of just go for kills).

While it presents an underwhelming amount of play options, Light Bound shines with four players at the helm. There’s options for teams (with silly randomly generated player names), and a number of custom options like life and weapon toggles. It isn’t going to revolutionize the arena genre, but having four shooter enthusiast friends to split the cost isn’t a bad way to go.