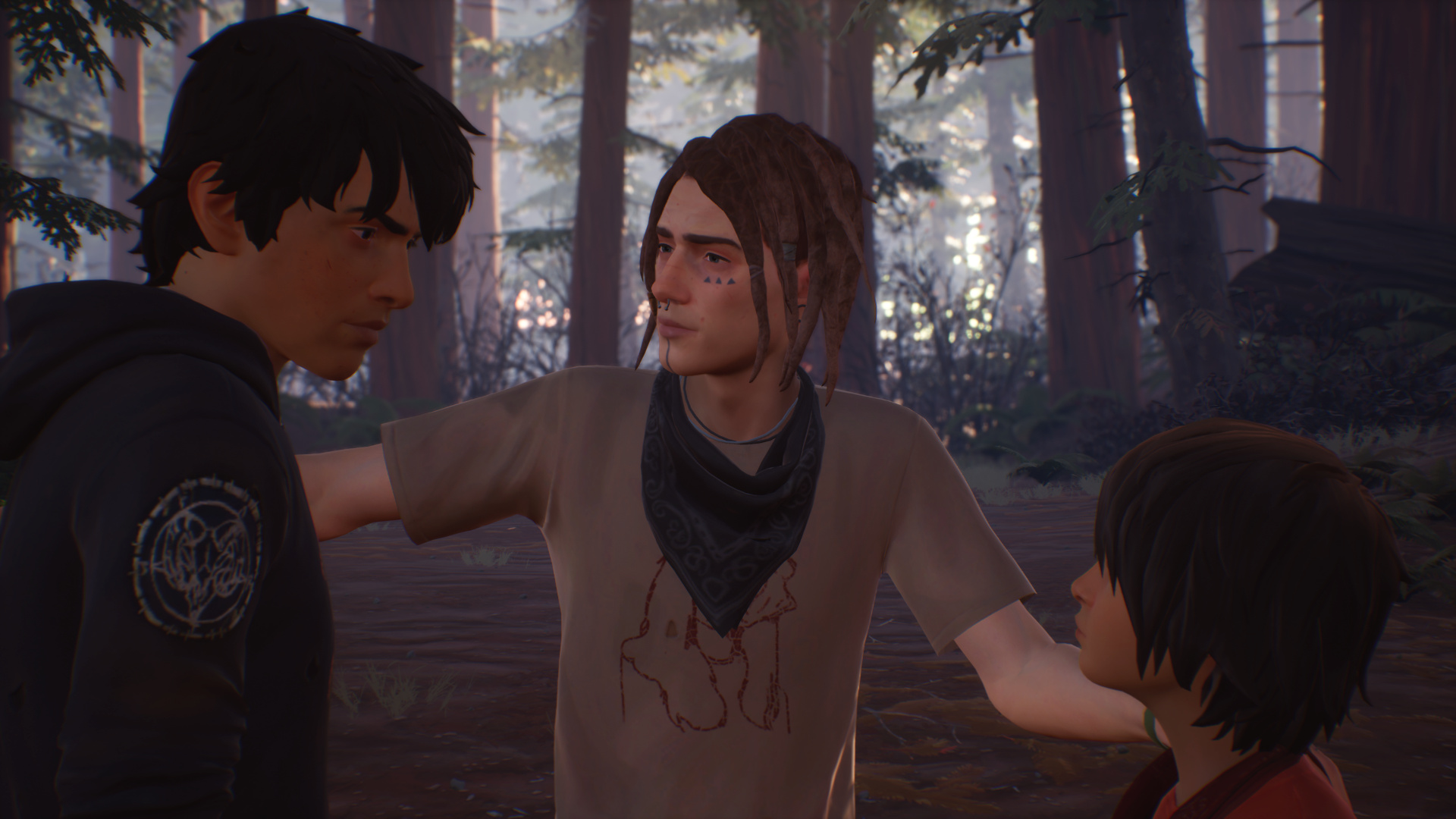 [You can read reviews for past episodes here: Episode 1, Episode 2]

“Aww, you’ll get scars but you’ll [learn to cope]. Part of the fun!” Sean Diaz is told this early into Life is Strange 2: Episode 3 by a peer who’s talking about literal scars from their illegal employment trimming marijuana buds. But, it’s this same character who later sits everyone down by the fire and suggests they bear their emotional scars by telling the story of the worst thing that has ever happened to them.

Sean and Daniel Diaz already have plenty of scars — physical and emotional — and they’re cuts that are far deeper than anything a pair of tiny gardening shears could manage. “Part of the fun” is a stretch, something that only the cheeriest and most optimistic glass-half-fuller would suggest. Fun or not, it’s the reality of the Diaz brothers’ circumstance.

Life is Strange 2‘s third episode, much like the second, puts Sean and Daniel in relative comfort. They’re temporarily settled in a commune in the California forest, set up with a bunch of social misfits who all live out of their tents. Free spirits and a temporary gig harvesting weed are the only things everyone has in common. Just like the beginning of the second episode, they still shit in buckets. They have gainful employment but not that much has changed.

Wastelands feels like the most stunted of Life is Strange 2‘s three episodes. It’s the shortest, it’s the one that puts the least emphasis on family, and it’s the most emotionally even keel. Most important, Wastelands is a chapter where Daniel doesn’t really learn any lessons. Halfway through the episode, Daniel makes a grand, emphatic gesture, exclaiming “I’m not a kid anymore!” He believes that he’s grown up, meaning that he’s resistant to growing further.

There will almost certainly be a developmental payoff to Daniel’s stubbornness in later episodes, but it comes at a cost in Wastelands. Sean is ineffective at getting his message across because Daniel is done listening. In a way, it’s encouraging to see Daniel given some autonomy. But, as an adult, it’s frustrating to see a child insist that they have all the answers — especially considering the uniquely terrible situation the Diaz brothers find themselves in.

Sean, to his credit, still tries to play the role of father figure. Of the two, Sean is the one who’s actively growing as a person because he’s taking on new responsibilities. Even though Daniel’s convinced he has it all figured out, Sean — or my version of Sean, anyway — won’t let his guard down. Around the campfire, Sean has the option to smoke weed or drink beer. Sean stayed sober because Daniel was sitting right next to him. He really could’ve used something to take the edge off, but not with Daniel around. Daniel, a self-proclaimed adult now, tried taking a hit off the joint before Sean intervened.

Because this is a tragic road trip, Sean and Daniel aren’t forced to deal with the day-to-day ramifications of a settled life. They’re nomads, making a mess of one place before up and leaving for a lower latitude. It affords Life is Strange 2 the convenience of always having somewhere new to explore. The life around an illegal marijuana grow op is the best setting yet. However, the intensity of the finale is diminished when you remember that relationships, like locations, are fleeting.

There’s no question that Sean and Daniel leave Life is Strange 2‘s third episode with more scars than they began with. Scars have a way of robbing innocence and dispiriting the spirited. It’s no wonder Daniel is disillusioned. But that headstrong attitude leaves Wastelands feeling like an episode without much development. Deep in the California forest, the weed is growing but that’s about it.