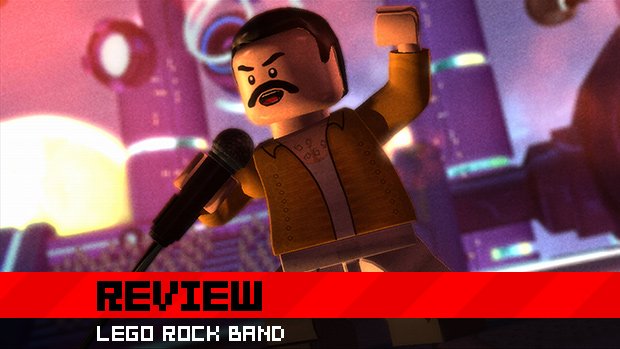 A year ago, the music game genre was at its peak. Rock Band 2 and Guitar Hero World Tour had recently launched to rave reviews, and looking back, it appears that the developers of those games — Harmonix and Neversoft, respectively — saw the success of their products as a mandate to churn out rhythm games at a faster pace.

But considering the ever-deepening recession, how retailers are overflowing with sizable boxes full of plastic instruments, and lower-than-expected sales of The Beatles: Rock Band and Guitar Hero 5, one wonders if the music game market has reached saturation. LEGO Rock Band is Harmonix’s family-friendly game, a direct competitor to Activision’s Band Hero, and before its release earlier this month, questions abounded as to whether its existence was warranted. Hit the jump to find out. 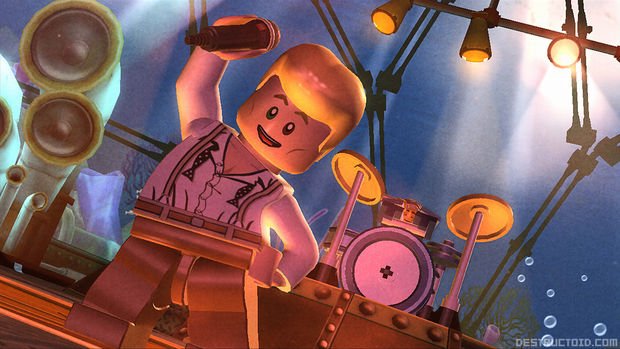 Even when LEGO Rock Band was just a rumor, gamers were extremely skeptical of such a game: sure, Traveller’s Tales had mixed the LEGO brand quite well with franchises like Star Wars and Indiana Jones, but what could LEGO possibly bring to Rock Band, aside from a mere aesthetic overhaul? They were right to ask that question — while the LEGO theme makes LEGO Rock Band charming at every turn, the game mostly feels like a Rock Band 2 re-skin, and in the wake of the sublime The Beatles: Rock Band, a step backward for Harmonix’s beloved franchise.

LEGO Rock Band’s visuals take after Rock Band 2; the art direction for both games is very similar, with the same menu styles and background patterns comprising the design. This isn’t necessarily a bad thing, since Rock Band 2 was an exemplar of graphic design, but it’s somewhat disappointing considering the great leaps between Rock Band and Rock Band 2, and between Rock Band 2 and The Beatles: Rock Band. 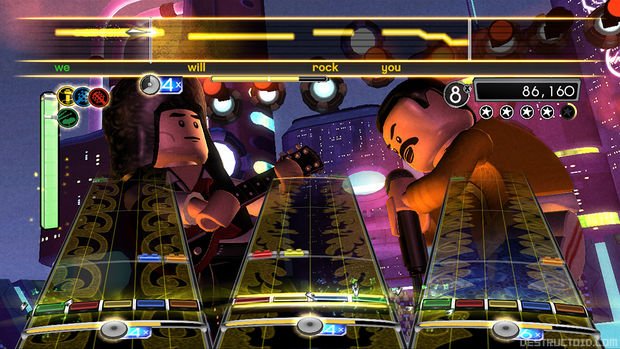 The game disc features only 45 songs, a far cry from the 84 tracks included in Rock Band 2 (and even 13 fewer selections than the original Rock Band). Granted, LEGO Rock Band is “value-priced” at $49.99, and you can export all of the on-disc songs to your PS3 or 360 hard drive for use in Rock Band or Rock Band 2. But that’ll run you $10 for 45 songs, whereas the song export key for 55 of Rock Band’s 58 songs cost $5. Speaking of the game’s songs, the LEGO Rock Band soundtrack is all over the place. Harmonix apparently wanted to include a wide enough variety in the set list to ensure that fans of all kinds of music would find something to enjoy, but here, it just comes off as scattershot. And LEGO Rock Band seems to have a higher percentage of music that I’d term just plain bad, which doesn’t help.

Legitimately fun-for-everyone songs like the Ghostbusters theme and Europe’s “The Final Countdown” appear alongside seemingly random selections such as “Breakout” by Foo Fighters. And decades-old classics like “Fire” by The Jimi Hendrix Experience and David Bowie’s “Let’s Dance” are juxtaposed with stuff from artists you’ve never heard of (We the Kings — huh?), most of whom are from the 2000s. In fact, the majority of the soundtrack is from the current decade, and in my opinion, the game suffers because of that. That’s not to say that the past ten years haven’t seen some great music, or that there aren’t a few lesser-known gems in LEGO Rock Band — it’s just that many of the songs and artists here don’t seem deserving of enshrinement in a music game set list. (Were there lots of fans clamoring for the inclusion of Lostprophets or Boys Like Girls? Really?) But maybe I’m just bitter at Harmonix for making me play through songs by Good Charlotte, Rascal Flatts, and Korn. Ick. And with only 45 songs available, you’ll be replaying songs more than a few times (although, in the “choose your set list” gigs, you can play any kid-safe songs that are already on your PS3/360 hard drive from Rock Band or DLC). 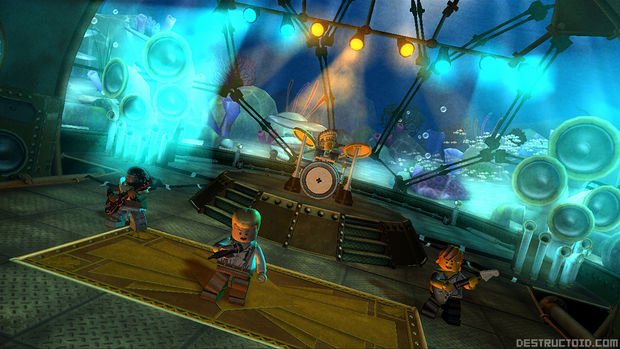 Soundtrack idiosyncrasies aside, LEGO Rock Band is relatively similar to prior Rock Band games. The meat and potatoes is, as always, the Story Mode, which follows the same basic non-linear structure as the career mode in Rock Band 2: you play songs to earn money (“studs” instead of cash, here) and unlock better transportation to new venues, which are different locations in the story instead of cities. To their credit, Harmonix and Traveller’s Tales did a great job infusing the career mode with LEGO-ness; I couldn’t help but laugh at the funny, cute story cut-scenes and little LEGO dudes. And LEGO Rock Band introduces a LEGO-ized fail mechanic, too. You can’t actually fail songs, regardless of difficulty, but if you miss enough notes, you’ll lose all the studs you’ve accrued to that point in the song. However, you can regain them by getting back on track. It’s essentially like rings in Sonic the Hedgehog.

Important story points are crystallized in “Rock Power Challenges,” which provide a background for playing a particular song. One of the challenges tasks you with ridding a mansion of ghosts by playing — you guessed it — “Ghostbusters.” The descriptions for these songs usually involve the phrase “use the power of rock to _____,” and the game’s cut-scenes set up the events in a charming manner. During Rock Power Challenges, you can fail, and you have to be especially proficient, since there’s no Overdrive, Bass Groove, drum fills, or solo sections available. The Story Mode’s difficulty curve is completely out of whack: early on, I had to contend with “Grace” by Supergrass, a song rated at 4/5 difficulty, after I had completed a few easier songs. 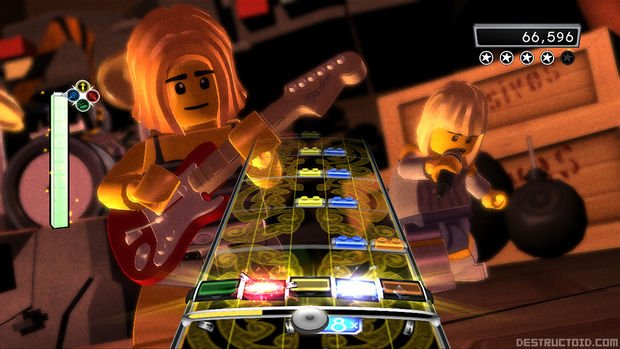 Ultimately, I couldn’t shake the feeling that all of this amounts to little more than window dressing. And that’s the main problem with this game, a microcosm of the current state of the music game genre. A lot of work clearly went into crafting the Story Mode, but that doesn’t change the fact that it’s a different package for the same old Rock Band setup: play songs, buy stuff to outfit your band with, and travel to other places where you play more songs. This is the fourth full-band game from Harmonix (not counting Rock Band Unplugged for the PSP), and the core mechanic, while still fun, is getting stale by now. There are enough great songs on the disc to entice people to buy the game as a track pack to be exported to their console’s hard drive, but the LEGO branding doesn’t change up the experience enough to convince me that the 45 songs here couldn’t have been released as DLC. Hopefully, Rock Band 3 will.