Hold on to your butts

Another year, another beloved franchise gets the LEGO treatment. This year, blocks and dinosaurs come together in LEGO Jurassic World, a compilation of games spanning the entire Jurassic Park film franchise. Released simultaneously with the film version of Jurassic World, players can run around and explore scenes and locations from not only the newest movie, but the first three as well.

With a steady influx of multiple LEGO titles being released every year from developer Traveller’s Tales, we pretty much know what to expect from the series by now. Players will of course be busy destroying LEGO creations, building new things out of the loose pieces, and collecting an endless amount of studs, bricks, and hidden objects. The only real difference is the Jurassic Park theme, and given how popular of a franchise it is, that might just be enough to get people interested in this game. 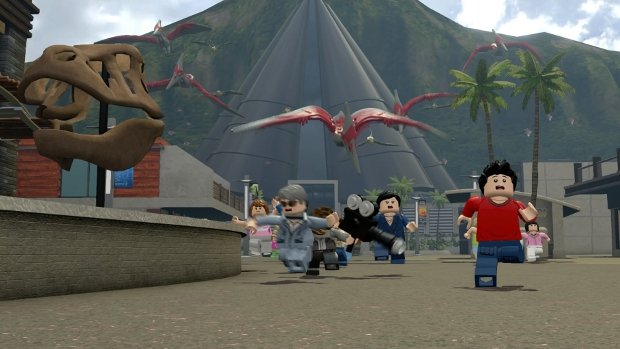 As a huge Jurassic Park fan, LEGO Jurassic World is pretty much exactly what I expected from a dinosaur game themed around children’s toys. There is no shortage of humor, plenty of satisfying references to the movies and books, playable dinosaurs, and I get to run around as Ian Malcolm with his shirt torn open. What more could I ask for?

LEGO Jurassic World‘s story is built around the plots of the movies, but while the movies can be tense and thrilling, the game remains silly and lighthearted. Death scenes from the films are played out in a comedic fashion. The LEGO characters are never actually killed; instead, they usually end up sharing a goofy moment with the dinosaur that attacks them. For example, Gennaro can be seen cleaning the T. Rex’s teeth with a toilet brush after being pulled from his restroom hiding place, and the raptor tamer who dies in the very first scene of Jurassic Park only loses the precious sausage he was holding onto rather than his legs (there’s a weird recurring sausage joke for some reason, which I can’t say I really understood). Meanwhile, other parts feature raptors riding motorcycles, wearing fruit hats, and chasing lawn mowers through the long grass, so the dinos are generally more charming than they are terrifying. Of course, for a LEGO game, this was kind of a necessity.

Gameplay is heavily puzzle-based, requiring obstacles to be solved by choosing the specific character required for the task. Most of these obstacles are accompanied by button prompts, and there are numerous quick time events scattered throughout as well. There is also some light combat, whenever the party is attacked by dinosaurs or InGen employees, but it involves little more than punching things until they get dizzy or fall apart. Characters do have health bars, but the only penalty for dying is losing a few studs, so it’s not really a big deal. The health bars honestly feel wholly unnecessary, as there aren’t any lives and characters already essentially feel invincible. They could have probably scrapped that mechanic entirely.

It’s possible to play as nearly every character from the Jurassic Park films, even minor characters such as Mr. DNA and that weird boy at the dig site who says raptors look like giant turkeys. Each character has their own unique skills which typically play off of their personalities and roles in the films, all of which will need to be utilized in order to traverse each level. Some characters, like Dr. Grant and Gray Mitchell, are good at building things out of dinosaur bones; characters like Lex Murphy and Kelly Malcolm can scream loud enough to shatter glass; characters like Tim Murphy and Ian Malcolm have items that can illuminate dark areas (night vision goggles and flares, for example); and others like Ellie Sattler and Owen Grady aren’t afraid to get dirty and rummage through dino droppings (by diving in head first, no less!). It’s necessary to play as many different characters in order to clear all of the puzzles and obstacles in the game.

Of course, there’s not only human characters, but dinosaurs to control as well. Most dinosaurs are unlocked by collecting amber bricks hidden in every level. They can be summoned via dinosaur creation pads, and sick dinosaurs can be healed in order to join the party as well. The dinosaurs come with their own sets of skills; Triceratops can charge and bash open large objects, Dilophosaurus can melt certain things with its venom, T. Rex can roar loud enough to shatter stuff, and Velociraptors can pull switches and sniff out hidden objects. The craziest option is the enormous Brachiosaurus, which can be used to crush certain platforms with a huge stomp, but it’s so gigantic and slow that it’s almost hilarious. It’s even possible to play as Pteranodons and Mosasaurus, although they’re restricted to the aviary and aquarium, respectively. 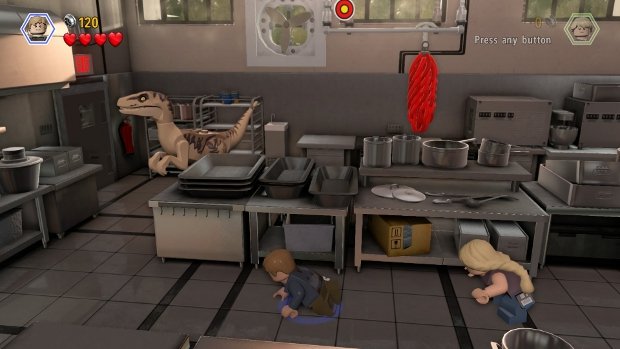 Story mode will take the player through twenty levels centered around many of the most memorable and action-packed scenes from the movies. It’s really fun to reenact classic scenes like the very first T. Rex attack, the raptors in the kitchen, the San Diego crisis, and more through the playful lens of the LEGO world. Every level is filled with puzzles to solve, obstacles to overcome, and a set amount of collectibles to find. Many levels implement chase sequences, such as running from the Gallimimus herd, or puzzle-based boss fights, like taking down Indominus Rex. There’s nothing too complicated, though, so it should be an easy ride for most players.

Upon completing each level in story mode, free play mode will be unlocked, allowing players to choose any character they want and switch to someone else at any time. Many of the collectibles can only be obtained in free play, since the characters in story mode might not have the required abilities, so it’s necessary to play each level at least two times in order to find everything.

Outside of story mode, players can also freely explore each of the four parks. The parks contain more collectibles to find, sick dinosaurs and workers in peril to help, characters to unlock, photograph locations, races, and more. The parks on Isla Sorna are unfortunately rather small and unexciting, but Isla Nublar’s Jurassic Park and Jurassic World are both huge and full of all sorts of attractions and cool areas to discover. Strangely, though, once story mode is completed, free play in the parks takes place entirely during nighttime, which kind of bothered me as some areas just seem much less exciting in the dark. I’d prefer to view these beautiful parks in the bright sunshine. [Edit: Apparently, this can be changed, but only by fast travelling to specially marked areas on the map. Still an odd choice, but at least there are options!] 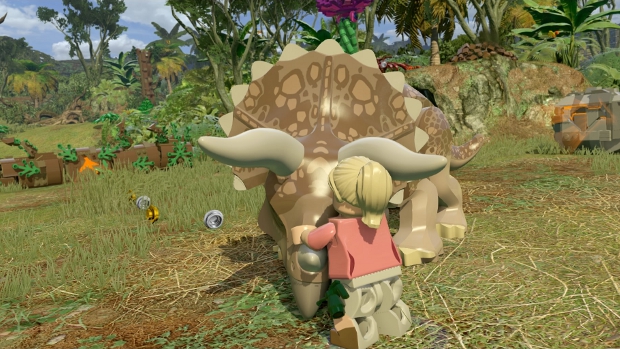 Split-screen co-op is also an option, and players can jump in and out of the game at any time. Co-op can make solving puzzles and overcoming obstacles much easier, as players will not need to switch between characters as often and multiple tasks can be completed at once. For such a light-hearted adventure as LEGO Jurassic World, I can definitely see co-op being a popular option.

The best aspect of LEGO Jurassic World for me was all the little nuances and nods to the films which were sprinkled throughout. Idle animations for characters usually highlighted certain aspects of their personalities or referenced specific moments from the movies. For example, Zach Mitchell will put on his headphones and start dancing, Amanda Kirby will test her megaphone (put that thing away!), and Ian Malcolm will run a Chaos Theory experiment by dripping water onto his hand. Many of the trophies also make great references to the movies; I think my favorite is the “Hello John!” trophy which is awarded for having both characters set to John Hammond. I also loved that Mr. DNA was in charge of all the tutorials and loading screen trivia.

Aside from borrowing plot, characters, and locations from the movies, LEGO Jurassic World also borrows sound clips. While some new dialogue was recorded specifically for the game (mostly for the Jurassic World section), a lot of the dialogue is taken directly from the films. This can be entertaining at times (hearing Jeff Goldblum’s ridiculous laugh on the helicopter never gets old, even when it’s coming out of a LEGO character’s mouth), but it can also be quite jarring. Since the tone of the movies does not match the tone of the game, the dialogue is often way too tense and emotional for what should be silly, light-hearted scenes. There are also many instances where background noise from the films can be heard in the game’s dialogue, which sounds really strange when compared to the newly recorded dialogue. 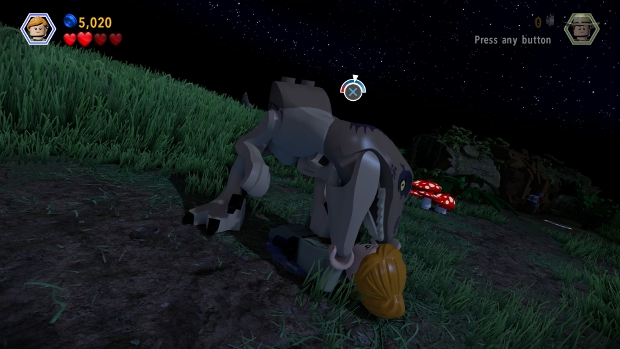 Unfortunately, LEGO Jurassic World is not without its fair share of bugs. During my time with the game, there were several instances where I had to restart a level after a character got stuck between a wall and an object and couldn’t move or jump to escape, or after they fell through the ground when I switched away from them. There were also a few instances where, after spawning a dinosaur and taking control of it, I could no longer switch to any other character and was permanently stuck in my dinosaur body. Usually, this meant I lost all progress on that level up to the point where I got stuck, so that was always a bummer.

While it may have its flaws, I was still perfectly satisfied with my time in LEGO Jurassic World. Fans of the LEGO games should basically know what to expect, and Jurassic Park fans should be more than happy with the story, cutscenes, characters, and references. It captured all of my favorite Jurassic Park moments and added its own unique sense of humor into the mix, and that’s essentially all I really wanted. And if you still need a reason to play this, just remember that is has LEGO Jeff Goldblum. Let’s be honest: that’s all anyone really needs.