Ladies and gentlemen, we are in the company of a grid-based, first-person dungeon crawler in the year 2012. No, you are not dreaming. You’ve just been presented with Legend of Grimrock from the folks over at Almost Human. Whether this brings back fond memories of Dungeon Master or is completely new to you, I can easily say that this title delivers.

Personally, when I hear the term “dungeon crawler,” I cringe a little. I think of games that are incredibly bland, repetitious, and uninspired. Luckily, Legend of Grimrock is none of these things. With clever puzzles, tactical combat, and secrets upon secrets, Grimrock takes an old-school feel and injects it seamlessly into the modern era. 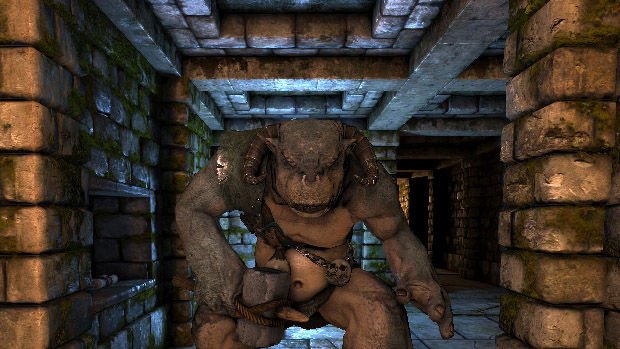 Though it may not seem like it at first, Legend of Grimrock does have a story. You begin by either choosing one of four preset characters or creating your own. Other than the opening and closing cinematics, there are absolutely no cutscenes. You’ll never have control taken away from you as you watch your characters act on their own. Instead, when your team is resting, you will begin hearing a voice in your dreams with seemingly useful information. You’re left wondering how and why you’re hearing this voice and more importantly who it could be.

Meanwhile, you’ll be finding notes left all around the dungeon, many written and signed by a single person. These often contain useful information about your surrounding area, recipes, or journal entries from someone who has been in your exact predicament before. At times, you may question just how reliable all of this information really is, but when it comes down to it, these notes and dreams are all you have to go off of.

The story did a great job of keeping me interested and I really enjoyed how well it was told. I never had to read paragraphs of text or idly sit back and watch as a cutscene laid everything out for me. I appreciated that the game allowed me to put many of the pieces together myself instead of holding my hand. There’s also the potential for expansions and user-created dungeons in the future which is definitely something to get excited about. 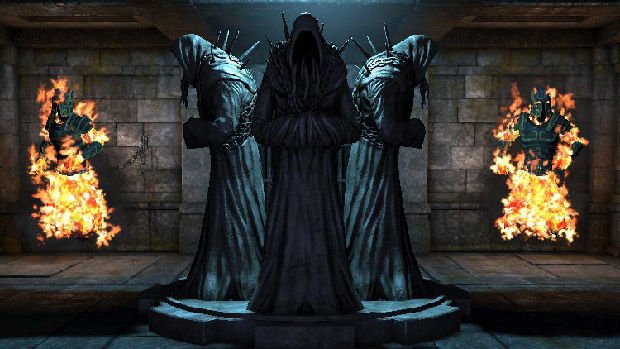 Legend of Grimrock sports tile-based movement combined with real-time combat. The strict movement may be a bit jarring for some people in the beginning, but after an hour or so you’ll become accustomed to it. This type of movement is a clear throwback to the games of yore and really ends up working well within the confines of the game. If there was free movement, then a lot of the puzzles simply wouldn’t work as well.

The combat is pretty straightforward. Your party is set up in a 2×2 grid, with only the front two being able to use melee attacks as the members in the back cannot reach. You can rearrange your party on the fly by simply dragging them into place. Naturally, you’ll want to place any mages or rogues in the back row due to their low health and defense, and place any warriors in the front. In the early game, combat is frantic – you’ll be swapping members in and out, attacking, and then swapping them back in an effort to keep everyone alive. Eventually things calm down as mages learn spells and rogues gain more abilities, but combat never feels boring.

In order to reduce the amount of damage you receive, you’ll want to constantly be moving while fighting.  Strafing and attacking in quick succession is easily the most effective way to approach most of the battles. However, there were plenty of times when I found myself backed into a corner faced with multiple enemies blocking my way.

Something that struck me as a bit odd was the magic system. Not how it works, but rather that it’s not explained in the game at all. In order to figure out how to use the magic casting system, you’ll have to open up the digital manual that comes with the game. All magic is cast by dialing a specific combination of runes. You’ll unlock more spells as you level up, but in order to know what spells require what combinations, you’ll have to either experiment or find scrolls throughout the dungeon. Once you master the system, casting spells mid-fight is incredibly satisfying. 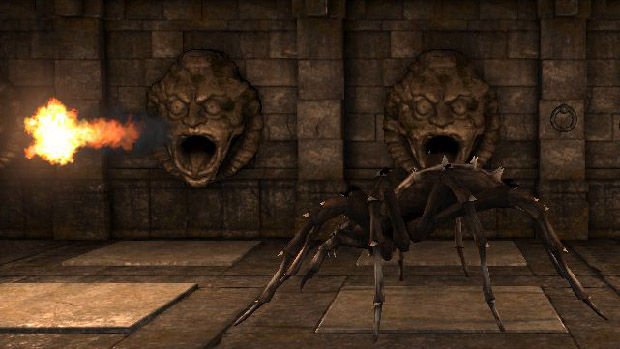 Legend of Grimrock‘s strongest element is easily the puzzles you’ll find strewn throughout the dungeon. I lost count as to how many times I threw my fist in the air and shouted, “YES!” after successfully completing a puzzle. I can’t stress enough how well the guys over at Almost Human nailed the puzzle difficulty.

Most puzzles will consist of you activating pressure plates or finding secret buttons to press on the walls. In some cases, there will be hints written on the walls or in scrolls that you can find around the area. Some are quite dastardly, and required me to break out the ol’ paper and pencil to get a better look at them.

There are also optional puzzles that are way more difficult than what you’ll normally encounter. Occasionally, you’ll come across large iron doors that will take a lot of wit and a keen eye to open. I managed to open about three of these doors in my playthrough, but left many more closed. I felt defeated and I loved it.

The only frustrating moments I had were the few rooms in which I felt death was inescapable on the first try. Some rooms have traps that will unleash a flood of enemies at you, many times with only one way out. Without the knowledge of where and when they will attack, it’s almost impossible to survive on the first attempt. After reloading your save, it becomes significantly easier, but it is a minor annoyance. Now, if I were designing a dungeon and wanted to weed out the weak ones, I would totally build rooms just like this. However, in terms of gameplay, these rooms end up being slightly annoying. 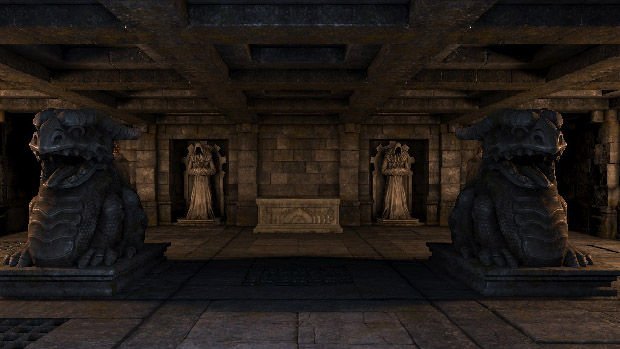 If you’re like me, you might be nervous about the environments in Legend of Grimrock. A lot of the early screenshots and videos show very generic-looking stone walls. In total, there are three types of environments and they change at just the right times. Towards the end of the first section, I was growing tired of seeing the same walls and thought I was going to go insane. It seems as if this was intentional – after all, this is a dungeon. Sure enough, the next floor down had a new tileset for me to get used to and explore. The game thankfully auto-maps the dungeons for you, although if you’re feeling hardcore, you have the option to turn it off. The game even provides graph paper for you in the “extras” folder of your download!

The enemies within the dungeon are quite varied and are equally terrifying. You’ll run into your regular fanfare of spiders and skeleton warriors, but soon enough you’ll turn the corner, see something staring back at you, and immediately turn and run in an attempt to mentally prepare yourself for what you just saw. You really get a sense of character progression, as enemies that took meticulous planning two floors ago are now going down in just a few attacks. Don’t ever get too comfortable, though; a new enemy is likely just around the corner waiting to kick your butt.

Exploration is easily one of my favorite aspects of any game and Legend of Grimrock did not let me down. There are a ton of secrets for you to discover within these dungeon walls. I was scanning just about every inch of every floor to make sure I didn’t overlook any secret switches or buttons. The act of finding secrets and treasures is extremely rewarding, even if the loot reward isn’t always as amazing. 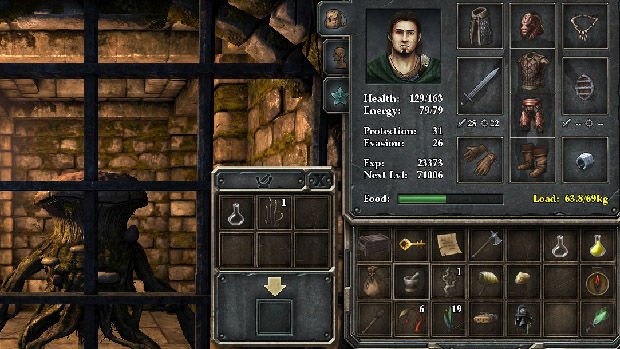 A lot of people bring up Dungeon Master when looking at Legend of Grimrock. I had never played Dungeon Master before, so I went ahead and took a crack at it. After playing it for a bit, it’s clear that they are indeed very similar. However, Legend of Grimrock has all of the conveniences that you’d expect a game to have in 2012, like improved visuals and better UI. If you’re like me and this is your first foray into the world of first-person dungeon crawling, don’t worry! If you are at all interested in what it brings to the table, you’ll have a wonderful and exciting jaunt through this dungeon. While there aren’t many dungeon environments and the occasional “trap” rooms can be a bit annoying, these small issues are relatively minor quibbles when compared to the greater experience.

I have to give Almost Human a lot of credit. The level design, enemy placement, and especially the puzzles are all, by and large, wonderfully crafted. There are a few instances where the “traps” seem more unfair than clever, but that hardly tarnishes what is otherwise a terrific experience. You’ll be hard-pressed to find a modern game like Legend of Grimrock any time soon, but with a game of this quality, you won’t need one.

Oh, and remember to save often.