A gentleman leaves no murder unsolved

Despite my affection towards the Professor Layton series, I felt no compulsion to download Layton Brothers: Mystery Room when it released a couple months back. I’m not against mobile gaming, nor do I believe it’s impossible for a traditionally home / handheld console franchise to make a successful leap into the mobile space. But I’m not so proud that I can’t admit to still being somewhat biased.

And so weeks passed. While flipping through the App Store just the other day, I noticed that the first few chapters of Mystery Room were free. I figured it wouldn’t hurt to give the game a quick spin to see if it deserved my money. Okay game, I thought, convince me!

Mystery Room does exactly what a good spin-off ought to do, which is to craft an experience distinct from yet complementary to the mainline series. With a focus on solving murders rather than “I haff twelve metchsteek” puzzles, it’s less Professor Layton and more Detective Conan — a blend of anime antics and crime drama that works perfectly on a mobile platform. 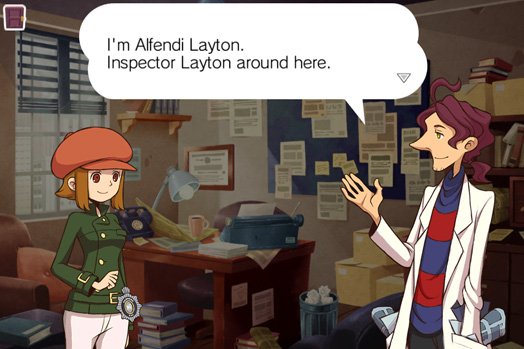 You won’t find Professor Hershel Layton or his young protégé Luke in this new tale, which takes place an indeterminate number of years following the duo’s globetrotting adventures. Instead, you assume the role of Lucy Baker, an eager new detective constable working in Scotland Yard under Alfendi Layton, genius son of the ol’ professor.

Despite the game’s title implying otherwise, Alfendi’s unnamed brother is curiously absent aside from a brief offhand mention early on. Perhaps Level-5 hopes to investigate that particular mystery in a future sequel, but it’s nonetheless an odd naming choice.

Anyway, Mystery Room is split into nine separate “Case Files” (plus a prologue chapter to establish the setting). In each, you must use your investigative skills to examine murder sites and determine the culprit from a small list of suspects. Most cases are unrelated to one another, save for the last few which tie directly into the game’s overarching narrative.

The meat of the game is the investigation phase, in which you use the touchscreen to navigate the crime scene for evidence. Unlike your typical point-and-click adventure, all objects you can inspect will be pointed out via markers. Though genre-savvy players might believe this makes the game too easy, the upside is that it eliminates both the tedious exercise of pixel hunting as well as any fears that you can’t solve a case because of a single missing clue.

After making a list of deductions, you invite the alleged culprit into the office for a final round of questioning; here’s where Mystery Room gets deliciously anime-tastic. Much like the “cornered” sequences in the Ace Attorney series, the culprit grows more comically frustrated as you present evidence that contradicts his or her statements. Their composure is visually represented by a heart encased in stone, and each of your accusations take on the form of arrows that literally chip away at their defense. While the earlier cases are fairly straightforward, later ones feature last-second twists that may point the blame elsewhere. 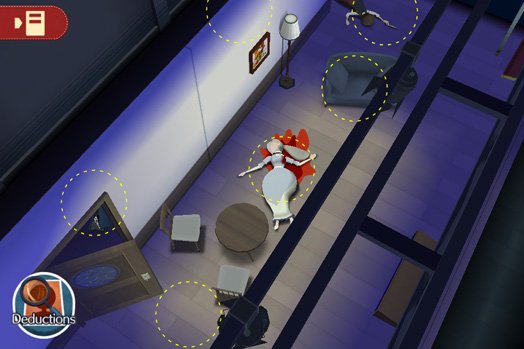 As tense as the game can become, there’s never any danger of failing. Al will gently guide you towards the correct answers early on, but even in the more complex cases, the penalty for presenting incorrect evidence is just to pick again. You’ll never have to replay a section just because of your mistakes, which makes it entirely possible to brute force your way through. However, there is a sense of hearty accomplishment in putting forth an honest effort.

The story isn’t as massive in scope as those of Al’s old man, but that shortcoming is balanced out by a well defined cast. Alfendi himself is a mellow fellow who calculates the percent certainty of his suspicions down to the tenths place, but in the heat of interrogation, his demeanor changes to that of a sinister, sharp-tongued wolf. Lucy of course is the bright-eyed sidekick, anxious to prove her worth despite her lack of experience. Then there are the supporting characters and the criminal suspects, each with distinctive mannerisms and speech. 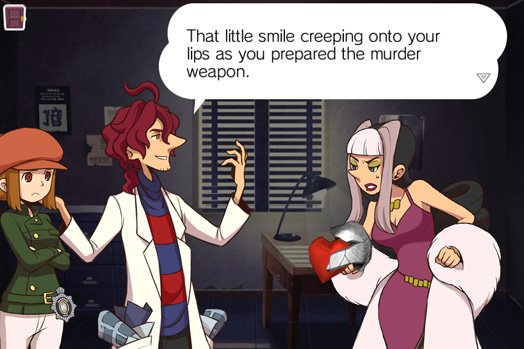 The dialog is one of the game’s biggest highlights. Mystery Room successfully textualizes a range of regional dialects — you can almost hear Lucy’s thick Cockney accent whenever she speaks. It’s such a shame there is no voice acting whatsoever, considering the incredible voice work in the main Layton games.

The other highlight is the incredible jazz soundtrack, produced by famed Streets of Rage composer Yuzo Koshiro. There’s such energy and intensity there, as if you are playing a classic radio drama. Once you start putting pressure on your suspect, the trumpets flare, the drums go absolutely mental, and the player feels completely in control. You’ve got the mind of a super sleuth and have the theme song to prove it!

Mystery Room is also a highly digestible experience. Each chapter feels like an episode of a TV show — long enough that you feel adequately invested, yet short enough that you can easily clear a case in a single sitting. Though there are frequent checkpoints for those who absolutely must quit mid-investigation, the fact that you can tackle a chapter in the time it would take to watch CSI makes the game very inviting. 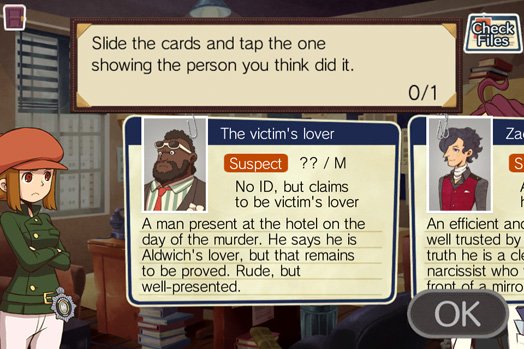 Most of all, there’s something immensely satisfying about putting on your thinking cap and solving a harrowing murder mystery. Even if there isn’t any true risk of failure, the game creates just enough tension that you feel your actions have purpose. Add to that all the window dressing — the bizarre characters, the over-the-top interrogations, the music — and you’d have to be pretty jaded not to have a grand time.

Layton Brothers: Mystery Room is a fine companion to the main Layton series. Unless you really, really miss those Highlights brain teasers, that is.