Last year, Square Enix Montréal surprised us by distilling the Hitman series into a minimalistic mobile game with a tabletop aesthetic. It was a risky move, but Hitman GO ended up a critical success that showed what a studio could do with a known IP and the freedom to experiment.

So when it was announced that Lara Croft would be receiving the same treatment, I was delighted at the prospect of turn-based tomb raiding. I envisioned pulling levers, leaping over gaps, and dusting off long-lost artifacts, all with a veneer of simplification. I got exactly that, but what I wasn’t expecting was just how soothing being Lara can be. 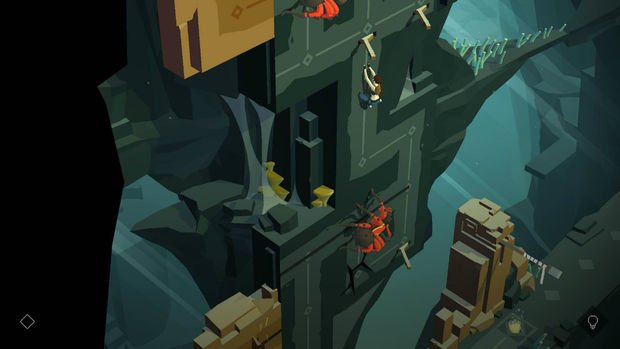 Lara Croft GO immediately establishes itself as a contemplative foray into a forgotten world. Meditative music gently ebbs and flows as Lara slowly walks up to a well-preserved ruin in one of the game’s few brief cutscenes. The environments are vibrantly rendered in a simplistic yet gorgeous manner while gentle camerawork plays with the foreground, asserting a sense of depth. Lara’s expedition takes you deeper into this ancient land, and before long a gargantuan serpent begins pursuing this new trespasser.

Similar to Hitman GO, you can only move along pre-carved lines on the ground and scalable walls, darting from spot to spot. Here, however, Ms. Croft is fluidly animated, doing somersaults and even her famous hand-stand ledge climb on occasion. It’s initially jarring to see her do stilted little jumps between spots (there’s no way to hold down a run button, as that would quickly end in death), but I stopped noticing it just a few levels in. Enemies and obstacles can only move whenever you do, so movement needs to be precise and measured. Unlike early Tomb Raider games, you’ll never die due to stepping a tad too far or misjudging a jump. 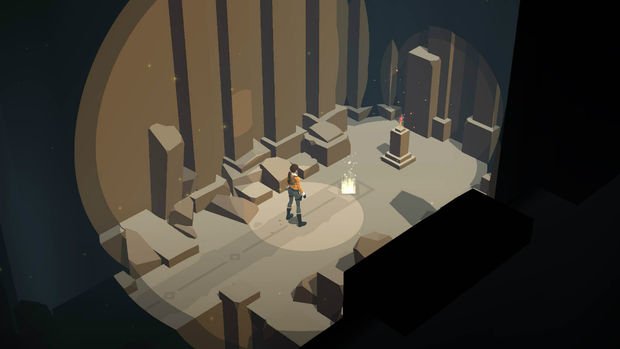 Puzzles start as simplistic fare involving levers and floor panels that can only be safely crossed one time, but add elements every few levels (of which there are 40) to stave off repetition. Snakes, lizards, and giant spiders will do their best to prevent you from reaching your desired MacGuffin and each provide their own set of challenges. You’ll eventually find single-use tools to combat them, such as a javelin and a torch. Then there are boulders, sawblades, and other traps that will make you doubt every step you take.

Since the checkpoints are very forgiving and most levels will only take you a few minutes to complete, dying isn’t discouraging. Death, more than anything, is your most reliable tool when it comes to deciphering the machinations of the deathtraps hindering your progress. You’ll step on plenty of floor panels only to launch arrows into your soon-to-be lifeless body, but it’s never a frustrating affair.

While this is appreciated, the one and only quibble I have with Lara Croft GO is that it never quite feels like it fully ramps up to a satisfying difficulty. Despite a couple of “A-ha!” moments, the slow addition of complications and intensifying music build to a climax that doesn’t deliver. It’s always appreciated when a mobile game can be played in short sessions, but I wouldn’t have balked at being stumped a few times. Perhaps it’s my love towards past installments and the enjoyment of being utterly stonewalled by a puzzle, having to think about it even when I’m not playing. On the off-chance that you every get completely stuck, you can use microtransactions for hints (this feature was not online when I was playing for review). 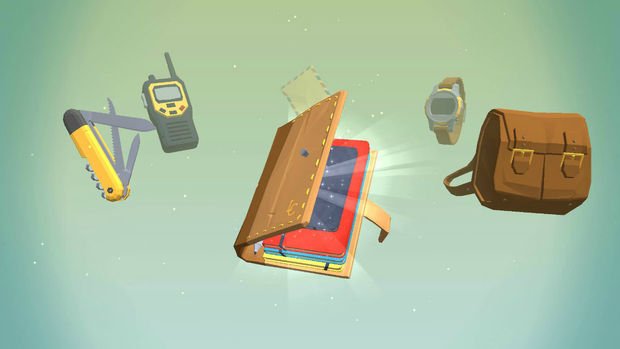 If you miss the older games in the series, you’ll find cute references that aren’t cloyingly nostalgic. The main menu is radial like it was in the olden days of yore, and that satisfyingly reverbed BRRINNGG sound effect denoting the discovery of a hidden treasure has returned. Find enough of those treasures and you’ll even find costumes from the old games, like the wetsuit from Tomb Raider II. This affords Lara Croft GO some replayability (since you’ll be able to finish it in around three hours depending on your skill level), but they aren’t exactly well-hidden until the back half of the adventure.

Though other games featuring Lara Croft have elicited a gamut of reactions such as horror and anxiety, I never expected to find spelunking so calming. The dreamlike soundscapes bring to mind a massage parlor and slowly slipping into sleep as someone caresses your tired feet. This is an easy game to fall asleep to, and I’m almost positive you’ll have good dreams. I don’t think Square Enix is claiming that one solely because of the lawsuits that will occur when players start rolling over and crushing their iPads.

Lara Croft GO is clearly the product of a love for what the Tomb Raider series used to mean. Your pistols are more of a tool than a weapon, and you certainly won’t be killing an island’s worth of men. A lovely visual style and a zen-inspiring score provide backdrops to my favorite Croft adventure in some time. I’m now grateful for the delineation between the action-filled Tomb Raider and puzzle-focused Lara Croft games. Even though I enjoyed 2013’s hectic reboot, sometimes you just want to stop and breathe it all in, tomb dust and all.