One of the pitfalls of being a game reviewer is I’m always trying to find a deeper meaning to the titles I review. If I were a book reviewer, or a film or TV reviewer, this would be an easier task as one expects to find imagery and hidden depths in almost every piece of fiction presented in those formats. As a game reviewer, one of my goals is to be taken as seriously as reviewers of other mediums, which is why so many times I run a fool’s errand trying to find meaning that isn’t there, to create cultural links that just don’t exist.

There are many games that are certainly ripe for deep dives and carefully researched retrospectives, but some titles exist only at a surface level. And there is nothing wrong with that. Not every game needs to be a protracted exploration of a half a dozen themes and motifs. Sometimes, we just want to pick up a controller and tear shit up. And Lapis X Labyrinth is a game tailor-made for tearing shit up. 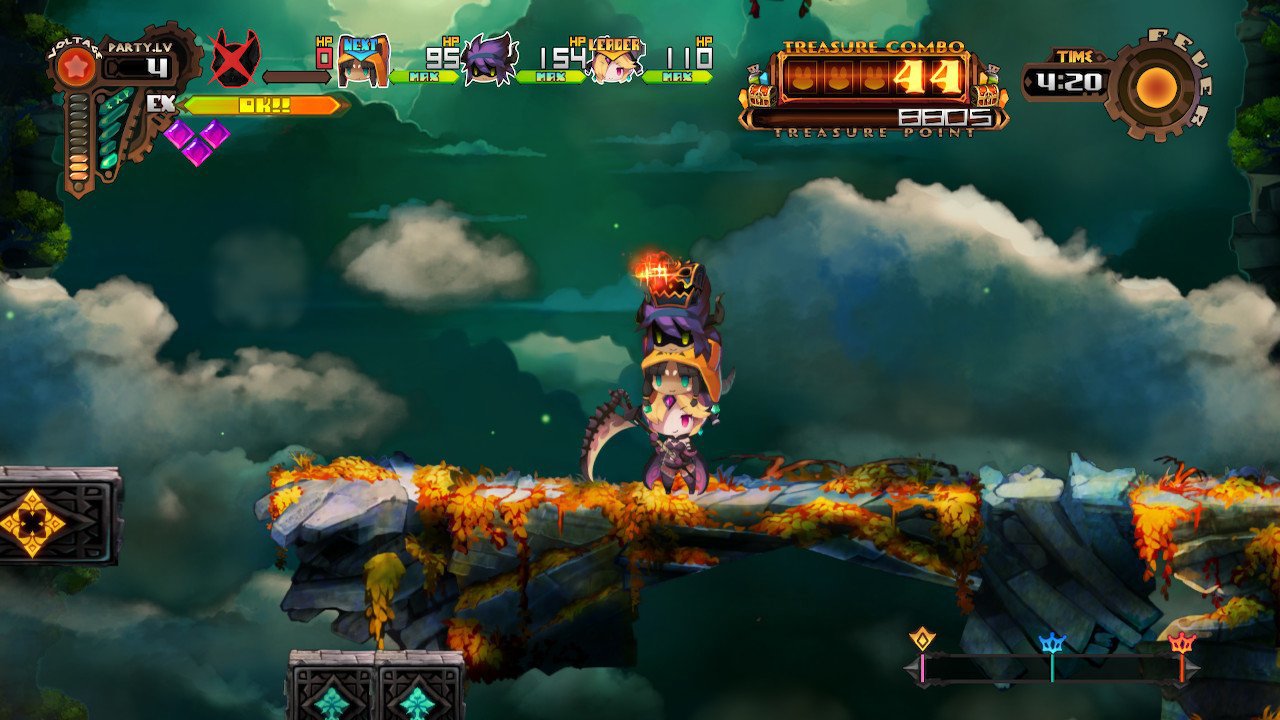 Lapis X Labyrinth — which you pronounce simply as “Lapis Labyrinth” — tasks players with creating a troupe of heroes to help revive a town on the brink of collapse. The village used to be ground zero for adventurers looking to explore the labyrinth. Now, it’s a loose assortment of buildings with a population deep in the single digits. There isn’t much exposition here but it’s enough to give meaning to the game as well as some of the restrictions it places upon you.

A short tutorial sets up everything you need to know about how to beat the dungeons you’ll face. Lapis X Labyrinth is a side-scrolling action RPG that sees players exploring dungeons with a team of up to four party members, stacked on top of one another. The character at the bottom acts as the leader while the others are support characters, coming into play when you switch them into the leadership role or when you use one of the support functions. The game has three different attacks: a general melee attack, a special attack, and a support attack. The special attack will change if you use it in tandem with a directional input and the support attack depends on which character class it is being thrown into the mix.

There are eight character classes in the game, including hunters, maids, priests, witches, and gunners. Each features a limited but versatile array of special attacks, though in the heat of battle I found ranged characters like the gunner to be less reliable. For Lapis X Labyrinth, I liked to be right up in the action. With the variety of enemies that are found in the game, from fire breathing dragons to spike slimes, there is a much greater chance of success if you can get right-up close before striking them down.

The gunner, as well as the priest, serves a better role as a support character, especially when you power up a group attack. When this meter is fully charged, pressing the R button sends your support characters flying into a coordinated attack utilizing an additional move known as an Extra Order. These differ from the regular support moves and, depending on your team, not only will this do massive damage to the mobs around you but it can also provide much-needed healing to your team.

While the overall goal of the game is to revitalize this town, you’re mostly in it for the treasure. Lapis X Labyrinth has treasure in spades. There are coins, gems, chests, and supplies to collect and it’s not uncommon to wrap up a dungeon run with more than 200 pieces of treasure added to your collection. Taking down foes without suffering damage results in greater rewards and when you unlock Fever Mode, which you will multiple times in each dungeon, the screen will burst into a kaleidoscope of colors as gems fall out of every enemy and block you smash. If you’re worried about the game starting to chug with so much happening on screen at once, fret not. The Switch version holds steady in both docked and handheld mode.

For the last two weeks, I’ve been using this game as something to unwind with after a day at work. The combat isn’t anything with any particular depth as there isn’t a tactic required more complicated than smash anything that moves. Chaining melee combos, special attacks, and support attacks is visually brilliant and gets the job done, but there isn’t a strategy I employed at the end of the game that I didn’t develop at the beginning of it. That includes boss battles as they don’t put up any more of a challenge than the standard creatures I killed to reach them. I imagine some people might be turned off by how shallow the game can be, but I find it cathartic. As I said in the lede, sometimes you just want to tear shit up. 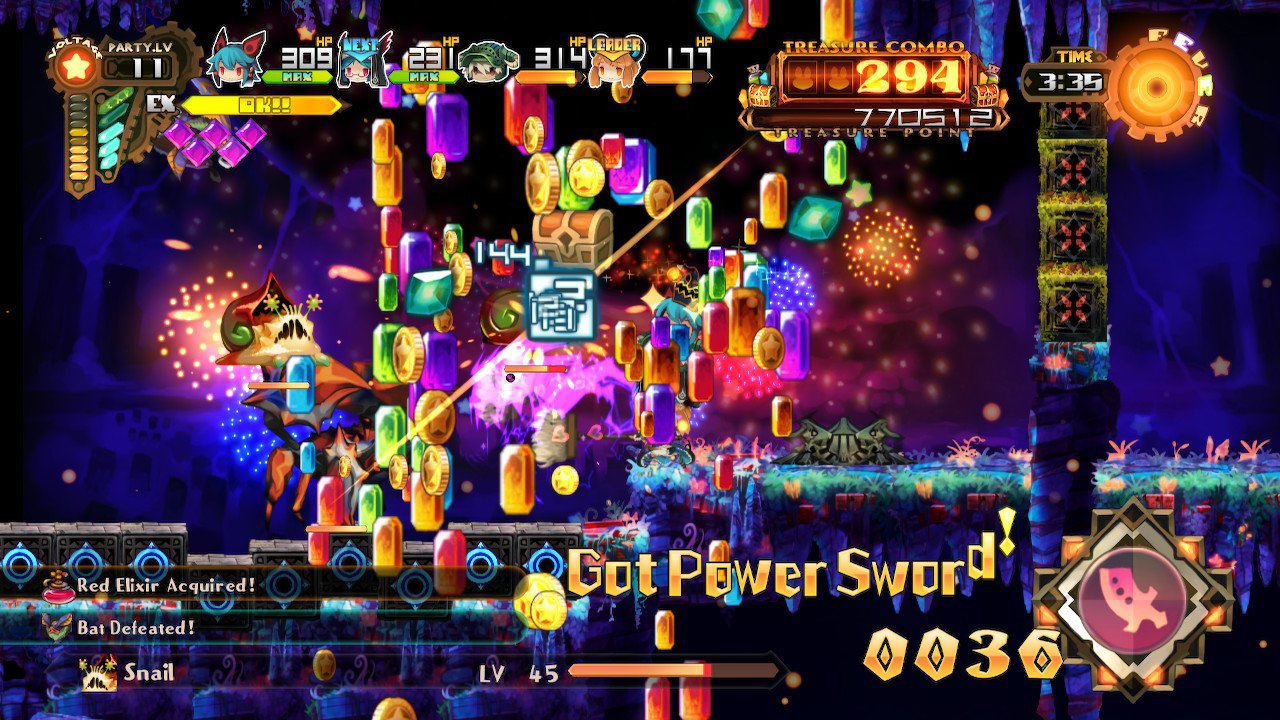 In Lapis X Labyrinth, that means tearing shit up in quite beautiful backdrops. The art direction NIS employed works well. Creature designs are bright and unique, and each of the dungeon themes is varied enough that reaching a depth in the labyrinth genuinely feels like you’re entering a new world. Unfortunately, that feeling doesn’t last as the game frequently reuses areas as if only a handful of levels were made and NIS is trying desperately to pad the playtime as much as it can. The electronica soundtrack is catchy as hell, though Fever Mode music does tend to interrupt it.

While I find it to be endlessly arresting diving into dungeons, killing a bunch of creatures, and getting that loot, some undercooked aspects of Lapis X Labyrinth pull the rest of the experience down a bit. For starters, as much as I love getting loot, the randomization of the loot system sucks. At the end of each successful dungeon run, you’ll be able to unlock chests you’ve collected with keys you’ve earned. Each chest will contain either a different weapon, artifact, or piece of armor you can equip to your team. Unfortunately, there is no guarantee the chest you unlock will have decent loot and the chests are presented to players in a randomized order. That means if you grab a super rare chest, you might run out of keys before it’s an option for you to unlock it. Of course, if you do manage to open that super rare chest, it might contain a weak weapon that you’ll never use. Them’s the breaks.

Loot collected can be sold or traded to improve your characters, but Lapis X Labyrinth doesn’t do nearly enough to thoroughly explain how this works. There are short descriptions, but most of the functions of the game are left for the player to just figure out for themselves. It’s not a huge deal-breaker as the title isn’t that deep, but it would have been nice if the developers put a little more effort into explaining the different systems of the game, or having a more complete resource for curious players wanting to better understand everything here.

But it’s easy to ignore those complaints when the core gameplay is this fun and flashy. I went into Lapis X Labyrinth expecting a breezy dungeon crawler and that’s exactly what NIS delivered.