Where the blimps all run on Aethericity

Point-and-click adventure games had a bit of a renaissance in the last decade, but have become harder to find ever since Telltale discovered a different formula with The Walking Dead in 2012. Luckily, indie developers are there to fill the void for folks who still like walking into a room and poking at everything they see.

Lamplight City is a new adventure game from the creator of Shardlight, and offers a unique twist on the familiar detective stories frequently used in this genre. Like old LucasArts games there’s never a failure state, but that doesn’t mean the main character can’t mess things up for himself. It’s up to you whether you prefer to play the character as a competent detective or an irredeemable screw-up, and it’s pretty interesting exploring different paths to see how things turn out in both cases. 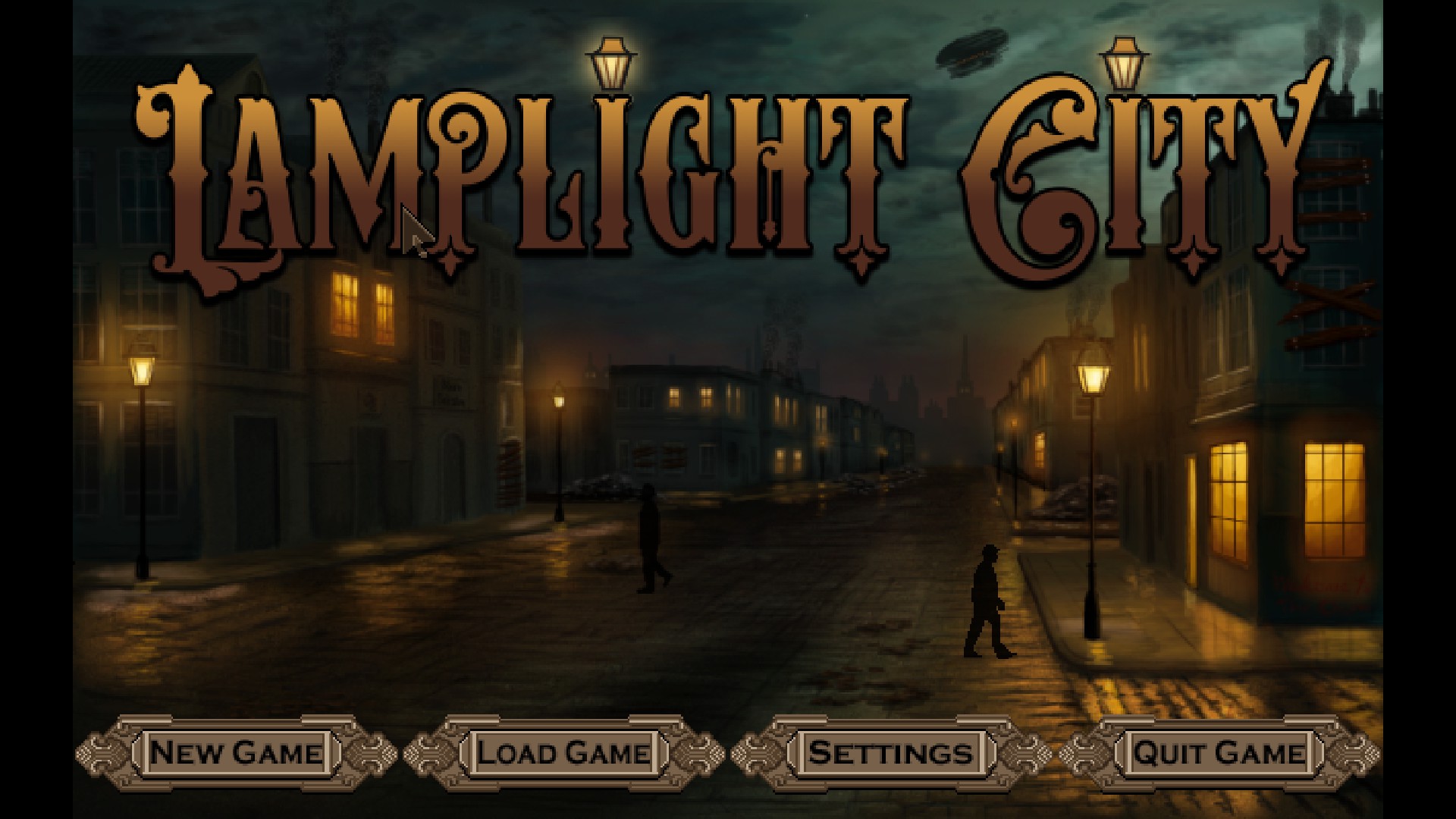 Lamplight City is set in an alternate-history United States where the country took the last name of Amerigo Vespucci rather than the first. The time period represented is the mid-1800s, and since Vespuccia never had a Revolutionary war, it’s still a British colony. On the plus side, that means slavery was abolished in the 1840s. Steam technology is the apex of human ingenuity, but it’s not especially widespread and largely limited to the wealthy and powerful. There’s talk of a new power source called Aethericity, but most residents of New Bretagne still make do with gaslights and candles.

You play as Miles Fordham, a detective with the New Bretagne police department. Although Miles and his partner Bill Leger have an excellent record, they’re being assigned to low-profile cases due to internal politics. While investigating a flower shop burglary doesn’t seem like a great use of police resources, Fordham and Leger take the case seriously and stake out the culprit. Unfortunately, the case takes a turn for the worst and no matter what you do, Bill ends up falling from the roof and dying in front of you.

Death is not the end for Bill, however. He manages to hang on as a spirit only Miles can hear, and acts as sort of a narrator for Fordham’s inner voice. As a gameplay device, he serves as a way to describe what you’re looking at without having the main character talk to himself constantly. Bill has a snarky streak, so his monologues are usually pretty entertaining.

Unfortunately, spirits don’t need rest, and Leger’s constant chatter keeps Fordham awake at night unless he resorts to chemicals to drown the voices out. We rejoin the pair three months later. Fordham has been kicked off the force and is addicted to a sleeping drug, terrified of letting the world know his secret for fear of being thrown in an asylum. He hasn’t worked since the incident that resulted in his partner’s death, and his wife’s patience is becoming strained. Fortunately he still has some friends on the force, and one of these begins feeding him cases on the sly. 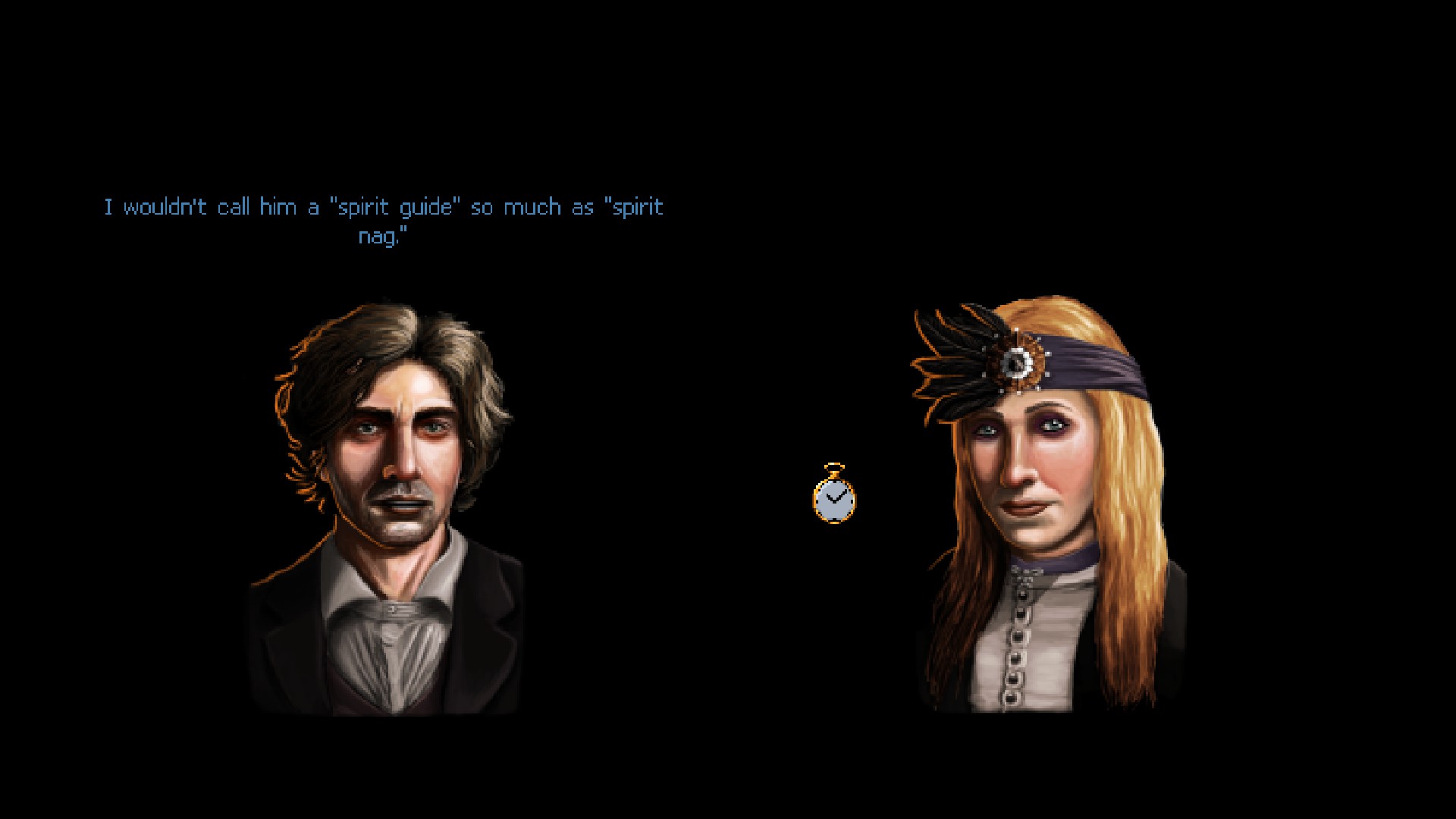 Gameplay is pretty standard point-and-click fare, though there’s much less emphasis on using an inventory than there is on talking to people and learning their secrets. There’s a casebook which will provide some hints about what you’re meant to do next, and there are usually a few threads to follow, some of which lead to dead ends or red herrings. The really interesting idea behind Lamplight City comes from how you deal with these false conclusions.

There are some challenges on each case that are possible to fail outright, locking out potential witnesses or causing you to miss a vital bit of evidence. This doesn’t end your game, but may keep you from discovering the ultimate truth of a situation. Once you collect enough evidence to make a case against a suspect, you have the option to end that case then and there. You don’t have to do so and are free to keep digging, but if you’re a lazy detective you can throw up your hands and point the finger at the most likely suspect. The game continues, and the choices you’ve made and the people you’ve met on prior cases are taken into consideration when you take later ones. 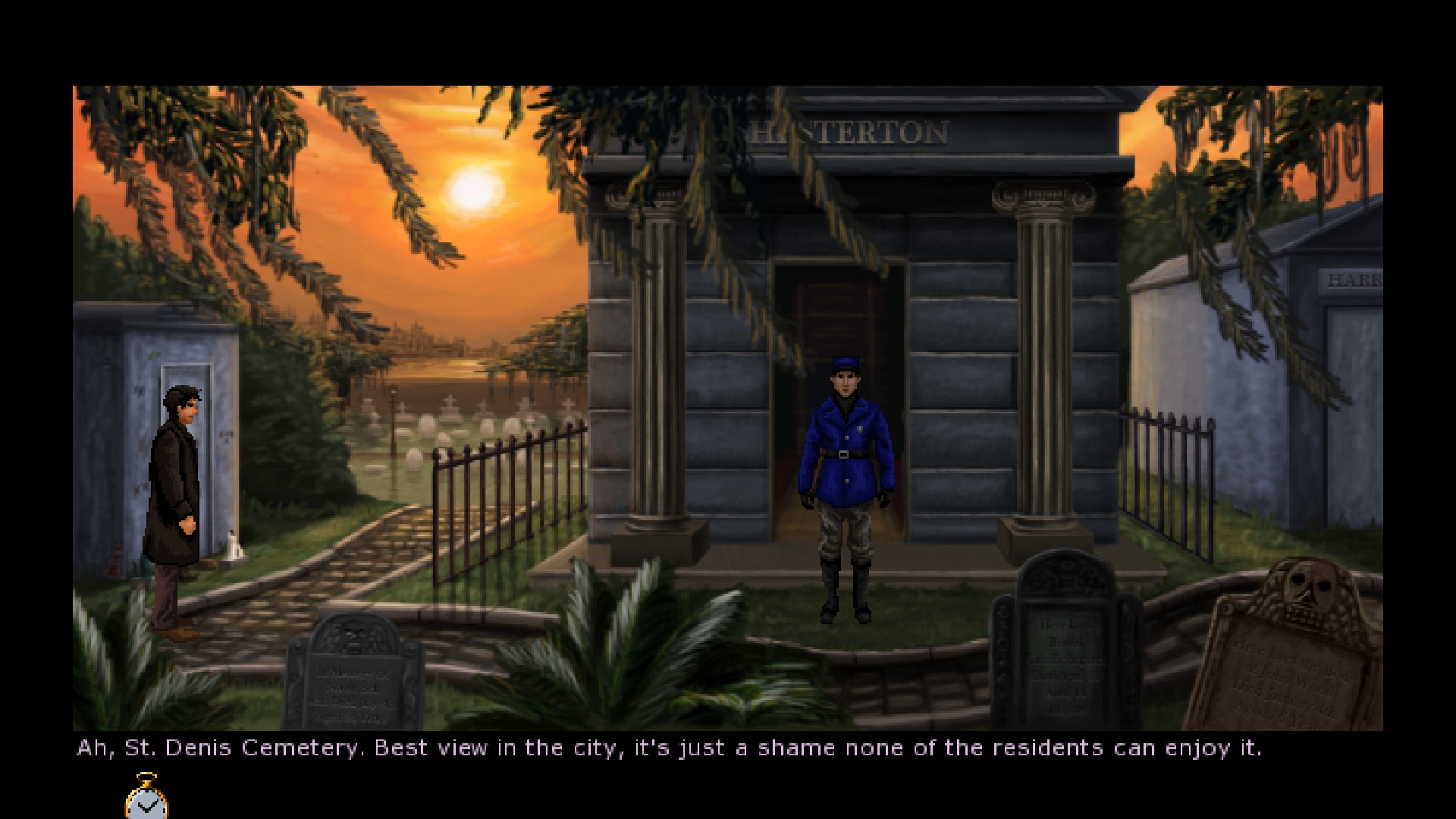 Lamplight City‘s aesthetic is heavily influenced by early Monkey Island games, and the character models and text that appears over characters reminded me strongly of that series. Dialogue between characters is handled in a screen that resembles the Codec in Metal Gear Solid, with both characters speaking their lines as a bust on one side of the screen. The speaking sections have an impressive lip sync effect applied that matches the spoken dialogue to the character portraits. Every line is voiced, and I thought the voice acting was pretty good, though I did find myself clicking through it when I wanted to get on with the story. The music and sound effects are also quite good, reminding me of the audio in the Robert Downey Jr. Sherlock Holmes movies.

Be advised: New Bretagne is more progressive than you might expect, but there are still some folks in the city who don’t approve of Miles’ lifestyle or use some racial slurs. Black and gay characters are represented fairly, but intolerance in the 1800s was the rule rather than the exception. No one uses the N word or anything, but black characters are called “Sambos” by some of the less enlightened citizenry. To the game’s credit, the main character is part of a (mostly) happy interracial marriage, and his partner is a woman of many talents. 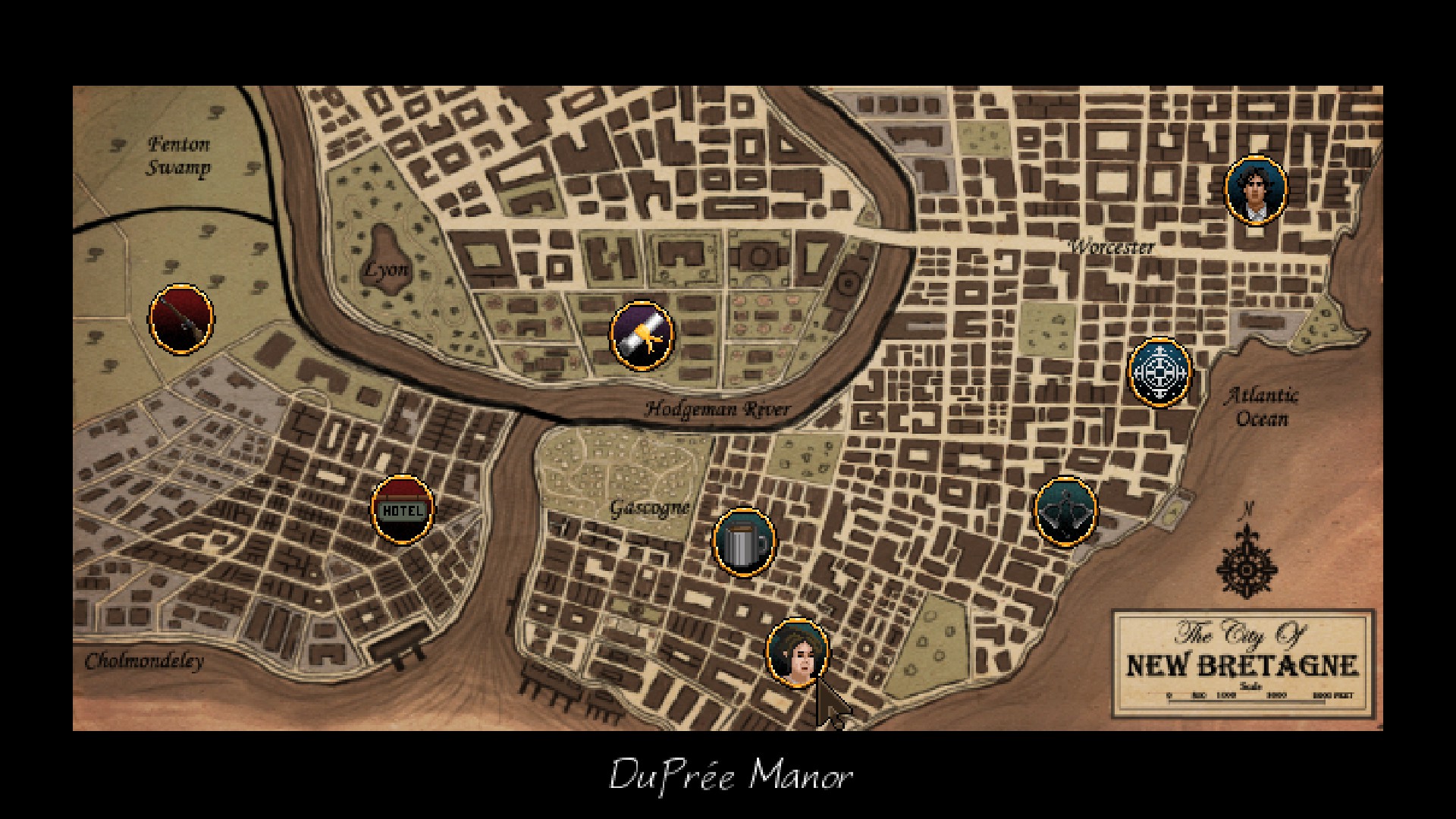 I didn’t have any trouble with glitches or other hangups, but did get stuck for a while on the fourth case when I didn’t notice a storm drain near the site of a murder contained an important clue. There’s a little bit of pixel hunting necessary to discover all the facts about a case, but for the most part it’s fair and you can make progress by retracing your steps and talking to everyone you meet about what you’ve discovered. What’s more, screwing up an interrogation means failure is always an option, and you can choose to pin the crime on the wrong suspect if your case against the right one falls apart.

Lamplight City offers an intriguing set of mysteries and stands as a great throwback to titles like Monkey Island and Sierra’s Gabriel Knight series. The cases aren’t especially taxing, but the well-realized setting and characters add plenty of flavor and help the game feel like something more than the sum of its parts. Fans of classic adventure games should definitely give Lamplight City a look.