Move along, nothing to see here

At first glance, the potential for LA Cops to be an interesting title is great. A top-down shooter in the style of a retro cop squad drama, its main appeal lies in the combination of real-time action with teamwork management, one player using two characters to systematically take down a criminal enterprise.

It’s just too bad that one of those cops always has to be Barney Fife. 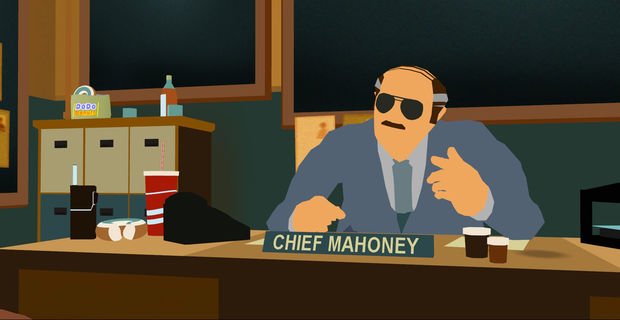 LA Cops attempts to evoke American police fiction of the 1970s through a number of recognizable tropes. Vignettes preceding missions include the beleaguered police chief trying to wrangle loose cannons, cops willing to go outside the law for justice, and even a nod toward gender integration conflicts as a female detective joins the squad. These touchstones are there but never thoroughly explored, winding up as little more than weak references to the genre.

It doesn’t help that the cutscene content is shoddy. A simplistic plot somehow manages to be a bit confusing, as half the scenes set up character conflicts which see no expansion or satisfactory resolution while others introduce key characters without any clear exposition to give the player a reason to care. Dull writing is performed with stiff voice acting across the board, falling emotionally flat in nearly every example. Worse yet, all such content sounds as though the actors wore buckets over their heads for the recording sessions.

Missions play out from a top-down perspective, with players using two detectives to raid buildings and dispense justice to occupying criminals. Vastly outnumbered and easily killed, the idea is that the player is to use these characters in tandem by directly controlling one and issuing move orders to the other to even the odds. The most basic strategy for this is ordering the inactive cop to move in and then timing movement of the controlled cop to enter at the same time to clear rooms in a hail of bullets. Another option would be to position one cop on a blind corner, then assume control of the other cop and use them to lure enemies into a trap.

It doesn’t seem to matter which approach is used because AI controlled partners are, to put it mildly, inconsistent in their combat abilities. A vision cone shows which direction the partner is focusing their attention, but that doesn’t mean they won’t whip around and tag a guy running up behind them. They might. They might not. It also doesn’t mean that they’re any more likely to immediately shoot enemies within range and line of sight. It could happen, sure, but they could also just get gunned down by enemies who have walked right past a corner into the cone before pulling off a shot.

Trying to use both cops through the entirety of the game, even the halfway point, is miserable. Despite warnings that players won’t get very far without their partners, it’s actually much easier to work through levels one cop at a time, treating the stationary partner as an extra life because using both cops is basically just asking for one of them to die. But by eschewing the tandem strategy, LA Cops becomes just a game where the player moves from room to room picking off enemies before they can shoot back and there are much better examples of that gameplay to be found elsewhere. 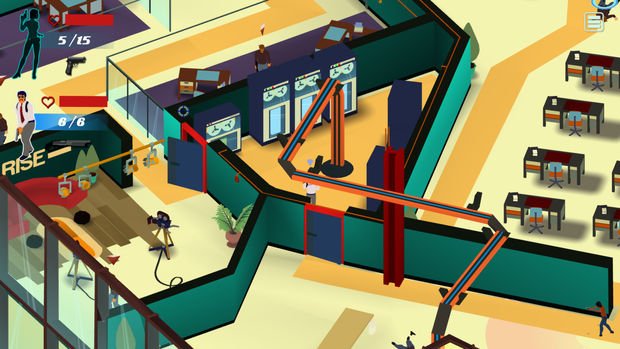 Worse, the scoring system used to determine performance runs totally counter to the teamwork mechanic. Aside from being shot, criminals can also be arrested with a melee attack which renders them harmless. Arresting earns twice the points of killing, but there’s no good way to do it using both cops because the AI might just shoot the nearest crook before they can be arrested (or not, whatever). It’s as if LA Cops is actively encouraging the player to completely ignore its main selling point which, in light of how that’s worked out, might be just as well.

At least there’s plenty of it. There are nine “story” missions with an additional five unrelated bonus stages and three difficulty settings. Nearly all contain multiple floors, and there are some secondary objectives which at least attempt to offer some variety. The more interesting missions include waves of enemies coming in from specific points on a floor or civilians to avoid shooting, but other tasks like reaching a hostage within a time limit (irrelevant since it cannot be achieved before dealing with all criminals on the floor) and the usually pointless destruction of environmental objects just feel like time wasters.

There are six characters the player can select from to complete missions. While they differ at the outset across four statistics (speed, health, damage, and clip size), they’re ultimately all the same due to the experience progression system. Completing missions earns XP which may be spent to increase individual stats or unlock new weapons, but all characters have the same potential and can gain access to the same guns, making there no reason to choose one over another apart from aesthetic appeal and little reason to switch to new characters once experience has been spent on those who have been used before. 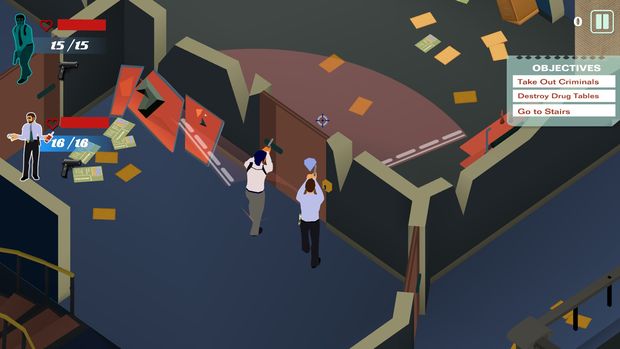 The pop minimalist art style of LA Cops is probably its most redeeming quality, sadly. Clean lines and high contrast colors make it stand out in the field of top-down shooters, and this design serves the gameplay by making it easy to pick out enemies and objectives. The visuals and the soundtrack, which consists of funky guitar tracks that fit neatly with the themes, are about the only elements of the game that aren’t actively working against it.

While there was clear opportunity in the buddy cop formula LA Cops attempted to create, the end result is a mess. Totally undermined by poor teammate AI, the central strategic hook is lost, resulting in a bland game confused about what it wants the player to do.