Now you can be an asshole in first-person

I’ve made my love for L.A. Noire very clear. Sure it’s flawed, and presents itself as an open world game when it’s really not, but the character interactions and camp really make it.

Team Bondi (and its cast) put in so much effort into every single performance, from the animations down to the delivery of the lines. It’s even more noticeable in VR, even if it’s presented in a truncated format. 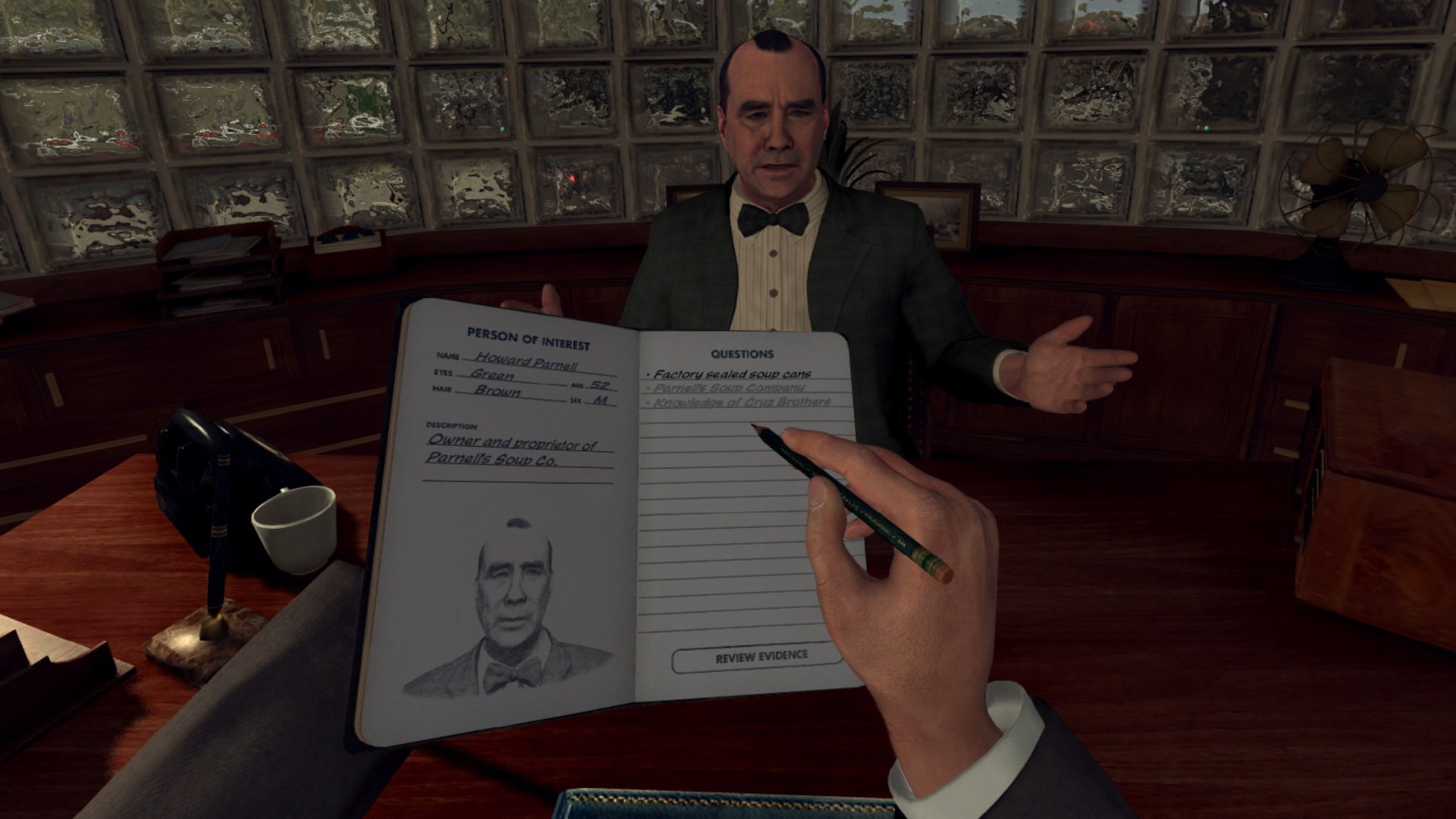 To be clear, The VR Case Files consist of seven missions from the core game, re-purposed for virtual reality. Some scenes are still going to be in third person for cinematic reasons, but for the most part, you’re once again donning a dapper suit and cap and playing as flawed detective Cole Phelps. Each case is just as engaging as it is in the core story, and this VR rendition is basically a “greatest hits” of each crime archetype (desk).

While the jump to VR might seem jarring, the tutorial does a great job of onboarding us as prospective crime solvers. It’s easy enough to grab and grip items, from coffee mugs and comic books to shotguns, and you can use several movement systems — one of which involves pointing to where you want to go and then instantly warping there (though I prefer the silly method of swinging the remotes like hands to propel yourself).

Grabbing things feels impactful, as does punching, dodging (which can involve staying in cover during shootouts, hope you have a big room), and gunfights. I really wish I could experience the latter with the Oculus Touch’s more receptive trigger feedback and responsiveness, but the Vive controllers do the trick well enough.

In part this is Rockstar’s doing, as they’ve added a number of shortcuts for actions like holding and pumping your shotgun with two hands through optional “grip toggles” that don’t require you to constantly hold down a button to grip an item. The development team has cleverly made VR Case Files as accessible or as involved as you want. The “Good Cop, Bad Cop, Accuse” system is still in from the updated edition, which, while more direct, is a little too direct for my tastes (a lot of people hated it, but I liked the vagueness of some of the questioning options in the original). 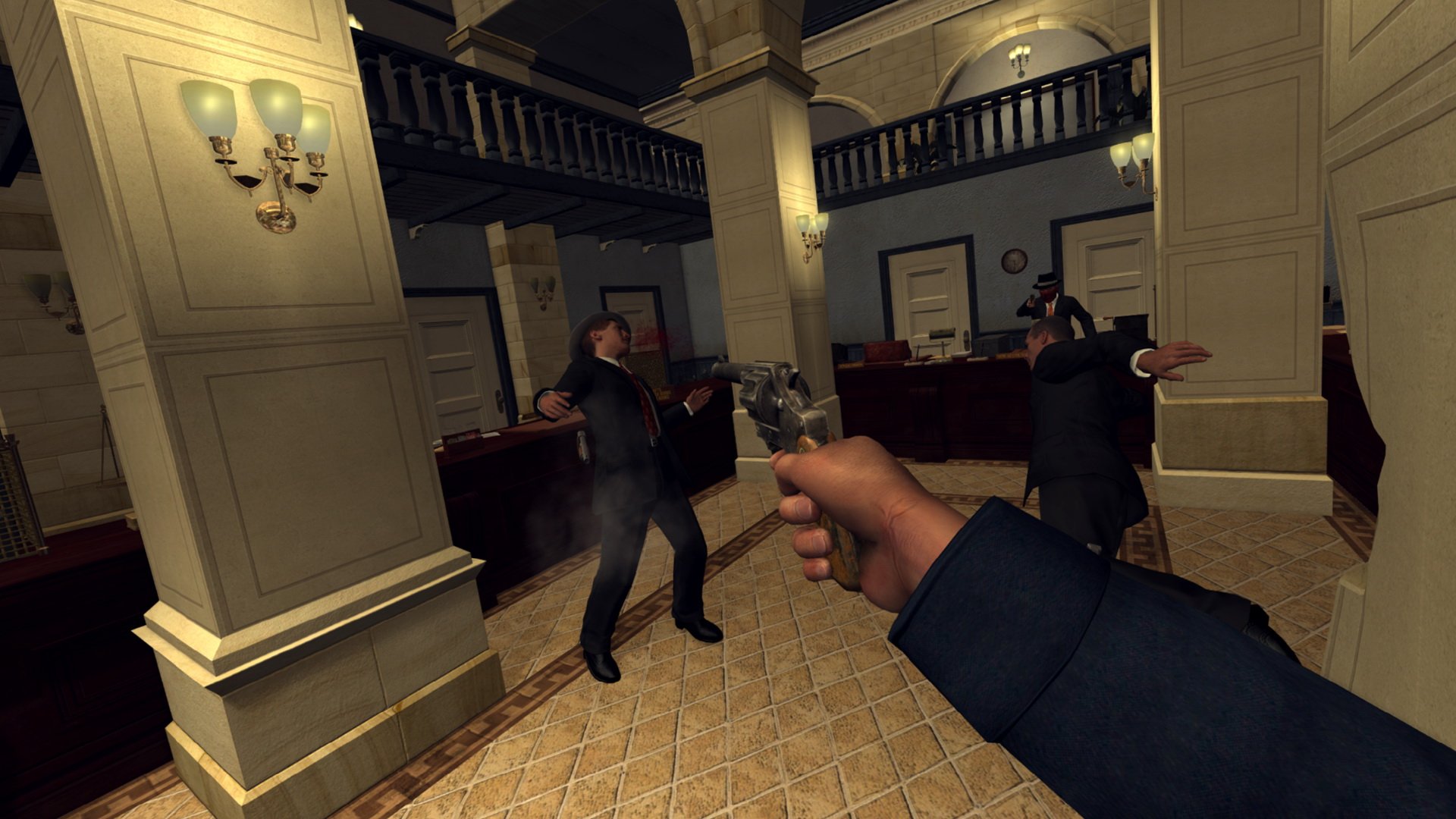 When it comes to gestures and the subtle VR changes, some of the wonderfully campy moments are actually enhanced by the ability to point fingers and draw old timey glasses/beards on suspects in your journal with a pen in your right hand. Even though I’ve played through L.A. Noire several times since its release I found myself nosing around the notebook more often because it was so easily accessible and real. This video, specifically from the 12:00 mark in, is why I love VR Case Files so much.

Driving, a relatively rote activity in the standard versions, is also elevated. I’ve played a host of driving games in VR, but the chill sandbox format really helps make it more fun here. I love leaning out of my window to see if there are any incoming cars behind me, physically honking my horn at putzy drivers, and bothering to obey traffic laws. If you absolutely hate the idea you can also skip driving entirely (again, another win for accessibility). It all adds to the open world vibe — and I do mean vibe, because L.A. Noire was never about frolicking around its relatively empty sandbox.

My only real complaint about L.A. Noire: The VR Case Files is that I wish it was longer, and that it was available on more platforms. It’s not going to magically change your view on Noire as a whole if you already didn’t like how the original played out, but it makes an excellent case for VR conversions, and I see a bright future ahead of Rockstar if they can pull this off again.

[This review is based on a retail build of the game provided by the publisher. GIF source.]