For as strange as it is, Kyuiin is a lot of fun. It’s been a long time since I’ve popped in a new game and found myself drawn in so much that I tried to complete it in one sitting. Tried being the operative word here. It starts out easy but quickly ramps up to be so hard that you’ll end up sucking more than the vacuum cleaner.

Kyuiin is one of those shmups that isn’t trying to be cool or flashy. It embraces cute and weird, and it lets you enjoy how different it is from the rest before it throws you into bullet hell. Still, its a cute bullet hell. This horizontal shooter from the mid 1990’s throws the player right into a storybook world where you play as a boy that flies on the back of a flying vacuum cleaner. It’s best if you don’t ask why.

There isn’t much of a story in Kyuiin. A nicely animated intro movie (shown above) shows that a boy named Hiro and his little sister are really into cleanliness. They were hanging out at home one day, cleaning and reading story books until a fairy pops out of a book and drags them into it. And their vehicle of choice to fly around and save the kingdom on? The ol’ Hoover, of course.

The odd vehicle choice makes for some neat twists on the standard shmup. Aside from the standard fire types (standard vacuum shot, a laser, homing missiles and a rapid fire beam), the front of your vac-mobile features a dangling hose. Run it close enough to enemies or their projectiles and you can suck them up instead of shooting at them or dodging them. You’ll earn points and power up a special beam weapon that can be used to clear out anything. The vac also provides limited rear defense with hits retractable power cord. Tapping the square button lets you flick the cord behind you to knock out rear approachers. Somehow it’s very satisfying to do this.

The setting and enemies are what makes this game so funny. It’s like every storybook rolled into one, with plenty of Japanese randomness thrown in. Enemies can be anything. I saw manly angels, fat birds, fruit, snowflakes, angry frying pans, gas lamps with faces, and just about everything else. Princesses, toads, wicked witches and more are what you’ll find as bosses at the end of each stage. And they’re all as beautifully presented and animated as they are strange. The levels are also quite nice looking for a PSOne game from 1996. I’m surprised I noticed any of this with how busy this game keeps you, though.

The first couple of levels are pretty easy, but after that it’s a bullet dodging extravaganza. There’s weird shit flying everywhere! This game may be cute, but don’t let that fool you, because it’s also pretty difficult, even in the game’s easy mode. You’ll really have to keep a sharp eye out with all the busy projectiles and crazy, multi-jointed enemies flying about. It manages to be hectic and lively at the same time, which really kept me drawn in for my first play session. That session lasted about six hours, if that tells you anything. 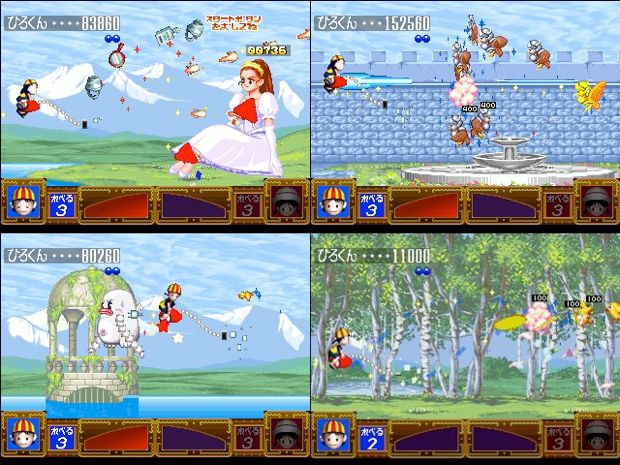 Kyuiin is something of a lost gem, now found and cleaned up for the PlayStation Network’s import section. The game’s strange art and kid characters may put you off at first, but the gameplay itself is tight, challenging and really satisfying. And I’m not sure if it’s intentional or not, but the game is also hilarious. Shooting multi-jointed tomatoes while dodging 30 tiny, sparkling projectiles may not be for everybody, though. That said, if you’ve got a friend and a second controller, this title’s two-player mode will make for a very entertaining afternoon…and long evening, if you suck at shoot-’em-ups.

Kyuiin is a game that I didn’t know I needed until I played it. I think you’ll feel the same after you try it. Highly recommended for shooter fans that want something a bit different.