Fun, but it ain’t funny

I played the majority of the original Knights of Pen & Paper on various toilets within the boundaries of Southern California. It was an enjoyable if shallow take on pen-and-paper RPGs with some cringe-worthy, referential humor and light combat.

Though I wasn’t too familiar with actually playing traditional RPGs back then, I’ve now invested entirely too many hours into the 5th Edition of Dungeons & Dragons and Star Wars: Edge of the Empire. With all of this new experience, I’ve gained a deeper appreciation for what Knights of Pen & Paper 2 is trying to accomplish.

The humor still sucks, though. 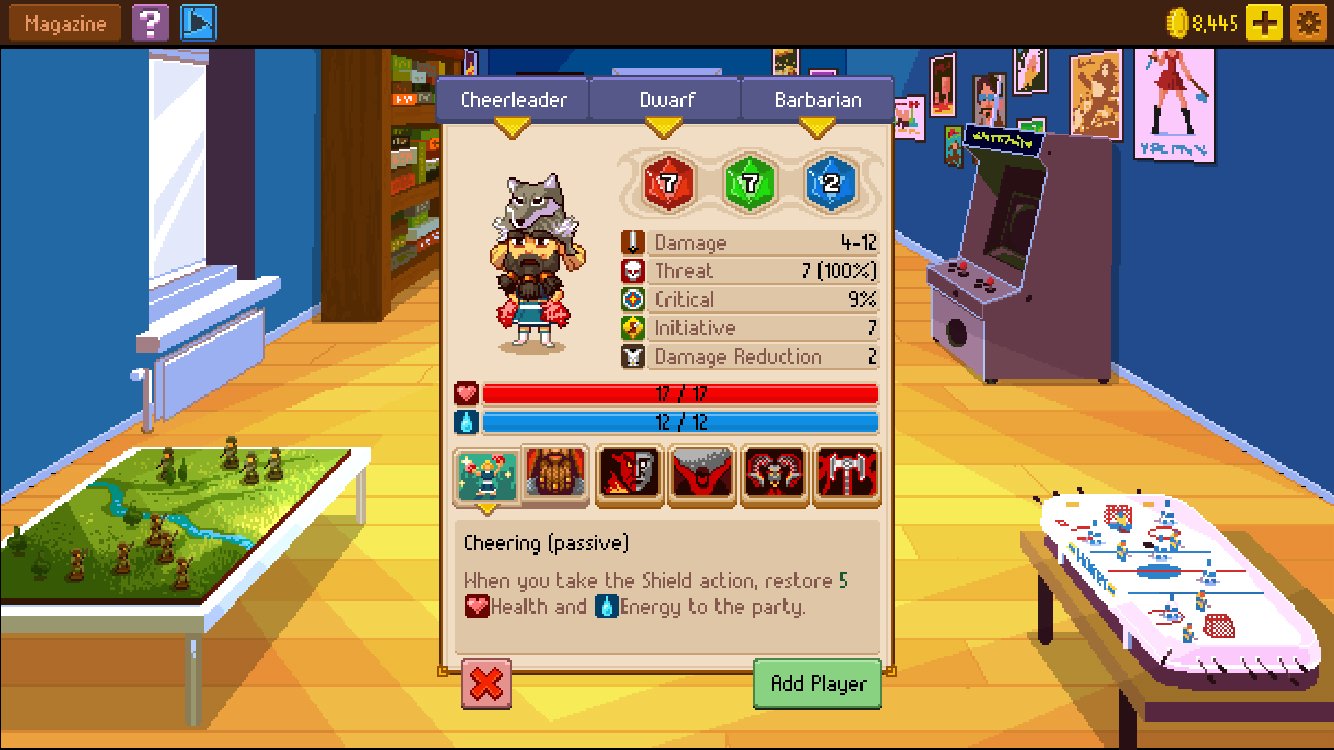 Knights of Pen & Paper 2 takes the concept of tabletop gaming and squashes it into something that fits comfortably in your pocket. Miniatures, character sheets, and multiple reference books aren’t required to enjoy the world of Paperos. Instead, you’ll play as both the dungeon master and up to five adventurers. As dungeon master, you will set up encounters, choosing where your quest will lead and how many/what type of enemies the adventurers will fight. Adventurers must be created by making choices in three different categories: the player’s high-school archetype, their character’s race, and their character’s class. Each choice factors into the adventurer’s combat prowess. That’s a picture of my cheerleader dwarf barbarian up there for reference.

The core stats are now based on the three 20-sided die you see above: red is body, green is senses, and blue is mind. Body determines damage, threat, and how quickly you shake off status effects. Senses is in charge of critical hits, initiative, and attribute rolls. Mind rolls affect health, energy, and your success when you try to investigate an area to find secret items. It’s always satisfying to watch these little dice roll, and I’m glad to see they made the stats a bit more clear this time around.

After assembling your party, you begin your quest to stop the Paper Knight, a player who is using the 2nd edition of the role-playing game against the wishes of the dungeon master. The residents of Paperos are suffering from the clashing of the 1st and 2nd editions and it is up to you to restore the balance. Having any familiarity with how drastically different editions can be between actual tabletop games goes a long way towards how much you’ll get out of Knights‘ plot. 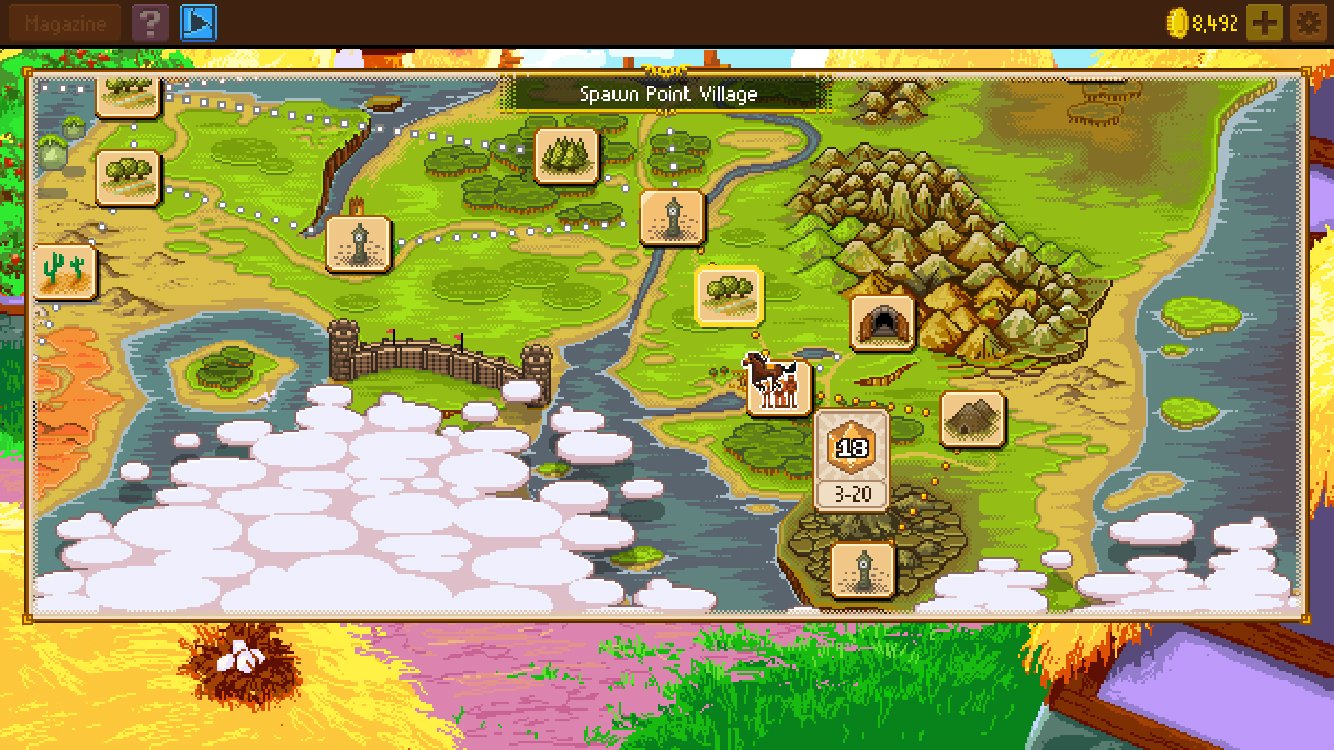 To reach the Paper Knight, you’re going to be fighting all manner of beasts ranging from lowly snakes to sky pirates. The turn-based combat has been beefed up since the first game, where the tactics mostly boiled down to finding your favorite ability and putting all of your skill points into it. Character classes still feature four abilities each, but it no longer feels like there’s only one obvious choice. The sequel is more focused on status effects such as wound, weakness, stun, and poison. I was happy to find that the RPG sin of useless status effects wasn’t implemented here — the majority of enemies can be targeted by these abilities, and they even begin to feel necessary as the plot progresses.

Spamming one high-level spell isn’t the only way to win anymore. My fights frequently went something like this: my Ninja would throw a smoke bomb to stun a crowd, my Thief would throw a barrage of knives to do double damage to the stunned enemies, and then my Warrior would cleave through a row of enemies. My Paladin would hold the threat from remaining monsters and my Mage would finish them off with chain lightning. The variety of character classes helps to reduce repetition, though I eventually got tired of the random encounters sparked by traveling on the world map (there’s a roll for that too, of course).

Like any good RPG, there is equipment to find and buy, though the crafting system is somewhat odd. While the first Knights had you waiting for real-time hours to pass before you could upgrade a weapon, you can now combine certain items to make better weapons and armor. What’s strange is that by the time I had finished the campaign, there were still only a few recipes and I hadn’t even seen a couple of the items that could be used. You are able to combine a weapon with an enchantment scroll and a charm to improve its stats, but I never found any charms, at least to my knowledge. It feels as if there are going to be more items to find later on when more content is added.

Knights 2 isn’t heavy on microtransactions like the first. Though you can buy gold to create more adventurers first or to buy better gear, it never feels required. Kyy Games has found a fun way to provide more content along the way that doesn’t force you to pay real money. At any time you can press a magazine button in the top-left corner to see this month’s edition of Modern Dungeon, an in-game tome that allows you to buy new character classes, archetypes, and trinkets while also providing silly lore. You can grind for in-game currency to buy these, and there’s supposed to be an issue every month. I’ll be checking in June to see what’s been added. 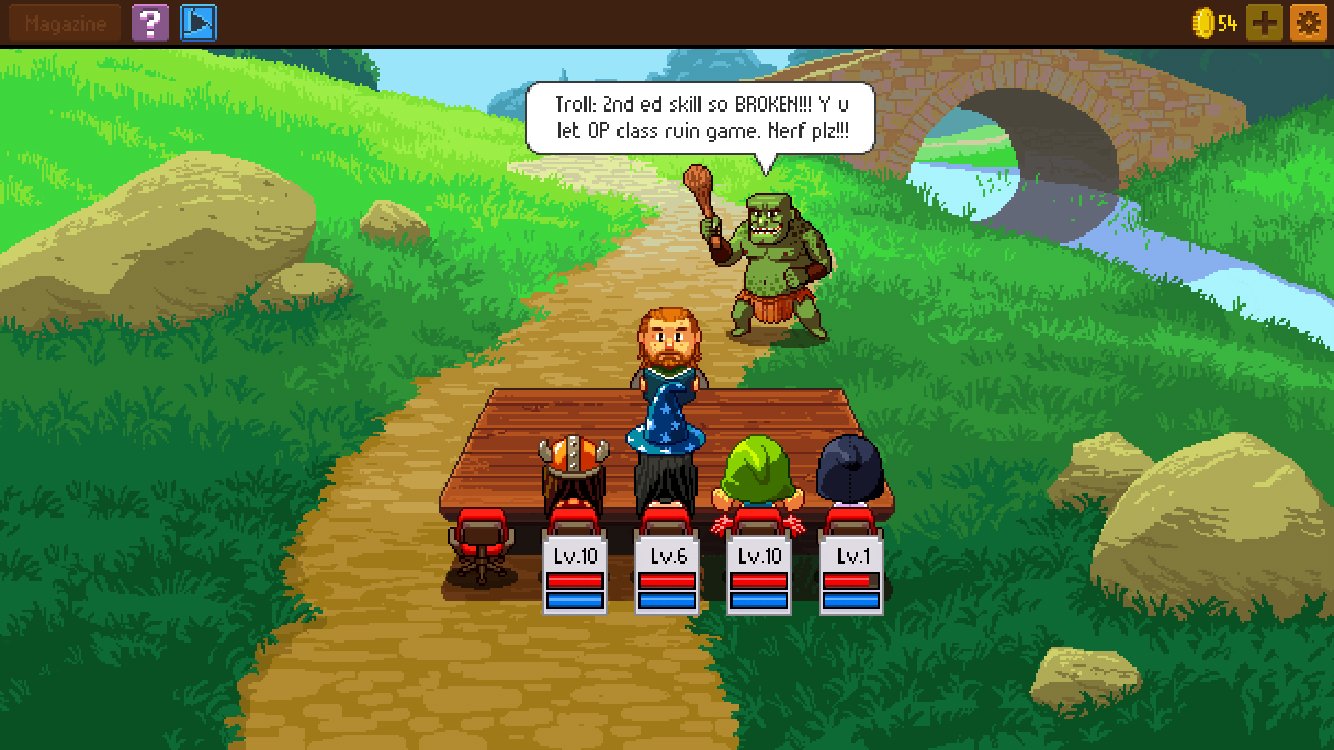 Paperos looks clean and crisp in the new 16-bit style. I played most of it in portrait mode because the interface is larger, but it does cut off most of the environments and I ended up missing some details. Landscape mode is better on the eyes but the buttons become so small that they are difficult to consistently and accurately press. The music is simple and catchy but much too repetitive. I hope you like hearing the same five songs over and over.

I can’t help but wish that the jokes were kept to being about the intricacies of editions in Dungeons & Dragons instead of trying to be “sooo random.” I realize humor is subjective, but hearing players accuse the dungeon master of making things up on the spot is more entertaining than finding a pixelated Bill Murray who wants your help to “bust” a “geese” because he’s a geesebuster. Between Game of Thrones puns and trolls engaging in Internet-speak, I found myself rolling my eyes more than chuckling. If you’re a Family Guy fan you’ll probably find a lot to love here, but I’m judging you right now.

Knights of Pen & Paper 2 is by no means a serious game, and this lightness can be as refreshing as it can be annoying. The refinement of the combat has gone a long way to mitigate the tedium of the first game, but the humor and plot won’t do much to keep you engaged. I had enough fun with it that I’m looking forward to next month’s Modern Dungeon.