This is Knights Contract. A game in which your health meter is determined by a meandering, mentally subnormal woman with no survival instincts, who will stand in lava pits, walk directly into fireballs, and essentially do her utmost to get annihilated within seconds.

Knights Contract is worse than the worst escort mission you can think of … with the exception of that one in Spartan: Total Warrior. 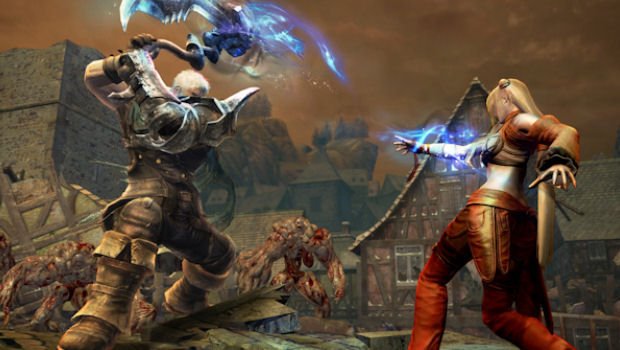 As a matter of disclosure, I’ll tell you right now that I did not beat the game. In fact, I can tell you exactly where I stopped. There is a boss that fights you on a small square suspended over a pit of magma. The boss has several ways to instantly end the battle, and it’s pure luck as to whether you’ll avoid them or not:

This one boss fight seems to collect the very worst elements of escort missions and bundles them up into one horrific Frankenstein’s Monster of pain. The broken ally AI without any inclination toward self-preservation, the random deaths that one is unable to stop, and the focus on babysitting over having any actual fun. It comes together almost like a grim parody of every escort missions ever forced into a game. So that’s where I stopped playing. 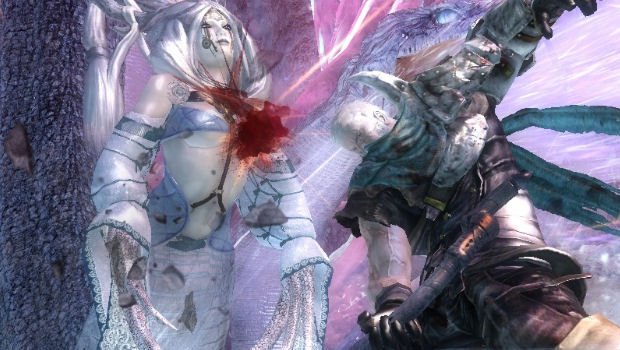 If the game had been any good up to that point, I might have considered my decision unfair. Fortunately for me, Knights Contract is one of the most boring, hideous, poorly designed games to be released in recent memory. Everything about it screams budget title, but I don’t think it’s even worth paying $20 for. From the grotesque screen tearing to the washed out colors, uninspired character designs, and basic environment textures, Knights Contract is the epitome of cheap and nasty.

For what it’s worth, the premise is at least unique. Players take on the role of Heinrich, an undead knight who has been cursed with the inability to perish thanks to his part in a series of witch hunts. He teams up with Gretchen, a witch who is trying to stop her brethren from exacting their revenge on humanity from beyond the grave. She promises Heinrich that she’ll let him die if he helps her, and so the two join forces to stop the twisted remains of the vengeful witches.

Heinrich is immortal, and as such, cannot be killed through combat. Instead, his life is tied to Gretchen’s. If her health drops to zero, then the game is over. It’s a somewhat innovative idea for an action game, but one that requires a remarkable amount of balance and care to do it right. Miserably, it’s been handled with as much balance and care as a horse on roller skates. 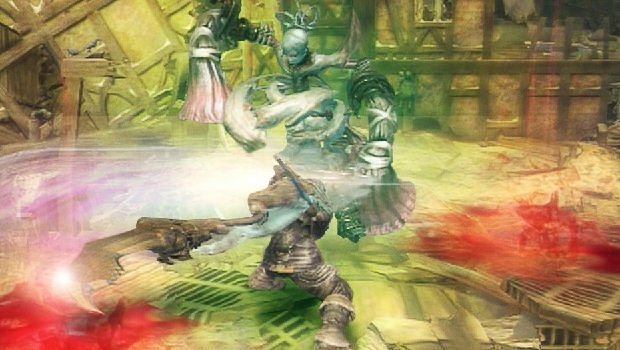 For a start, Gretchen will not protect herself, ever. She cannot dodge attacks and she won’t try to block them. She only seems to rarely attack of her own accord. Instead, she spends most of the game wandering aimlessly about, usually hovering directly in front of an enemy’s face. Monsters will often specifically target her, so it almost looks as if Gretchen and the enemies are conspiring against you. To the game’s credit, Gretchen can take a decent amount of damage before she dies, but if you’re not constantly monitoring her, you’ll find yourself surprised by how suddenly a “Game Over” screen will appear.

Heinrich attacks with simple hack n’ slash button mashing, but he can command Gretchen to perform special magic attacks as well. To pull off a magic attack, you have to hold a trigger and press one of the face buttons. There’s a good chance the magic attack will actually miss the intended target, but when it works, it can be very helpful. To get more precision, you can target enemies, which requires the press of a bumper. With one finger on the bumper, one on the opposite trigger, and a thumb on the face buttons, however, it’s quite uncomfortable and feels needlessly complex. It boggles the mind why magic attacks don’t just auto-target the nearest enemy.

Although Heinrich is immortal, he can take damage. Eventually, if he takes enough, he’ll drop to a knee, incapacitated. In this state, he can only crawl around slowly and attack with a weak, sluggish swing. You’ll need Gretchen to heal you when in this state, but enemies can take advantage of the situation and trap Gretchen with a special attack. Depending on the enemy, this can mean you’re screwed, but rather than jump straight to the “Game Over” screen, Knights Contract seems to take pleasure in forcing you to watch Gretchen’s health meter languidly, agonizingly deplete — all while you are unable to do anything. 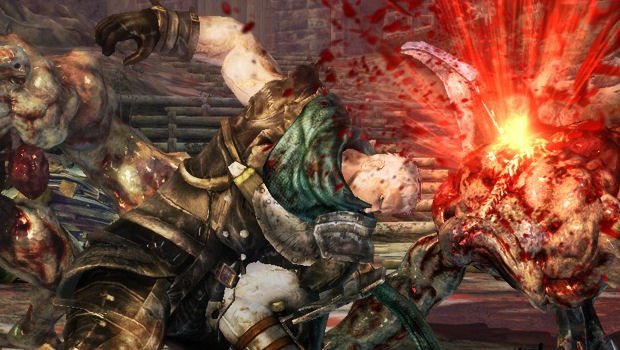 Heinrich can also take enough damage to become physically destroyed, and that is strangely preferable to incapacitation. In this state, you have to mash a button repeatedly in order to resurrect yourself. This is better than incapacitation as you’re not relying on a fucking retard to heal you. However, it takes an almost comically long time to bring Heinrich back.

In order to heal wounds quickly, Heinrich can hold Gretchen. While holding her, he cannot attack, but both their wounds are recovered. This can lead to some silly moments during boss fights where you’re running around like a greased pig, woman in your arms, hoping not to get battered by a wayward projectile. 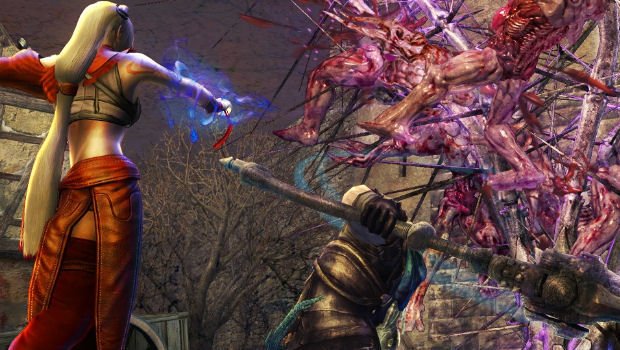 Speaking of the map, it seems many of the stages have been designed to trick the player into getting lost. It’s not that levels are especially large — quite the opposite — but their paths are connected in such a way that it’s very easy to go around in circles, and the scenery is so indistinct that it’s almost impossible to tell if you’ve entered a new area or not.

Clever gimmickry or not, there’s no escaping the fact that Knights Contract is, at its core, a broken, sloppy, dull, pointless waste of space. The majority of the game isn’t even that challenging, and Game Republic has apparently compensated for that by throwing in randomized frustrations such as those detailed in the boss battle above. The game also throws in quick-time-events (of course! Why wouldn’t it!?) and if you screw them up on a boss, they’ll resurrect with a full third of their considerable HP left.

Rest assured, this happened to me during the random fireball boss, and it was one of the most demoralizing moments of my gaming life — especially as once it resurrected, it swiftly flung Heinrich and Gretchen over the ledge and to their inescapable doom. 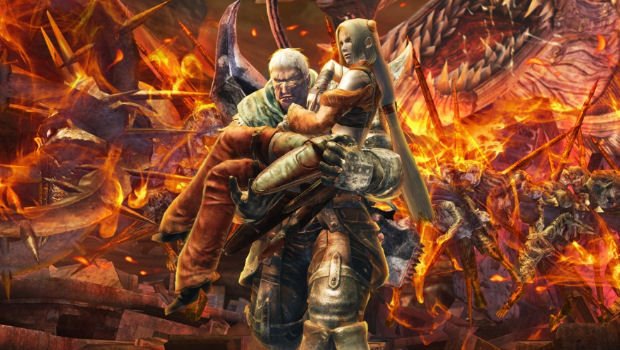 After Majin and the Forsaken Kingdom, I am devastated to see Game Republic take such a sharp and horrible dip in quality. The careless way in which the game’s fundamental gimmick has been implemented, not to mention severe lack of polish overall, is something I’d expect from an obscure European developer making a $10 PC shooter. I don’t expect this from the developer of one of 2010’s most unsung classics.

Due to the comparatively short amount of time spent with the game, we are omitting a score. Rest assured, however, that this would not have gotten a 10/10.