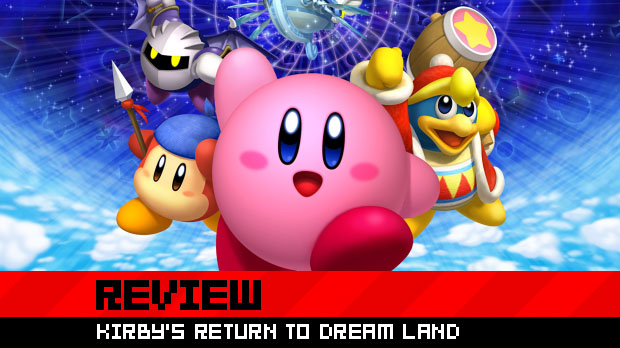 Kirby was in line for a Wii game years before we finally saw Kirby’s Epic Yarn, a platformer that turned Nintendo’s adorable pink puffball into colored string and changed the series’ formula considerably. Interestingly, Kirby’s Epic Yarn was not the game Nintendo has promised for all those years — it was originally an all-new concept that Kirby had been retroactively inserted into.

Here we are, a year on from Kirby’s Epic Yarn, and we finally have the game everybody was actually waiting for — Kirby’s Return to Dream Land. The pink puffball is back and ready to prove that good things come to those who wait.

Kirby’s Return to Dream Land is a fitting name for a game that takes our blushing cream puff back to the formula that made him famous. He’s no longer made of yarn, he’s not been split into ten pieces, and he’s not rolling around on magical rainbows — the experimental directions his last few adventures have dabbled in have been replaced with the traditional gameplay that Kirby fans grew up with.

Kirby, Meta Knight, Waddle Dee, and King Dedede unite to help a lost alien rebuild his spaceship for no other reason than charming hospitality. Visiting a variety of levels scattered around the Planet Pop Star, each with their own selection of stages and bosses, Kirby is once again doing what he does best — eating enemies and swallowing them to gain super powers in a significant collection of ambrosial platforming escapades.

A vast number of classic Copy Abilities are back, including the Sword, Flame, and Rock powers. A few new skills have been thrown in to keep things fresh, such as the self-explanatory Whip and the incredibly useful Leaf that allows Kirby to summon gusts of shredding greenery. As always, Kirby gets a cute redesign with every power he attains as well as a range of contextual attacks dependent on whether he’s jumping, running, standing, or aiming in a specific direction. In addition, Sleep Kirby is back — a thoroughly useless ability that is nonetheless too cute not to use.

At various points in the game, Kirby will be able to access Super Abilities by swallowing glowing enemies. These powers are audacious in their strength, allowing Kirby to summon gigantic swords, controllable energy beams, or roaring flame dragons. These powers can not only rid entire screens of enemies but also break down otherwise indestructible obstacles, clearing the way to special sub-stages that contain increasingly tricky platform challenges and evil “Sphere Doomer” bosses.

Kirby’s standard ability to inhale objects has been given a boost as well, with a shake of the Wii remote creating a powerful vacuum that sucks in large enemies or impenetrable brick walls. While mostly optional, there are areas where Kirby’s suckage will be crucial, especially in those crafty optional stages.

For those with extra remotes, other players can drop in or out at any time, stepping into the shoes of Waddle Dee, Dedede, Meta Knight, or a different colored Kirby. Interestingly, the co-op harks back to Sonic the Hedgehog 2, with extra players filling more of a “Tails” role than becoming truly independent characters. If secondary players die or fall out of the camera’s range, they’ll respawn next to the main pink protagonist, as lives and progress are only at risk if the first player dies. Non-Kirby player characters don’t possess their own unique attacks either, taking their cues from established Kirby Copy Abilities (Waddle Dee uses Spear, Dedede uses Hammer, and Meta Knight uses Sword).

Co-op is fun but entirely optional. There are no forced and convoluted co-op puzzles, instead inviting the kind of couch-based multiplayer that we had in the good old days. Just having friends jump into a game at any time is so much more refreshing than watching two characters help each other open doors in games that are desperate to justify their co-op status.

In fact, refreshing is a great word to use for Kirby’s Return to Dream Land in its entirety. After a year of complex and brooding games, it’s a breath to fresh air to have Kirby on a console again, sticking to the colorful and adorable basics of good, old-fashioned platforming fun. Kirby’s more unique adventures have been great, but it’s ironically stimulating to have Kirby going back to a conventional title, especially in an industry so pressured to innovate. Kirby doesn’t need to innovate, he just needs to be fun; Return to Dream Land brings the fun in spades.

As ever, much of the challenge in Return to Dream Land is volitional. Finding hidden items to unlock sub-games and other bonuses can provide considerably more demanding gameplay, but the main stages can be conquered by players of almost any skill level. That said, those who want to see harder platforming action ought to play through to the end, because a few of the latter stages will give such gamers what they’re looking for. While the game never ramps up the difficulty to hardcore degrees, these levels put up just enough resistance to satisfy all but the most desensitized of masochists.

Graphically, Hal Laboratories deftly ignores the technical limitations of the Wii and delivers a game that looks damn beautiful, despite the standard definition. Character animations bubble with life, and environments are bright and gladdening. If there are any glitches to be found, I couldn’t see a single one. As with nearly all Kirby games, there’s a great soundtrack on offer, although the selection of tunes aren’t quite so memorable as in other titles.

Come to think of it, the soundtrack is the only real complaint I can muster about this game. It can take a solid six hours to beat the first time around and packs plenty of extra content to keep it bolstered. The levels are superbly constructed, and the boss fights make for engrossing confrontations. Outside of the music, there’s not a single thing about Hal’s latest game that I could think of changing for the better.

With its impeccable balance of difficulty, satisfyingly simple level design, and insurmountable overload of squishy charm, Return to Dream Land provides a platform experience that comes as close to perfect as one can get. As so many games strive to be considered art or emulate blockbuster movies, it’s becoming increasingly rare to find a videogame that sees itself simply as a videogame and devotes itself entirely to giving gamers the kind of authentic, natural fun that many of us grew up enjoying.

Although polished to modern standards, Kirby’s Return to Dream Land carries the spirit of the 16-bit era in its heart, bringing one back to a time when games could be bright and happy without feeling the need to serve two scoops of cynicism at the same time. This is the kind of game you could once find in abundance on the SNES and Sega Genesis, now refined to a distilled and ultimately superior form. Videogames simply do not get any more pure than Kirby’s Return to Dream Land.