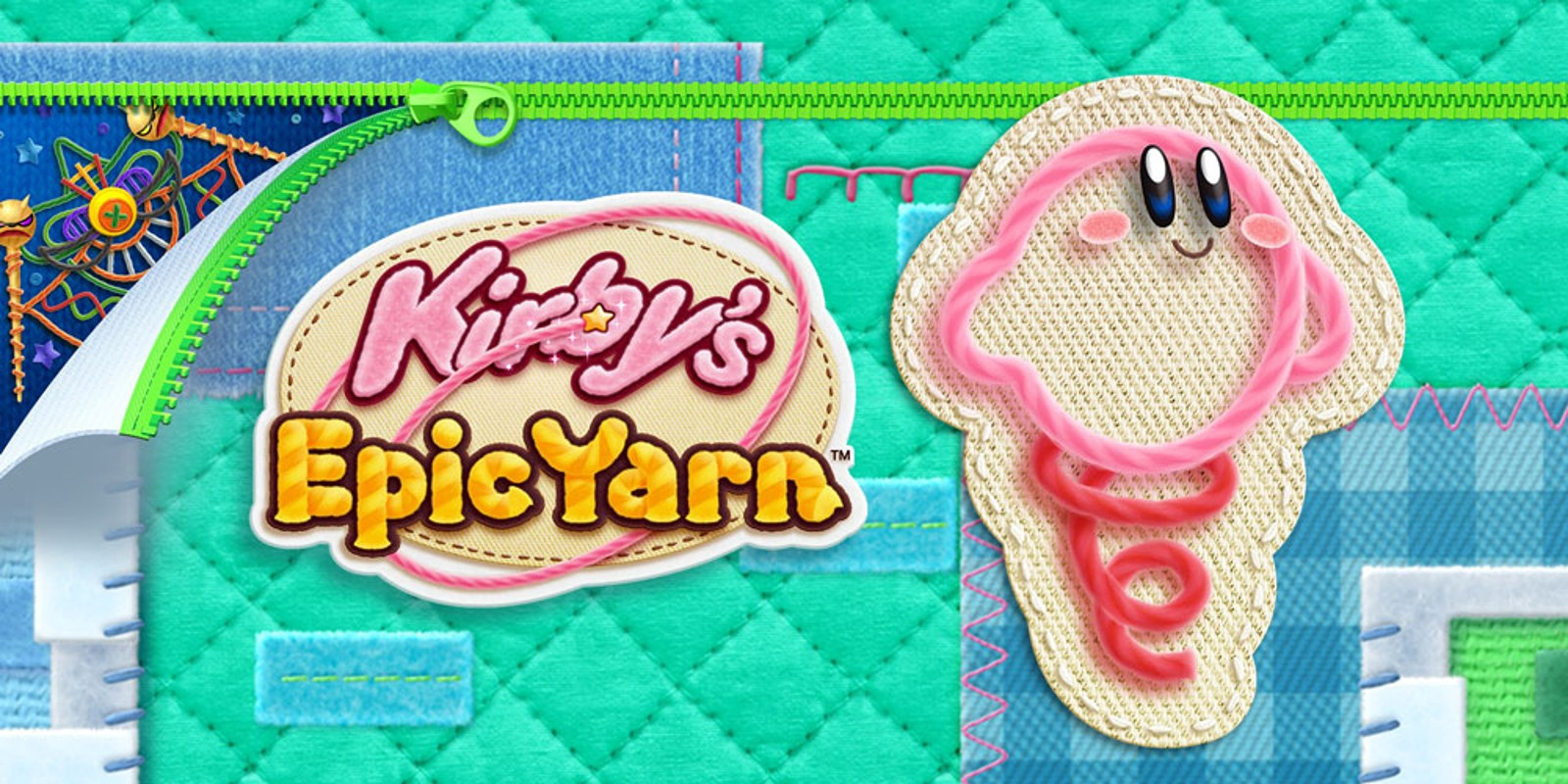 When Kirby’s Epic Yarn was announced, many people thought Nintendo was stringing us along, that the game would be poorly stitched together or otherwise patchy. A 2D platformer with a cute gimmick runs the risk of being threadbare, but it would appear that developer Good Feel has it all sewn up.

You might worry that the bad yarn puns are a bit woolly, but I refuse to change my material. 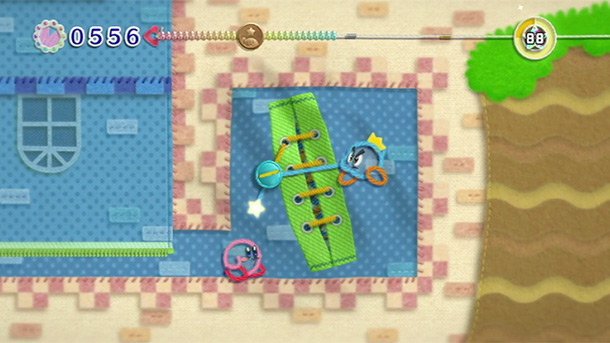 Kirby’s Epic Yarn reinvents everybody’s favorite pink puffball by transforming him into everybody’s favorite pink stringball. The tenuous setup is that an evil wizard has arrived from Patch Land, turned Kirby into a length of yarn, and trapped him inside a magical sock. He meets a little blue fellow called Prince Fluff, and together they work to save both Patch Land and Dream Land from the nefarious Yin Yarn.

To be honest, the game could have done without the story and the repeating cutscene (complete with creepy uncle narrator) that appears at the end of every boss fight, but otherwise, you really don’t need to worry about a narrative. Some stuff has happened, and now Kirby is made of string.

Epic Yarn is a traditional 2D platformer through and through, unafraid to stick to the franchise’s simple roots. No longer able to suck enemies up and take their abilities, Kirby instead uses his new string flesh to get about each stage. He can turn into a parachute to make careful landings, stomp on enemies as a weight, or turn into a car to zip along platforms fast. Most importantly, he can whip out a length of yarn to tangle up enemies and throw them around. It’s all very intuitive, and all very simple.

In fact, simplicity is at the game’s very core, since Kirby can’t even die. Instead of suffering a grim death, Kirby loses points whenever he takes damage from traps, enemies or falls. Points are accumulated with gems, and the gems will fly out of Kirby, à la Sonic the Hedgehog‘s rings, whenever he’s hit. The gems can be recollected, but taking a hit invariably means losing points and — more importantly — losing a chance to score a gold medal at the end of the stage. 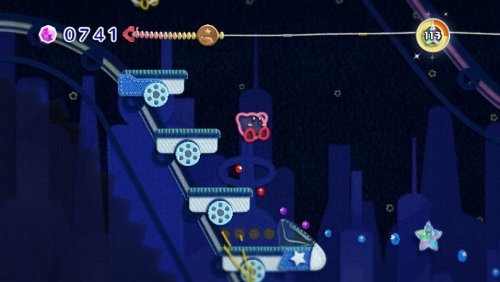 As a hardcore gamer, you may think that the lack of traditional “challenge” would make the game boring. After all, if Kirby can’t die, what’s the point? Fortunately, the lack of dying does nothing to affect the game — in fact, losing precious points and not getting a Gold Medal at the end of a level often makes the game even more engrossing. Rather than feeling protected by an energy bar, each hit represents a real failure. Sure, even if you take a fair few hits, it’s usually still possible to obtain a Gold, but it becomes increasingly difficult, and somehow, failing to get that Medal seems even more punishing than seeing a Game Over screen.

In short, there is no way that you can not beat the game, but mastery is another matter entirely.

Even without the hoarding of precious gems as an incentive, Epic Yarn‘s decision to dispense with a traditional challenge has only enhanced the game. The focus is purely on fun and exploration, as opposed to trying desperately to survive. Each level of Kirby’s Epic Yarn is unique and undeniably charming, full of special tricks and gimmicks that never get old. Whether you’re riding on the back of a space roller coaster, swinging from trees, or sledding down a snowy slope, Kirby’s Epic Yarn constantly surprises and pleases, with the focus squarely on player enjoyment at all times. 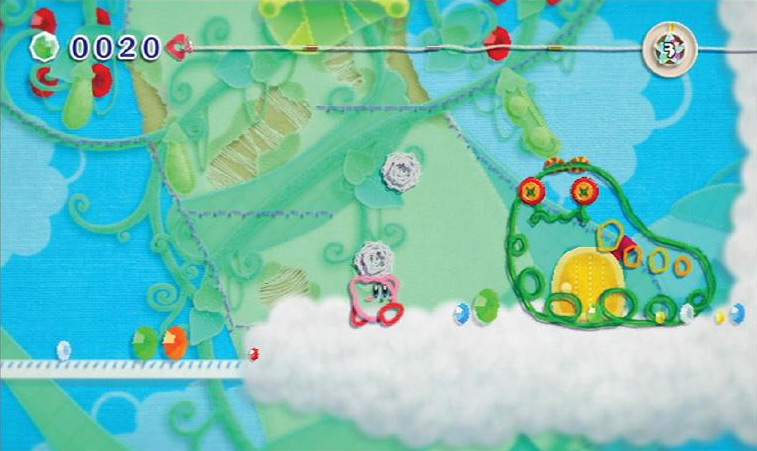 The fun factor is, of course, helped along by the patchwork conceit. Not only does each stage look fantastic with bright fabrics and enemies made out of string or buttons, but Kirby’s ability to send out a whip of yarn to yank bits of the stage around, unzip the background, or otherwise manipulate his surroundings makes for some really clever moments.

Kirby himself can use his stringy body to transform into a variety of things, and it always feels like a treat whenever he does. Kirby can turn into a UFO, a dolphin, a racing buggy, and giant death tank, among other weird things. The only weak sections are those where Kirby turns into a train and requires some token Wiimote waving in order to get about. Fortunately, the train barely appears in the game, and for the most part, you’ll be partaking in fantastic platform race sections, or shmup-style rocket blasting, or underwater dolphinism that puts Ecco to shame.

Then there are the bosses, which are all pattern-based, simplistic affairs, but somehow still manage to remain inventive and memorable. Fire-breathing dragons, pumpkin magicians, and evil octopuses are all in attendance, each one ready to rob you of a chance at getting the Gold Medal. In fact, boss stages go beyond Gold, each one requiring extra gems in order to unlock special optional levels. Good Feel did a great job of enhancing the challenge without ever relying on the concept of “death,” something that ought to be commended. 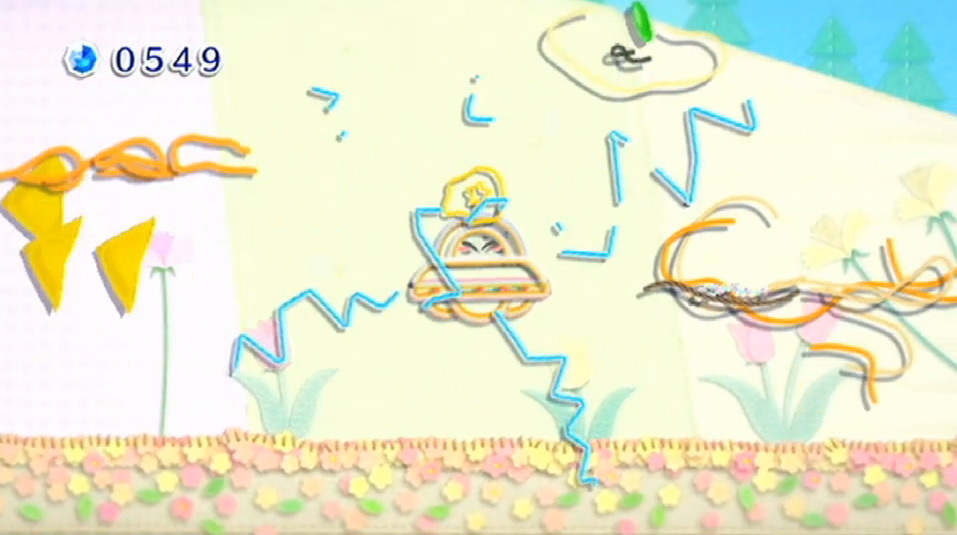 As well as the main levels, there are little distractions peppered throughout the game to keep you interested. For instance, you can spend gems or find items in levels to decorate Kirby’s apartment, and play minigames with the Patch Land residents. I would have personally liked to see much more of this aspect of the game, as the apartment appears rather pointless and the minigames are only fun for so long. Giving us more of a reason to hang out at Kirby’s place and more things to spend gems on would not only have enhanced the game in general; it would have made the gems even more important, since there’d be a greater incentive to pimp his pad out.

If you don’t want to hog all the fun, Epic Yarn supports local co-op play, with another player taking on the role of Prince Fluff. Although it doesn’t change the game significantly, there are some cool co-op moments, such as having the movement and the cannon of the death tank controlled by separate players. For the most part, co-op is somewhat more chaotic than a single-player game, but it’s definitely enjoyable.

Like all Kirby titles, Epic Yarn won’t take too long to beat, especially if you just carelessly blast through without worrying about points. However, the levels are so full of character and innocent entertainment that it’s highly unlikely you’ll only want to play them once. Plus, with the extra things to do and Medals to be earned for completionists, there’s more than enough merriment to justify the price tag. Provided you like simple, clean fun, that is. 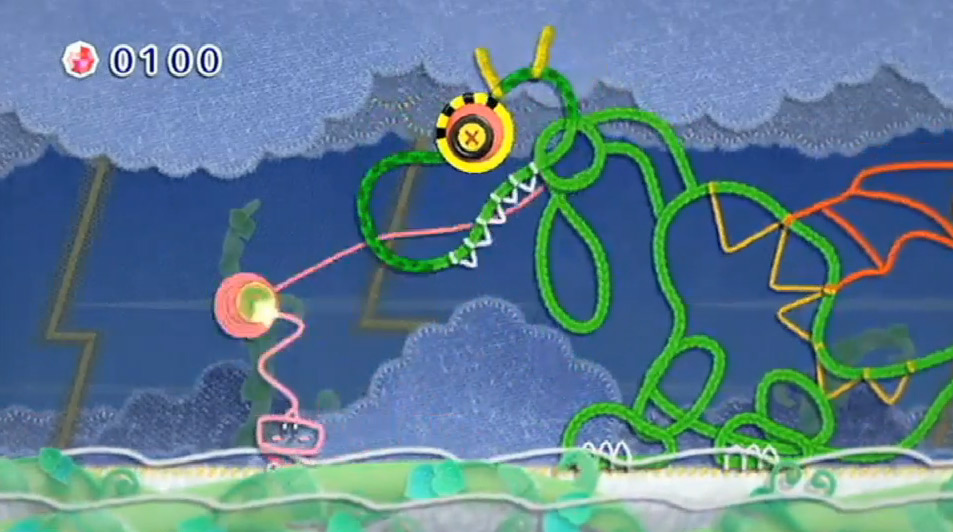 Kirby’s Epic Yarn is an absolute delight. Oozing cuteness at every turn, from the wonderful animation to the gorgeous music, this is a game that should have pride of place in any game collection. It’s a simple little title, free of high-tech gimmickry and gritty realism. It’s a good old-fashioned platformer that manages to be endlessly rewarding and only disappoints in that more incentive to succeed would have truly perfected the title. Even without that, the fun is its own reward, and Kirby’s Epic Yarn stands as one of the very best Wii games of the year.

Also, Kirby is made of Goddamn string!