More than any other videogame series, Sierra’s classic King’s Quest may be the one I hold most near and dear to my heart. Released during the golden age of adventure games (1984-1994), the seven main entries in the series (yes, I don’t count Mask of Eternity) are some of my favorite games of all time, with such a vast array of childhood memories associated with each one.

The original game in the series revolutionized the static adventure game genre by combining vibrant, animated graphics and text parser-based gameplay. Years later, the series innovated yet again with its fifth installment by implementing a point-and-click interface and still-gorgeous VGA 256-color graphics — the former still being used in almost every single adventure game released today.

But did AGD Interactive pull it off? Is King’s Quest III Redux a beautiful upgrade of the original classic? Or is the game an enhancement of something that, well, should never have been enhanced? 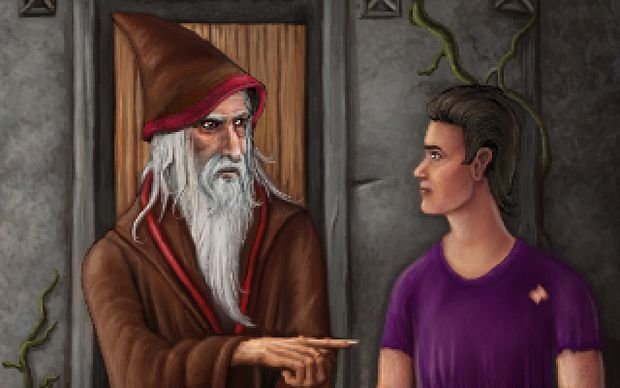 One of the things that makes the original King’s Quest III so special is its mysterious and wholly satisfying story.

With the first two King’s Quest games, the stories were more or less simple tales of a king going on various quests to retrieve different treasures. (In the first game, these “treasures” are mystical items; in the second, this “treasure” is a wife!)

At the start of the third game, though, gone are the familiar world of Daventry and main character King Graham. In place of them is a dark and foreboding land called Llewdor and a new main character, a servant boy named Gwydion.

When I first played the game more than twenty years ago (!), this drastic change of scenery shocked me. Even though the sequel played exactly like the first two games, it felt like a new game in a completely new series.

Without spoiling anything, let’s just say, despite the confusing opening, the story in King’s Quest III takes many twists and turns, eventually connecting everything to the first two games in surprising and pretty magnificent ways. 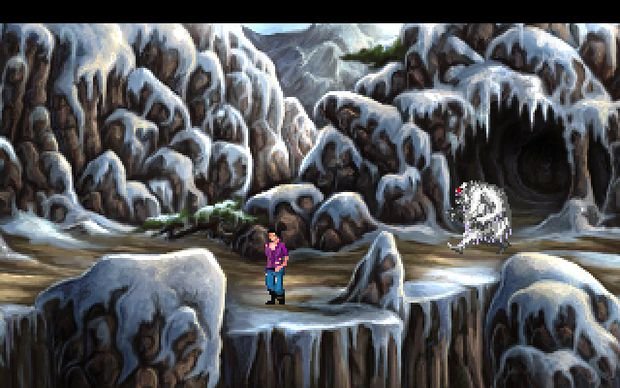 While the original King’s Quest III starts with no explanation of who you are or what you are doing in a strange new land, King’s Quest III Redux adds an opening cutscene hinting at some of the connections to the first two games in the series.

While the cutscene is very well-made, it is a little disappointing that this visual introduction spoils one of the major twists in the game. For someone who has played the original more times than I can count, nothing was particularly ruined for me, but it is worth noting that newcomers may not have the same gasp-inducing reaction playing Redux for the first time as they would have had they played the original.

And this reworked opening is not where the changes end. In addition to the gorgeous visual makeover (more on that in a second), King’s Quest III Redux sports many other surprising changes that, luckily, are for the better.

For example, at the start of the game, young Gwydion must figure out a way to escape the clutches of the evil wizard Manannan (arguably the biggest asshole wizard ever featured in a videogame). The steps to accomplish this are the same, but there are small additions and tweaks to certain puzzles that make playing a whole new experience.

At one point I had to discover the secret entrance to Manannan’s underground laboratory. Being a self-proclaimed expert of the game, I knew exactly where the lever was that opened the door to the lab.

To my surprise, however, simply clicking on the lever did not open the door. Instead, upon finding the lever, I was presented with a puzzle involving entering a password to activate the hidden switch. “This wasn’t in the original game!” I may or may not have yelled out loud while a pleased smile formed on my face. 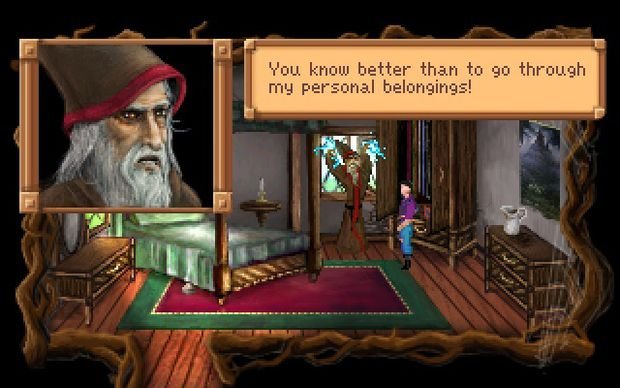 There are many puzzle additions like this found throughout King’s Quest III Redux (and even some reworked locations!). While most of them are interesting and welcome additions, some are almost absurdly difficult and really ramp up the already challenging game.

But, in a way, the addition of these challenging puzzles makes for a fair tradeoff. In the original, the text-based gameplay almost made the game too hard — trying to type in the right combination of verbs and nouns to proceed through the game was near-impossible, especially with the problematic spell creation used in the first half of the game.

But by implementing a point-and-click interface, almost all of these problems are gone, leaving the player more freedom to focus on the game’s smart puzzles and vast exploration. So even though the new puzzles are tough, it makes sense that they were added to make the game just as equally challenging as the original.

It also makes fans of the original game enjoy the experience even more — discovering new things to do in a game you love is always fun! 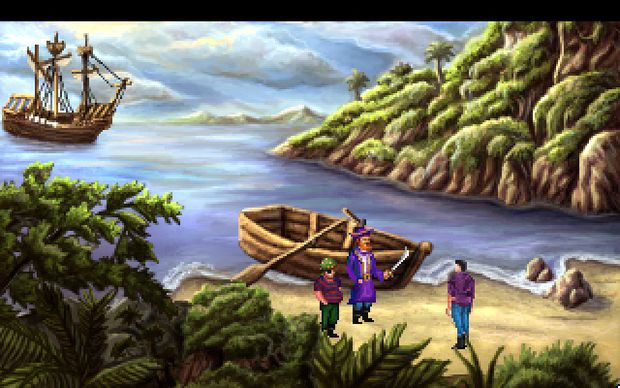 Aside from the occasional new puzzles, point-and-click interface, and slight story tweaks (nothing too major), the most obvious changes AGD Interactive made are the major aesthetic overhaul of the game’s graphics and the smart addition of voice acting.

I was a fan of AGD Interactive’s previous VGA remakes of King’s Quest I and II, so I knew going into King’s Quest III Redux that I would love the way the game looked. And I do. A lot. It’s so beautiful.

What I did not expect was to love the voice acting as much as I did.

Just as I would have a fear of hearing Link from the Zelda series speak for the first time, I was worried that putting a voice with Manannan would ruin the terrifying memories I had of the evil wizard as a child. But, instead of being disappointed, I was pleasantly surprised by, not just Manannan, but all of the voice acting in the game. Each character sounds great and fits the voices I had imagined in my head all those years ago. 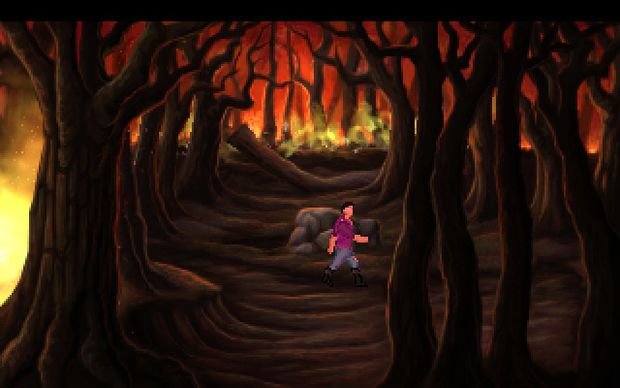 Adventure games are a tough sell to non-fans of the genre, as their relatively slow-paced nature and sometimes needlessly complicated puzzles can be quite the turnoff.

King’s Quest III Redux, though, is the perfect example of how exciting and wondrous an adventure game can truly be. Not only can you die in King’s Quest III Redux (in many different ways, I might add), but there is a true sense of dread and urgency in the first part of the game — a feeling unmatched in even some of the scariest of survival horror games. 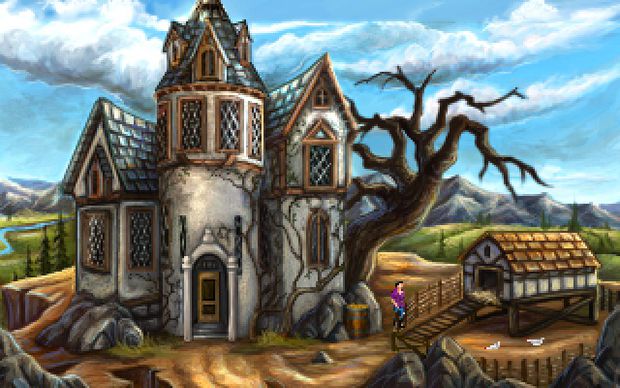 For fans of the original King’s Quest III, this is a no-brainer: download this game.

And to all the series virgins out there: With very appealing updated graphics and controls, and a major throwback to the challenge and dark fantasy themes of old classic adventure games, I say give this remake a try. You may be surprised how much you like it.

If it wasn’t for my wonderful memories of the original that I stubbornly refuse to let go of, I would say that King’s Quest III Redux is the definitive version of this timeless adventure game.

It is a polished, technically impressive remake of the original King’s Quest III, made by talented people who obviously have a true love and respect for the series.

And that’s all a nostalgic fan like me could ever ask for.