My horse, my horse…

I can remember building sandcastles in San Francisco’s wonderfully-named Ocean Beach when I was young, armed with just one bucket with an embattled parapet mold to give the formations that distinct “castle” look, and another large blue bucket with a white hose. An enterprising scamp (read: lazy), of course I would build close enough to the water that I could efficiently refill my hose bucket without a lot of walking.

And I can remember the dread when idiot child me, who did not know about tides, turned around to find the vast slush of ocean lapping at my castle door. Panic. Moats were dug not to thwart would-be invaders, but natural disaster, rerouting the encroaching water around my creation. Eventually it would not be enough, my monument consumed by the unfeeling waves. 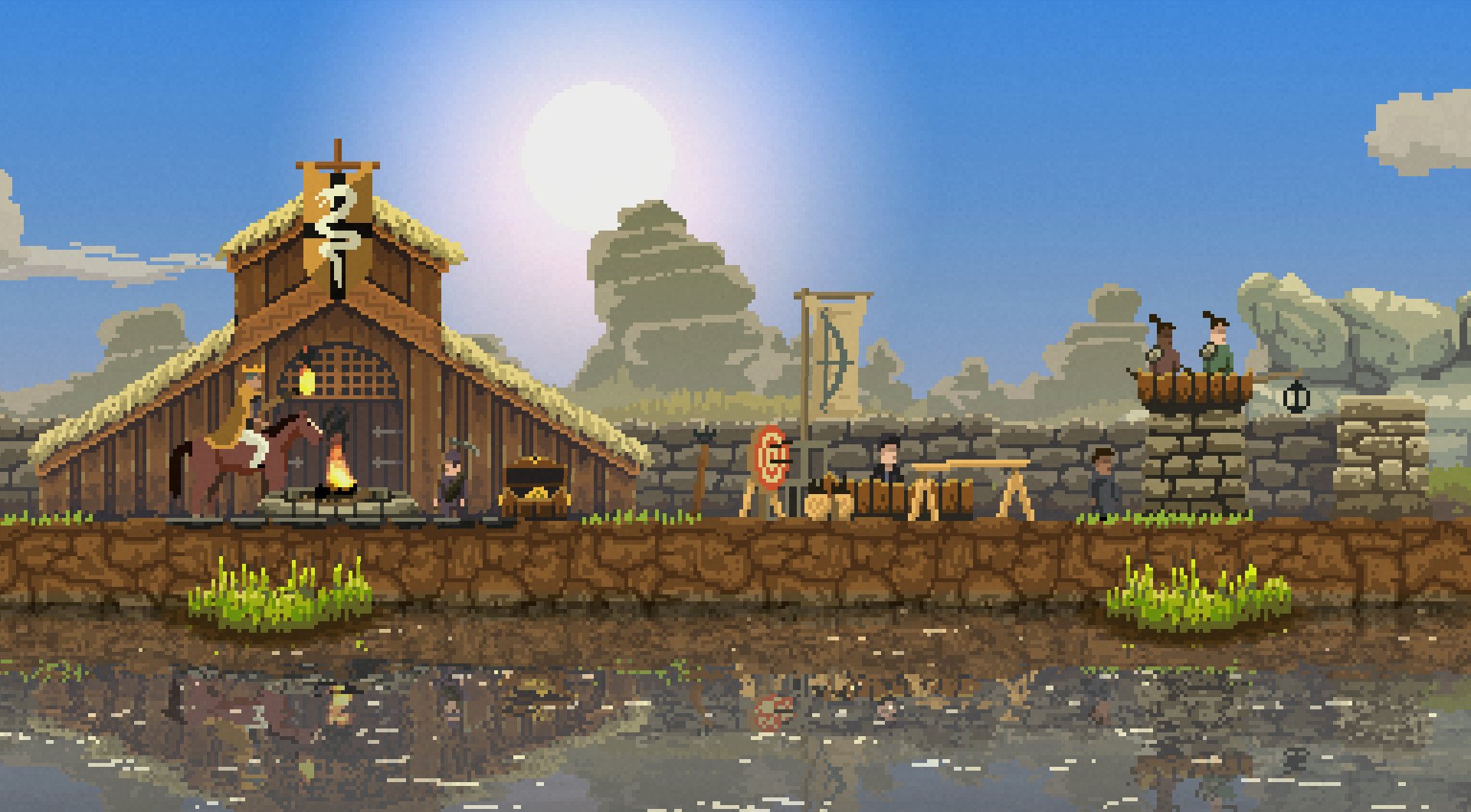 Kingdom takes the sprawling, granular nation-building of games like Civilization, stripping labyrinthine menus down to a button press. As a randomly generated King or Queen atop your horse, you can walk left or right, and sprint for as long as the horse’s stamina allows. Otherwise, the only thing you can do is drop a coin from your purse.

You’re versed in this simplified building with a brief tutorial section that encourages you to start a camp fire, hire two peasants (one coin recruits wandering souls into citizenship), buy a bow, buy a hammer, and build a wall on either side. Whichever citizen picked up the hammer will start building the wall while the archer starts shooting game, which will net you coins. Kingdom is completely hands-off from there.

It’s possible to wander too far left or right by the time the first night hits, at which point you might get attacked by a crowd of malevolent, No-Face-looking creeps that’ll bop your crown off your head and snatch it. So your kingdom goes. You didn’t even last a night. Each run becomes as much about experiential learning, figuring out the systems, and this is where Kingdom shines. Deciding on the proper allocation of funds, or learning little tricks like rushing far into the wilderness to scare deer back towards your archers (they’re worth three coins to the rabbits’ one) for early gold gain. But then you’ve survived long enough to realize farms are the income-generator of the future and stock up on scythes. You’ve expanded so far there are hardly any deer left, anyways.

While these moments of clarity are appreciated, Kingdom‘s hands-off approach can frustrate. I went weeks into a run (the day and night cycle is very quick) and expanded considerably, but the goblins’ nighttime raids — particularly the huge waves that occur every five nights — kept utterly destroying my facilities, stealing my citizen’s tools (removing them from their job) and coins (reverting them back to peasants, who need to be re-recruited for a coin). Later I would realize that it’s because I didn’t invest in the shrine I walked past deep in the woods (I couldn’t afford it), which would grant my kingdom the knowledge of masonry and provide a host of stronger wall upgrades and the like.

But while the inscrutability can grate, the biggest problem is the simulation not holding up to its scope once you’ve puzzled everything out. Kingdom‘s simplification eventually impeded me more than the massive night raids that early on feel somewhat unearned, like an asshole shaking your Etch-a-Sketch.

Archers not stationed in towers, for example, all pool behind the nearest wall at night to shoot at incoming enemies. This means that once that one wall goes, you could lose clusters of dozens of archers, while all the other walls the enemy waves will slowly tear through are only protected by lone tower-mounted archers. And while it becomes apparent immediately there is a need to put yourself behind the kingdom’s walls at night, the archer AI (and, later, knights) will frequently get themselves picked off by not being home before dark. Archers will often bunch of inappropriately, too; I’ve had had double the amount of archers on one monster-free end of the kingdom while the other was under attack. 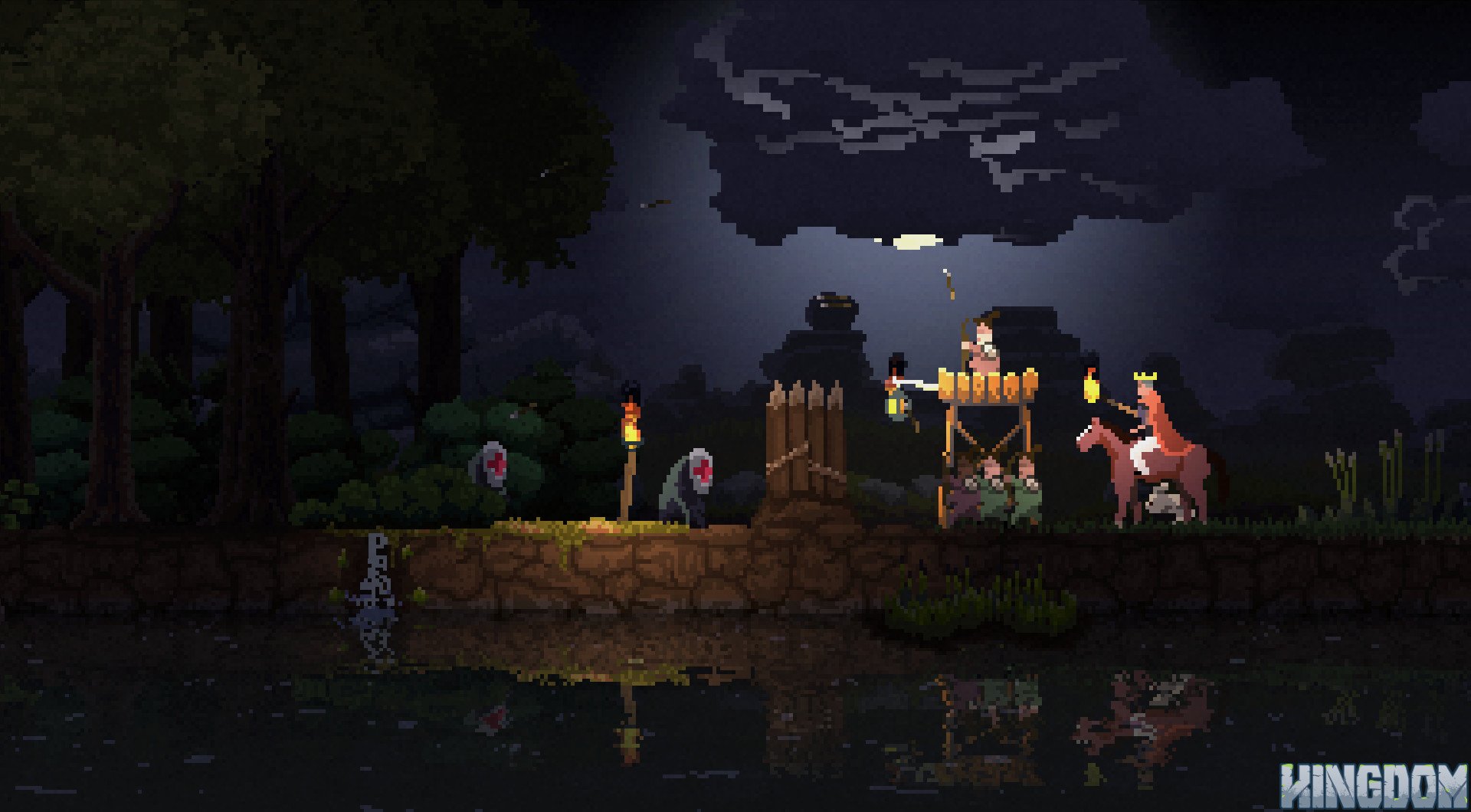 Once you know exactly what to do, the beginning bit of building out your kingdom feels pretty rote. Start with the next-furthest walls to get the inner set for free. Travel far left or right to make sure the masonry shrine is close, and probably the one that strengthens archers, too, or you’re screwed. Hope that you don’t get a weird load out where there’s just no wildlife early on and no way to make money (happened once).

Eventually I would consistently get to a point where I constantly had way more gold — the sack literally over-flowing, coins falling into the river — than I could use, yet still couldn’t make any quicker headway on successfully “beating” the game because of the bottleneck caused by a lack of citizens and the quick day/night cycle compounded by my expanding kingdom length and limitations on the horse’s stamina.

You recruit peasants from outlying campsites, but expansion in either direction can destroy those sites, decreasing your stock of recruits. Plus, each site will only net you two folks per day. It can require a ton of time to replenish your forces after a big wave, thanks to flying enemies that can permanently kill citizens, just to have it happen again five days later. It takes some precision and failure to avoid a Sisyphean set up, but by that time the building becomes rote, the exploration is gone, and it becomes simply a gorgeous set of systems you’re minding like a bean counter, except they’re jumping beans. The lack of precision, then, caused by the stream-lining that is so laudable, becomes frustrating. 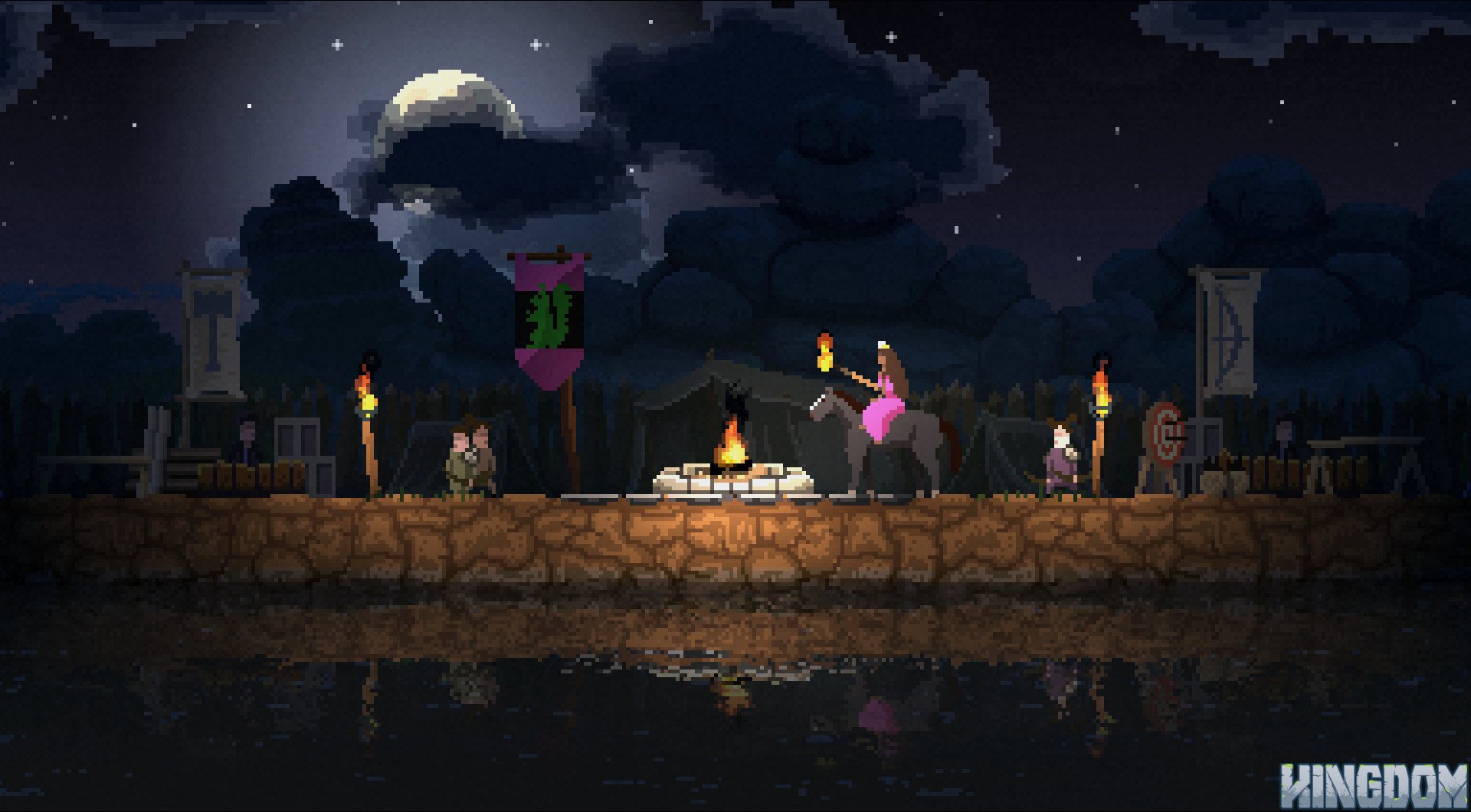 While learning certain things feels like honest revelation, I too often felt like I was playing against the game, like when I’d force mounted archers out of their towers by starting new construction on them, because mounted archers won’t hunt to generate profit, even though it becomes obvious there are no daytime threats. Or when I would try to start a new project nearer the city center to distract my engineers who were blithely heading out into the unprotected night into a swarm of pickpocket goblins to work on a further out project because I mistimed how long it would take them to get the cue and start walking all the way across the kingdom.

Kingdom very cleverly reduces a complex genre down to something digestible, but that same simplification struggles against its later scope. When your land grows too wide, traveling end to end becomes a chore (it can waste entire day/night cycles), while getting to that point requires gaming somewhat imprecise AI. Losing it all after an hour basically means re-doing the early game the exact same way and finding a point of divergence, say, at the 50 minute mark that previously undid you. It’s too much retreading as the simulation naturally caps how quickly you can return to prior strength regardless of accumulated knowledge.

When all the arcane is teased out and the seams obvious, not even the beautiful score and gorgeous pixel reflection in the river can encourage me to execute the precise, efficient moves that would lead me to victory.  But while I wasn’t so interested in mechanically performing the “correct” blueprint of success after I figured it out, the journey towards acquiring that knowledge was still worthwhile.