When you waltz away, you don’t hear me sing

I can just say that phrase, “Kingdom Hearts,” and it’ll whip a lot of people up into a frenzy. Let’s madlibs this: Kingdom Hearts….what? I bet everyone here can come up with 1000 different words to describe this insane franchise.

Kingdom Hearts…is now a rhythm game? That might not have been on anyone’s mind before Melody of Memory was announced. 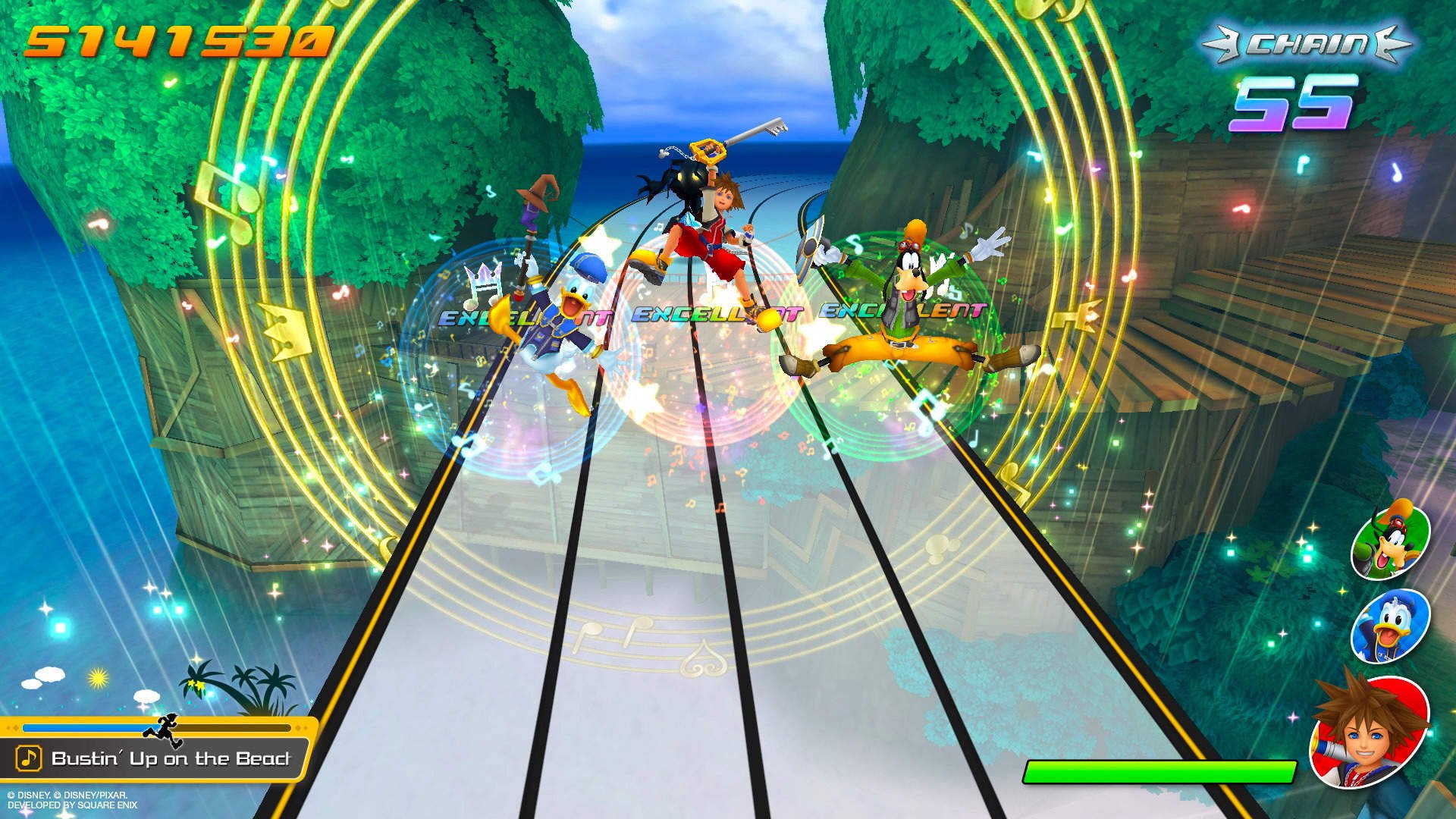 I cannot stress enough how weird of a series Kingdom Hearts is, but that’s partially why I love it. Square Enix has been pumping out rhythm games based on storied RPG franchises for some time now, and regardless of whether or not you’d include Kingdom Hearts in that equation (I would), Melody of Memory is here.

So here’s the deal. Melody of Memory is very much a traditional rhythm game with a recap-like story tacked on. You’ll go down a musical track to a beat with Sora, Goofy, and Donald, just like you would in the main game: but with a rhythm twist. When enemies appear on beat, you need to smack them. Sometimes you’ll smack two or three at a time (which means two or three simultaneous button presses); sometimes you’ll need to jump into the air first to meet them or trigger an item to blow them away with a different button.

Sora is the primary character you’re controlling on the track, who is always running forward, but he can jump on command, as well as glide with a jump-button-hold (you’ll need to do this to hit glide notes). That’s basically the game. There’s items involved, a few of which trigger light summoning (which is basically just a super that clears some stuff for you) or healing, and a lot of beat-keeping. It can be a blast. But Square Enix also doesn’t do a whole lot with that basic framework.

In the moment, the actual gameplay (especially on the harder Proud mode) is fun. Square Enix did an amazing job of making it all feel like you’re authentically playing a Kingdom Hearts game: like Melody of Memory was taking place inside of a “rhythm world” in a real entry. My absolute favorite pro move is gliding through a tricky section with Sora while I’m tasked with defeating enemies on the ground below. It matches the intensity of some of the series’ toughest fights.

You can play all of these tracks by way of the campaign, free play, versus, and co-op. The bad news is that songs need to be slowly unlocked in the story before you can really go to town in the free play mode, and the campaign moves at a glacier pace: mostly recapping the events of previous titles through re-used cutscenes. As you drive through the world map you’ll need to pass through various gates cleared via completing a certain number of challenges across all of the stages in that cluster.

One of the chief issues I ran into was that the challenges are very homogenized and the gating is a tad out of control. The vast majority of levels require players to essentially “do well without items,” occasionally tasking folks with clearing a song on normal or hard mode. That’s basically it. You are constantly chastised for using items, putting you in a bit of a conundrum: “Do I have fun and use all these flashy power-ups, or just clear the level the right way so that I can progress and unlock more songs?” Levels have three challenges each, and there are 345 challenges in total. 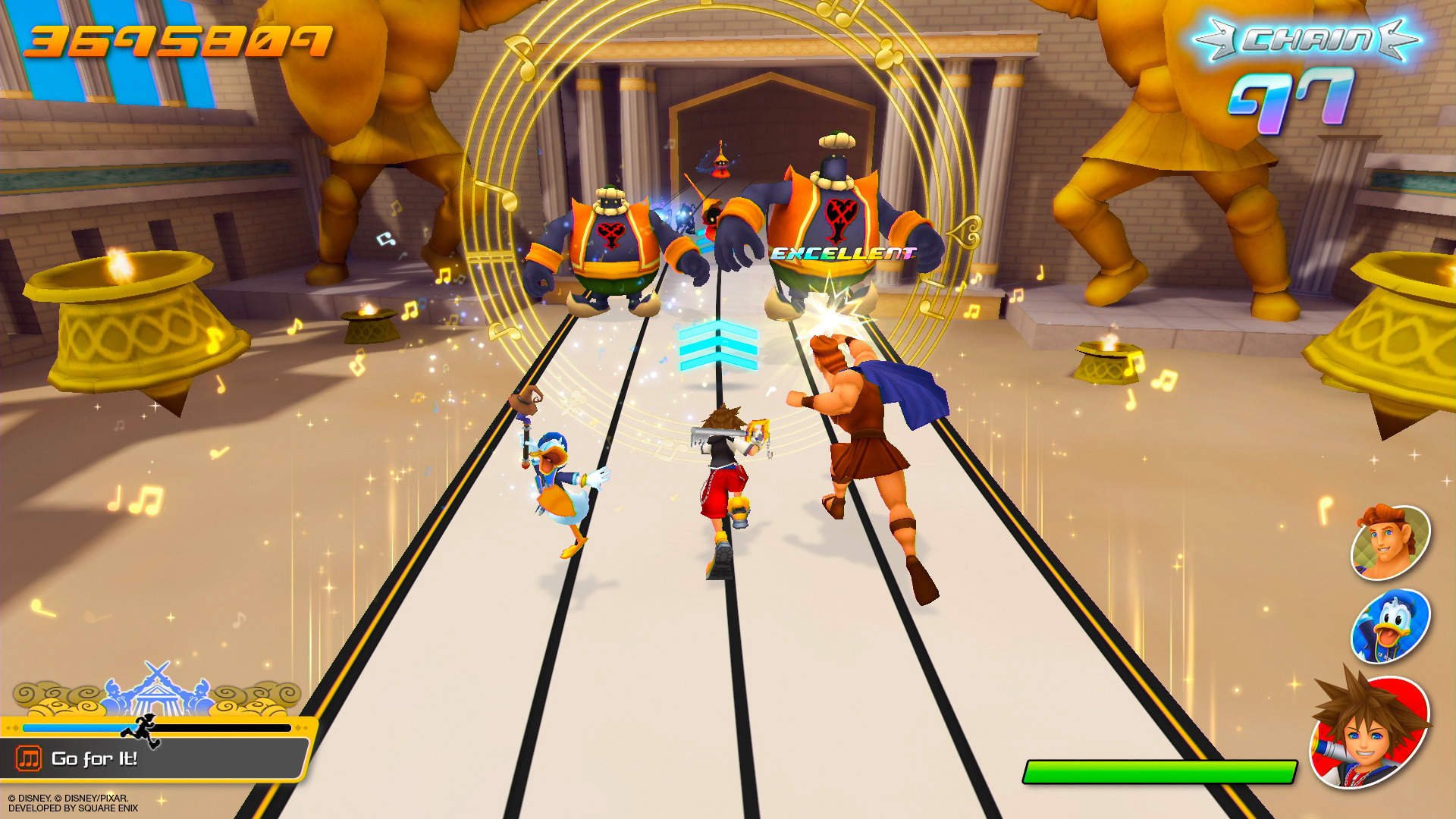 It’s annoying, because the song list is actually pretty great, spanning tracks across the entire franchise. While there are some Disney bangers like “Under the Sea” and “This is Halloween” (instrumentals, of course), Square Enix has built up a respectable catalog of amazing Kingdom Hearts music over the past 18 years or so. The ability to start on proud mode and not have to work your way up to it is a small concession for rhythm fanatics.

But again, the pacing is off, and some of the augmentative mechanics aren’t quite right. Much like the story mode, a lot of the “RPG elements” feel superfluous. Synthesizing items for slightly better power-ups feels mostly meaningless when you’re expected to not use them, and the “guest” characters don’t add much at all to each stage, mostly appearing (vocal-less) to sub in for Goofy or Donald.

Kingdom Hearts is a good rhythm game that meanders way too often with its presentation. If you’re a diehard fan who sings “Simple and Clean” to themselves in the shower, you’ll probably love a trip down memory lane, while humming all of the battle sequences that a lot of casual players might skip over. Just know that it might take some work to get to your favorite parts.