Panic-inducing puzzles for you and a friend

We’ve seen a lot of Overcooked-inspired hectic co-op games in recent years, and honestly, I’m not tired of them yet. But it’s always nice to see something more original in the subgenre. From the moment I first saw it, KeyWe seemed fresh. It’s a little ditty about Debra and Jeff, a pair of tiny kiwis who have their mailroom work cut out for them. 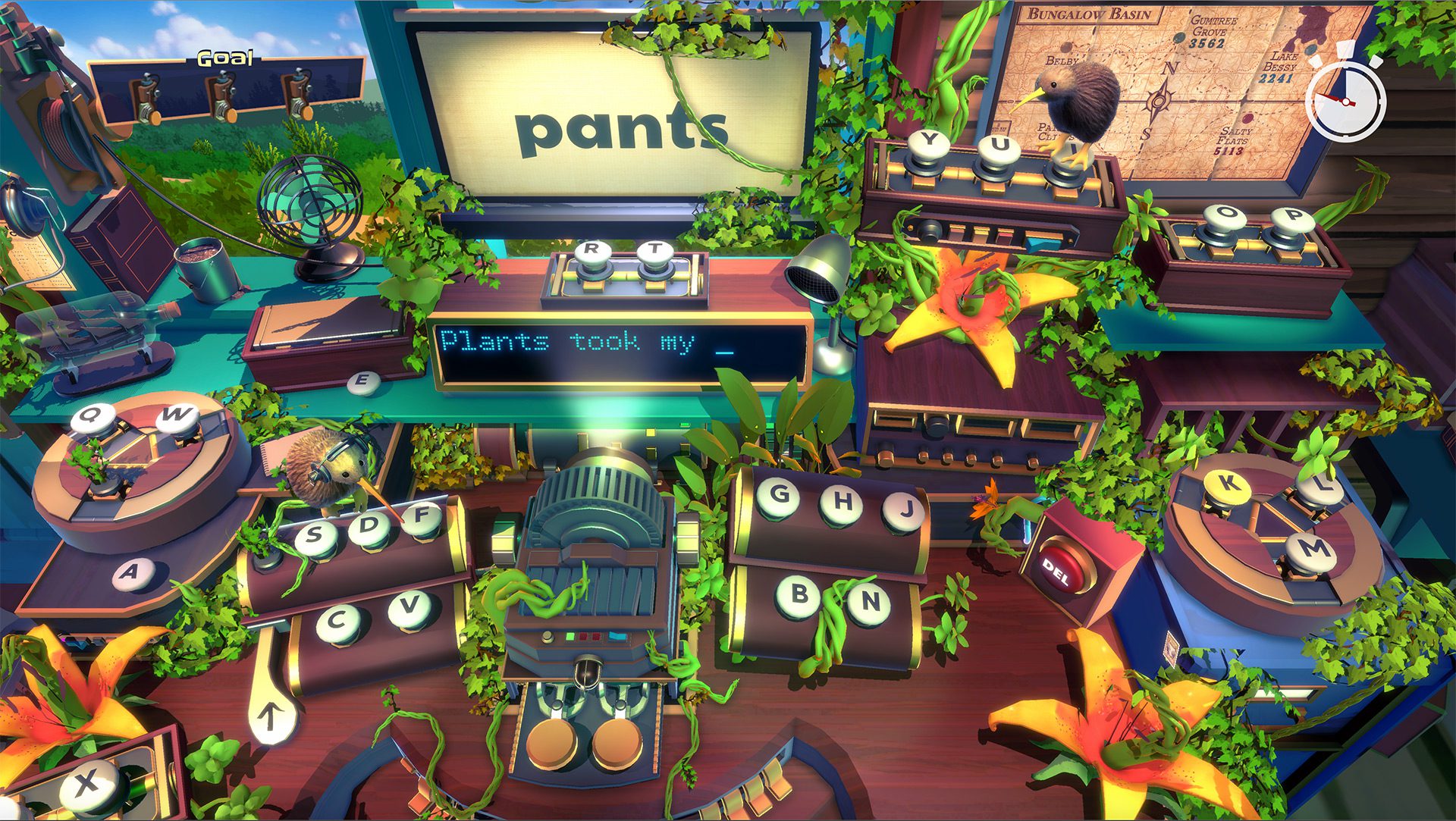 These new hires have to get the mail where it needs to go, and that’s a tall order.

Sometimes, you’ll have to work together to type out messages one word — and ultimately one letter — at a time by stomping on keys. In other stages, you have to lug around boxes so they slide into their correct bin, or compose a message with butt-stampable word fragments, or pack boxes with the right shipping info and warning labels.

This is an interesting concept for a communicative co-op game in general — where you have to break off to accomplish tasks individually, and then circle back together every so often — but the fact that you’re controlling two little kiwi birds makes it extra special.

Unlike a lot of the Overcooked admirers and imitators, which tend to involve running around and one or two button inputs at most, KeyWe is not afraid to test players.

Straight up, this can be a deceptively tricky game, not just in terms of hitting the right button at the right time — you’ve got a chirp, peck, jump, dash, and a butt-slam — but also in terms of talking it out with your partner. (The game is playable solo, with a hot-swap and dual-wield option, but I can’t imagine.) It’s partially a visual challenge, sure (which for me is easier to communicate), but the puzzles are frequently wordy, too. Imagine two people trying to type the same phrase on a keyboard simultaneously using only one hand each; oh, and they each have a much-different WPM. See what I mean?

In KeyWe, the challenge is less about moving fast from object to object (though you’ll want to be efficient for the sake of bronze/silver/gold medals), and more about parsing information and clues to quickly and correctly figure out puzzle-based instructions. This setup can lead to some real heated co-op moments — even more so than in Overcooked.

Across 36 story mode levels, there are four main “types” of levels, which I’ve loosely summed up above. That said, each level has something new or different going on to keep the pacing up, whether it’s sprouting plants, pesky mayflies, coded messages, or holiday baking themes. KeyWe is split into three seasons — as in, real-world seasons, not video game content seasons — so it tries to make the most of its foundation. It succeeds.

As much as I preferred certain level types over others, and a few of the fleeting gimmicks were annoying to get through even after we figured out the “trick,” overall, it’s such a great foundation. I love the way that KeyWe gives you a bit of breathing room with its per-level tutorial demonstrations; you’re rarely thrown into the deep end with nothing to cling to. 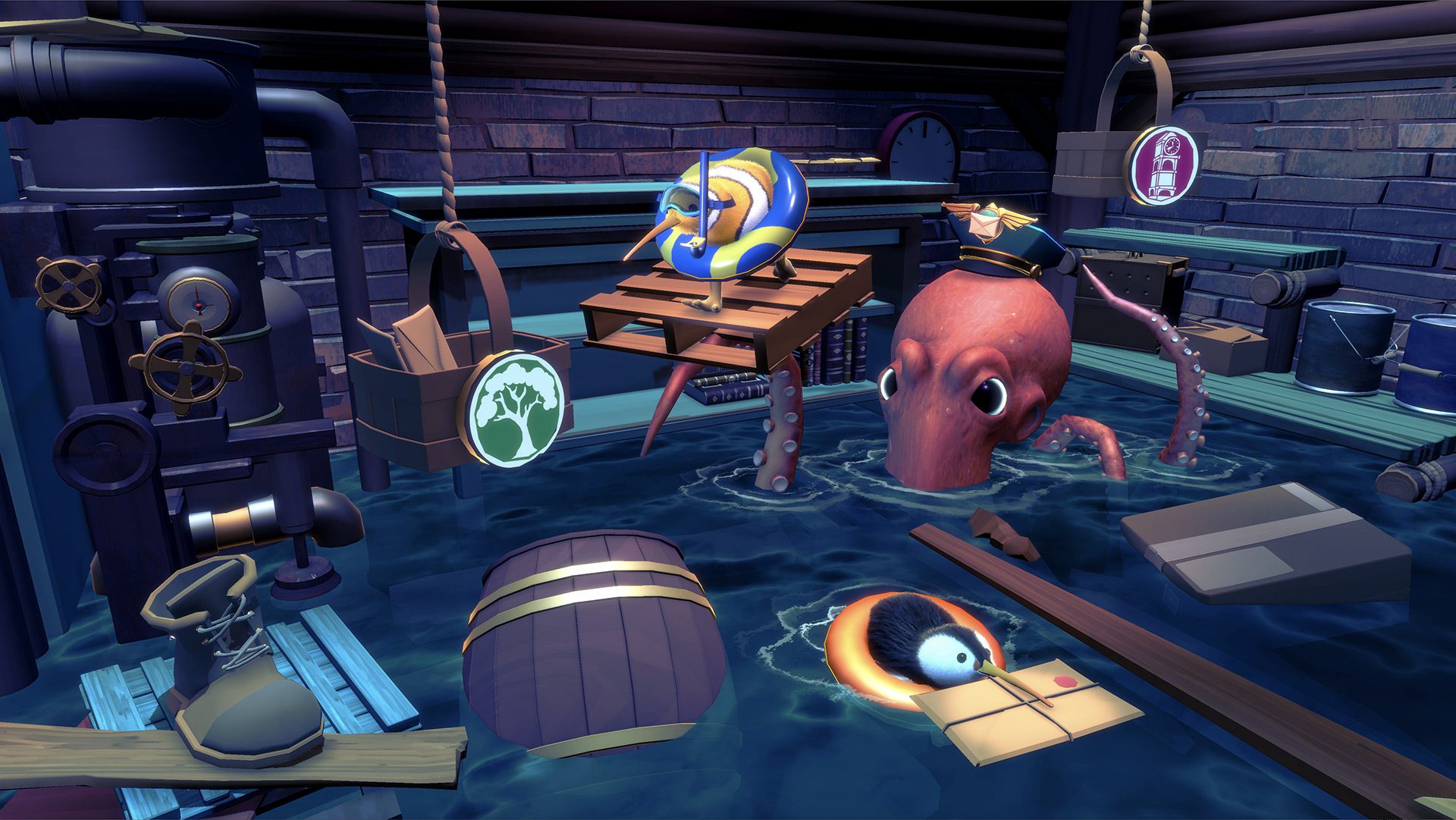 I’m also a huge fan of the mini-games to the point where, without them, I wouldn’t score KeyWe as highly. There are nine “overtime shift” activities, which run the gamut from a rhythm game to a side-scrolling platformer to a snowball fight with slingshots. My two favorites, Bubble Wrap Testing and Cashing Out, could be the basis for something bigger. The former is a race to pop bubble wrap (with bonus points awarded to different-sized bubbles at different times), and the latter is a bit of edutainment in which you’ll deposit coins worth varying amounts of money so they correctly add up to a specified total.

As you play main-stage levels and these mini-games, you’ll earn stamps, which are a currency used to buy cosmetics. KeyWe does a fantastic job with its customizable birds across five categories: facewear, hats, skins, backwear, and hairstyles. One glance at the shop and I knew I wanted to earn stamps asap to make a white fluffball. In co-op, any stamps you collect as a team will then be spent individually, so you don’t have to worry about agreeing to buy this or that or pooling funds — you can each buy what you want.

As an extra push to replay levels beyond stamps and high-score medals, there are also hidden collectibles. They’re listed in their own area accessible from the main menu, and you can spend your stamps to get hints about what levels the items are located in.

Real talk: I feel like I have enough on my plate just trying to go for gold. Silver can be tough, but KeyWe really makes you earn those gold accolades. They’re intimidating. 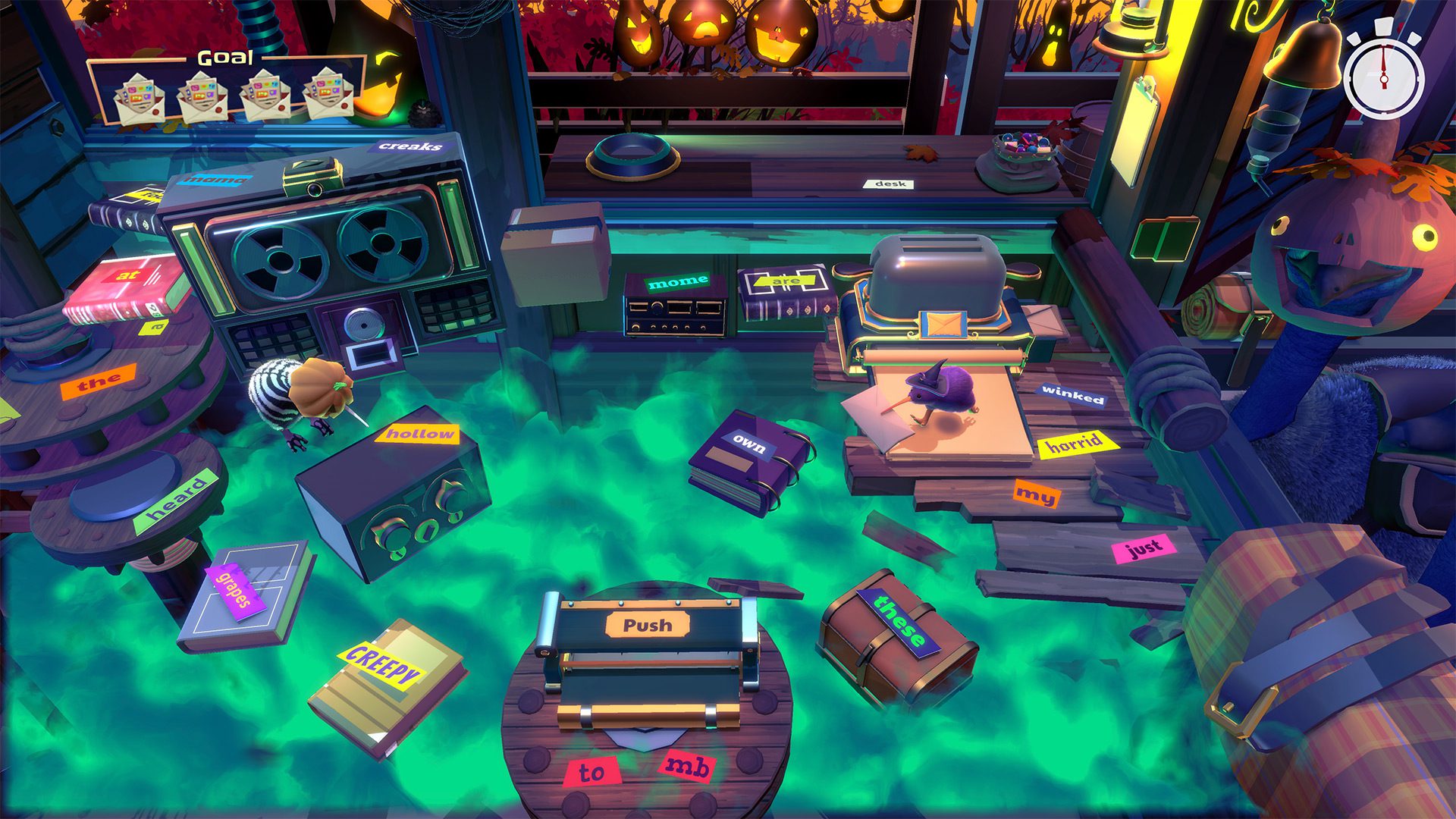 I wasn’t keeping an hour count, but this is a 2.5-sitting, beat-it-in-a-weekend game. And before you ask, yes, there is online co-op — but I was only able to play the game locally.

Prior to a last-minute delay for the Xbox and PlayStation versions of KeyWe, I was going to go with the latter option, assuming the Nintendo Switch edition probably wasn’t ideal. It’s not as crisp as it could be on other consoles, but you know what? The Switch is up to the task for this one. Performance-wise, I don’t have complaints about the frame rate. It’s smooth and stable enough, and it didn’t distract me once. I was pleasantly surprised.

That said, I do have nitpicky platforming control complaints. Sometimes, getting the birds to land on a ledge is more finicky than it needs to be, and the same goes for interacting with in-game buttons. It’s not a deal-breaker, but it stood out the more I played.

I’ll also caution folks with a smaller display (including the Switch in handheld mode), setups with far-off chairs, or whatever the case may be — certain levels in KeyWe involve little bits of text hidden around the environment, and they can be hard to make out.

Even if I have complaints here and there, all told, KeyWe is a delightfully panic-inducing co-op puzzle game. The level objectives are fun, the hazards are varied, the scattered story scenes are super cute, the cosmetic unlocks are worthy rewards, and the mini-games are meaningful enough to keep coming back to. If you’re feeling lucky, make it a date.