I might have never touched Kerbal Space Program had it not been offered as a review assignment. What a tremendous shame that would’ve been.

From a comfortable distance, I had seen enough of this hardcore rocket-building and space-exploration simulator to respect it, but I had also heard enough war stories to fear it (see: xkcd). “Maybe once it’s gone through Steam Early Access,” I’d always tell myself. That went on for years, up until last week when Squad released version 1.0 on Steam.

Time to to get out of my comfort zone. If other people can stick with Kerbal and learn from enough failures to pull off grand space escapades, there might be hope for me too. 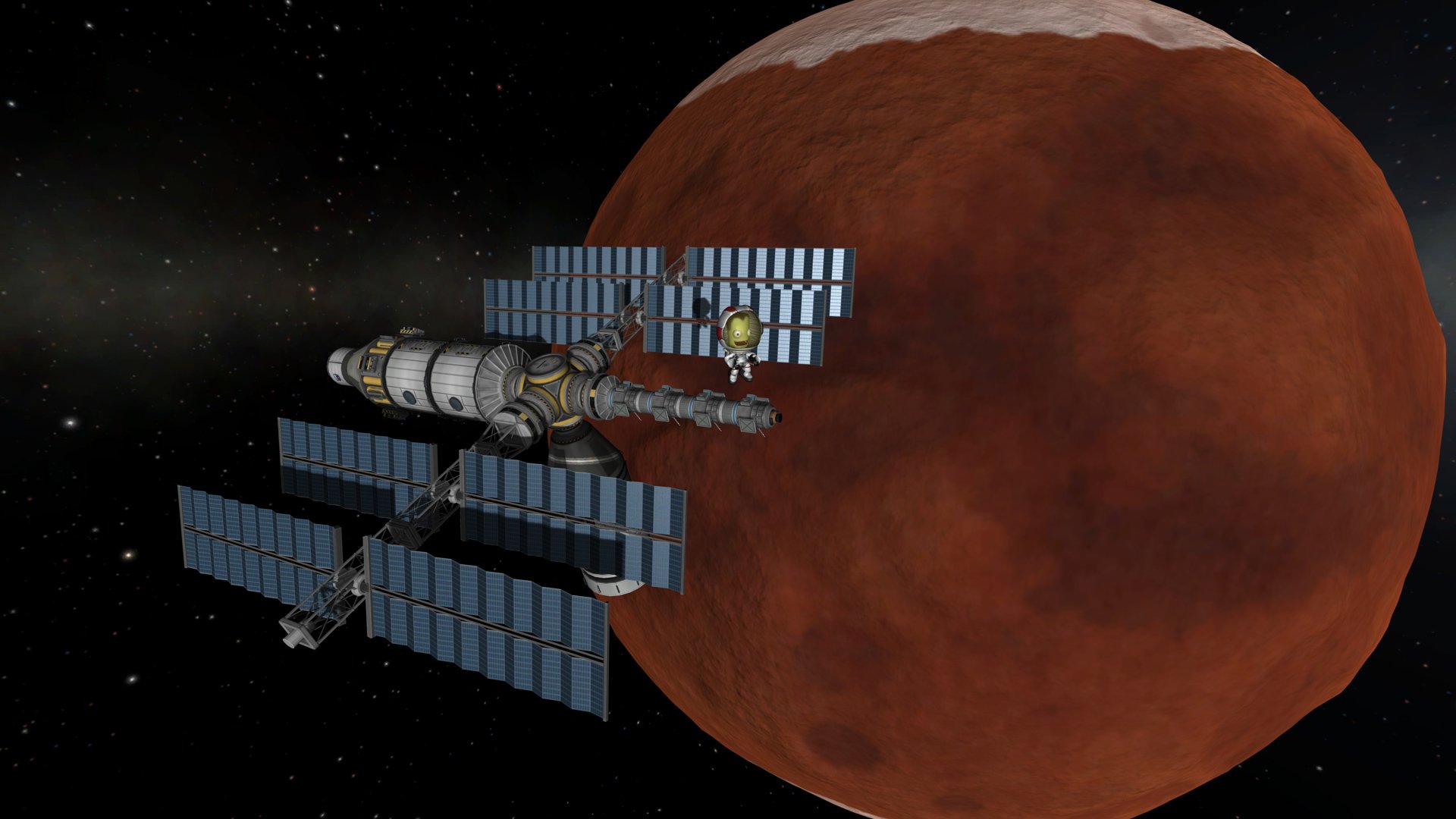 This is a game built to last. There are people out there spending hundreds of hours playing, learning, and teaching Kerbal Space Program and I’m not talking about some miniscule group of superfans. It’s the kind of game that, whether you like it or not, comes creeping into your mind when you’re supposed to be off doing literally anything else. It’s contagious.

There are a lot of deep, dense systems at play, and getting a handle on even the basics (knowing apoapsis from periapsis, prograde from retrograde) necessitates a commitment to learning real-world science and game mechanics before it “gets fun.” I mean, sure, cobbling together a rocket, to use that word loosely, is enjoyable. At first. But then I came to realize what was possible in this sandbox and grew restless, forever in search of the next self-set milestone. However much effort you put into Kerbal, you’ll get exponentially more back.

Early on, you’re met with one humbling experience after another. I went into the tutorials all bright-eyed and cheerful before the overwhelming reality of physics (my most dreaded subject in high school) came crashing down on me. The game’s cartoon alien astronauts, the Kerbals, are a welcome sight. Their oddball expressions and mannerisms help warm up what would otherwise be a cold, calculated simulation. Not long into a training mission, one of them told me the job at hand “should be pretty easy even if you’re not a famous rocket scientist like myself.”

Not a moment later, there I was, licking my wounds and wondering why that Kerbal had turned my home office into a house of lies. I’m not sure I’ve ever failed a videogame tutorial multiple times before. This is confidence-shattering stuff. My first hour or so is a blur by now, but I took notes along the way. “Intimidating homework,” I summarized. Reading instructions, re-reading them, trying to do what they describe, failing, then repeating the process and inching slightly closer to success — this is how it goes. Until, suddenly, it clicks. Bliss.

The first time my rocket lifted off correctly, I cracked a smile and laughed with astonishment. It was joyous. Incredible. Then the thing started spinning out of control and the Kerbals trapped inside were doomed. I knew it, but did they? Those poor, brave, totally naive little green men. Upon failing the lesson, my instructor said he wasn’t expecting disaster to strike. Personally, I had been counting the seconds. It gets better, though. You, the player, get better.

On Twitter, I was told to seek out community-made guides and I’ll echo that advice. The in-game tutorials aren’t nearly as clear or hands-on as I would’ve liked, and a lack of grammatical polish didn’t make using them any easier. Walkthroughs and wikis might as well be mandatory. There are folks out there like Scott Manley who are producing exceptional videos, and I’d be so lost without them. The simple act of watching someone else solve a problem — escaping the atmosphere without burning an obscene amount of fuel, matching a distant vessel’s orbit, saving a Kerbal lost in space (sorry!) — can be enough to give you that edge.

Thankfully, constructing rockets is simple. You drag individual components onto a 3D stage and snap them together. It’s not quite building with LEGO bricks, but given the game’s complicated subject matter, it is surprisingly close. Which parts you select for your ship and in what order, however, can be overwhelming. That’s more of a problem in Sandbox mode, where you’re given total freedom with a vast list of similar-looking pieces, than in Career mode, where new technology trickles in as you grow your space program from the ground up.

Another surprise: the controls are, relative to learning astrodynamics, not too tough to figure out. The user interface is initially confusing, what with all of the gauges and that intimidating navigation ball to monitor, but Kerbal Space Program makes smart use of the keyboard. 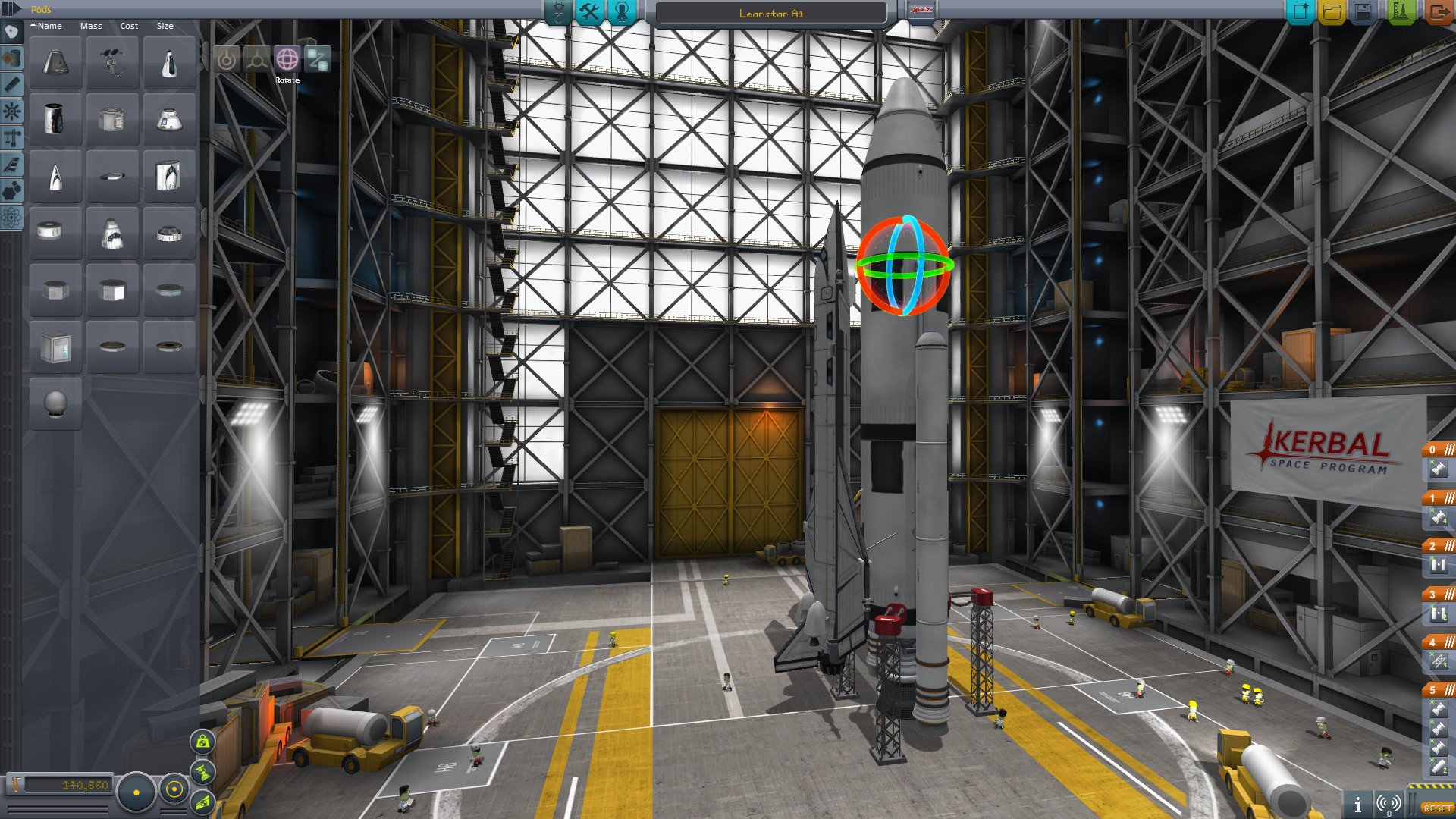 Cobbling together a bunch of ships and finally getting one of them to orbit the Earth-esque planet Kerbin for the first time is an awesome feeling. As in, awe-inspiring. It’s a big milestone — one I won’t soon forget — but there are countless more to tackle. You can switch to a map of space to track your vessel’s trajectory and set up maneuvers to reach, say, the Mun (moon), or an asteroid, or make the journey back home. Actually, you can do whatever you want — this is an open-ended game, after all — but maybe don’t sprint before you can crawl.

For me, there is such a thing as too little structure in games, and for that reason I found myself switching back and forth between Kerbal‘s Sandbox and Career modes. The latter has a tech tree and jobs for you to take on. Newcomers will find its scope far more comfortable.

As you gain science points by conducting research in the field and transmitting the data to your base (or physically bringing it and your spacecraft back safely to Kerbin’s surface), you’ll unlock access to more advanced gear. As you complete jobs — testing specific parts at certain speeds and altitudes, or taking tourists on a ride without killing them, for example — you’ll get funds to upgrade your space program. A third mode, Science, rests in between Sandbox and Career. You’ll still have to earn new parts by collecting science points, but, unlike Career mode, you won’t need to worry about your space program’s money or reputation woes. 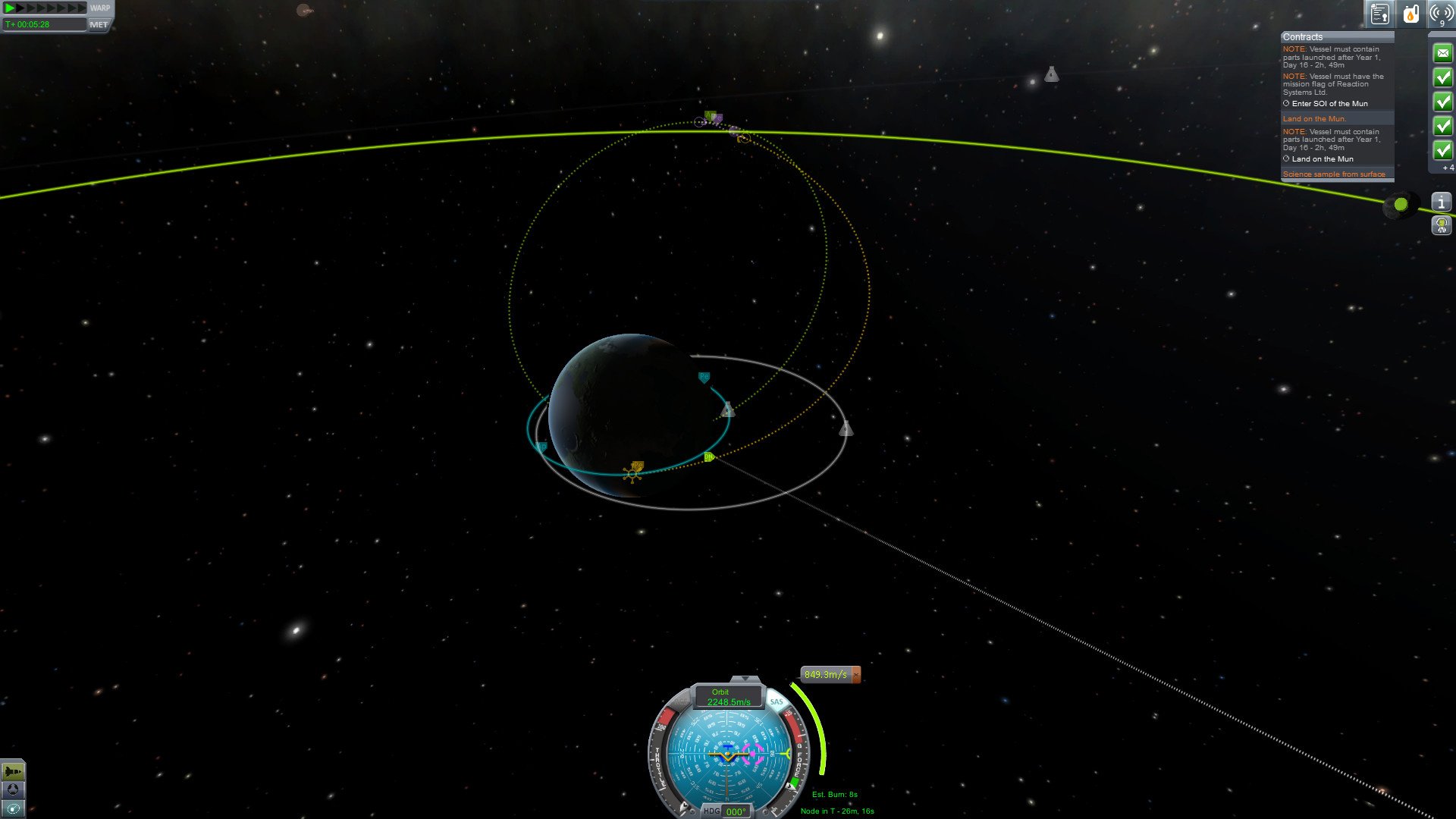 There are also several standalone scenarios, some of which were created in collaboration with NASA (get this game into schools!), that bypass the whole planning and building process and put you straight into an active mission. They’re a great worry-free practice environment.

Outside of those core modes, there are numerous mods to tinker with. The game has attracted a passionate, talented, dedicated community of players and creators. Even if the developers at Squad stop supporting Kerbal Space Program with new content and polish updates, I’m convinced this game will still be relevant a decade from now.

My main fear of simulation titles is that I’ll get bored. But, come to think of it, not once was I bored with Kerbal Space Program. I may have felt confused, and irritated, and hopeless at times, but those setbacks were fleeting. My desire to improve remains steadfast.

Even the smallest accomplishments feel like massive victories, and once you experience that euphoria, you won’t want to quit. Watch your ambition soar.