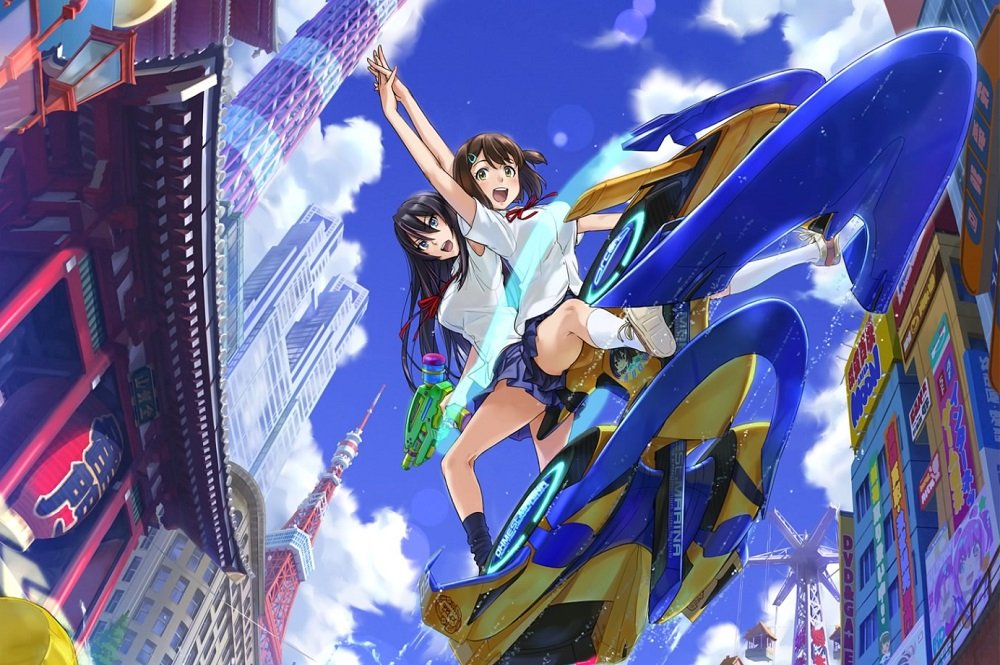 If there’s one thing that anime has proven most adept at, it’s gathering together a gaggle of doe-eyed, sexually-charged women and tossing them into a mixer with a random sport, occupation, or hobby, usually creating a successful multi-media franchise in the process. Kandagawa Jet Girls is no exception.

Launching as a TNK-produced anime series in the fall of 2019, Kandagawa Jet Girls is a brand still very much in its infancy, having not yet quite developed the full range of movies, toys, OVAs, manga, and body pillows that often spawn from such franchises. It does have its first video game, however, which launched in Japan in January, courtesy of Senran Kagura publisher Marvelous.

Still, the appeal of anime is not strictly limited to the borders of Japan, and so Xseed Games has taken upon itself to localise this all-women’s jet-ski extravaganza for cheesecake fans over on the western shores. So slap on some sunscreen, put on your best swimsuit, and let’s dive into the action.

Oh, and a warning to the first four rows: You Will Get Wet.

Kandagawa Jet Girls, like the Senran Kagura titles before it, offers a surprisingly deep package of contents. Players can run the gauntlet of teams through an original story mode, play custom free races, jump online for multiplayer action, or spend hours redressing all of the cast – and their water-tearing “jet-machines” – in Marvelous’ tried and tested “Dressing Room” mode (though Senran Kagura devotees should note there’s no creepy, gropey “Intimacy” games here).

Story Mode follows our titular heroes Rin and Misa as they meet, team-up, and then fall in with a large cast of fellow jetters, ultimately clashing in an all-women jet-ski tournament. These delightful characters include goth-lolita faction DRESS, pop idols Hell’s Kitchen, cosy beach-babes MKHU, and shrine maidens Suiryukai. The characters are tropey, but immensely likable, and the time spent watching them interact in goofy, dialogue-driven cut-scenes is enjoyable, given life with expressive and attractive character models. The script itself is also gently humorous, and even a little heartwarming.

As you play through the story, our wave-riding duos are pitted against each other in jetter races – for pride, for honor, for the last dolphin key-ring in the store (no, really). The races take place on a variety of cityside courses that – along with the rest of the visuals – literally sparkle with colour. Make no mistake about it, Kandagawa Jet Girls is a lovely looking game, daubed in a pleasing palette and presented with a visual style that really “pops.”

Then the green flag drops, and reality hits you like a bucket of ice.

All Kandagawa Jet Girls needed to be was – for want of expression – Mario Kart on water. There are clear design elements emphasising that this was the initial idea. Speed boosts, power-ups, and a large arsenal of weapons and specials are all available to utilise in battle, along with power drifts and signature stunts. The problem is, for all of its ideas, Jet Girls just isn’t all that much fun to play.

Gameplay is sluggish, water physics are acceptable-but-not-great, and the courses are short, tight, and lack variety. Worst of all, the slow gameplay seems to be an unfortunate side-effect of how great everything looks, with the screen perpetually “jittering,” as if going any faster would cause the frame rate to blow out entirely. Reviewed on PS4, I do not know (as of this writing) whether the PC edition has superior performance in this regard.

My initial concern about Jet Girls was that the racing mechanics would be too simplistic, but that isn’t actually the issue here. Jet Girls does add depth through nose control, chargeable speed boosts, power drifts, and unique weapons that have specific ranges and uses. Alongside this, players can also upgrade their jet-machines, improving speed, acceleration, or turning power, but the effect is negligible. There’s no denying that efforts have been made to create an enjoyable arcade jet-ski racer. But in practice, Jet Girls simply fails to excite. A sense of urgent, pulse-pounding speed just isn’t there, while the weapon system seems ungainly in the face of just jetting ahead of the pack and taking the chequered flag.

Back on dry land, players can dive into a host of fun side-features. These include a small selection of simplistic and silly mini-games that are surprisingly addictive, if short-lived. These include a QTE in which your chosen gal washes her jet-machine, a bizarre mopping runner, and a treadmill button-masher. Points earned from these games can then be spent in store on customisation items for the cast and their jet-machines, such as clothes, accessories, decals, stickers, and upgrades. There is also an unlockable gallery, featuring attractive character art.

Like most of Marvelous’ “Anime Girl” games, Kandagawa Jet Girls is high on personal customisation options, players can choose to race as any pairing of jetters they wish, on any jet-machine they wish, whilst hours can be spent purchasing and trying on clothes, swimsuits, hairstyles, and accessories in the Dressing Room. You can zoom right in on the feet… Erm, if that’s what you want to do, of course. You. Not me. As with similar titles, there’s a lot of depth to the “dress up” aspects of Jet Girls, so if that’s what you dig the most about the Marvelous catalogue, then you won’t be disappointed.

While Kandagawa Jet Girls does include online play, I was unable to find a single race, despite the title being available in Japan (and on import) for months. While this is purely speculation on my part, I don’t expect this title to cultivate a solid, long-lived community, so I’d think hard and fast about online play unless you have fellow Jet Girls fans to hook up with. Also, there is no local multiplayer, perhaps due to how insanely cramped a split-screen mode would be.

Ultimately, the most disappointing aspect of Kandagawa Jet Girls is how frustratingly close it comes to being recommendable. It’s bright, colourful, and good-natured. It’s full of entertaining and affable characters. It has a deep customisation system, some silly side-games, and even attempts to give its core jet-ski action depth and complexity. Unfortunately, this is all undone by the simple fact that said jet-ski action is disengaging, even boring. And given that this is a core element of the gameplay, that flaw is pretty fatal.

Fans of the anime will definitely find some fun in the title and enjoy its story mode – but for $50? Well, that’s between you and your wallet. My suggestion – if you really want to check it out – would be to grab it cheap, ramp up the difficulty, and grind out the jet-ski upgrades as quickly as possible. Also, find some like-minded pals.

Kandagawa Jet Girls delights with its boisterous, glowing presentation, cast of vibrant characters, and array of fun side-attractions. But the jet-ski action itself is mostly dull, struggling to offer a decent challenge or a genuine sense of speed. Jet Girls rides waves of goodwill thanks to its infectious personality, but this eventually gives way to tepid, monotonous gameplay, hampering what could have been one of Marvelous’ best releases yet.