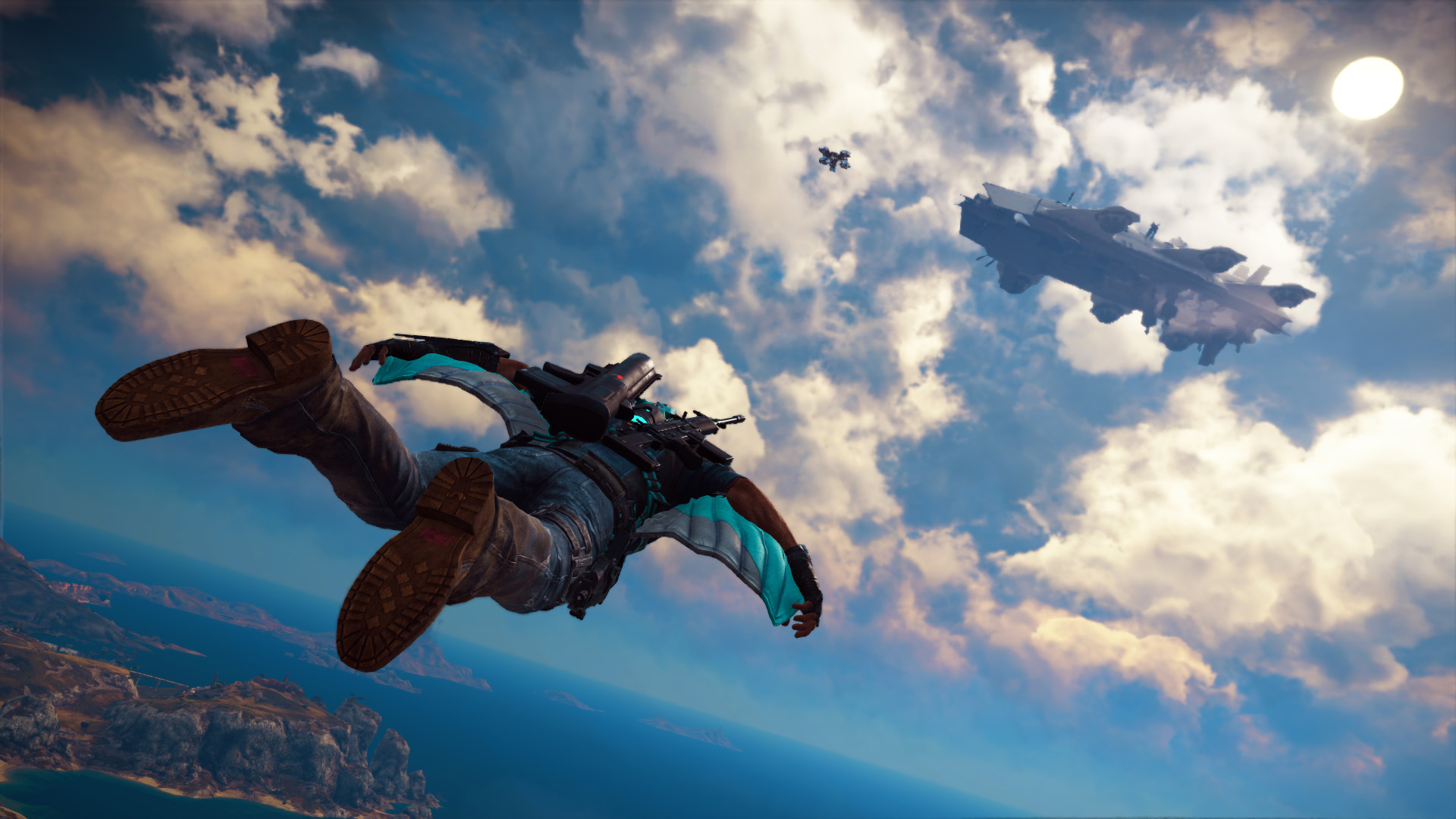 What if Spider-Man was also Iron Man?

The first round of Just Cause 3‘s “Air, Land, and Sea” expansion, Sky Fortress, is out now and certainly fulfills the “air” qualification. Rico gets a fancy new upgrade to his wingsuit, which was easily the best part of the core game.

That being said, upgrades can make people lose touch with what they really loved in the first place. 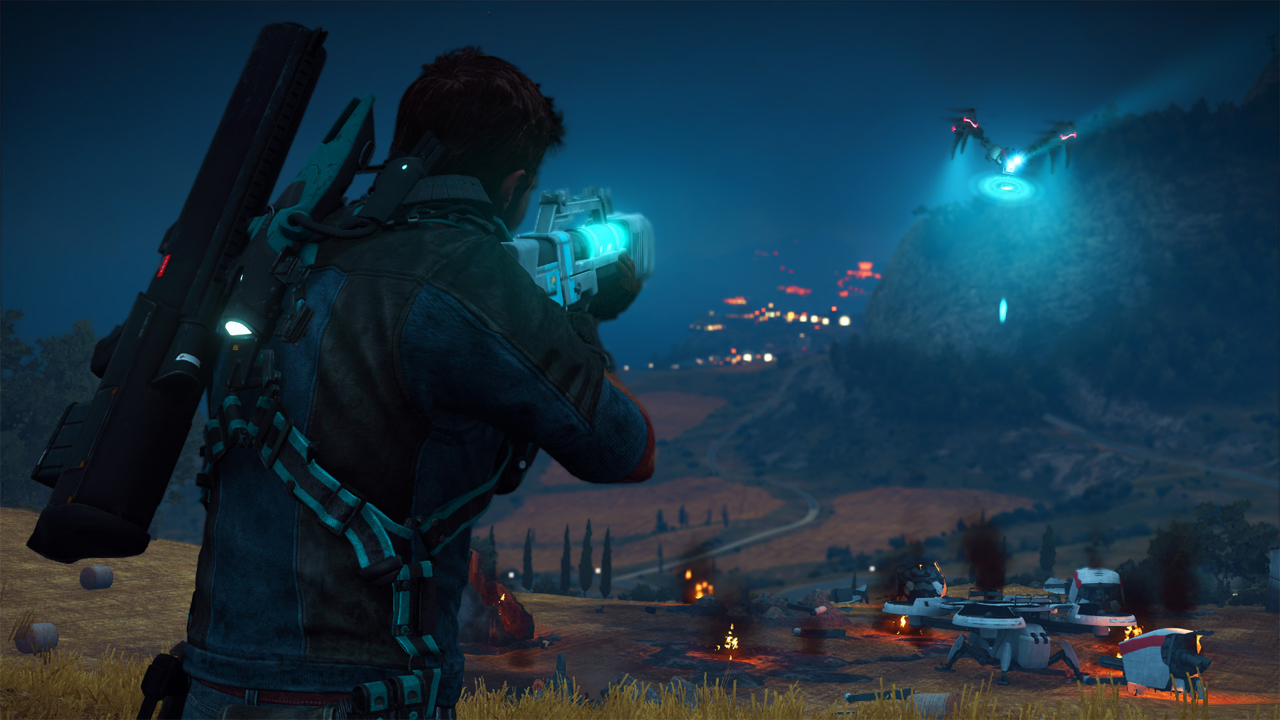 What little story is here is told through static image cutscenes. Well, technically they move thanks to the wonder of parallax imagery, but that hardly counts. A high-tech corporation named eDEN is seeking out the island’s key resource: Bavarium. So, they show up with their gigantic freakin’ Sky Fortress and waves of deadly drones. The voice acting is still enjoyable, though there’s not much of the classic Rico wit and humor which defines the character.

It’s rather short, clocking it at under two hours to get through the missions. There are no requirements to starting the first mission, other than having access to the world at large, so don’t worry about spoilers coming up or finishing the game first.

The biggest draw of the DLC is the upgraded wingsuit, which is really just a jet pack now. By holding a button, Rico takes to the skies and is able to literally fly around. There’s a limited boost gauge that keeps him airborne, and a “brake” to help turn. The new gadget can be used outside of the DLC missions once it’s obtained.

So, Rico is basically his own plane at this point. He can fly indefinitely, without the use of the tether cable. Yes, the boost is limited, but not limited enough to lose momentum and start falling. Hell, it even comes with a machine gun and missiles, because why wouldn’t it? Trying to aim felt incredibly awkward, since players need to move Rico to move the reticle (the same way a plane works). I was definitely better at it by the end of the DLC missions, but still didn’t feel comfortable with what I was doing.

My biggest gripe is how the new jet pack essentially eliminates any need for the original wingsuit. It always felt like a rush when zooming in close to the ground to gain momentum, and tethering to nearby trees, poles, or who-knows-what to keep going. With the jet pack, it’s simply pressing the boost button occasionally to stay flying. It’s possible to switch back, at least, but it’s a hard argument to make considering how efficient the upgrade is.

Don’t get me wrong, it’s a blast to fly around the Sky Fortress shooting at drones and blowing everything up. The flying base is split into two parts, the Stern and the Bow, both of which need to be liberated by, of course, blowing up all the things it tells you to blow up. Considering mission variety was easily the biggest issue with Just Cause 3, I was hoping to see new avenues explored with the DLC, but left disappointed.

The fortress, much like the game’s creativity, is stagnant. It doesn’t fly around the map or even circle in place. It’s just…there. In that one spot. Forever. The drones don’t even make an appearance on the island occasionally; after the DLC is completed, you won’t see any of them unless you approach the Sky Fortress for some reason. 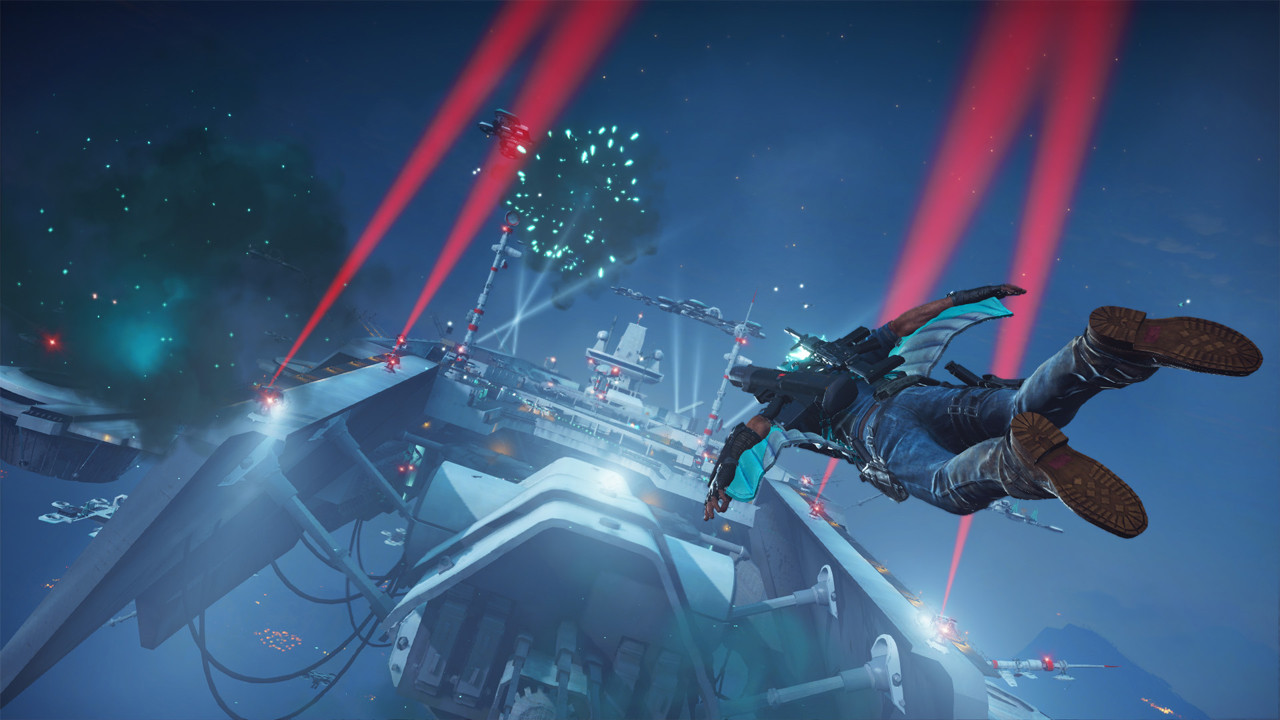 There are also four challenges, which help get gears for the jet pack’s upgrade system. They’re essentially exactly what you might expect: mostly just flying through rings. As for the upgrades themselves, none are particularly interesting and only serve to make the jet pack more efficient.

There are no new vehicles, but players do gain the ability to call a drone down in a supply drop. It’s pretty neat, but has an incredibly long cooldown before it can be used again. Plus, it’s completely autonomous, so there’s no joy to be had in piloting it. Oh, and there’s also a new rifle. It’s nothing special.

If you’re looking for a reason to jump back into Just Cause 3, the biggest draw with the Sky Fortress DLC is easily the addition of the jet pack. It’s great to fly around in, but it never reaches the same excitement as the old-fashioned wingsuit. The missions don’t do anything interesting and the straightforward story is told with static images, making Sky Fortress the definition of mediocre.