The little 4X that could

It seems that once you are done being one of the high-ranking developers of a Civilization game, you suddenly feel the need to take that experience and set off on your own journey to create something new and exciting for the strategy genre. After working on Civilization IV, Soren Johnson set out to make the criminally overlooked RTS Offworld Trading Company. Civilization II‘s designer Brian Reynolds went on to create the Rise of Nations series. And now, Civilization V‘s designer Jon Shafer has stepped out on his own to leave his mark on the strategy genre with At the Gates. 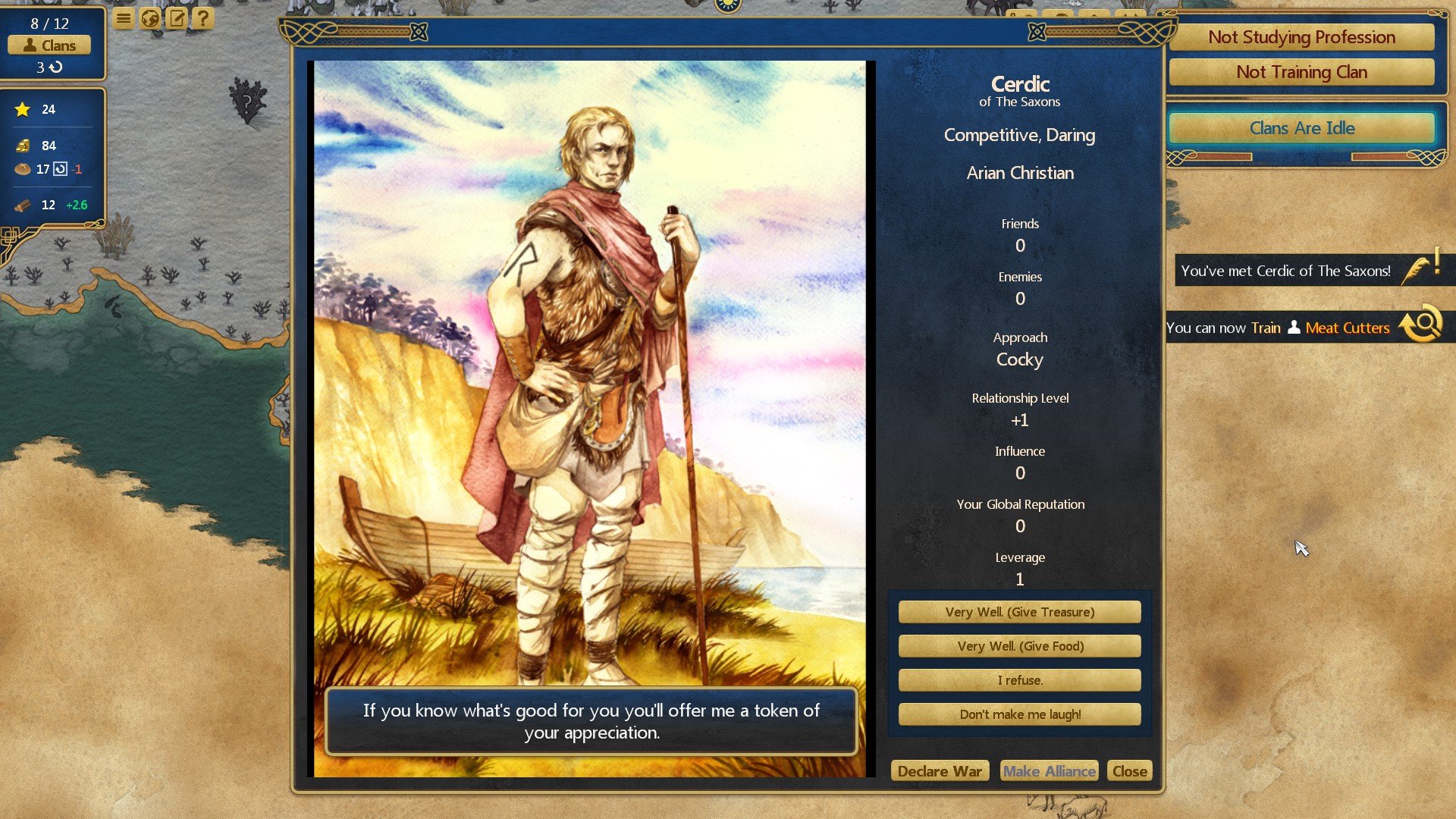 Jon Shafer’s At the Gates is a turn-based 4X strategy game set near the end of the fall of the Roman Empire. You play as a tribe that has set out on their own to make their way away from the tyranny and corruption of the Roman Empire. Using clans that join your tribe, you explore, expand, and exploit the land around you, and if the spirit wills, you exterminate your neighbors in your quest to overcome the once-great Roman Empire.

When you start out in At the Gates, you are given the choice of which clan you want to play as. Each clan has their own advantages such as more resources from the start or even being better pillagers. Right from the beginning, there is a unique feel to this game as you need to unlock the ability to play as a clan other than the Goths by either conquering or allying with the clan in a previous game.

In-game, you are thrown into a world that is similar to ancient Europe but with procedurally generated resources. Each turn represents a half month and from the start, you have to learn to survive and give your tribe a sustainable economy by adapting to the resources available. In the early game, resources are finite, so you are expected to be nomadic as you use up the resources around you. You also need to gather supplies in the warm seasons because most food-bearing resources will cease up in the winter. If you are short on supplies or have a surplus you can trade them with a caravan that comes three times a year. In the early years of your tribe, the caravan is almost essential to your economy’s survival as you will not be able to find certain resources you need to function without expanding.

When you start you have a few clans and are given about a year’s worth of food to survive on. Clans are assigned jobs in the tribe that can range from finding and identifying resources, to harvesting said resources, spreading the good word of your tribe and attracting more clans, and all the way up to making the tribe run more efficiently. Each clan has a randomly assigned personality and desire for which profession they would like to end up in. If you go against their wishes there is a chance they will become upset and produce resources less efficiently. While most of the time it was easy to adhere to a clan’s wishes, there were a few times where I had to go against their wishes for the greater good.

Just like every settler ever in history, your first year is crucial to your survival. I know this because I screwed up royally on my first tribe and didn’t find enough sources of food in the warm season and was screwed by the time my second spring came. While At the Gates is at its core a strategy game, it is this need to adapt to the world around you as well as the clans that join that really sets it apart and gives it an almost survival feel. There were times while I was playing that I had my plans for growing my economy completely wiped out by a new clan joining that had a desire to do a certain job. It was never frustrating, but felt deeper than your standard 4X game where you can just railroad your civilization into whichever victory path you want to take. Planning is made easier by the fact that you can assign notes to tiles or clans reminding yourself of where you want them to head in the future. It’s nothing groundbreaking but it’s so convenient that I have a feeling I’ll miss it in other games.

On victory paths, there are two ways to win At the Gates, either through conquering a Roman capital — thus proving your tribe as greater than the once-mighty empire — or through economic means by having five highly trained military units at your disposal. As someone who eschews violent takeovers in most strategy games, I was more drawn to the economic victory. At the time of writing, I’m well on my way to getting there soon, but for those of you who enjoy the art of war, there is always combat.

Combat is one area where At the Gates does nothing to set itself apart from its Civilization predecessor. You move your army next to the unit you want to attack and you right click and they fight. Badda bing, badda boring. While there is the unique option to besiege and starve out your opponent, it is almost more trouble than it is worth. Still, you can avoid conflict altogether by allying with other tribes, but to do that you are given scant few opportunities. You need to make a good first impression while not being seen as weak, and like the other resources in the game, you must accept that you will not be able to get it all. 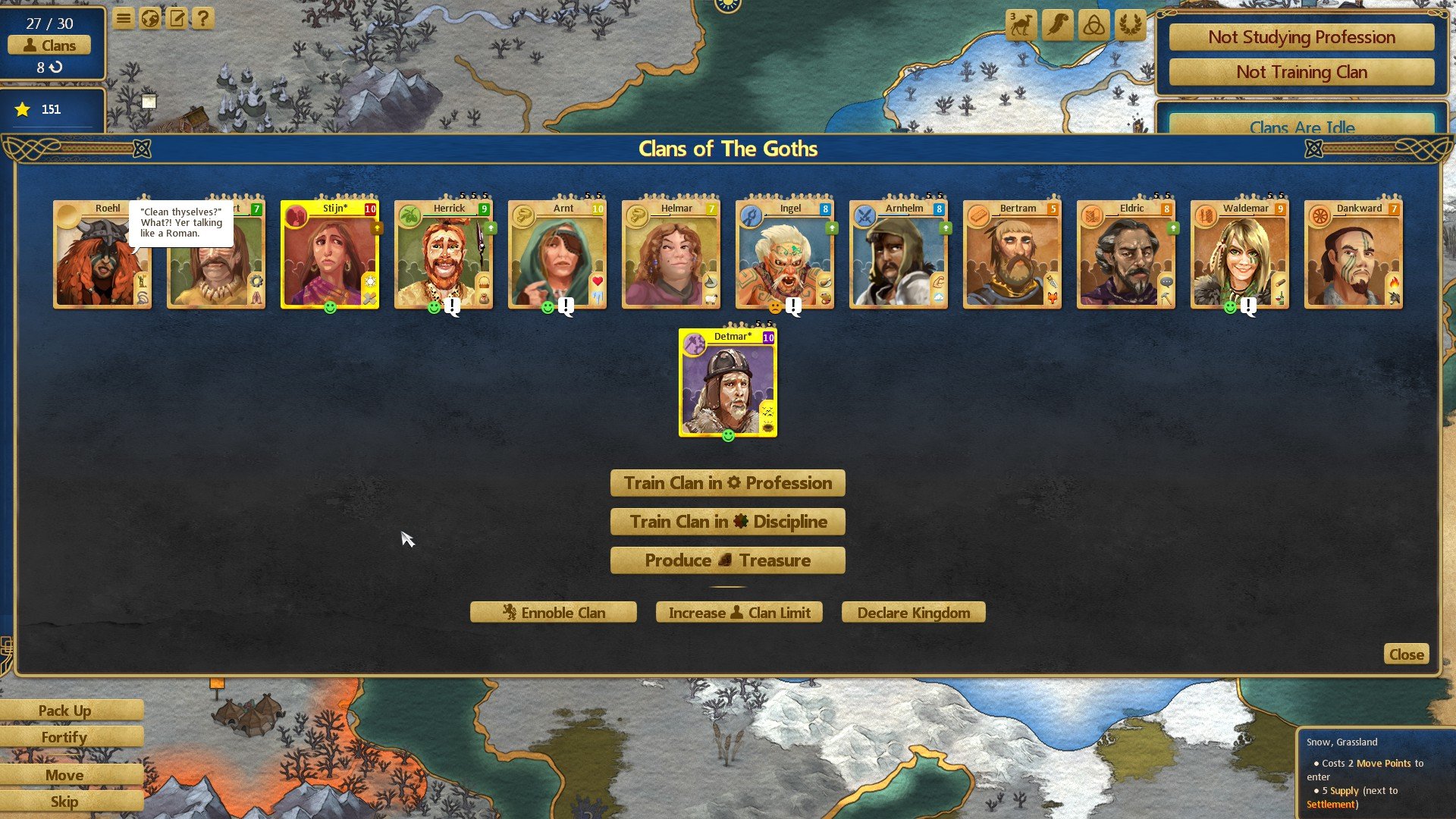 Like Civilization before it, the “one more turn” feel is in full effect. One night I decided to play a bit prior to bed and before I knew it was well past the time I like to log off. I realized if I hadn’t seen the time on my cell phone, I could have gone for much longer. I think the fact that the music is only used for events and you usually only hear ambient sound effects really allows you to sink into your virtual world and lose track of time in the real world.

While it adds almost nothing to the gameplay, the artwork has this beautiful watercolor look to it that gives the game an indie feeling and makes the clans feel more real, rather than just a unit at your disposal. That indie feel is not just limited to the artwork, or positive for that matter. For example, the save file system feels very cobbled together as each turn the game saves your world as a separate file which can easily lead to bloat on the hard drive. There’s an option to delete old files but it still feels like something you’d expect from a new programmer, not a veteran.

In my pre-retail release copy, there were also a few missing lines in the higher-level job descriptions, to the point where I didn’t even know what the job would do so I stayed away from it. The descriptions should be fixed in the 1.0 version that is supposed to come out on release day, I’m sure, but this did hinder my ability to progress a bit in the late game. I don’t think this missing info would be as glaring if the description system wasn’t so intuitive otherwise. Any job description has highlighted words in it that you can hover over and learn more about so that you are never lost when it comes to knowing which path to take.

At the Gates has a ton going for it, and this is easily the most addicted I’ve gotten to a game that I am reviewing. Although the replay value might not be as vast as some of the bigger 4X games on the market, it has enough of a unique and condensed feel that by the time you’re getting ready to make moves to win, it hasn’t overstayed its welcome by 20 hours.