The team at Hello Games got an opportunity that I wish more studios, particularly those smaller companies with limited budgets, would get: an honest-to-goodness second chance.

Not to say that Joe Danger was a bad game in need of a redo when it originally released on PlayStation Network. Far from it! We gave it a 9 out of 10, after all. But, at some point, you have to stop adding features and put your game out for the world to see.

More than a year after the launch on PSN, the definitive version of Joe Danger has come out. The twist, however, is that it’s available exclusively on Xbox Live Arcade.

To provide a basic overview for new players not wanting to read the entire aforementioned review, Joe Danger is a happy hybrid of racing, platforming, and puzzling. Tricks are performed with the left and right bumpers, and are how you earn boost. You’re given a great deal of control — crouching jumps allow for greater height, for instance, and acceleration/reverse can be used to maneuver Joe forward or backward while he’s in the air. The end result is a control scheme which feels natural.

The immediate comparison for Xbox 360 players to draw is Trials HD, which is a decent enough starting point. Whereas RedLynx provided an experience most of us struggled to survive, Hello Games largely goes for the opposite end of the spectrum.

Joe Danger is simple in all the right ways, which very much seems to be by design. If there’s fat in need of being trimmed, I haven’t found it yet. It’s the type of colorful, enjoyable, ageless entertainment that’s suitable for the whole family. I’m reminded of the days when the ESRB still used its Kids to Adult rating.

Though the game ultimately culminates in demanding courses which may or may not result in the occasional swear, the build up is gradual to the point where this fact isn’t obvious until you go back to the beginning levels; their simplicity seems laughable by comparison.

Getting frustrated by a botched combo, or the unforgiving end-game content, is a weird experience. On the one hand, you were so close, but on the other, Joe Danger is a game in which one background ad depicts a gentlemanly dinosaur mascot for Tea Rex brand tea. I can’t stay mad at you. 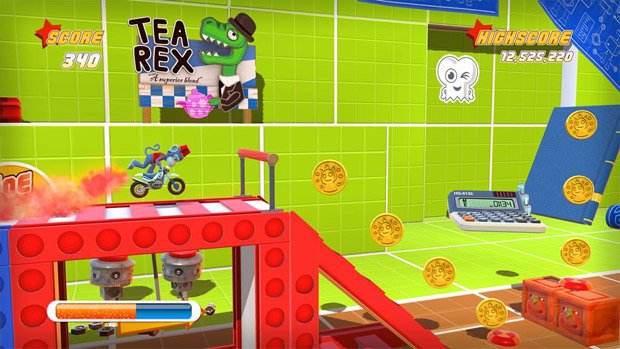 Splitscreen multiplayer and the sandbox-style level editor also make a return. The latter deserves a special mention for its rapid-prototyping philosophy. They even managed to smartly incorporate tutorials for it as “puzzle” courses within the core single-player mode.

Okay, so what’s new? Better anti-aliasing, new playable characters, “80% faster loading times” (!!!), The Lab, and Pro Medals. Those last two I’ll need to expand upon, but — as if my crazed use of exclamation marks didn’t stress this enough — quicker loads for a game of this nature is hugely important. Particularly for those who want to get wrapped up in leaderboard dueling with rivals.

The Lab is like a shorter, alternate-universe take on the standard Joe Danger experience. Your progression in it is separate from that of Career Mode, and for good reason. While there are far fewer levels on offer (25), they’re some of the more interesting, engaging courses in Special Edition.

Due to the compactness of levels in The Lab, you’re expected to perform well, in a short amount of time, with all of the tricks in the book being thrown your way. The end-stage Assault Courses combine prior lessons and expect nothing short of excellence from the player. 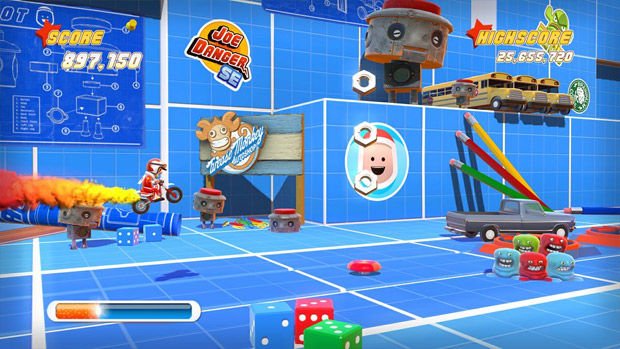 Now, on to Pro Medals. In Joe Danger, getting to the finish line is rarely enough — you have to earn stars along the way. Stars can be obtained by keeping a combo throughout an entire level, landing on targets, collecting coins, and clearing a course quickly, to name a few methods.

Not every star type is available for you to earn on every level, and the same can be said of Special Edition‘s 25 Pro Medals. These are awarded when you complete every star objective simultaneously in a single run. Easier said than done. Those tracks with a Pro Medal up for grabs are often the more challenging ones.

Unlockables such as characters and Xbox Live Avatar gear are attached to Pro Medals, so there’s incentive beyond simply aspiring to master the game. That said, you haven’t truly played Joe Danger until you’ve attempted to get some of these things. The end result is beautiful in its fluidity. 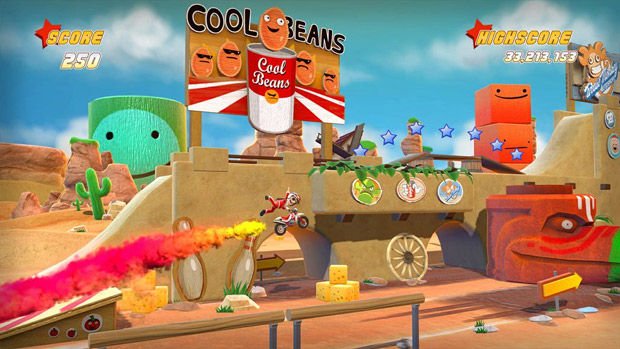 I’ll be coming back to Joe Danger for some time to come. In getting this review written for the game’s launch, I haven’t had too much extra time to go back and improve high scores to the best of my ability. With every new name added to the friends leaderboard, that urge will grow stronger.

Special Edition is indeed the definitive version, but not merely for a new audience; there’s just enough in here to warrant a double dip for even the more casual of returning players, especially when you consider how catered to the familiarized much of the additions are. This utterly delightful game is one everyone owes it to themselves to play.