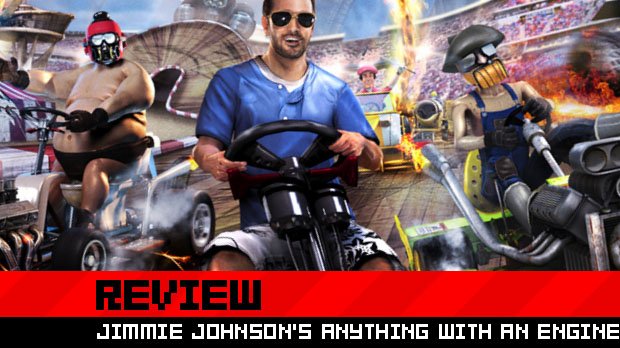 The game itself is full of the same unintentional comedy, but there’s a weirdly endearing element to the whole sordid affair. While Jimmie Johnson’s Anything With An Engine is far from what could be considered good, it’s still strangely likable.

Perhaps it’s a reviewer’s form of Stockholm Syndrome, or perhaps even a crap game deserves a player’s time now and then. Whatever the reason, I find it hard to hate this game, despite the likelihood of is deserving my contempt. 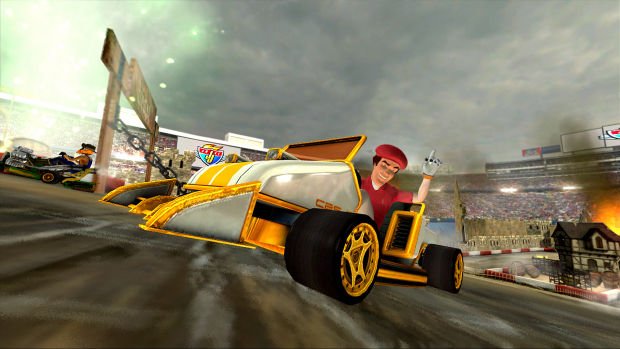 In Jimmie Johnson’s depraved and childlike world, a group of eccentric nincompoops have been able to turn a wide range of common objects into working race cars, that they may compete in all manner of wacky championships and prove which borderline offensive stereotype is the greatest. Their petty squabbles are looked upon with capricious amusement by the great and powerful Jimmie Johnson himself, NASCAR driver and sexual vulture.

The opening moments of the game, in which a photograph of Jimmie Johnson rises grandly from behind a desk to chat with poorly drawn CG characters (who never move) sets the tone for Anything With An Engine. It’s so dreadful that it almost verges on utter brilliance. This attitude permeates the entire kart racing experience — it’s such a poor game, but it’s strangely entertaining nevertheless.

With eight cups to compete in and a full-fledged online multiplayer mode (that nobody is playing), there’s a surprising wealth of content to this humble budget racer. Players can choose from a variety of racers, each with their own unique vehicles — Monster Trash drives around in a dumpster, Gotta Go San is a potentially racist portrayal of a sumo wrestler riding a toilet, and Kiss of Death is a New Orleans vampire in a motorized coffin. There are twelve drivers in all, including the great Jimmie himself, although some characters need to be unlocked by winning championships. 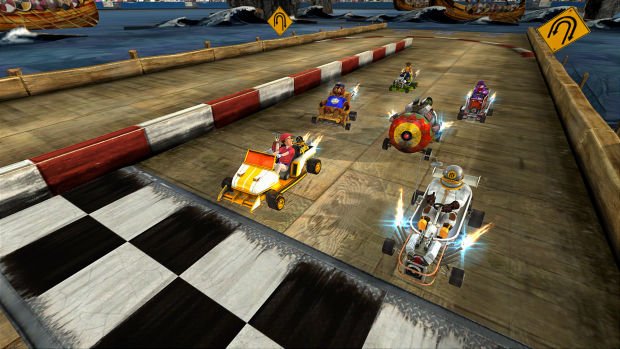 As with all kart racers, Anything With An Engine eschews realism for high speed action and weaponized competitions. In a departure from your typical kart game, players don’t randomly collect power-ups on the track. Instead, there are only four special powers — missiles, mines, rams and nitro boosts — which are unlocked and upgraded gradually be earning “votes” from the audience. Votes are earned by racing over special markers, damaging opponents, or performing powerslides. Although each character has a unique animation for each power-up, as well as varying statistics that govern their effectiveness, the abilities are mostly the same for every driver.

The stated goal of removing random power-ups was to eliminate “rubber banding” and make for more dynamic races. It’s ironic, then, that Jimmie Johnson’s Anything With An Engine actually features some of the most egregious rubber banding I’ve seen in a racing game. At any moment, the game can decide to shunt a player from first to last place, and one can clearly see how certain racers always manage to stay in the most competitive positions. No matter how good a race the player has, one false move can make the difference between winning and falling behind everybody, because the game keeps CPU drivers so close behind.

Interestingly, the same courtesy is not extended to the player. There are some races where it seems almost impossible to catch up to the opponent. Some of the characters are pretty poorly balanced, and those vehicles with bad acceleration or that swerve wildly are practically unusable. The only concession the game makes to trailing players is a special shortcut that opens up when it’s feeling merciful. This is not to say the game is particularly difficult, but it does mean that victory and defeat often feel more random than skill based. 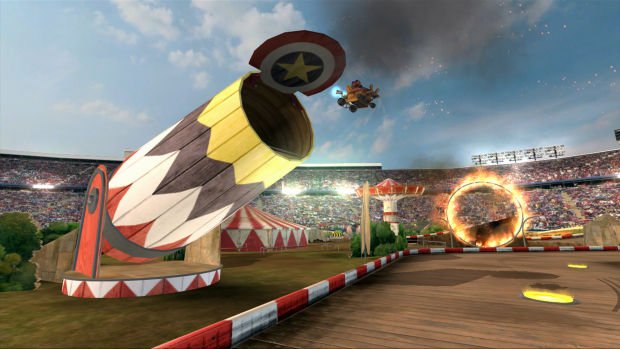 Every vehicle has a damage meter and a limited amount of power-up ammo, both of which can be replenished at pit stops. Once in a pit stop, cars slow down and the player must hammer a button to fix any damage. The use of pit stops provides a slight tactical bent to the action, as players need to accurately judge when best to pull in and when best to shrug off damage in order to press the advantage.

As well as regular races, there are all manner of exotic challenges lined up for each championship. Matador has two sets of drivers racing in opposite directions, while Endurance matches are long races that collect points based on a player’s position in each lap. Elimination is a “last man standing” game with trailing players intermittently removed, and time trials have players racing a ghostly arrow to best its lap time. Each championship ends with a one-on-one race against THE Jimmie Johnson, who is a cheating bastard but tends to go down pretty easily once players get used to the track.

The tracks themselves range from decently designed to utterly horrific. They are each filled with their own unique traps, obstacles and “wacky” aesthetics, and while some are quite fun to drive on, others are a mess of pitholes and ludicrous turns that very few cars can actually handle. If you get the wrong type of race on the wrong type of course, it can be a complete nightmare. Once again, it all comes down to luck. 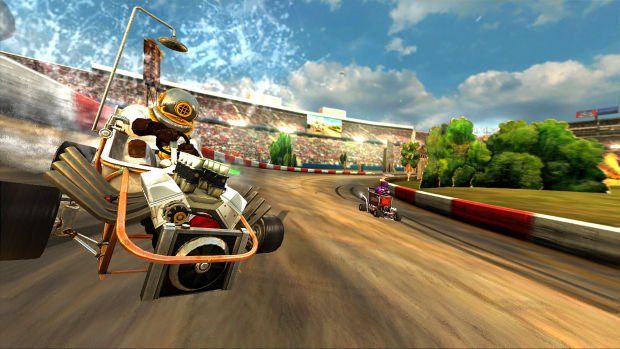 Engine‘s characters are surprisingly cool in terms of visual design, but the voice acting is absolutely dreadful. They’re the kind of affected, over-the-top archetypes that you can hear while flicking over to Cartoon Network, from snooty rich kids to crazy rednecks. The limited pool of torturous, unfunny catchphrases only compounds how irritating these horrible creatures are and it won’t be long before any sane player will plead for a mute button. Graphically, the game’s certainly simplistic, but it’s not altogether ugly. The colorful cartoon visuals certainly help.

Jimmie Johnson’s Anything With An Engine is not a good game, as I have attempted to stress. It is, however, perversely amusing and would actually make for a fun party distraction. It’s one of those rare games that, no matter how poorly I may score it, still comes as a recommended purchase. It’s a cheap little kart racer that will, at the very least, entertain via irony and still manages to be a competent — if broken in several ways — racer. Few videogames can claim to be “good in a bad way,” but Anything With An Engine definitely comes close.