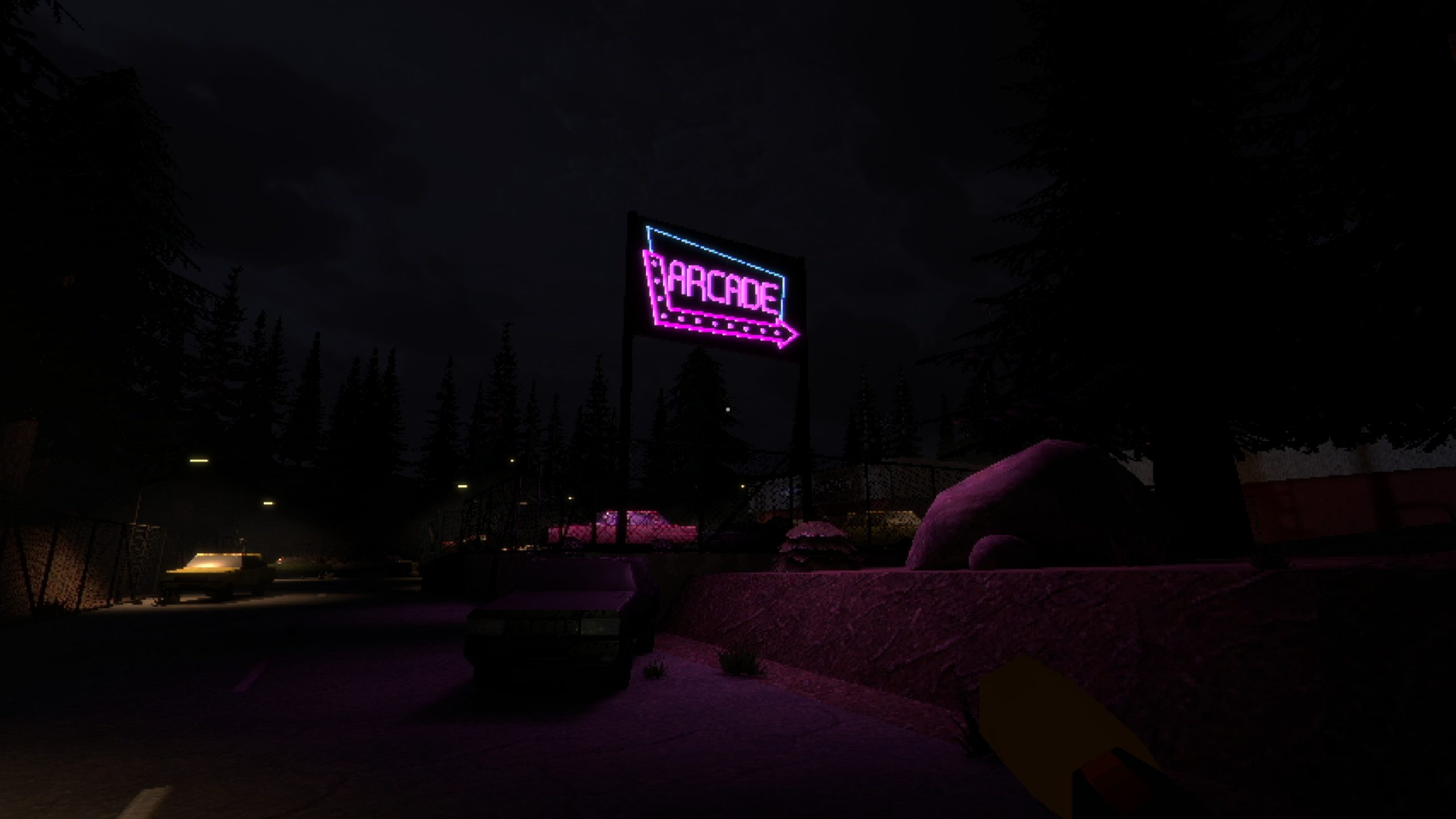 I won’t hurt you unless you cheat

I’ve been reviewing a lot of short-form horror games recently, and that can only mean one thing: a lot of short-form horror games have been getting released. I like them because they’re quick, inventive treats. Developers have become reasonably good at providing thrills and boners through the interactive medium, but someone’s fears are a constantly moving target. It’s fun to watch all the ways people think to hit that.

Janitor Bleeds tweaked my interest valve for a couple of reasons: it’s set in an arcade, and unraveling its mysteries requires you to play an old arcade cabinet. The “Janitor” in its name I had initially expected to be alluding to some grumpy old caretaker who haunts the place. Unfortunately, there is no such tortured soul shrieking about how hard it is to get nacho cheese out of the carpeting.

Your car is wrecked, and I don’t know how you managed to pull that one off. You hit a light post on the side of the gentlest curve imaginable. How did you miss that? Let me rephrase: how did you hit that? You were checking your phone again, weren’t you? Who’s been texting you? Is it that harlot from the office again? My mother was right about you.

You wind up in an abandoned arcade. After a bit of exploration, you find a cabinet stashed away called “Janitor” and inadvertently release a strange entity upon the darkened screens. You would think your job would simply be to leave or call for help, but I guess you want to explore the arcade. That might be fun if something wasn’t trying to kill you.

Janitor Bleeds is a linear experience. While you eventually open the entire arcade to explore, there’s a pretty strict sequence for things. Along the way, you continually encounter the mysterious Janitor game and use it to unlock the way forward. This is done through a variety of reality-bending puzzles. As you continue, you’re pursued by the entity. It’s a slasher horror set-up, but this one is hard to look at and casts an eerie light everywhere it goes. The thing is kind of imposing at first, but not the most credible threat.

It’s used sparingly at first, hinting at impending danger before it starts giving chase in earnest. It mostly shows up during specific sequences to add tension while you try to solve a puzzle. Then it wanders around ineffectively until it’s needed again. Even when you do get in deep with it, the entity really isn’t very effective. It tends to have difficulty navigating the environments, which just made me feel sorry for it.

Adding to this, the titular Janitor arcade game isn’t skill-based; it’s just for solving simple puzzles. It does its job blending reality and the cabinet, but it misses out on creating tension by making you focus while Janitor Bleeds tries to screw with you. There really isn’t a penalty for backing away from the game to check what a noise was or to hide from the entity.

Gameplay aside, I don’t think Janitor Bleeds is effective in building atmosphere, tension, or its narrative. There are notes scattered around that give the backstory of this strange arcade cabinet, but its effect on the arcade is disappointing. Without spoiling anything, greater attention to the backstory would have gone a long way to making the arcade a terrifying place to be.

The stakes aren’t communicated well. When you crash, one end of the road is blocked by a regular pine tree, while the other is pylons and wooden A-frames. The protagonist isn’t stranded; they’re just lazy. You’re corralled through the woods, which seems like the stupidest way to look for help.

And once you’re in the arcade, there isn’t much keeping you there. There’s no lost friend or deeper motivation. Nun Massacre had a missing kid. In Bloodwash, it was the only 24/7 laundromat, and you really needed clean clothes. The front entrance to Janitor Bleeds is blocked, but the back has a car in the way. There’s this vague implication that “the light” is drawing your character there, but it’s not enough to just say that in an interactive medium. Show, don’t tell.

There isn’t much that Janitor Bleeds really nails, which is the real shame. The concept itself is tantalizing enough, but the scares and the narrative needed more consideration. It neither subverts expectations nor does it execute standard horror cliches very well. It’s not a total wash, it just lands so consistently in the middle that it’s hard not to be disappointed. Like many of the games in the derelict arcade, this one is, unfortunately, out of order.