Ever since arcades in the West shut down in the late-90s, shoot-em-ups (or shmups) have faded in popularity as cinematic console games grew in favor.

In its place, Cave and a handful of Japanese indie developers have kept the genre alive — retuning the base of shooting and dodging bullets to appeal only to a very mad few. Complex scoring systems and screen-filling projectile patterns (“bullet hell”) became the new standard. Videos of Touhou games are posted online with titles like, “THIS IS THE HARDEST BOSS EVER!”

Those without the necessary skill wonder why anyone would bother. Until now! 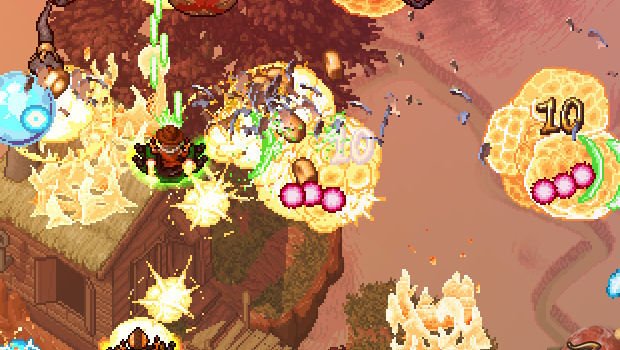 Jamestown is a decidedly different take on a genre few have kept up with, and it serves as an excellent entry point into the post-Cave era of shmups. It’s a welcome surprise on a platform that has few entries in the genre (PC) and is done with a great attention to detail. Even more surprising, it wasn’t made by an established Japanese developer. Rather, it’s the debut from three industry veterans, with no prior experience in the genre, based in Philadelphia.

It’s hard to recall the last game where you and three friends shoot down a Conquistador demigod wearing nothing but his underwear, all while dodging bullet patterns that will make most players wish they were wearing a pair themselves. This why I like Final Form Games’ debut — and pretty much any game worth a damn — it’s a fun and original experience whether played alone or with friends.

Jamestown is a homage to Takumi and Cave (both are thanked in the credits), but it is also an original vision with a brilliant aesthetic. The gorgeously realized pixel art, reminiscent of Metal Slug, is married to an epic score and polished design rarely seen in the genre. However, the game’s rich production values are paired with tried-and-true mechanics that keep the game approachable to newbies. 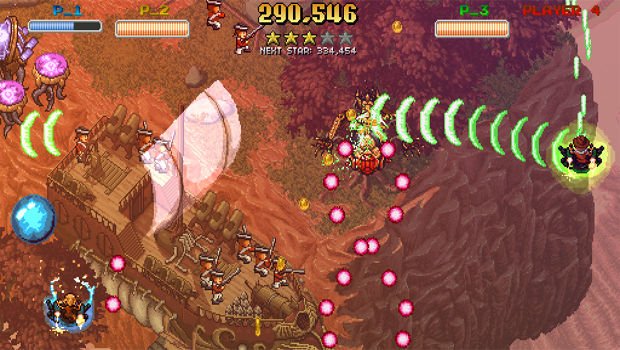 Regardless of which of the five difficulty levels you choose, the core of the game will remain the same. You shoot enemies, fire your secondary weapon, gather cogs from destroyed enemies and frequently activate Vaunt — a special mode that creates a temporary shield around your ship (a la Takumi’s Giga Wing), absorbing bullets while doubling your damage and score.

Vaunt can only be activated by filling a bar via cog drops and will only last as long as the player continues to pick-up cogs mid-Vaunt. Alternatively, the player can cancel out of Vaunt which will trigger a much smaller shield for a comparatively brief amount of time. Judging when to use this system is central to surviving walls of bullets and placing on the leaderboards.

Jamestown’s charm lies in how approachable its mechanics remain, while offering depth to genre veterans. There are no collectible power-ups to worry about losing, nor will you need to manage bomb usage because bombs don’t even exist in this game. Crazy, I know!

Getting a high score will require a bit of memorization, but it’s more dependant on maneuvering swiftly and hitting targets at the opportune moment — enemies can be destroyed during a “special” state, which will lead to more generous cog drops. The special state usually occurs when an enemy is about to explode or is mid-jump. This is about as complex as the scoring system gets. Otherwise, it’s just a case of perfecting your play until you manage to get a 60+ second Vaunt combo.

Each of Jamestown’s four ships has its own advantages and disadvantages, making for a unique stable of vessels. The introductory Beam ship (the remaining three must be unlocked) is a tribute to Donpachi, offering a primary weapon with a wide spread and a powerful beam for its secondary. You’ll eventually unlock the Charge ship which boasts powerful, chargeable (durr) projectiles. There is also the Bomber which drops devastating bombs that can be triggered by the player; however, its slow speed and limited range make it largely useless outside co-op. 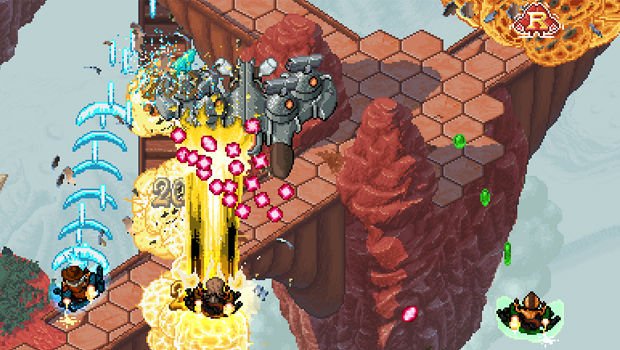 I had the most fun with the Gunner ship, which is the fastest and most versatile thanks to its alternate weapon that can be fired in any direction. Due to the game’s widescreen format and sluggish ships, it’s often impossible to hit all the enemy ships on-screen without the Gunner’s secondary weapon. It’s no coincidence that most of the top 100 solo leaderboard rankings use it. A few used the Beam ship, which wipes out larger enemies and bosses with ease. A fair-trade off, but one not worth taking on the highest difficulty (Judgement).

Big-eyed, large-breasted “moe” anime-girls might do something for Japanese Shmup fans, but the general cute-em-up aesthetic and attached childish storytelling (Otomedius, Trouble Witches) has turned away many Western gamers from exploring the genre. In contrast, Jamestown’s steampunk take on Colonial America is original and holds potential for crossover appeal. No large-breasted feline teens here, for better or worse.

There is a lot of imagination put into the game’s gorgeous enemy design, ships, cutscenes, and lavish backdrops that avoid looping areas and repetitive design. However, the meticulously detailed backdrops come at the cost of a screen that scrolls far too slow. The score, composed over a seven-month period, deserves a special mention. It captures a grandiosity in battle and a haunting atmosphere during cutscenes.

Stories in shmups usually don’t matter, because they are by-and-large terrible and secondary to everything else. Nevertheless, Final Form put considerable effort into telling a story that is as bizarre as it is strangely captivating. It centers around Sir Walter Raleigh and John Smith on the hunt for a power-hungry Spanish Conquistador who controls a seemingly endless fleet of aliens and massive spaceships. As you attempt to deter the Conquistador’s search for a legendary, omnipotent weapon, you’ll traverse mines, swamps and other historically inaccurate 17th century Mars locales.

All of this is told through cutscenes in-between missions that pair text with scrolling paintings, filled with detail and a warmth that fully excuses their skimpy nature. Despite these self-imposed limitations, the cutscenes are brief and entertaining — more importantly, they are skippable. The story is silly but retains charm by playing its ridiculous concept straight. However, there is an unlockable “Farce” mode that replaces the original story with a pointless, lame one full of many winks and nods to the player. Perhaps, that’s the point. 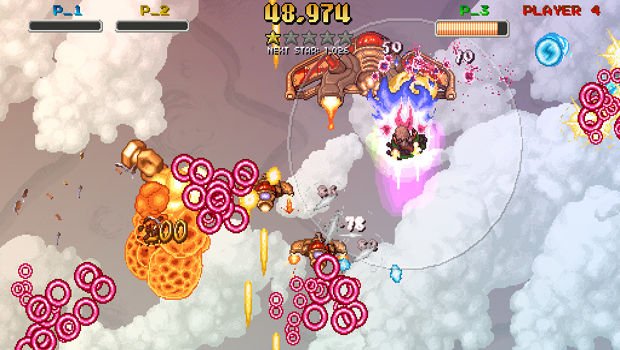 In addition to unlocking ships, higher difficulty levels and other bonuses, you also gain access to a series of 20 Challenges that will help you get accustomed to the game’s mechanics. Eventually, the Challenges increase in difficulty to the point where only the most hardened shmup veterans will survive — and, if they do, there is always Judgement difficulty, where enemies project suicide bullets that can’t be absorbed with Vaunt (similar to the green bullets in Deathsmiles).

For those who know their Cave and Touhou shooters, Jamestown may feel tame, slow and a bit misguided — the final stage draws the already slow scroll speed to a halt, as the player waits for doors to open in an Ikaruga-esque obstacle course of doom. Final Form hasn’t yet earned its place alongside the best of the genre, but I have hard time thinking of another shmup developer who has a debut as strong as Jamestown.

After two, arduous years of self-funded development, Jamestown has been polished into a modern Shmup classic with an aesthetic and style that’s all its own. Final Form’s dedication to fans and updates to the game, barely a month old, are encouraging even though the game hasn’t quite found an audience yet (if the leaderboards and 33 percent-off sale are anything to go by).

Online multiplayer and video replays are noticeably absent, and the game is optimized for an audience that doesn’t exist: Four Shmup-fanatics on a couch staring at a laptop. A refined single-player mode with smaller screen space would be a great improvement. The hardcore will continue to nitpick the details of the scoring system and some newbies will complain about the two credit limit, but no other Western developer is making games like Jamestown.

The beauty of Final Form’s debut is how many play styles it complements. Playing solo with the Beam ship, solo with the Gunner, or co-op with three friends makes for three completely different experiences with its own set of challenges. The slow-speed and simplistic scoring system paired with a distinct, amusing aesthetic make Jamestown a perfect first step into the shmup genre for a newbie and an interesting diversion for 1cc-ing elitists.