James Pond 2: Codename Robocod is one of the first games I ever remember playing. By most standards, James Pond was never a great series, but its charmingly unfunny humor and silly gameplay made it quite popular in Britain.

When I heard James Pond was coming back, I got quite excited, and I was really looking forward to checking out his mobile resurrection.

Then I played it. Now I feel sad. 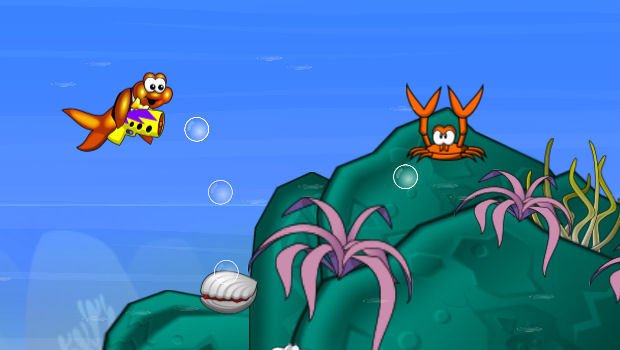 James Pond in the Deathly Shallows bears only visual ties to the James Pond games of old. While the original nineties titles were puzzle-platformers, this iOS iteration has more in common with Ecco the Dolphin, rightly recognized as one of the worst games the Genesis ever boasted.

Instead of platforming, the titular James Pond swims from left to right, and the player has to tap the screen to keep him afloat. The more one taps, the higher he climbs. He can also fly above water and swim backwards, but that requires an air supply which can be refilled by collecting scuba tanks or swimming through air bubbles.

Unfortunately, the game controls horribly, and James takes damage if he so much as glances a rock or piece of land. Deathly Shallows thinks it’s fun to navigate tight corridors with a character whose movements are difficult to predict due to the unwieldy tapping mechanic. He also takes damage if he touches the ground while on land, and if he runs out oxygen, he’ll stick to that land, grimacing uselessly while his health runs out. This happens all the time, and it’s the opposite of fun. 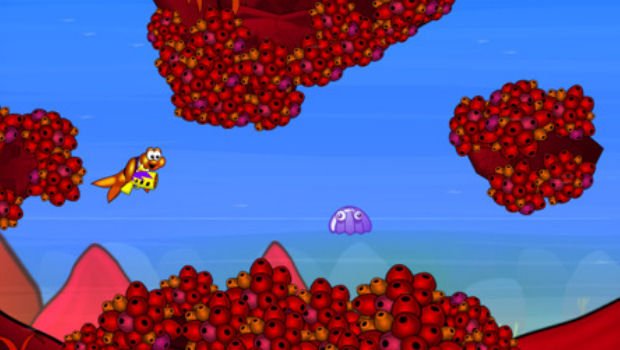 Pond automatically shoots at enemies, although his response times are random. Sometimes it’ll take several seconds for him to start shooting, other times he’ll do it instantly. Working out whether or not you’ll hit an enemy or take damage is a matter of simple guesswork, and it’s easier to just forget about enemies and hope for the best.

Deathly Shallows looks like a poor Flash game, but even if this was free on a browser, I’d feel robbed in some way. The visuals are cheerful but poorly animated, the music is repetitive and annoying, and above all, it’s incredibly short. Length is only padded out by how many cheap, pointless, random deaths you risk suffering. I’d be surprised if the entire game takes more than ten minutes to beat by lucky players who get through it unscathed.

Yes, it is only one dollar, but when so many other games provide immeasurably superior iOS experiences for a buck, I can’t help but feel cheated by the measly price. In an ideal world, HPN would pay people to download it.

It is clear that those behind the game know what a useless waste of time it is, and awkwardly glued the James Pond name to it on order to con fans. It’s fairly despicable, and I can’t warn fellow lovers of the series to stay as far away from this piece of trash as possible.

Sorry to dampen spirits, but this red herring is stuffed to the gills with soggy gameplay and should be condemned to sleep with the fishes.