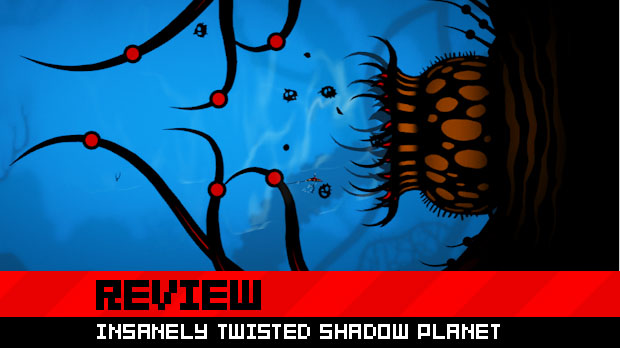 If games were rated on name value alone, then Insanely Twisted Shadow Planet could be a game of the year contender. It’s the kind of name guaranteed to get attention, and one that promises a unique, interesting, entertaining experience.

Unfortunately, the risk of having an awesome name is that you need to work extra hard to make sure it’s lived up to. Whether Insanely Twisted does that or not is up for debate. 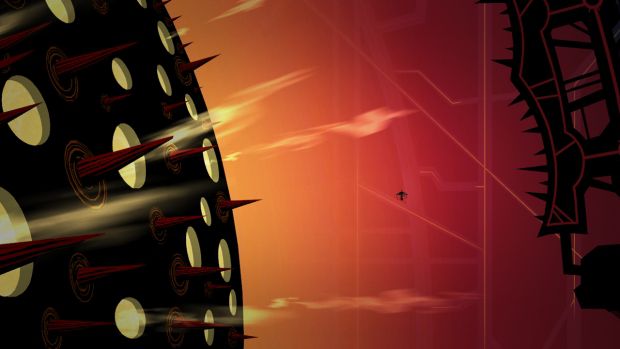 Insanely Twisted Shadow Planet is all about tackling a planet full of insanely twisted shadows as a plucky little UFO with controls that mimic a traditional arcade shooter. This shooter sensibility, however, is married to exploratory gameplay that has been quite rightly compared to the likes of Metroid and latter-day Castlevania. There is a single world map and players must gain access to new equipment in order to unlock new areas and explore the entire world.

Over the course of the game, Insanely Twisted‘s “B-movie” flavored spacecraft will uncover such power-ups as a grasping claw to grab at objects, a circular saw that can burrow tunnels through rubble, and a magnet that picks up otherwise inaccessible items. Just like with all “Metroidvania” games, there is a rewarding satisfaction in gaining a new item and backtracking to find previously unreachable areas. These areas usually contain extra upgrades, such as higher damage tolerance or a stronger projectile for the ship’s ray gun. Concept art and fragments of visual backstory scenes are also dotted around the game.

Insanely Twisted puts a significant focus on puzzle solving, as most areas inflict some sort of brainteaser on the player. Such puzzles include remotely controlling rockets through a maze in order to hit switches or using crystals to deflect laser beams into blocks of ice. The further the game goes, the more involved the puzzles get, although none of them are taxing enough to ever keep the moderately intelligent completely stumped. 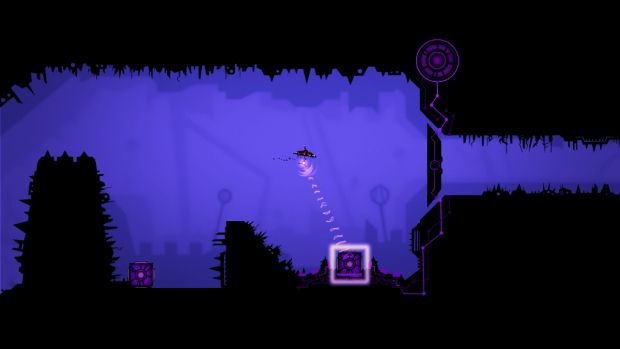 This preference for puzzling over combat is carried over into the game’s best moments — the boss battles. At the end of each map area, an oversized creature will make its appearance. These bosses are fought with logic rather than violence, and usually require the use of whatever new upgrade was found in the area. Again, these battles aren’t too challenging, but the logic required to beat them is often so clever that it can be forgiven.

For those with a desire to fight, there is most definitely some combat, although it is by far the weakest aspect of the gameplay. While a number of upgrades can be used in battle, the defacto weapon is a rather weak energy projectile that, even when upgraded, is so weak and unwieldy that it barely hits anything. This is made doubly irritating by the fact that the enemies are almost always erratic in their movements and like to come at the player with sudden bursts of movement. Due to an overabundance of health items and frequent spawn points, no battle is really difficult — but almost every one feels like an unwanted hassle due to the speed and unpredictability of enemies and the UFO’s inefficient arsenal of weaponry.

Insanely Twisted Shadow Planet has all the basics in place for a decent game — it’s got a neat exploratory aspect to it, the puzzles are simple but satisfying, and there are some really cool bosses. However, the game never goes beyond those basics and doesn’t seem to strive for anything above simple decency. Despite the Metroidvania comparisons, there isn’t much exploration as each area is quite linear and there are only a few opportunities to backtrack and find new secrets — opportunities which dwindle rapidly over the course of the game, as if the level designers just gave up. 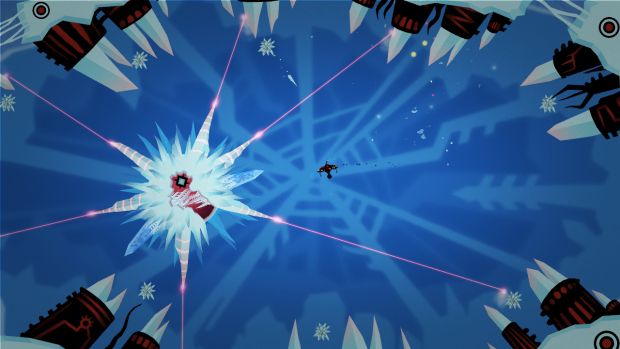 The main problem with the game is that it never goes far enough in any one direction to truly make an impression. It’s not deep enough to be a worthy Metroidvania, it’s not mentally taxing enough to be a puzzle game, and it’s not balanced or intense enough to be a shooter. It makes half-hearted attempts to spread in all three directions, and does nothing to excel in any one of them. It’s worth noting that the game is also very short, and can be easily completed in an afternoon with time to spare. It took me two moderate play sessions to complete the game with 95% of the map explored.

Despite the odd flashes of brilliant design, I can’t say I found anything truly compelling in the experience, due to the shallow nature of the experience and its languid pace. For a game that doesn’t last very long, a lot of time is wasted on the egregious backtracking and sluggish UFO movement, and in spite of the exploration aspect of the game, maps are designed in a rather straightforward, linear fashion, with shortcuts in limited supply.

So much of the game feels simply like one is going through the motions rather than getting engrossed in the gameplay. Its lack of complexity, poor pacing, and tedious map design leads to a game that is solid overall, but undeniably tepid throughout.

As well as the main game, there’s a little extra longevity in the “Lantern Run” mode. Up to four players have use the grabbing upgrade to race through a level as quickly as possible, while being chased by tentacles. It’s a decent little co-op mode, but nothing worth keeping players invested for too long. 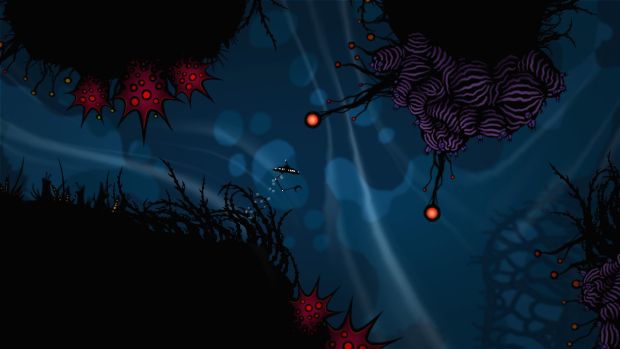 It has to be said that the game gets credit for a wonderful visual aesthetic, which presents much of its scenery and many opponents as silhouettes with splashes of strong, bold colors to keep things interesting. It’s an appealing style that sometimes threatens to make the game look more fascinating than it actually is. Each area of the map has its own distinct color scheme, with a bright background offsetting the dark shadows of the foreground. It shares many aesthetic traits with Patapon, and it makes for a visual treat on the big screen.

Sadly, great visuals do not a great game make. Nor does gameplay that spends most of its timing striving only for a passing grade. Insanely Twisted Shadow Planet scores points for its moments of genuine cleverness and tight, logical design, but the majority of the experience is a lukewarm and superficial one. It tries to merge three types of gameplay together, and while the intention is admirable, the effort made is far from total.

It would have been better for Insanely Twisted Shadow Planet to pick one specialty and go the distance, rather than attempt to run in multiple directions at once and make very little ground at all.