Apple Arcade made a big splash day one, and I couldn’t be happier. Tasked with killing a microtransaction/gacha-hungry monster it helped create, Apple is trying out the subscription model, and the best part is that every game is a premium release.

And if Apple can keep wooing developers like Hidden Layer Games to continue releasing projects like Inmost on it, it’ll be in good shape. 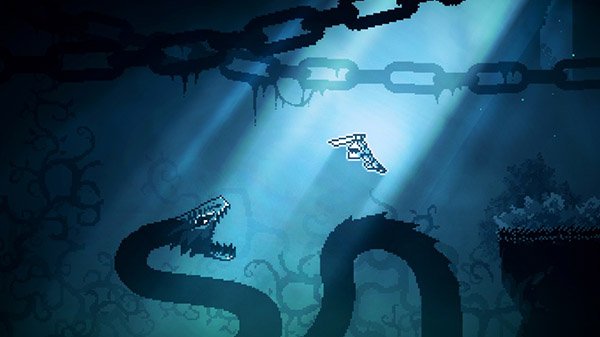 With an emotional warning screen at the start and the pixel-like visual style, you know this isn’t going to be some people’s game. And that’s okay! You have to have a certain degree of patience to really dig into what Inmost has to offer, in more ways than one.

There’s a sequence with an old man slowly walking down stairs as a voiceover plays. There’s bits where you have to control a little girl who can’t jump or get around very well without the help of boxes. It’s artsy. It’s metaphorical (even if the in-game fantasy universe can be explicit at times). It’s also not a walking simulator, so you can breathe a sigh of relief if you were super worried about that for some reason.

Two of the three “main” characters — beyond the aforementioned girl: a jumpy man and a knight with a grappling hook/sword — have platforming or action mechanics, respectively. Much of the marketing is (smartly) focused on the flashy knight, but the man’s portion curiously takes its cue from old point-and-click adventure games. While the girl and knight tales are mostly told in flashback form, the man is the glue that holds it all together as you explore a gradually unlocking world, acquire new RPG-like items, and handle tricky platforming portions.

Some sequences are harrowing and helpless, others are more action-oriented and recall some of my fondest memories of playing Another World for the first time: even if I was overthinking a few puzzles. There’s also 80 hidden objects to uncover, some of which are devilishly hidden (and stay on-screen after death, thankfully). There’s definitely a “game” here if that’s what you need, but you still need to go in with an open mind.

I’m sure that a lot of you won’t be impressed by the visual style just looking at it, but its beauty really opens up in motion, and so much more is conveyed than meets the eye — even color — with its muted hues. Just be warned: the checkpoints are really finicky (make sure you finish full scenes before you quit, or hope the game doesn’t crash, or you might have to start all over), and it can sometimes be unclear what triggers the next scene, but those are faults you can work with.

I’m trying to be a bit vague here when it comes to Inmost‘s narrative details to avoid spoilers, but don’t cancel that Apple Arcade subscription just yet. It’s worth a playthrough as you wait for the next thing to come along, but you’d be hard pressed to exhaust all of the great games on the Arcade even if you tried.