Injustice: Gods Among Us is finally here home consoles, and if you haven’t had a chance to experience it yet, there is an iOS version available for free.

To be clear, this is not a full fighting game experience in the slightest. But, if you don’t mind tapping a lot, beating up a bunch of dudes on the go can be pretty fun. While Injustice iOS technically is a fighting game, it features auto-movement that essentially makes it a Rock ‘Em Sock ‘Em Robots simulator — oh, and it has card elements.

Wait, where are you going? It’s not that bad! 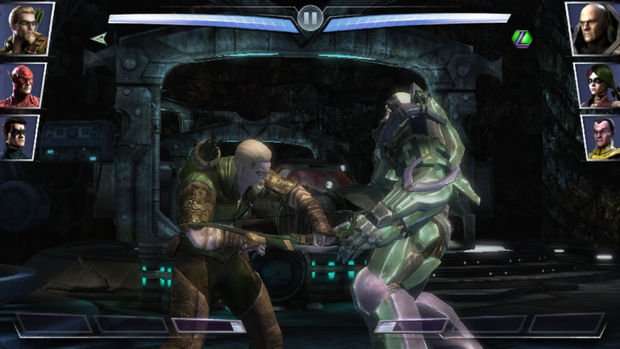 In an odd twist of fate, Injustice on iOS bears some similarities to Marvel Vs. Capcom 3, in that it pits heroes and villains together in 3v3 combat. As such, you’ll unlock three heroes at the very beginning (in the form of playing cards), with the ability to earn, or purchase more as the game progresses. The awful “energy” mechanic that limits plays is found here, but thankfully, each individual character has a different energy rating, so you don’t necessarily have to stop playing or pay for energy all the time like other games.

Gods Among Us iOS is mostly a button mashing affair, tasking you with tapping for basic combos, swiping for heavy hits, and completing various maneuvers to power up your super abilities (like tapping when a line hits a moving line hits a certain point on the screen, or rapidly swiping a certain direction).

Each character has a unique set of moves, stats, and supers, which makes experimentation extremely fun. Blocking is accomplished by holding down two fingers on the screen, movement is handled automatically, and honestly, that’s about it. As you can imagine, Injustice iOS isn’t the deepest game on the App Store, but it gets the job done. 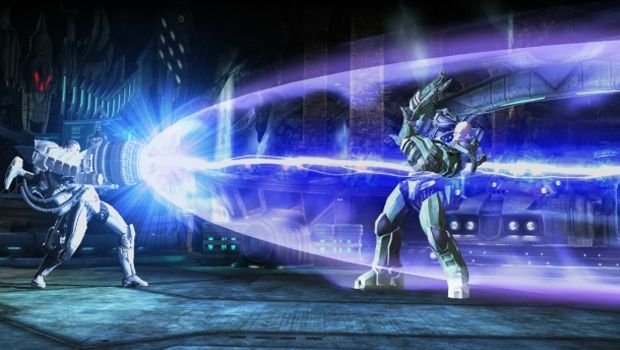 There’s an addictive quality to this game because of how mindless it is. Keep tapping, swipe occasionally, ignite your super, repeat. As unfun as it sounds, watching DC’s heroes and villains beat the crap out of each other with a decent visual quality has a certain allure to it. As you progress, you’ll fight your way through certain arenas against other teams, and occasionally, you’ll fight a boss character, leveling up your cards along the way.

As fun as it is, the game could use a lot of work though from a design standpoint, as most menu options are really sloppy, with run-on text that blends into buttons, and buttons that don’t respond to touch. The UI doesn’t have nearly enough polish, and it’s kind of a surprise given how well the actual game works.

By completing certain parameters and linking your WB account, you’ll unlock certain skins and icons on the console version, which is pretty neat since it gives you an opportunity to play in the same universe on the go and actually earn something. Likewise, completing certain objectives on the console version will grant you rewards in the iOS game, which is also a neat idea. Sadly, Wii U support is not in the cards, so you’ll have to stick to the 360 and PS3 for this feature. 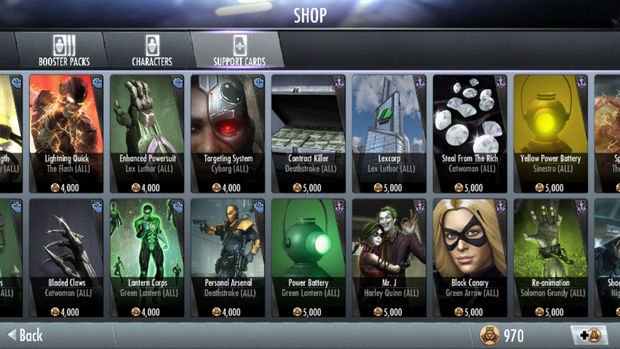 Injustice only uses one non-confusing currency, which you can use to buy characters, support abilities, and booster packs — all of which take the form of cards. At first, the in-app-purchases don’t feel necessary even if they’re egregiously high — I’m talking “$20 for Batman” high. Most of the “lower tier” DC characters are really cheap or easy to get, but if you want the cream of the crop, like Superman or Joker, you’ll be waiting a bit or paying out.

But really, as crazy as some of the prices are, they’ve made things incredibly simple and non-deceptive here, because you know exactly what you’re getting into at a glance. The inability to trade cards hurts progression, but if save up and get silver or gold levels, you shouldn’t have too much trouble if you can stomach the grind.

Eventually after reaching higher levels, you will most likely reach a paywall or be forced to grind. Some of the fights get insanely tough, to the point where you’ll realize your cards are obviously not strong enough or high enough level. Also, if the tapping doesn’t grate on you after a while, the similarity of each battle will, and the complete lack of a story or context will most likely take you out of the world and force you to experience it in short bursts.

As mindless as it is, Injustice iOS is a very easy way to get reacquainted with your favorite DC Comics characters. It would have been a much better experience as a straight $4.99 download, with the ability to unlock every character in the game through straight progress, but despite that wasted opportunity, you really can’t go wrong with at least trying out this free game.