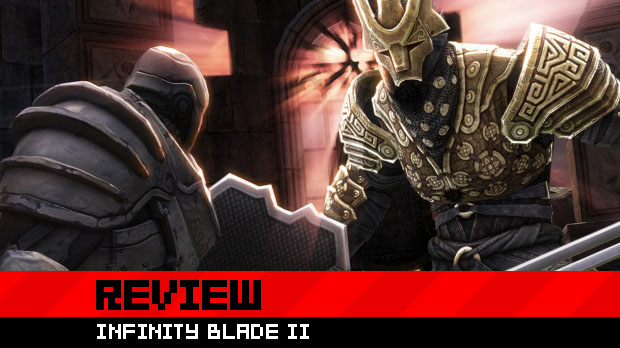 When our future selves look back on the time mobile gaming truly earned its place in this industry, there is no doubt that Infinity Blade will be seen as the first major turning point. Its critical acclaim and commercial success, not to mention the quality of graphics and engaging gameplay, stood as the moment where more than just Angry Birds fans took notice of iOS as a legitimate gaming platform.

Few games have really attempted to seize the momentum and continue what Infinity Blade started, so it seems only fitting that ChAIR returns a year later to remind us exactly how ambitious and downright enthralling a mobile title can be. This is Infinity Blade II — bigger, deeper, and more ready than ever to prove that gaming on your phone isn’t just for your mother. 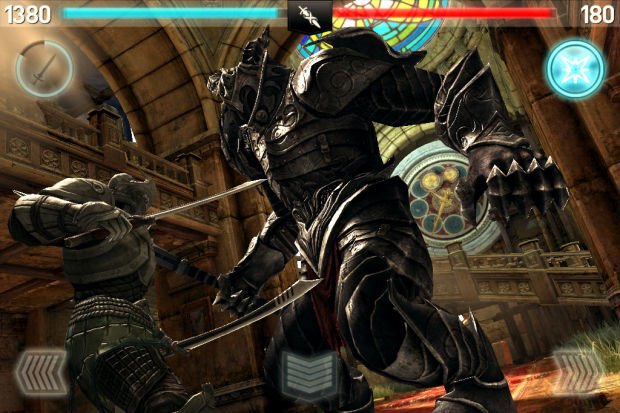 The first Infinity Blade had a story that was merely hinted at, shrouded in mystery and vague allusions. This time, there is a lot more meat to the plot, but despite fully voiced cutscenes and a cast of actual characters, much is still left to the player’s imagination. Infinity Blade II picks up where the first game left off, with the God King defeated and the hero in possession of his titular sword. To go literally any further than that would be to spoil things, but rest assured that things get very shadowy, very quickly.

Cutscenes are now voiced in English, rather than the invented language of ChAIR’s fantasy/sci-fi universe. In some ways, this leads to a disappointing loss of mystery, as familiar voices lead to a less exotic and alien world. Nevertheless, the acting is impressively strong, and one particular character (who shall remain nameless) is performed with such delicious pompousness that it makes up for any letdown that might be felt. In any case, there’s still plenty of oddness to go around, fake languages or not.

ChAIR has evolved the gameplay to provide a very recognizable base, but expanded in every single way. Infinity Blade II presents another series of one-on-one duels against increasingly challenging monsters, with players blocking, parrying and dodging until breaking the enemy and fighting back with elegant touch-based swipes. This time around, however, the minions of the Deathless have taken off their gloves and put up some real resistance, with punishing new attacks and varied patterns that make them far harder to predict.

The player’s defense tactics have been given a bit more balance to ensure that players that safe, familiar routines cannot be depended on. If players dodge too much, the hero can become exhausted and grow far less effective. Opponents will also frequently attack with fists and shields so parrying is no longer completely trustworthy, and many attacks can also break through shields to stop anybody planning to “turtle” their way to victory. The penalty for sticking to one tactic is ever-present, and an impressive job has been done of ensuring that each battle feels less formulaic and more dynamic. Tougher creatures are not afraid to feint at times, perhaps raising a sword and tricking the player into parrying, only to surprise with a sneaky boot to the face. These moments test the player’s ability to break free of instinct and muscle memory, yet again keeping would-be heroes on their toes.

The more intense combat is appreciated, but it doesn’t come without its share of fresh grievances. For one, the difficulty spikes can become quite a surprise once the first “real” boss has been defeated, and the need to grind increases exponentially as a result. Enemies do far greater damage than usual, even with decent armor, and it’s not long before they get access to powerful elemental weapons that sap one’s life swiftly. Not to mention, the shield becomes practically useless in the latter stages of the game, as almost every single enemy will attack through it and do major damage. This wouldn’t be problem if it didn’t happen so quickly, encouraging players early on to start a whole new game while retaining their character progress, just so they can be strong enough the second time around.

Fortunately, players do still keep all their equipment, levels, and boosted skills upon death, respawning into a new “Bloodline” to begin each quest anew. After all, nobody is expected to beat Infinity Blade‘s bosses on the first encounter, with a potentially infinite cycle of death keeping players going until they’re strong enough to conquer the latest challenge. Instead of simply going through a palace and defeating the God King, players must this time go through a castle with multiple paths, taking down over four major Deathless before rescuing a “man” known as the Worker of Secrets. As it was with everybody’s favorite God King, the defeat of any one of these Deathless is accompanied by a sense of jubilant satisfaction and a feeling of accomplishment, especially if it’s one that’s put you in the ground several times running. 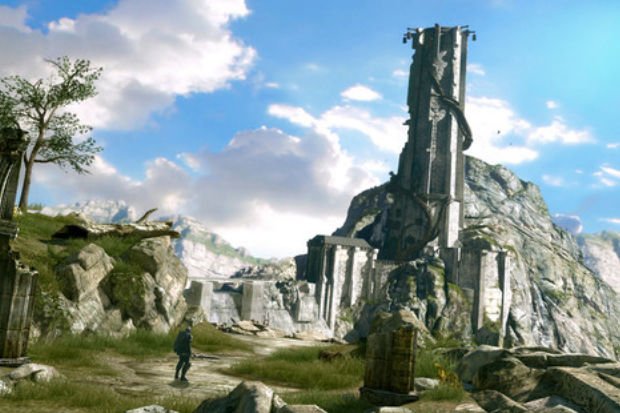 Outside of combat, there is now a ridiculous amount of new equipment to find, alongside old favorites like the Holiday Helm and Ladyfinger. As before, each piece of equipment collects experience points which are drained into the player characters’ XP pool, allowing him to level up until the equipped item is “Mastered” and can gather no more. The balance between collecting powerful gear while collecting experience points remains, and with so much more stuff to grab, dedicated gamers will take a damn long time before having a hero at maximum capacity.

Weapons are now split into three types, with the familiar sword and shield being joined by dual blades and heavy weapons. Dual blades attack more swiftly, allowing for greater combos, and allow the player to duck incoming attacks rather than block them. Heavy weapons include axes and maces, and deal huge amounts of damage. Players won’t be able to dodge with heavy weaponry, but can block attacks in multiple directions to better stagger the opponent. Gear now comes with various shaped slots that can be fitted with gems, because we need even more loot to gather. Gems possess extra perks, such as improved item drops, elemental damage, or greater defense bonuses, and can fit into any slot of the corresponding shape. They can also be removed from discarded weapons at the cost of gold.

The inventory has been given a slight overhaul, with items now split into better category menus for easier browsing. More powerful items are bought with in-game gold, which can be purchased for real-world money or earned honestly throughout the course of battle. New “supply” items, such as health regen potions and prize wheels, provide a little more aid and can — if bought for a very high price — make the boss fights far less difficult. As if that wasn’t enough, there are new locked chests that can be opened by finding keys in the game world. It’s a small addition, but the fact it was tossed in just to make things interesting speaks volumes about how serious ChAIR took this sequel. 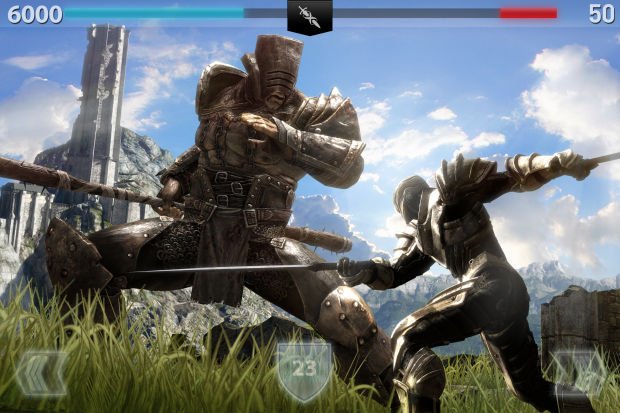 At first glance, those unfamiliar with the game will think Infinity Blade II is more of the same, but the sheer level of improvements made to every facet of the game is quite staggering. ChAIR could have likely released little more than a glorified Infinity Blade with a few cosmetic changes and gotten away with it, but Infinity Blade II has expanded and deepened to a laudable degree. Battles are tougher, exploration feels less linear, and new items to discover make a game that feels much more like a role-playing adventure then ever before. Few console sequels could claim such consistent and thorough improvement, let alone an iOS one.

Of course, no Infinity Blade II review could be complete without a mention of the graphics, which are more gorgeous than ever. When not played on an iPhone 4-S, it has to be said that the animation can get a little choppy, but rarely does it take away from just how beautiful everything looks. The only time the framerate truly aggravates is when the obnoxious Game Center pop-up welcomes you back to the game in the middle of a fight and completely throws the timing off, otherwise I had few issues on a humble iPod Touch 3G.

Infinity Blade‘s delightfully bleak artistic style has returned in full force, with a series of wonderfully decrepit environments and a selection of monsters that range from intimidating to utterly bizarre. Weapons and armor are a sight to behold as well, coming in a variety of weird and often ridiculous fashions. It takes a real man to roll up to an immortal demi-god wearing only a metal Santa mask and a loincloth, but players can do it if they so desire. 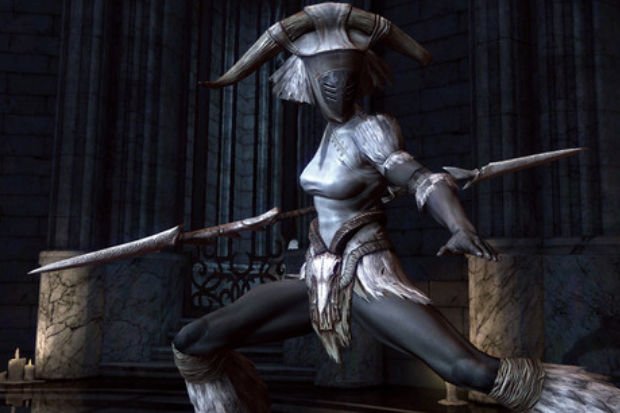 Gamers who were not sold on the original’s “Punch Out!!! with swords” gameplay will likely remain unimpressed with Infinity Blade II, but fans are sure to be completely thrilled by the amount of upgrades and improvements on offer, not to mention the developments of its increasingly enigmatic story. The sudden upshot in difficulty can take one by surprise, but the flexibility allowed when restarting Bloodlines means that it’s never a real issue. Otherwise, this is the same kind of great combat found in last year’s title, but with absolutely everything ramped up to magnificent degrees.

If Infinity Blade was proof that mobile games could be taken seriously, then Infinity Blade II is that very same proof biting any and all detractors on the genitals.