In 2009, Sucker Punch answered a few questions I had been asking myself for years. What would happen if Sly Cooper had a messenger bag and a Misfits of Science-like ability to channel lightning through his hands? What if Bentley was an unsuccessful womanizer with a pompadour? Would the design sensibilities of a series so revered properly translate into an open-world action game?

Those answers came in the form of the original inFAMOUS, and despite both deserved and undeserved criticism the game performed well. As a super-hero origin story that was clearly conceived as the beginning of a new franchise, it delivered on many fronts while leaving a number of new questions in my mind. For example, would a sequel really make the player feel as if Cole McGrath had grown in power and depth?

Thankfully, for Cole and for us, the answer is yes. 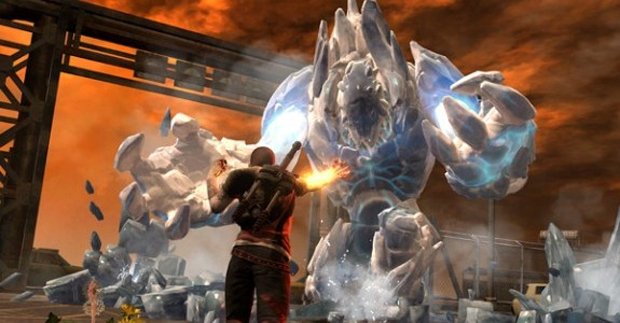 inFAMOUS 2 is the continuation of the story of bike courier and urban exploration enthusiast Cole McGrath. In the original, Cole unwittingly carries a device known as the Ray Sphere into the heart of Empire City, where it promptly explodes and kills thousands. The radiation turns many of the city’s denizens into mutants and thugs while leaving Cole with power over electricity. As a result of the blast and its aftermath, the city is quarantined, and Cole is forced to master his new found capacities in order to restore order to the city.

It turns out that the entire Empire City event was an orchestrated disaster, designed specifically to give Cole his powers and to prepare him to face an even greater threat to come: a super-powerful Conduit known as The Beast. The overarching plot of inFAMOUS 2 is archetypal comic book fare. Cole faces The Beast, The Beast kicks the crap out of Cole, and Cole flees to find a way to amplify his power and stop The Beast. Cole and his sidekick Zeke take a boat-ride to New Marais, where a scientist holds the key to taking down the big bad.

While inFAMOUS 2 does briefly recap the events of its predecessor, the game by and large expects that you are familiar with the first game’s plot and characters. The transition to New Marais happens very early, and before long Cole is faced with a whole new cast of villains and allies.

For those familiar with the first game, you’ll notice right away that McGrath is voiced by a new actor. Gone is the 2-pack-a-day-smoker gravel, making the voice much more believable and age appropriate for an athletic young bike courier. That being said, the true strength of inFAMOUS 2‘s story comes not from Cole but from the development of his supporting cast. 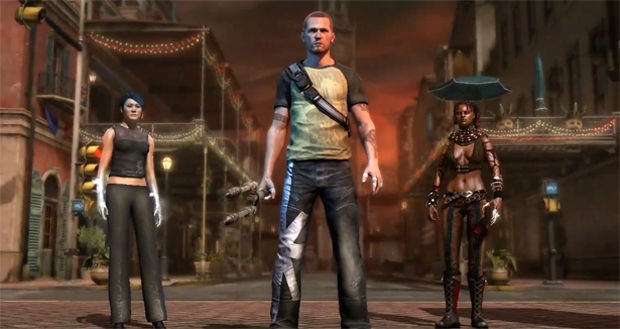 Rockabilly slacker Zeke makes his return, and while he still fills the main comic relief role, he is much more humanized and well-rounded. Joining the fold are two female leads that act as the devil and angel on Cole’s shoulders. Kuo is the agent who finds Cole in Empire City and brings him to New Marais to recover and fight The Beast, and she represents his better nature. Nix is a New Marais local who is also a Conduit and is known by the locals as the “swamp witch”. Her tortured past leads her to seek revenge at all costs, and her Chaotic Neutral leanings lead her to push Cole down a darker path.

Despite representing the moral polarities the original was known for, both Nix and Kuo have a surprising amount of complexity to them and both make grey choices throughout the game. This gives a welcome context for the oft mocked “adopt the kittens or drown the kittens” mechanics of the karma system, making it much more palatable.

Aligning with one or the other will allow Cole access to a different set of Conduit abilities providing either ice of fire powers that both blend nicely with McGrath’s bolts-o-plenty. Which leads us to the central question crucial to the enjoyment of any superhero title — how are the powers, man?

One of the greatest strengths of the first game was the fun of getting around the city, which is no surprise given the tradition of traversal that Sucker Punch brings to the table. Once Cole gained the ability to grind on power lines and fire static thrusters to prolong his jumps, the original inFAMOUS took on a Crackdown level of fun in travelling from rooftop to rooftop. The beauty of the sequel is that it doesn’t make you wait to experience the joy of traversal again. 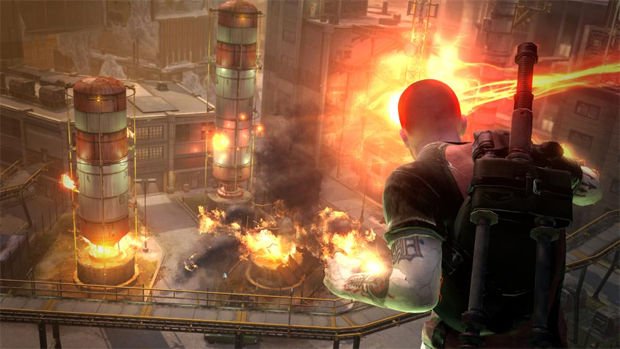 Rather than force you to jump through the classic Metroid sequel hoops of losing all your toys and then slowly regaining them, inFAMOUS 2 starts you off with a respectable stable of abilities and periodically adds to them. By the end of the game, all of your standard powers will have multiple variations that each have different and useful applications.

Players will likely find configurations that they like better than others, but diversity in enemy types encourages experimentation. Thankfully, Sucker Punch included an intuitive and effective user interface for managing them all. Holding to the left on the D-pad pauses the action and displays a list of buttons and the power types currently assigned to each.

Want to change from a bolt that does massive damage but has a slow rate of fire to a homing bolt that tracks the enemy? Just press the button you’ve been using for the bolt all along to cycle through your bolt powers, and then release the D-pad to immediately unpause and jump back into the fight. The same applies for rockets, grenades, pulse, and special powers. It’s an elegant system that minimizes menu time and is simple to navigate.

Those hoping for a total revamp of combat in inFAMOUS 2 will not have their prayers answered. Combat is still a tactical affair, favoring those who know when to retreat from ground level and attack from the relative safety of the rooftops. Just as with the first, players will likely either love or hate the cunning that some fights will require. I find it a refreshing change of pace to the shooting in many games.

Another constant is the fact that Cole doesn’t have much health and can die easily if exposed to a group of thugs. However, an abundance of power sources does give players who want to stand and fight a better chance to heal when things go south. 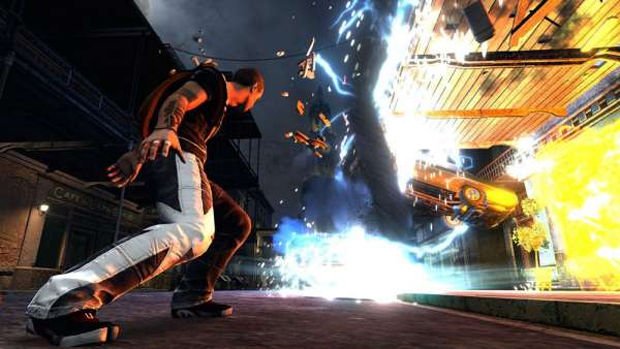 That being said, combat does see a number of very welcome improvements over the original. Enemy accuracy is no longer at the RoboCop tier, meaning staying on the move and dodge-rolling will actually result in some misses from the AI. Another complaint addressed from the first was the enemy’s penchant for spotting you from 3 blocks away even if you were out of line of sight. In many cases, it is now possible to catch bad guys unawares, and you’ll even get an XP bonus for drawing first blood when their pants are down.

Melee was frustrating and useless in the original due to the unholy dodging ability of the bad guys combined with a camera that just wasn’t tuned to allow you to keep enemies in-frame at that distance. I’m happy to say this is no longer the case. While the enemies do stay on the move, Cole’s new melee weapon, the Amp, allows him to strike from a little further out, mitigating both enemy movement and camera concerns. With some basic combos and finishers, getting up close and personal is not only viable but is in many situations ideal. 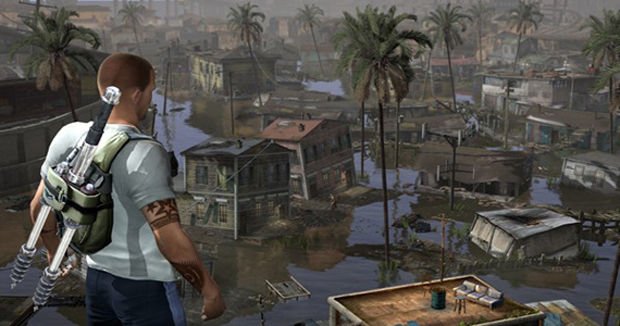 The city also comes with its own home-grown baddies in the form of The Militia. There to defend pure-blood humans from the “freaks” with powers, they use and abuse their power willfully. A grating Southern racist flavor to these enemies make them particularly satisfying to tear into. Their leader, Bertrand, is a manipulative Louisiana businessman who spurs them on for his own ends; he struck me as a mutant super-villain version of Tommy Lee Jones’ character from JFK.

New Marais was also designed with diversity of gameplay in mind. The initial section will feel much like Empire City, but as the map opens up you’ll find welcome changes that make the game feel fresh and force you to play in new ways. Flood Town elicits the devastation of Katrina, and I found it difficult to pass up healing the downtrodden denizens there. Sunken houses and makeshift buildings make traveling dangerous with the amount of water all around, and a skilled use of thrusters is needed to progress safely. A lack of cover in this exposed area adds a challenging dimension to the combat and forces you to keep on the move.

Side quests remain a major component of the game, vital to reclaiming areas of the city that will reduce enemy numbers and make the story missions easier to complete. In order to max out your powers, they will provide the essential XP. They do suffer from some of the repetition present in the first game, but there is more variation in general. A high-point included a mission where 25 enemies had infiltrated a crowd dressed as street performers, and you are tasked with taking them out. As a man with a deep rooted hatred of both bigotry and mimes, unleashing Hell on them guilt-free was a delicious two-fer.

inFAMOUS 2 also treads into new territory with its UGC, or User Generated Content. The game comes with a massively robust content editor, allowing for a wide spectrum of missions to be developed. The barrier of entry for learning the tools is high, however, and I suspect it will be some time before very strong player-made content bubbles to the surface. 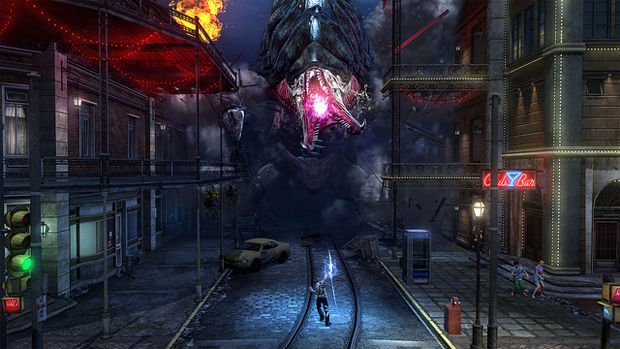 While being impressed with the potential, the handful of missions I jumped into were mostly shallow, lukewarm affairs. Rating tools and Sucker Punch curation will likely improve the quality on offer given time, and I look forward to a new playthrough later to see what the community has wrought once they’ve had some time to learn the trade. The welcome absence of any Mario or Sonic missions gives me hope.

While I enjoyed my entire playthrough, there’s no denying that inFAMOUS 2 does repeat some of the sins of the original. The climbing is as sticky as ever, and there will be occasional frustration when Cole grabs onto the wrong surface at inopportune moments. A lightning tether that can pull you directly up to the tops of buildings like Spider-Man’s web slinger does help with this later in the game.

Boss fights are more impressive from a spectacle and set-piece perspective, yet still devolve largely into shoot-the-weak-point engagements. The contentious moral choice system remains largely untouched, but does have a greater impact on the outcome of the game. Completely different endings and sets of powers do make it more attractive to jump into a second playthrough.

Complaints aside, inFAMOUS 2 makes huge strides in almost every facet of development. Story and character, combat, environment, enemy AI, the powers, and visual polish all receive an upgrade in this iteration. Sucker Punch is to be commended for remaining true to the strengths of the original while giving Cole a real sense of progression through the core gameplay. While stopping just shy of being truly jaw-dropping, I was well entertained, and I am pleased to declare that this game is a worthy evolution for the franchise.