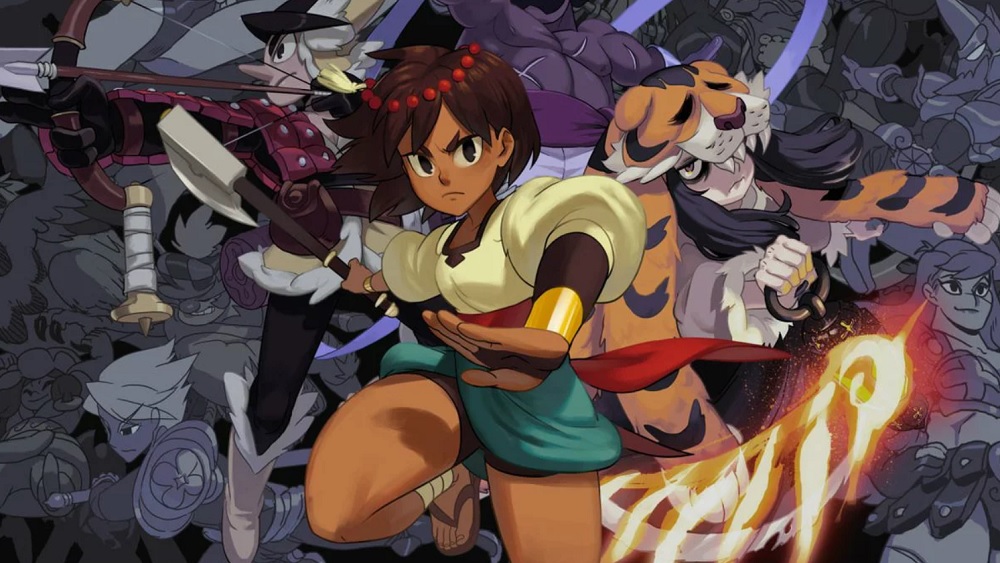 If the kids are united…

I love both Skullgirls and Lab Zero Games. And those of you who follow my scribblings on this here website know that I’ve been pushing Indivisible for some time. Hell, it’s been my “most anticipated game” two years running. I have faith in the passion, dedication and talent of the studio and, like so many fans, I’m eager to see what happens when this team applies the colourful character design, creative world-building and technical talents to a new genre.

But enough yakking, as we’ve all waited long enough. So let’s get to opening our minds. Literally.

Ajna is a headstrong young girl who lives in the remote village of Ashwat, where she trains to be a mighty fighter while enjoying the simple life. One morning, that simple life comes crashing down in the worst way, after her village is besieged by an imperial army. Facing down the captain of the guard — an arrogant young man named Dhar — Ajna, in the heat of battle, “absorbs” her attacker into a realm located within her own mind. Funnily enough, this comes as a shock to both characters. But still determined to shakedown the mastermind behind this attack, Ajna tightens her belt and — with Dhar now literally living inside her head — sets off on a world of adventure.

So begins Indivisible, an epic tale of bravery, friendship, and self-discovery, which blends faithful anime tropes with southeast Asian mythology, high drama, and a very sharp sense of humour. Our girl Ajna journeys far and wide through the lands of Loka, gathering a multitude of new friends, all of whom make home inside her noodle. Some of these characters wish to aid her, some have their own scores to settle, and some, well, just had nothing better to do that morning. These “Incarnations” are Ajna’s party members, and can be equipped at any time to join her on the battlefield against the various beasts who would do her harm.

Character is at the heart of Indivisible‘s story — and what character — Lab Zero has created a world populated with an immediately likable roster of heroes and villains. From brainbox botanist Ginseng & Honey and water empath Thorani, to stoic shield-maiden Qadira and (perhaps my favourite) apathetic witch Razmi, every single one of Ajna’s hitch-hikers is beautifully designed, superbly performed and utterly magnetic. Anchoring this party (which can grow to over 20 distinct members) is the beating heart of Indivisible: Ajna, a wonderfully written, openly-flawed protagonist. Ajna’s bloody-mindedness results in strong internal conflict, leading the young warrior on a path of self-realisation, bearing responsibility for matters far outweighing her own desire for revenge.

Trust the team behind Skullgirls to create another universe from scratch and immediately populate it with such brilliant, funny, and beautiful characters. Indivisible‘s ace is its personality-driven story and, although the narrative takes turns in the third act that feel somewhat sudden, the narrative concludes beautifully, leaving me with a fluttering chest and a severe case of the blubbers.

This personality is embodied in Indivisible‘s exquisite hand-drawn sprites, animated with fluidity and bursting with life. Equally as attractive are the lands of Loka, slathered in evocative colours and using layers of parallax scrolling to add depth to the 2D vistas. These visuals are backed by a great soundtrack from Secret of Mana alumni Hiroki Kikuta, composing tunes that fill the player with the spirit of adventure while simultaneously tugging on the ol’ heartstrings. The story is portrayed in attractive scenes of splash art, with smart and witty dialogue delivered by a cast of recognisable actors. Indivisible‘s aesthetic remains utterly charming throughout.

Gameplay is comprised of two elements: platform adventure and turn-based battles. The former involves guiding Ajna through various labyrinthine dungeons while unlocking abilities that allow her to acrobatically cavort to out-of-reach areas; a task she performs well thanks to an intuitive control design, which makes guiding Ajna a pleasure. Unfortunately, actual exploration is quite thin on the ground, and while on first appearance the action is very reminiscent of titles such as Hollow Knight, it never reaches the same level of intrigue in regards to secrets and surprises expected from games of this genre. There is an ever-present sense of both emptiness and loneliness to most of the dungeons.

There are some nooks and crannies to be found — housing gems that can be traded to build Ajna’s defense and attack capabilities — but, despite its Metroid-like maps, Indivisible is relatively linear in its path-finding, and mostly consists of standard platform negotiation for the majority of its playtime. This comes to a fault during two sequences — both involving the climbing of Mt. Sumeru — which outstay their welcome, hurting the pace of these climactic scenes.

More impressive is Indivisible‘s intuitive combat system, which will be immediately recognisable to fans of PS1 classic Valkyrie Profile. Ajna and any three of her friends engage in semi-turn-based battles built around user-created combos. Each face button is assigned to a character, with the goal being to perform the most optimal damage combo possible by weaving together your party’s bespoke attacks. For example, you might have Razmi juggle an enemy into the air, then have Dhar perform two leaping strikes. Then, as the enemy falls, time Ajna to uppercut them back into the air, before having Dhar spend his last ability point on an “Iddhi” (or super) attack. Developing these combos is the key to mastering Indivisible‘s combat.

Where things get really deep, however, is when you take into account the wealth of characters available, all with their own unique strikes, passive skills, juggles, armour-breakers, healing powers, etc. Considering the number of possible team combinations on offer, dedicated players can spend hours in the game’s dojo (which unlocks over the course of the story) finding their favourite lineups and experimenting with their destructive capabilities.

That’s the theory, at least. Unfortunately, a little over halfway into the game, I suddenly found my team had — by natural design — become unstoppable. Without exaggeration, I spent the latter half of the adventure crushing every single enemy I faced, literally defeating some boss characters in seconds. By the final act, Ajna’s attack power was only at the third tier of a possible five, but her posse was annihilating everybody, making the cool combat mechanics redundant. I hope this balance can be tweaked because after a strong start, the difficulty for the remainder of the game was legitimately broken in my favour.

While on that sore subject, Indivisible suffers from several technical issues. In busy areas, the PS4 frame-rate takes a dive. Populated cities such as Tai Krung are the worst offenders, though most areas that feature a lot of characters or effects can cause some level of stuttering. There are many minor elements in Indivisible that feel clunky, such as the jarring “screen-flash” reset should Ajna be killed, a lack of sound effects during cinematics, and a map that’s missing important landmarks such as Chakra Gates (essentially the entrance/exit). There is a volume balancing issue with some dialogue, and the final areas (the toughest platform sections in the game), suffer from tech problems that make the pixel-perfect journey toward the final fight a frustrating affair.

These problems all constantly chip away at the excellence on display elsewhere. Some of the blemishes aren’t too intrusive, but the frame-rate drops and the super-easy A.I. are examples that harm the overall experience. There is reason to stay positive, as some of these are fixable issues. Lab Zero was fully-committed to Skullgirls post-release — working to tweak every element of that title to perfection. So hopefully the same love will be shown here. I can’t currently speak for the experience on other platforms, for better or worse.

Once you have completed Indivisible‘s story — which took me just shy of 19 hours with the painless combat — there is little else on offer. The game is sadly missing a gallery, and continuing your save file appears to simply restart the adventure from scratch. To buy into Indivisible, however, is to buy into its core story, filled with adventure, drama, laughs, and some of the most appealing new heroes to come down the RPG pipe in some time.

The long road to Indivisible‘s release has not resulted in the masterpiece many, including this guy, might’ve hoped for. But regardless, the elements that are good are excellent. What stands out most is Lab Zero’s clear passion for their new universe, destined to be immediately welcomed into fans’ hearts. Despite its frustrating technical and budgetary shortcomings, I personally fell hopelessly in love with Indivisible. It would be heartbreaking if we don’t return to this franchise in the future. With all these varied characters and locations, there is so much exciting potential to be explored.

Indivisible is rich with character, personality, and passion. But it is hindered by technical problems, vacant maps, and pacing issues, which hold back its true potential. With a little tweaking, some of this could be reversed, allowing Lab Zero’s delightful cast, deep combat, and dramatic storyline to shine through. The blemishes can be hard to ignore but Indivisible, like Ajna’s new-found friends, still gets inside your head.