This review will be pretty simple if you fit a certain niche criteria. Did you enjoy past Paradox grand strategy games? Do you enjoy ancient history? Is the only thing holding you back from becoming a dictator a lack of power?

If you answered yes to at least two of the three questions then go ahead and buy it as it is a definitive Paradox grand strategy set in the ancient era. Those who don’t have a love of the time period though might be a tad overwhelmed by the scope of the world that awaits them in Imperator: Rome, but will still walk away happy. 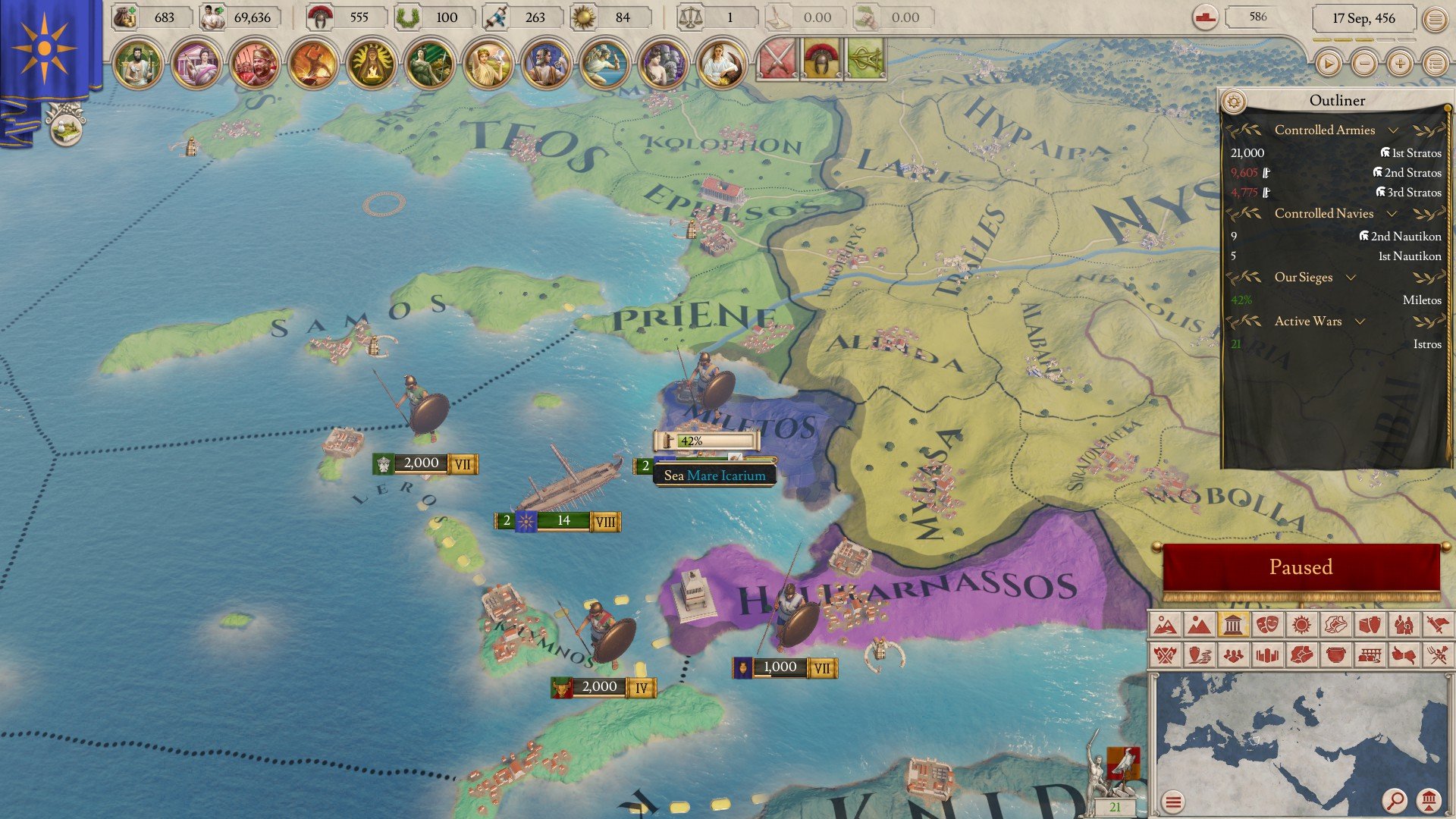 If you’ve played a Paradox Grand Strategy before then you have a good idea of how things are going to work in Imperator: Rome. You assume the role of a nation that existed around 304 BCE and have complete control over their economy, military, government, foreign diplomacy, and to an extent their religion. Accumulate power based on what types of actions you perform and what type of government you run, spend it on actions: then the cycle continues until you either quit the game or weep like Alexander for the lack of new worlds to conquer.

As with every Paradox Grand Strategy, there are no static game-ending victory conditions in Imperator: Rome. You decide what you want to do, and are given the means to do it. There are still specific objectives that you can attempt to achieve if you play as one of the bigger nations but they won’t end the game. For example: as Macedon you can strive to reunite Alexander’s fallen empire, or as Rome you can enable a dictatorship through manipulation of the Senate and populace. As far as newer players go, Imperator has what I would say is the best Paradox tutorial to date. Yes it’s still only skin deep and you’ll be far from an expert when you’re done, but it was nice to see a well thought out tutorial that went over the basics of playing a Paradox grand strategy instead of throwing you into the fray and forcing you to resort to YouTube tutorials.

While you can play as even the smallest nation that existed at the time, there is a lot more attention to detail put into a select few nations from the time period and as such you are steered in the direction of those nations for a better experience. The featured nations are Rome, Egypt, Carthage, Macedon, the Seleucid Empire, and Phrygia.  While there are a massive amount of other nations to choose from, I found playing as the smaller ones less encouraging as there was little in the way of objectives. Admittedly though, I’m not the biggest fan of ancient history, so those of you with a predilection for that time period might get more mileage out of playing as a smaller nation than I did.

That being said, the map is incredibly detailed and the fact that I can choose to play as one of the numerous nomadic tribes in pre-conquest Europe is really neat to see. I fully assume that down the line we will see smaller nations get embellished at least a little bit, given Paradox’s habit of supporting games post-launch with DLC.

I’m a gigantic loser so the government and diplomacy mechanics was where I had the most fun with Imperator: Rome. As the head of government, you can select what type of international stance you will take and that affects how much your actions will cost and how other nations will see you. For a brief example, Rome starts out in a bellicose stance which means that they are consistently working towards expanding their territory and anything they do politically in support of that is cheaper. Contrast that with the economic stance that I pivoted Macedon to at the start of my game. I did this so I could gain an extra trade route and accumulate more wealth in preparation for a long war of conquest while having to pay more than I could have for aggressive war actions. You can also take a neutral, or apologetic stance depending on what you want to accomplish.

Through diplomacy you can forge alliances, defensive pacts, improve relation, insult a nation, arm rebels, the list goes on and on. Many of the actions have been found in previous Paradox games and are all different means of moving a multitude of resource sliders across your nation and those that inhabit the world around you. Thankfully everything that an action will do is laid out in a pop-up box that comes up when you hover over the action, so you aren’t forced to remember what is exactly needed for a defensive pact to be formed. The lack of an in-game encyclopedia or note function is felt though, especially with how complicated some of the actions and names can get.

Surprisingly, the war options are some of the best I’ve seen since I picked up the grand strategy genre. It’s still menu based and completely out of your control once the battle starts but you can raise the effectiveness of your troops by building garrisons of synergistic troop types then placing them into different roles and tactical stances. It’s not nearly as complex as Hearts of Iron IV has turned out to be, but the ability to choose tactics and stances is a great starting ground for future improvements on war.

There’s also a great siege mechanic that has you occupying regions where forts exist and setting up camp. Each month you siege, you randomly roll a number from 1 to 14, you also get a bonus based on how long you’ve been sieging. The higher the number, the more damage you do to those in the fort. Eventually, you will break them and take over the castle. I don’t know why I loved this mechanic so much, especially since it is so rooted in rng but it felt so right for the era that I couldn’t help but watch every month’s roll with eager anticipation. 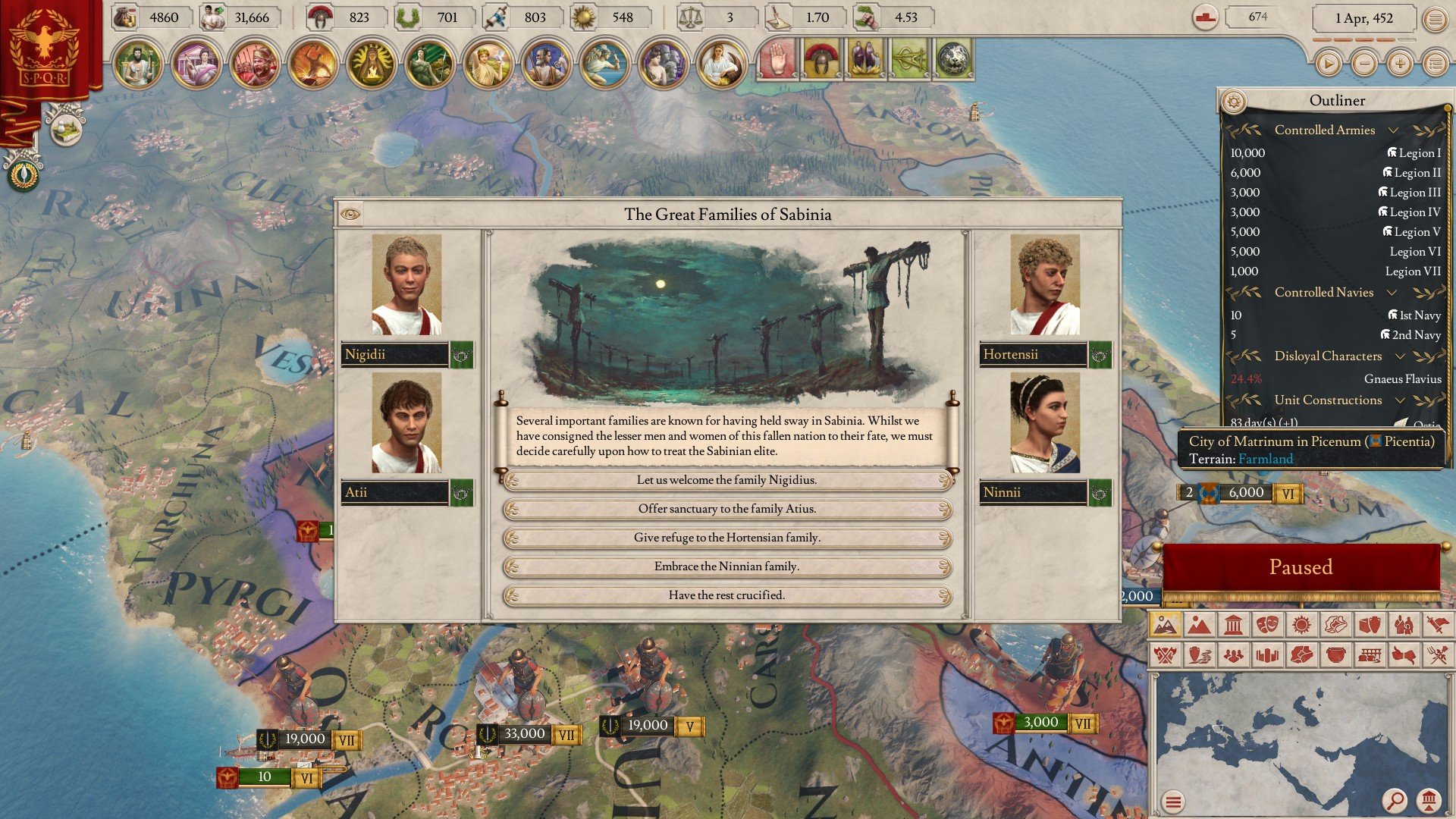 The population concept from Victoria II returns in Imperator but in a more easily digestible fashion. Each province on the map has a number of people living in it, these populations are split into four classes, and depending on how many of each class you have in areas you control, your production and unrest go up and down. Each populace also has a culture and religion attached to it which can cause headaches if you are a foreign leader taking over their land, or if people start to immigrate into your area from a neighboring region. You can manipulate the populace by using political or religious power depending on what you are trying to accomplish, which I found fun in a maniacal way.

Character interaction is back from Crusader Kings II but in a subdued role. You will always play as the leader of the nation you are controlling, but characters in your country can disrupt or even dismantle your rule. In order to stay on everyone’s good side, you must employ strategic manipulation through bribery and friendship and if that doesn’t work you can jail them or have them killed. There are always consequences for your actions though, and you must make sure you are prepared to deal with them down the line.

Religion also plays a role in the game but as more of a silent hand that guides you in the shadows. As stated earlier, your populace will have a specific religion attached to it, as will all of your surrounding nations. Depending on which religion you follow, certain actions between nations will be easier or harder. As ruler, you can invoke religious omens to different gods that will bring about different stat bonuses over a certain period. I have to admit though, after Civilization VI introduced religious warfare I was hoping for a bit more from Paradox with this release but the utilization of this mechanic has left me unimpressed.

Imperator: Rome feels like it’s yet another step in Paradox’s attempts to make the perfect grand strategy game. It pulls bits from Paradox’s storied past in the genre and adopts it for the ancient era. Because of this, it doesn’t feel like past releases where the game does one thing fantastically and falters in the rest of the mechanics but instead refines past mechanics into a marble bust of megalomaniacal fun. Ave Imperator: Rome!