Ever since I was a boy, I’ve loved playing pool. From the first game played in a childhood friend’s basement to the weekly game I participate in today, the sport has always enchanted me. There’s just something about the precision and psychology that appeals.

Plus, it’s always nice that to play doesn’t require vigorous physical activity, something I object to vehemently. Taking my laziness a step further by playing virtual pool that doesn’t require me to even get off my couch is only natural and, thus, I love videogame billiards.

And there’s a new kid in town on that front. Hit the jump and find Destructoid’s review of the PSN-exclusive Hustle Kings. 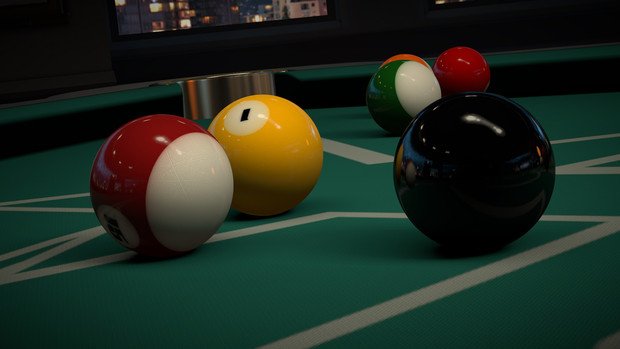 Hustle Kings is a rather fleshed-out pool simulator. Featuring 7 different games, including 8-Ball, 9-Ball and Cutthroat, there’s a lot to play here. It also has impressive visuals in 1080p. The game looks fantastic even if I’ve never seen tables and balls that looked so shiny and pristine in reality.

The consequence of playing on a perfect table is that it runs fast. Very fast. Balls will rocket around and finding the appropriate level of power will require some getting used to. The physics are dead-on, however, with cushions having an appropriate amount of pad to their bounce and balls react precisely how they should. It may be the smoothest felt you’ve ever played on but loses no points in execution.

That’s down to how players have near absolute control over the cue. English can be applied easily and has an exacting accuracy level. The cue stick, as would be expected, can be moved up and down independently of your aimed position on the ball, allowing for very complex shots. 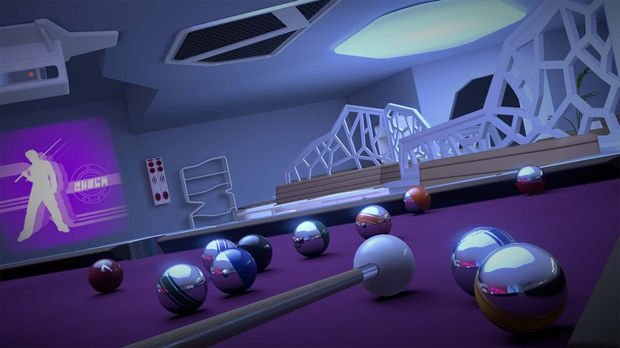 All of this precision comes with a price. The analog controls are highly sensitive and the slightest motion can send your aim careening away from where you wanted it to point. Holding the Circle button reduces this sensitivity a bit, but not enough for my liking and a sensitivity setting in the options would have been a welcome feature.

There are several ways the game assists in aiming your shots. An aiming line option exists, with two differing lengths and a reflection of how the target ball will react to being hit, but hardcore players will likely turn their noses up at this. You can also take advantage of three camera modes: behind the cue, above the table and focused on individual balls.

They’re functional, but they could be better. In particular, the view behind the cue could do with some additional player control. When I’m shooting pool, for example, I often don’t plan my shot looking directly down the sight of my stick. I’ll lean to one side or the other as I calculate my angle. Consequently, I occasionally miss shots I should have no difficulty with while playing Hustle Kings because I’m unable to perform a similar maneuver in the game. 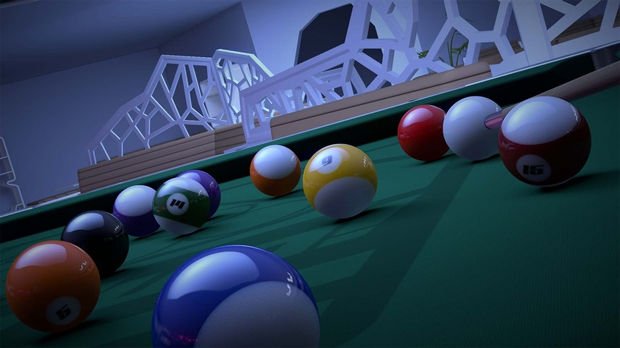 The game offers two different methods of control once you’ve determined your shot. The first involves using an analog stick to pull back and push forward. It requires a very smooth motion and is something I never managed to really get the hang of. I can’t really fault the game for my inadequacies, though, and have no reason to suspect that it’s perfectly fine for people who are less jumpy than myself.

Thankfully, a timing-based option is available where pressing the X button when a spinning cursor reaches a target results in a perfectly accurate shot. In this circumstance, the circle spins faster depending on how difficult it would be to achieve the intended hit.

No matter which way you go, it’s very, very accurate, to the point at which using chalk to improve your shot is a consideration. To reflect this, VooFoo chose to implement some motion control and shaking the controller will chalk your cue. It’s a cute little touch, but one that I have an issue with. The game offers additional, special types of chalk that have differing effects which can be used a limited number of times per game. If that weren’t somewhat silly already, you’re expected to pay cash money to the tune of 99 cents for each of these as DLC. 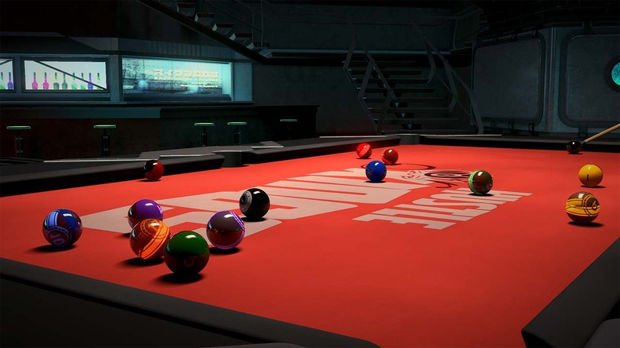 Hustle Kings, for all its attention to detail, is all about style. Pulling more complicated shots, such as banks, jumps and combinations, award bonus Hustle King Credits, an in-game monetary system. Earning HKC is important, as it’s how you’ll buy your way not only into the career mode’s later challenges but can be wagered against other players in online play and used to purchase new balls, cues and bonus games.

Nowhere is the game’s focus on making badass shots more evident than in its AI. There are three different levels of opponents but, far as I can discern, the only difference between them is the frequency with which your foe completely botches their stroke. On Easy, about every third shot is a flub. Hard opponents might make a mistake in a game, maybe.

In other words, playing the computer is a nightmare. At first, on Easy, you’ll just think they’re functionally retarded. But you’ll soon realize that where they never make an error is in planning their shots. And the computer isn’t so much playing to win as it is playing to utterly humiliate you, regardless of the difficulty setting.

There’s little (if any) regard for strategic shot planning. They will almost never go for the straight pocket, preferring over-the-top, multi-bank and combination shots. While one could argue that it represents a play style hinged on intimidating the opponent, I can’t see any serious competitor relying upon the kinds of shots the AI routinely makes with ease. It quickly goes from being amusing to infuriating and there’s little reason to bother with playing against the computer short of wanting to pick up some easy HKC in the career mode. 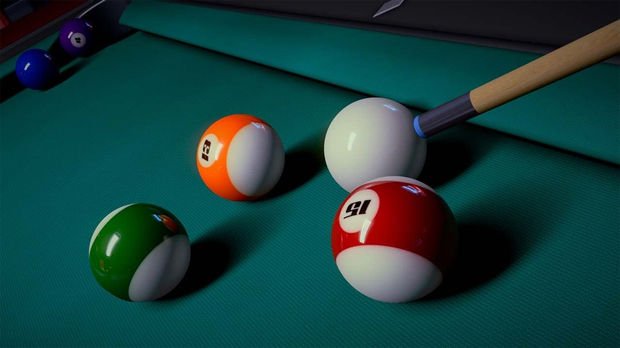 Hustle King’s career mode spans four levels, each containing ten challenges that run the gamut on available game types. Some are structured with a buy-in and payout in HKC while others, called “Hustles,” have you betting against them for an amount determined by bid and raise. There’s neither randomness nor negotiation to this. If you bid and they raise (not all opponents do), they’ll raise a certain amount and you can either accept this or not play. While not unreasonable, any veneer of this being more than just an “if, then” bit of programming wears away very quickly.

Where you’ll likely wind up spending most of your time is in the game’s online play. Players can set up rooms of up to 32 players with a bevy of options, including an all-important shot timer. Rooms can be set for practice, ranked or Hustle matches. Once the room is created, players who join challenge one another to games, with the players’ skill levels indicated by a score.

Entering rooms and making challenges is easy. You can challenge several players at once, with the first to accept a challenge being the one you play against. This is a great idea, taking much of the frustration out of finding a game and then waiting around for someone to respond before inviting someone else. 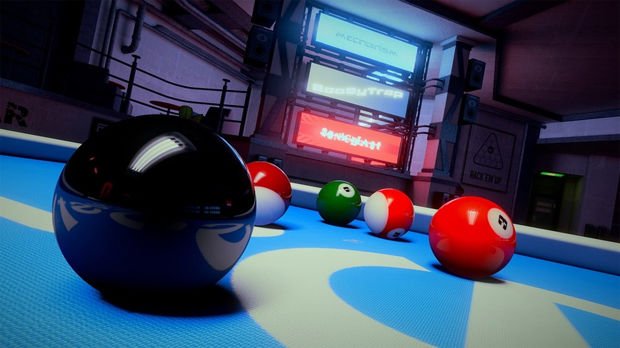 It isn’t without its problems, particularly if someone has a network error. While I’ve never experienced someone dropping in the middle of the game, on several occasions I had difficulty getting into the game in the first place. While this would not normally be something to complain about, Hustle Kings has a tendency to lock up whenever there’s a problem of this nature, sometimes to the point of disabling the XMB and forcing the player to manually reset the PS3.

While not perfect by any stretch of the imagination, it is one of the better video pool games I’ve played and certainly worth a look if billiards is your game. With its robust online options and excellent physics, Hustle Kings is excellent if occasionally frustrating fun.