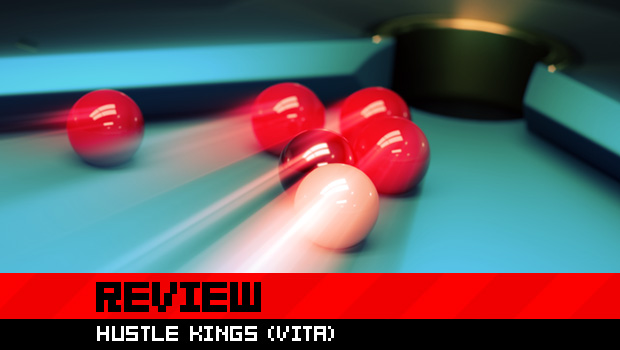 “I’m a hustler, baby. I just want you to know.” Well, those would be the lyrics I would sing as I entered my local pool hall, hoping to scam friend and stranger alike in a friendly game of billiards.

Of course, I was no hustler and always ended up either losing money or not even having the guts to bet in the first place. That is why I turned to videogame billiards. It offered a precision I couldn’t gain on the felt tables, mainly due to my lack of geometry skill.

Let’s see if I can get through the rest of this review without using the phrases “Every day I’m hustlin’” or “pocket pool.” 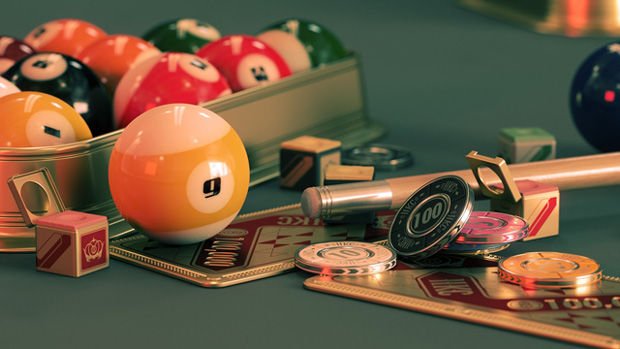 Hustle Kings was first available on PSN for PlayStation 3 almost two years ago, and the Vita version remains almost the same as when Conrad reviewed it. In fact, if you purchased it for PS3 when it came out, you have a free download of it for the Vita version now and vice versa, a nice introductory offer for early adopters.

If you haven’t played the PSN version, Hustle Kings is a surprisingly deep pool simulator. There’s a diverse selection of seven different billiards games, including 8-Ball, 9-Ball, and Cutthroat. The Vita version even retains the graphically stunning pristine tables and overtly shiny balls of the original. However, one key feature separates the two: the touchscreen.

The original game was controlled using the analog sticks or timed button presses, whereas the Vita version almost exclusively utilizes the touchscreen. Shots are made by pulling back on the cue in the bottom right corner of the screen or, in some instances, pushing it forward. How straight you maneuver the cue determines your accuracy. While most shots are lined up on the touchscreen, you can thankfully adjust them with the analog sticks (and further fine-tune your shots by holding the circle button). Lines appear to show where shots will land, and increasing or decreasing power and angle adjusts those lines accordingly. 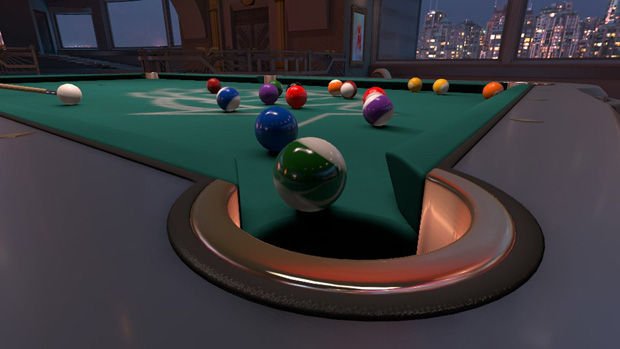 Precision has remained the same, with the right analog stick’s adding English for backspin, swerve shots, and more. There’s a good emphasis on trick shots, and while I can’t make them in real life, I pride myself on being able to execute jump shots and arching swerves to pocket my ball right where I want. The control and realistic physics make any player feel skilled.

The simulation extends to the need to keep your cue chalked. No chalk on the cue can cause your shot to become wild or to lose accuracy, and the game offers multiple chalk types that grant “power-up” abilities, though they have limited uses. Chalk can be purchased as DLC, and some can even be won as you progress through the career mode.

Your shots earn you HKC, or Hustle King Currency. The more complicated the shot or the more consecutive shots you make, the more you earn. HKC is used throughout career mode to enter tournaments, to purchase new balls and cues, and to wager against other players online. 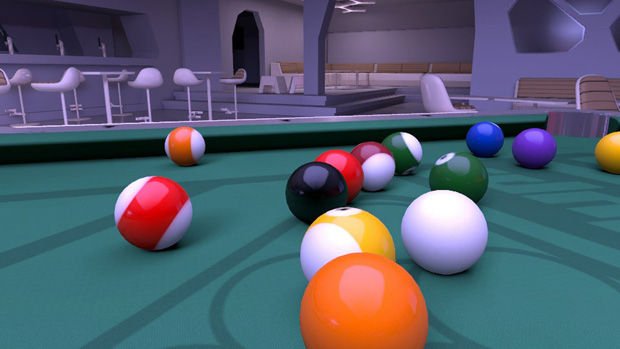 The career mode, while fun, has terrible AI — in earlier (read: easier) levels, the AI seems to miss shots on purpose, whereas in later levels, it has a stupid level of trick shot accuracy. Online is where most will spend their time. Players can set up a ridiculous amount of parameters for matches, including game type, player count per room or per table, and shot clock timers. Betting or “hustling” players online for your HKC is the main goal, but players who just want to compete for fun are welcome as well. One of the nicest features is the cross console support between Vita and PS3 players.

Hustle Kings may not be everyone’s cup of tea on all fronts, but as far as pool games go, it’s one of the most solid I’ve played on ANY console. After playing both versions, I think I actually prefer the Vita version. The touchscreen controls may seem like a lot to take in at first, but their precision and accuracy make simple shots a breeze and the more complicated trick shots even more fun. It’s not a perfect game, but when you get both the Vita and PS3 games for one price? You can’t knock the hustle, baby.

Oh, dammit! Forgot about that one.