Help yourself to some salmon pie

I am, admittedly, a sucker for unique art styles. Sure, I enjoy lush graphics, beautiful pixel art, or stylish cel-shading, but they don’t grab my attention in the same way as something that forges a path in a different direction. I get excited around the styles that Bernband, Burrito Galaxy, or even the simple papercraft worlds of Brendan Chung’s Citizen Abel games pull off. Heck, I’ll admit to being fascinated by Paper Mario.

That’s what drew me into Hotel Sowls. I was instantly charmed by its blobby, lo-fi art style. It’s something I haven’t really seen before in a video game. It seems to wear its personality on its sleeve. That’s only the start, though. Now it’s time to get it up on the autopsy table, peel back its skin, and see if there’s any of that personality seeped into the meat itself. 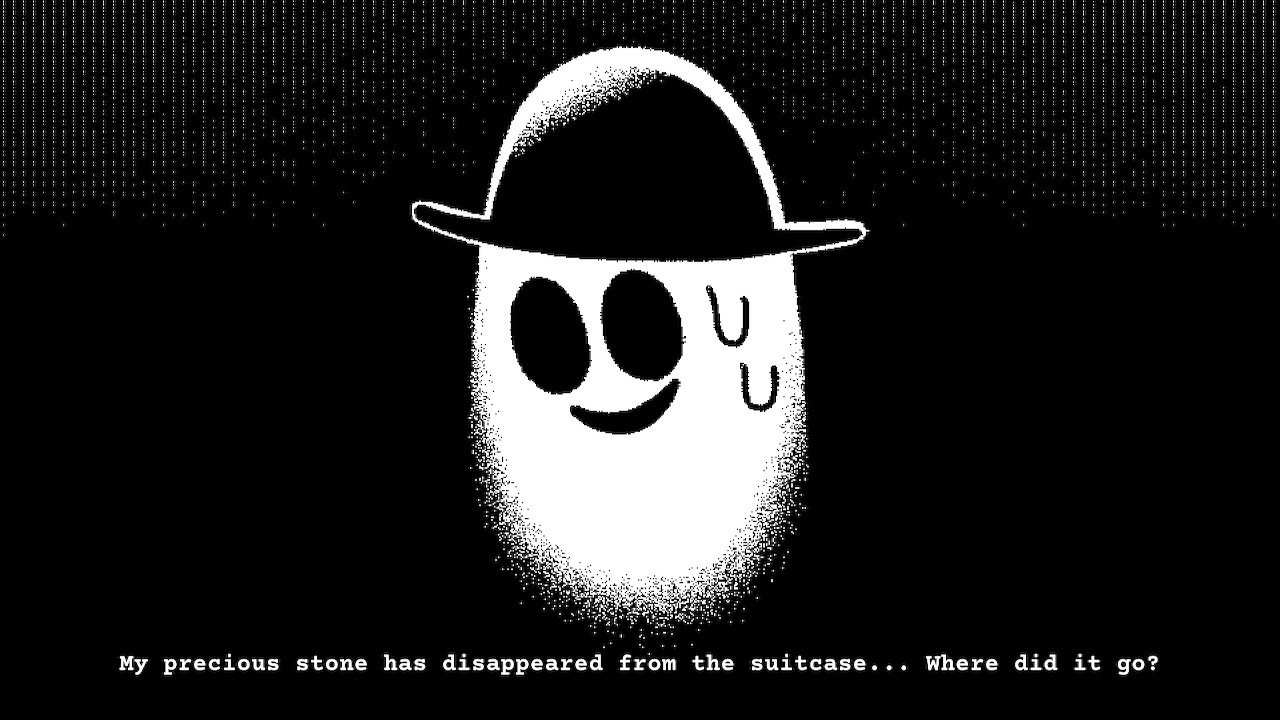 The narrative to Hotel Sowls is as simple as it is weird. You play as a misshapen pharmacologist in a bowler’s cap who spends all their life savings on obtaining a mysterious stone. They have dreams of researching it and developing a new medicine that will win them the Nobal Prize. However, they make the mistake of staying at a nearby hotel, and after waking up the next morning (with a hangover, in my case), they discover their stone has gone missing.

The difficulty is that they only have five days to stay in the hotel, but don’t let the pressure get to you — time only advances as the story progresses. You’re left with no clues as to who did it, so it’s up to you to question the staff and uncover the mystery of who broke into your room and stole the precious stone.

At its core, Hotel Sowls is an adventure game. You can even drop it into the point-and-click subcategory, because on the console version, interaction is done via a cursor. I kind of hate it. Just give me an action button. I generally left the cursor hovering over my dude and just used it for that purpose anyway. To make matters worse, during my playthrough, the cursor got stuck in its action state, so I couldn’t even use it to tell what items were interactive. I’m getting off track here.

You’re generally left up to your own devices as you explore the hotel’s six floors and collect clues about where you’re supposed to head next.

This can get a bit obtuse. I was able to reach the “true” ending without using any sort of external guidance, but there were times where I wound up walking in circles until I typically discovered something to suck into my inventory that I overlooked because everything blends into the background. Your character will tell you what you should be focusing on, your journal keeps clear notes most of the time, but no one is going to tell you where to meet “IT,” or that the bottle on the table can be picked up. You’re on your own there. 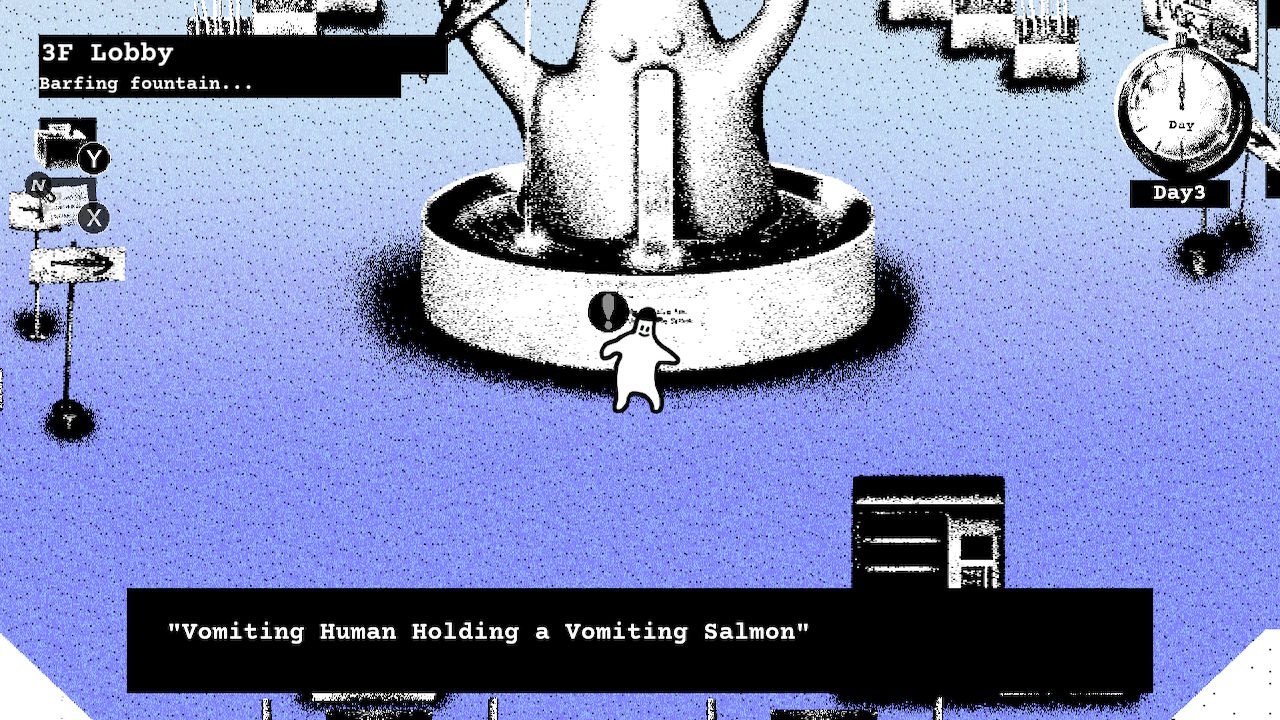 Even though the hotel is presented as one big puzzle and it proudly displays that there are multiple endings to find, you’re not given free agency to solve the mystery. Hotel Sowls is almost entirely linear. By questioning staff, interacting with the environment, and picking up items, you’re really just seeking flags that will allow you to continue to the next portion of the game. It’s very mechanical in this way.

The multiple endings are a cute treat, but you’re not going to organically reach one or the other based on the choices you make. Rather, it’s more down to which one you choose to trigger. There are some inventive ones, and finding them all takes some thinking outside the box, but like much of the game, it’s very mechanical. 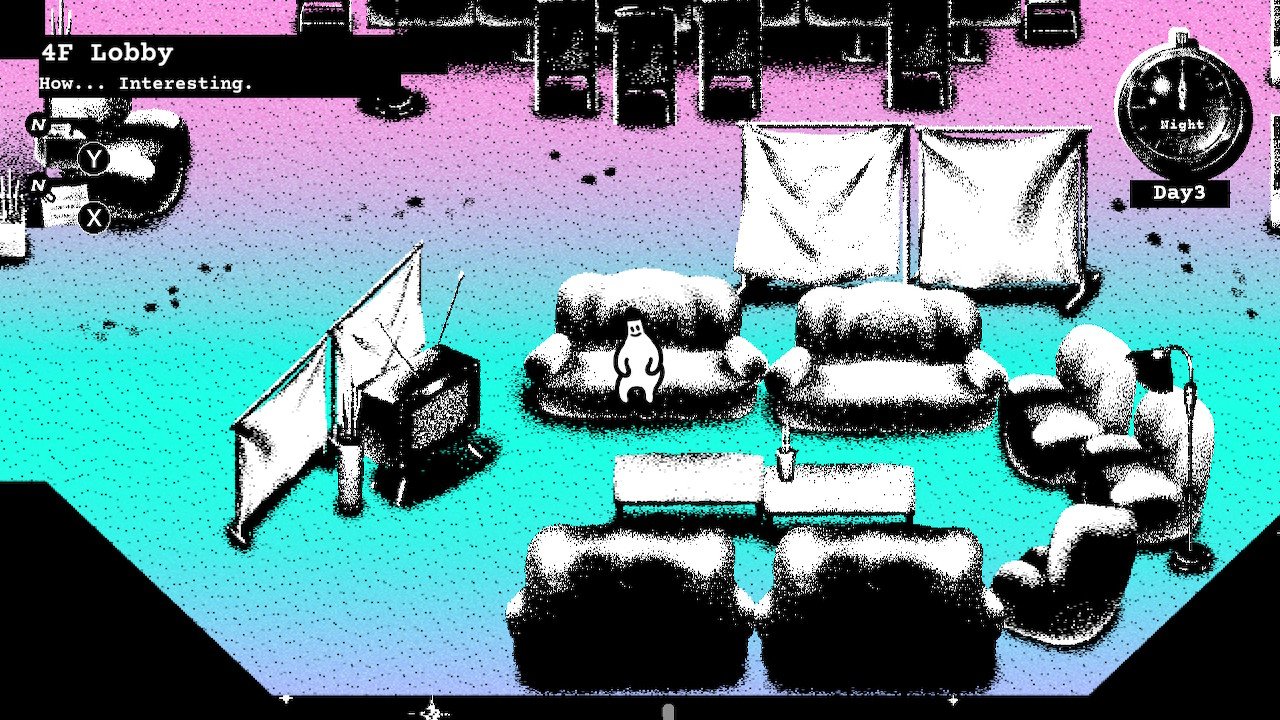 As for the plot, it too unfortunately suffers from a lack of spark. It’s presented in a charming fashion with stilted dialogue, weird characters, and even the makings of an unsettling backstory. But when it comes to cashing in on all of these otherwise tantalizing facets, Hotel Sowls falls short.

The characters, as weird as they appear, are a little dry underneath. Many of them just seem to be harboring a subtle hostility towards you and each of them is a part of a dark secret, but almost every one of them is interchangeable. The chef is committed to nutrition, the bartender is obsessed with lemonade, the security guard is shirking their duty out of world-weariness; but that’s about as deep as they go. Their entire person can be summed up in a short journal entry.

So when it came time to start having feelings about them, I had nothing to muster. Any emotional payoff that the game’s story might have had was completely lost. There are certainly parts of a good story, but it’s not explored well enough to really have an impact. 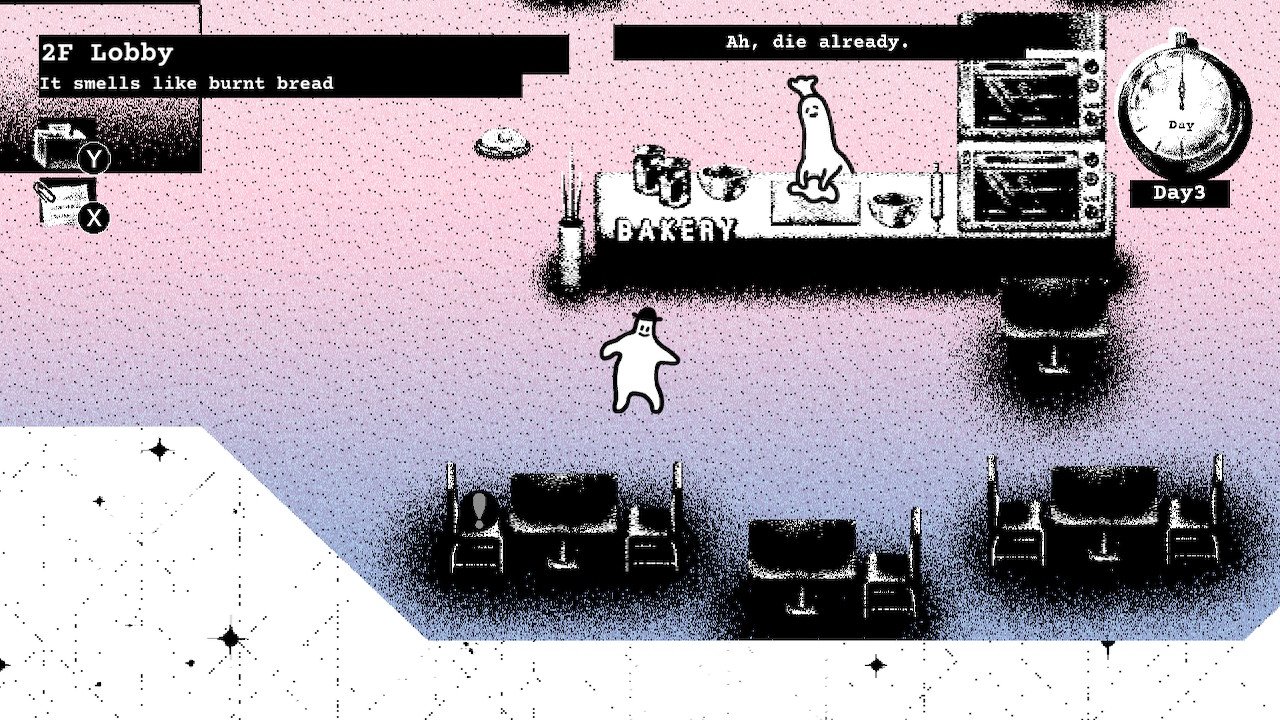 That’s not to say Hotel Sowls isn’t a serviceable game, it’s just that there isn’t much to grip you beneath its unique aesthetic. The art style, the atmosphere, and even the music are all very much on point. It’s easy to get sucked in by what it displays on the surface.

However, beneath the veneer, there isn’t much that makes Hotel Sowls shine. The plot, the characters, and the gameplay are all wax-paper thin. The game ticks away mechanically under its inspired art style. I’m actually taken aback by how soulless Hotel Sowls really turned out to be. I guess it just goes to show that you can’t judge a hotel by its chandelier.