This is no Picasso

I’ve really been delving into the indie scene lately. There’s a huge amount of games coming from smaller development studios, and I’ve found a few that really impressed me. When I heard that a “crime noir Metroidvania with a cat in a fedora” was available to review, I was all in. I mean Cave Story, Terraria, and Shovel Knight are indie titles that could all fall under the fairly vague “Metroidvania” genre and they’re some of the most critically acclaimed games of all time.

As I played Hot Tin Roof: The Cat That Wore a Fedora, I found myself alternately intrigued and absolutely disinterested. Some things were well executed, while others were distracting and annoying. Having such fond memories of exploring Castle Dracula and Zebes, I expected a title that took on their mantle to continue the gaming traditions they established, but what was here was sandpaper compared to those classics’ smooth marble. 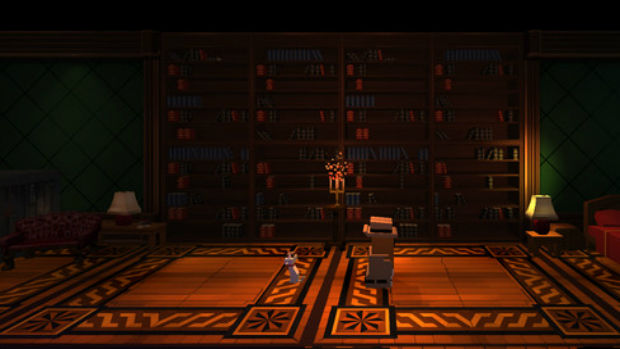 You control firefighter turned private investigator Emma Jones and her sidekick Franky, the titular fedora-wearing cat, as they begin a case involving a death and a missing will. That’s the intro; a phone call and you’re off. Emma and Franky are obviously great friends, but there’s no establishing motive or history for their friendship to start you off with. This instantly removed me from the story because it turns the dialog into a huge inside joke. As the game continues you find out a bit about the two’s history, but by that point I was no longer immersed because it felt exclusionary, like I was hanging out with a pair of people who went to grade school together and constantly referred to things I was never a part of.

The writing itself is of dubious quality. Some of it is genuinely funny and engaging, while other times it feels stilted and dull, as if the developers just needed more length to the script. Most conversations you take part in have at least a couple branching paths, but inconveniently you can’t switch topics while talking to someone. You have to finish your discussion, close the dialog box, and then go through the whole thing again until you reach the other branch you want to go down. With some branches being embedded in other branches it was a pain at times, especially for someone who likes to read as much dialog as they can in a game.

The majority of your time in the game will be spent roaming the city searching for clues. This is really where the game both shines, and becomes incredibly frustrating. The city and interiors of buildings are great looking, and I really liked the 3D spin on the traditional “Metroidvania” setup.

However, the omission of any sort of cartography took one of the things I really like about this game and made it into something that became more and more maddening as I played through. Imagine having to memorize all of Castlevania: Symphony of the Night’s map, but with turns and corners. So instead of know that to get to the Library you have to go right and up, you have to memorize, take a right turn, go right, take a left, keep left, and you’re constantly going to new locations as you find more clues.

Progressing through the game is primarily a case of using Emma’s non-lethal revolver to solve puzzles, and gathering clues from various locales and using the information gleaned from them to question people to find where to go next. The revolver can be equipped with various specialized rounds, bubble rounds to reveal hidden levers and areas, fire rounds to burn certain materials, knockdown rounds to knock things down and propel you through the air, and several others.

The revolver must be changed out or reloaded individually by clicking to first remove them then clicking on the empty chamber to reload it with the selected bullet type. The biggest problem I had with the gameplay and probably the whole game is that it never really tells you anything. Sure Franky might give you hints at certain points, but I went almost the whole story without knowing you could just hold the “R” key to reload without having to click all four chambers, which was one of the things I found supremely tedious. A tooltip stating that fact would have saved me a lot of sighing. 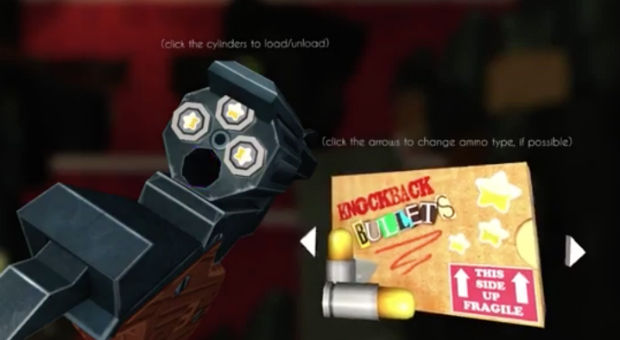 Hot Tin Roof isn’t terrible by any means, it just seems as though Glass Bottom Games had certain things it wanted to put in a game only to realize it had to actually make all those things fit together and the studio never really quite figured out how to make it flow naturally. The first part of the game definitely showcases their best work, and in contrast the latter parts of the game seem tedious with platforming sections and a marked departure from the humorous, exploratory tone of the initial sections of the title.

My enthusiasm as I went through Hot Tin Roof slowly diminished until the only reason I felt compelled to finish it was for the mere sake of completion. There’s quite a bit of good stuff here, I loved the city and the 3D effects in it, and I would have loved to see it on a platform like the Nintendo 3DS where its playstyle would be more at home. All in all this game isn’t a horrible experience, and for those that can get past the disjointed feeling of its various components there’s a decent time here to be had.