There are two kinds of people. And maybe sometimes some overlap in between. There are people who think Top Gear is a UK television show where the host punched a man on the face and now is on Amazon Prime instead. And then there are those who think that Top Gear was a Super Nintendo racing game by Kemco in the nineties.

Both are right, though the Top Gear game has no relation to the television series. It was one of the first games I ever owned for the Super Nintendo, and had a sense of speed rivaling F-Zero. It had a couple of sequels, but only the first game and Top Gear Rally were scored by Barry Leitch, and this is important because the soundtrack for the original Top Gear was awesome, sporting a couple of burrowing ear worms which have stuck with people to this day, leading to all sorts of remixes and tributes on YouTube.

So bless me if I didn’t get all choked up when realising that an inconspicuous little racer called Horizon Chase Turbo, available on Steam and PlayStation 4 by Brazilian developer Aquiris Game Studio was not only inspired by Top Gear, and essentially a superior spiritual sequel to the original, but also had the original composer in tow for the ride. And what a blistering ride it is. 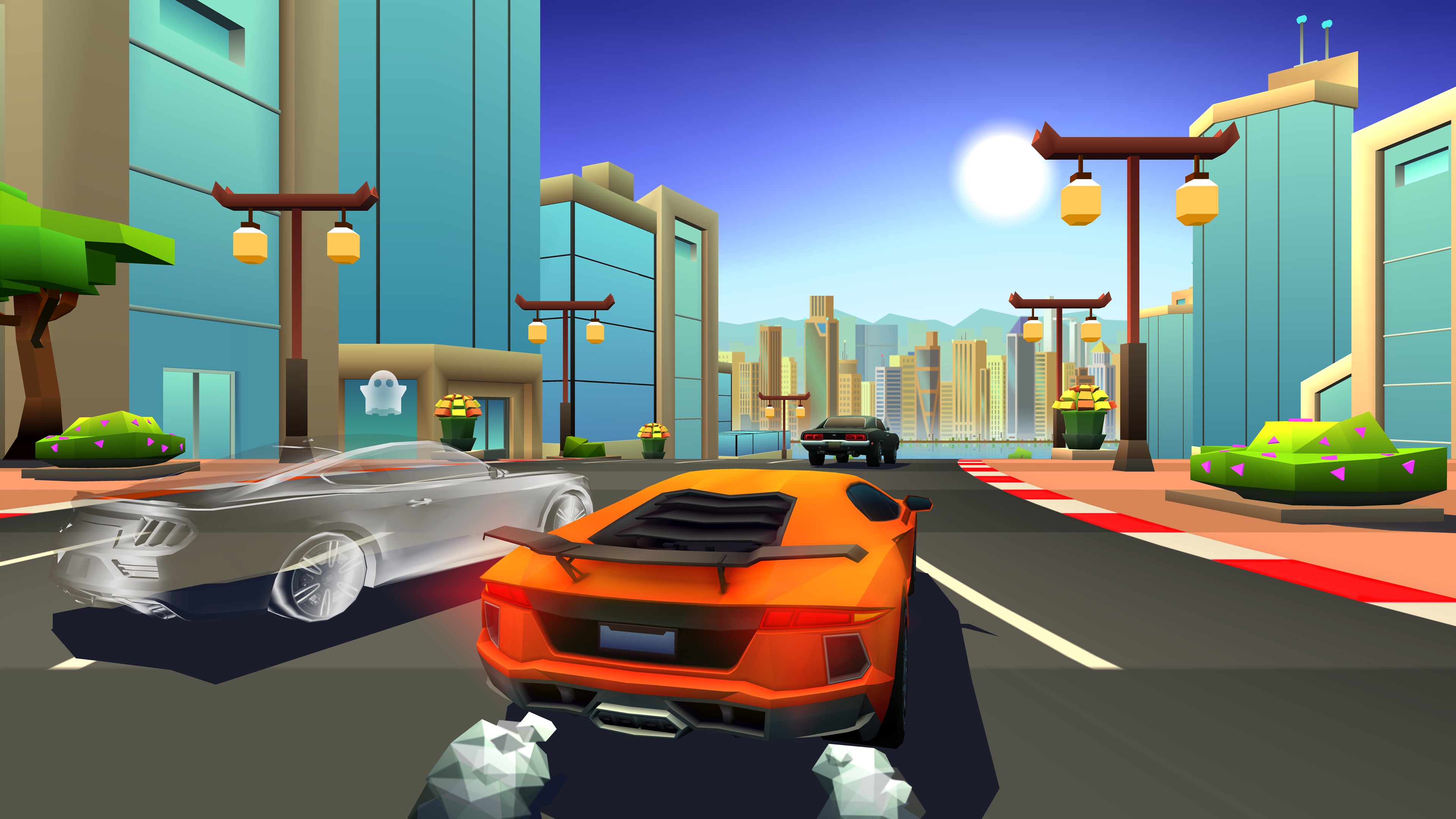 Citing other games like Outrun for its inspiration, while fair since a lot of ’90s racers essentially functioned in a similar manner, it cannot be overstated how closely Horizon Chase Turbo mimics Top Gear in particular. If you break down the game to its fundamentals, it is essentially about sharp turns and avoiding other vehicles on the road. And while this may sound like an abundantly obvious statement, since of course that is what all racing games are about, the way these mechanics feel in Horizon Chase Turbo is very particular compared to other games in the genre.

The car damage of Top Gear 2 is gone, as is the complex upgrade system from that game and its sequel Top Gear 3000, with any of the realism of Top Gear Rally completely obliterated to leave only the heart of the original arcade-like experience intact. Races are short and brutal, and seldom will you find yourself cruising at the front of the line for more than a half a lap since every race is about the struggle to get there, with very little standing in your way to set you back once in front as long as your memory is good enough to remember the most difficult turns each track has in store.

There are also a lot of tracks. Instead of being set up like other racing games where you fight through a series of tracks and try to maintain a consistent rank, Horizon Chase Turbo is set up more like a mobile game (which is fitting since that is where it has been ported and expanded from) with three sets of two to four tracks per region spanning across different countries on the globe. Ranking in the top five places will unlock the next track in the sequence, with each victory accumulating points depending on rank and how many blue tokens the player was able to collect during the race.

If the player collects every blue token in a track and places first, they receive a super trophy and the maximum amount of available points for that track. Points accumulate and open up new areas, upgrade races that will unlock speed, boost, fuel, acceleration, and steering upgrades for all available cars simultaneously with a bit of flexibility in how those upgrades are applied, and of course new, albeit very generic, takes on popular vehicles.

Since tracks are over quickly, there is a real addicting “one more race” quality to the game that kept me not only retrying courses in order to get first place and grab all the tokens, but also continuing to progress to see what each new track would offer, thanks in part to the simple but gorgeous and whimsically coloured background environments and track detail which changed substantially from region to region. Weather effects such as snow and rain are present to affect steering negatively, and with the same composer behind the game’s soundtrack (including a few remixed tracks from the original Top Gear, which were a real treat to behold), I found a lot to keep me playing.

Beyond the ability to play every track split-screen with multiple players, and a more traditional Championship mode, the fact that the game also boasts over 100 tracks and around 30 unlockable vehicles makes for not only a wonderful down-to-Earth arcade racing experience, but also effectively makes Horizon Chase Turbo the best Top Gear game ever made, even if it doesn’t boast the name of the original IP.

I had a hell of a time with Horizon Chase Turbo. Of all of the retro revival games that have come out over the past few years, it is near the top of my personal list of favourites. I can’t get enough of it. For future iterations it would be cool to see a track editor, and maybe an online multiplayer mode, or some other way to implement variety into the core game since even with various tracks the experience can get tiring and is best served by short bursts of play, but I like what’s here. Horizon Chase Turbo succeeds in being a worthy successor to Top Gear and doesn’t try to pretend to do much else beyond that.