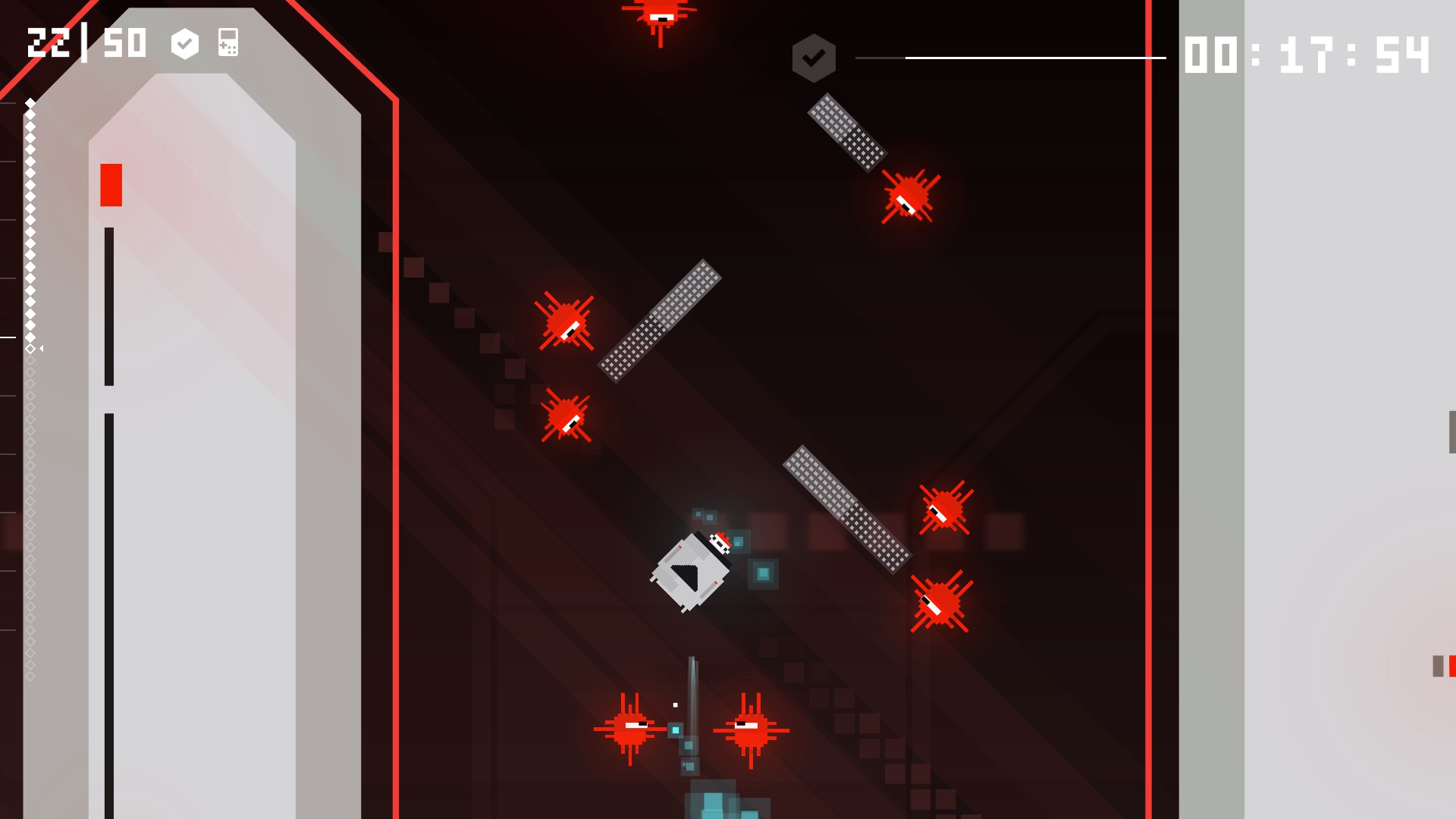 I’ve got the runs

Have you ever wondered why a lot of modern platforming games have nothing to do with platform jumping? While I appreciate the amount of diversity that exists within the genre, why are most of the obstacles usually enemies instead of the levels themselves? HoPiKo answers this by stripping you of movement and locking your actions to simply jumping.

It also packs an energetic soundtrack and lightning-fast gameplay. Not every aspect of the game is perfect, but the pacing and charming graphics definitely leave a lasting impression. 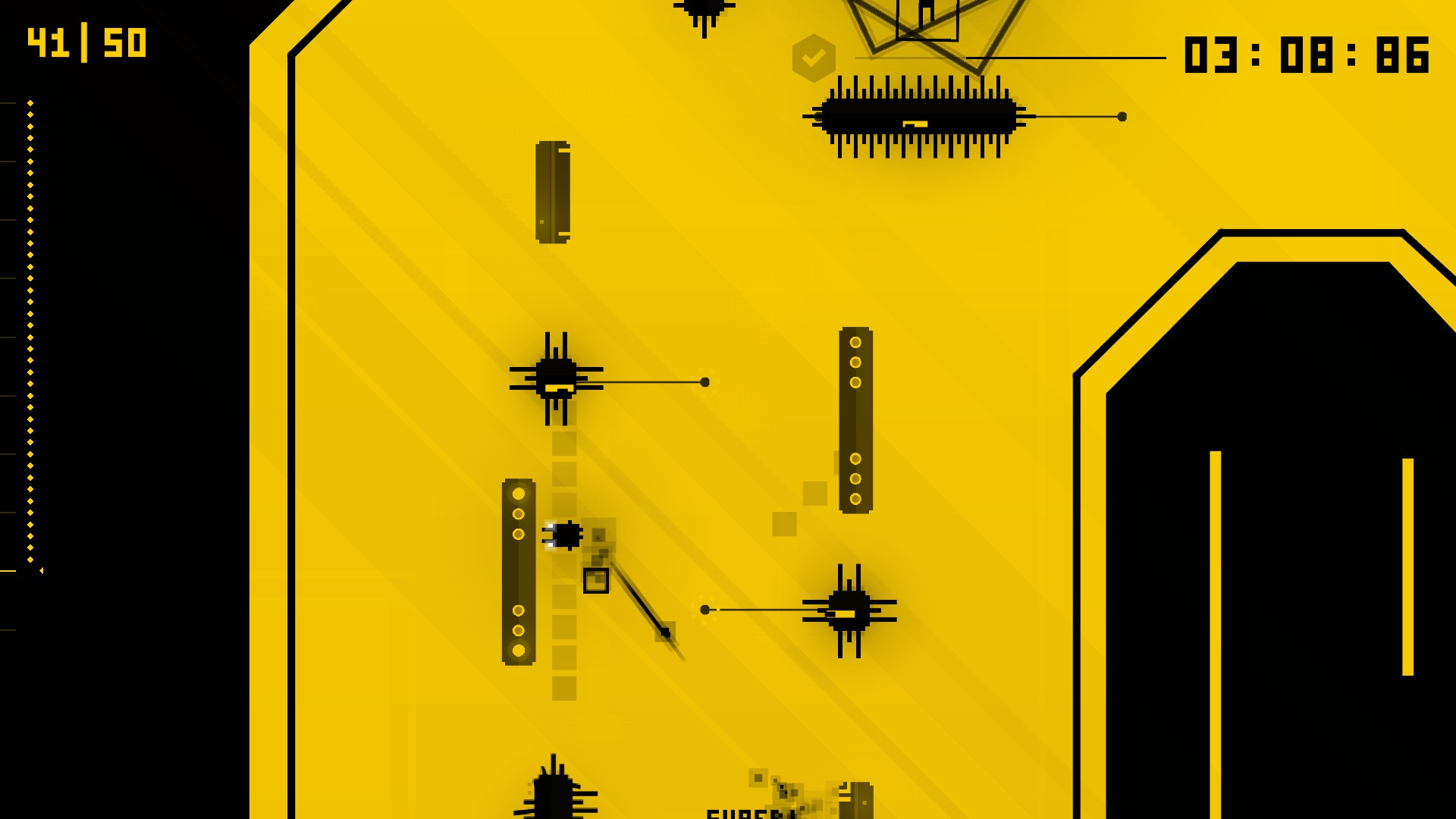 The plot of HoPiKo involves an evil virus, called the Nanobyte, taking over gaming and bringing an end to the pastime. Little, digital creatures known as the HoPiKos are tasked with saving the gaming world by destroying the virus and restoring functionality to every console in the world. I mean, I think that is what the game is about.

There isn’t much in the way of cutscenes or interruptions once you start playing. You get treated to an opening with some cute animations and then you’re off. Basically, if you’re looking for some deep exploration about why man loves to run, jump and overcome hardship, you’re out of luck. HoPiKo is gaming in its purest form.

Thankfully, there are a bunch of levels with varying degrees of difficulty to keep you occupied and away from pointless questions like, “What is my motivation?” As I said in the opener, HoPiKo is a platformer in the strictest of senses; the only thing you can do is aim your jump trajectory and then jump.

Everything is handled with either the right or left joystick (or mouse, if you so choose) and occasionally a button press. You push towards the platform you wish to jump to and then release the stick to jump. The button press comes from some Donkey Kong Country style barrels that fling you forward in a rapid fashion. The opening levels are very forgiving, even if the pacing constantly pushes you to be fast. There isn’t much in the way of obstacles and a lot of the different platform concepts aren’t introduced.

As you progress along with the game, you’ll start to see the formula get mixed up. The controls remain as simple as ever; the only thing that changes is what you are jumping to and the timing of your jumps. Some platforms will disappear after a short while and others will be propelled through the air with the momentum of your body. There are also rotating obstacles, walls that will kill you on impact, and even exploding platforms.

All of these are telegraphed through very distinct and eye-catching graphics. The design of the exploding platforms, for instance, either has a single dot or three dots to denote the time they will remain active. The moving lasers that shoot at you never rotate unless they are on clearly visible paths and even the enemies that shoot at you have clearly defined trajectories. 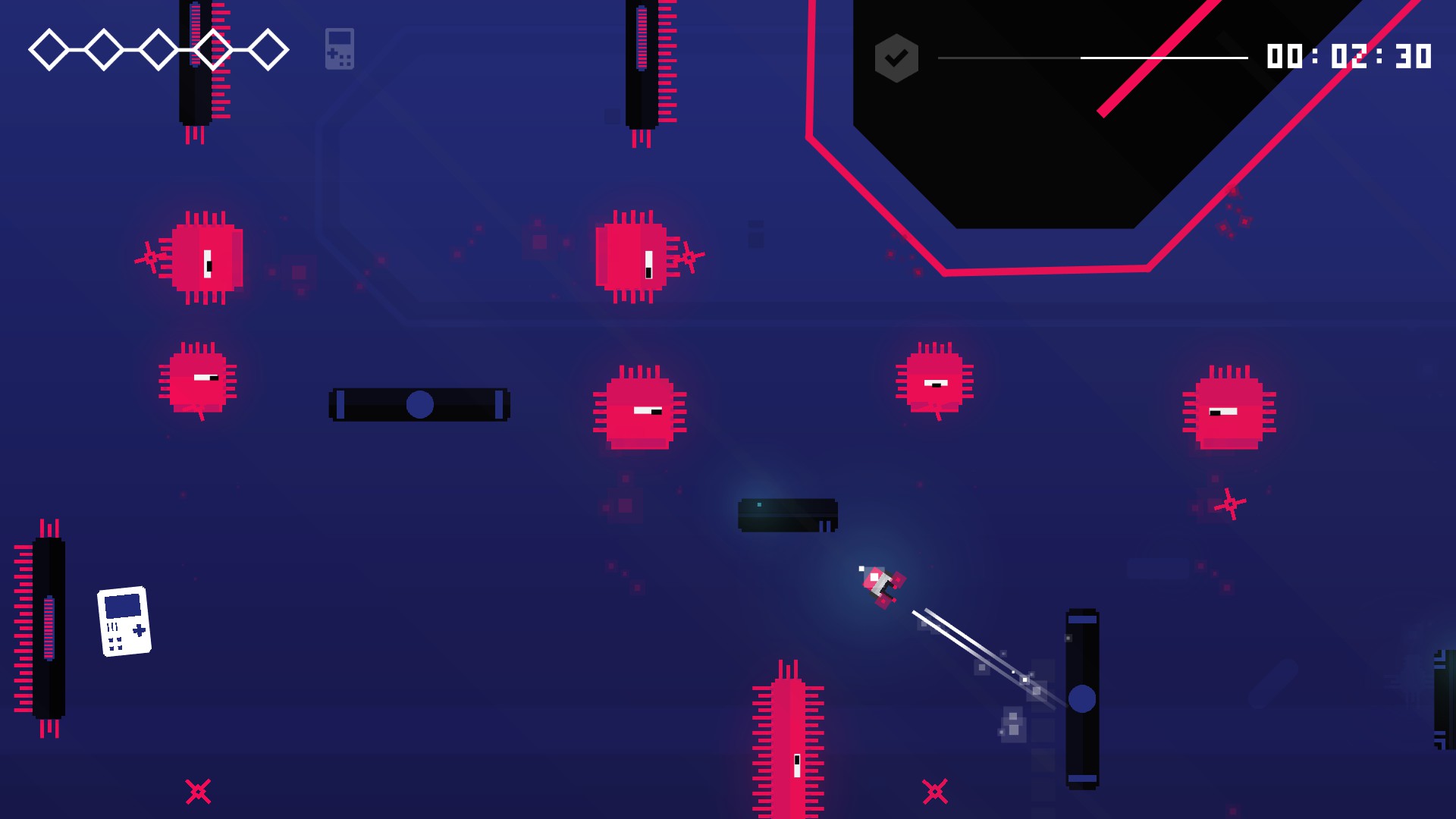 If it sounds like this should be complex, the real nuance is with the speed of the game. Being able to accurately tell what is coming at you is the mark of some really great design and HoPiKo has that in spades. This is similar to the enemy design from Doom in that you immediately know what a platform is going to do after you’ve encountered it once.

The biggest shake up to the standard platforming formula is that each world consists of levels in a group of “runs.” These “runs” contain five levels each and dying on any level sends you back to the first in that particular “run.” It would be far too easy to constantly try again and again on each level with no punishment, but this type of penalty may put off a lot of people.

For the most part, I don’t have an issue with it, but some of the later challenges aren’t properly separated. The difficulty curve does gradually introduce you to different concepts and challenges, but the final world has some of the harder levels up front, making the final “run” too easy. Then there is the exact middle of the game, which introduces homing enemies and throws off the careful balance that the game lives on. 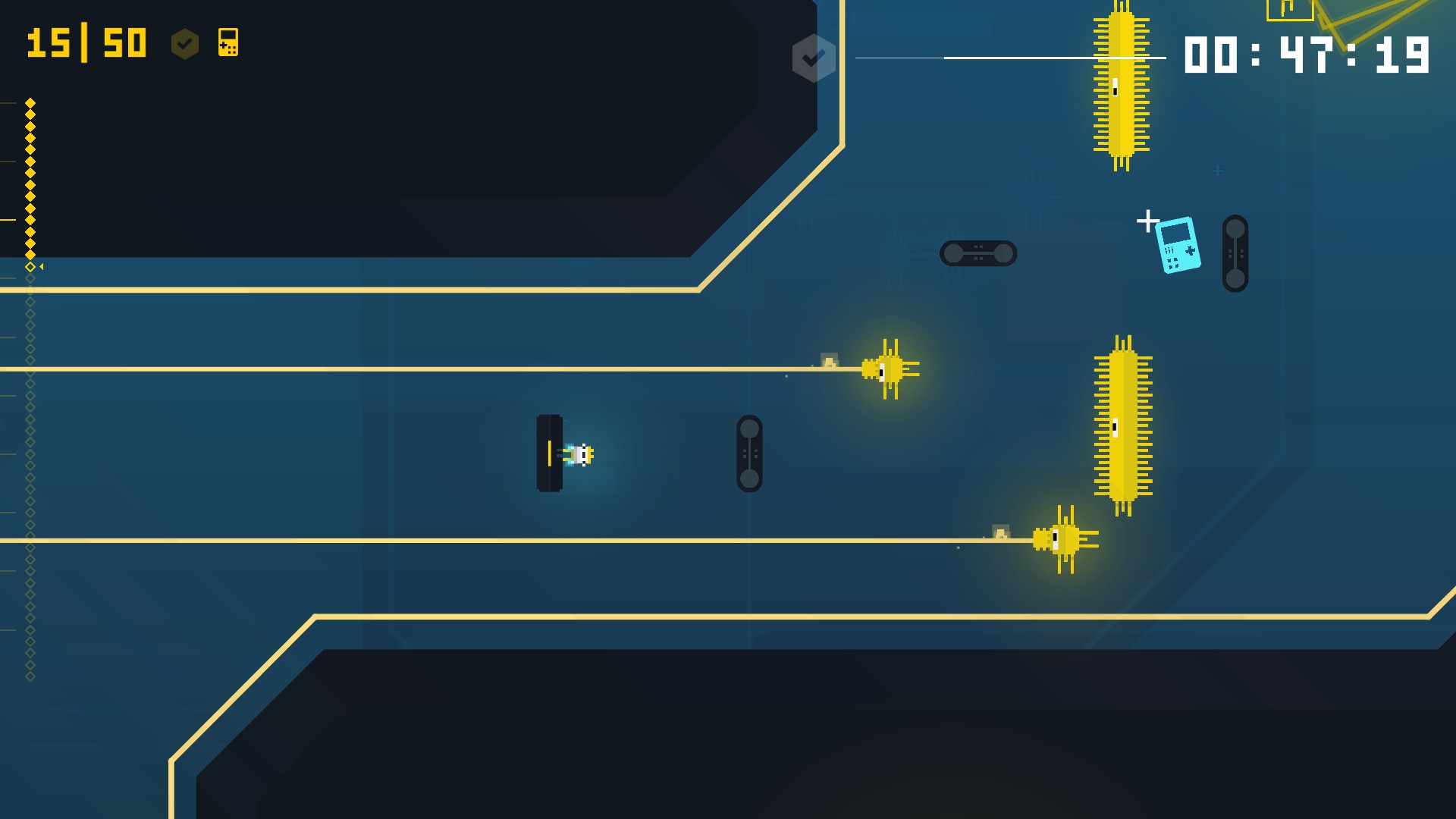 Since each mistake is incredibly costly and the general pace of levels is intensely energetic, having homing foes just feels unfair. Nothing is impossible to beat in this game, but holy crap did world three bring out the rage in me. Trying to take a single second to scope out the platforms ahead of you is nearly impossible in most of these levels, leading to a lot of unnecessary restarts. It really isn’t fun when you have no idea what to expect and an enemy is already on top of you.

Apart from those few “runs” in world three, everything else is fair enough. Heck, going back to the beginning after having beaten the game reveals how good I had actually gotten. You unlock hardcore challenges of each world after beating them, which tasks you with doing all 50 levels in a single go and I was able to complete it for world one without much effort.

Along with hardcore mode, you also get speedrun challenges and some collectible Game Boy-themed pickups. The speedrun is similar to hardcore, but you get to resume after every five levels and the main task is just speeding through the world. The Game Boy pickups unlock extra songs in the amazing soundtrack as well as granting you access to a bonus “run.” 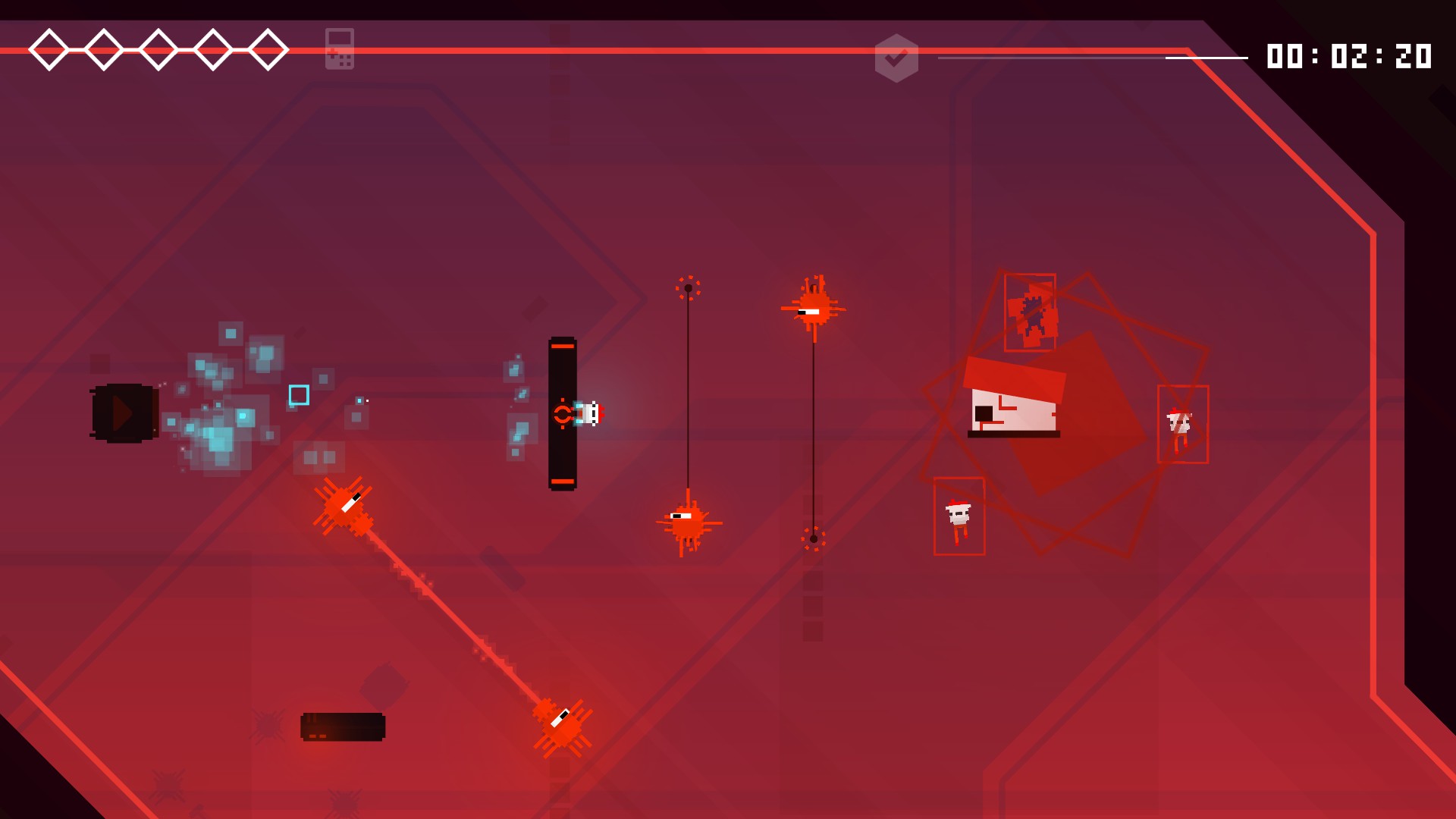 As cool as it is to have extra levels available, the bonus “runs” are bullshit. They introduce a completely different concept that doesn’t control well or mesh with the general gameplay of HoPiKo. You’re put into a flying barrel that you control by aiming the joystick in a direction, but the speed is so fast that you’ll often fly into a wall a few hundred times before you learn the damn pattern of any level.

I’m not sure what beating those levels unlocks, but they don’t hide you from a true ending. In hilarious fashion, the game also makes a joke about how lackluster most “classic” game endings used to be. You saved the day and got to have fun, what more do you want?

The presentation is what really makes this game, though. As fun as the gameplay is, those chiptune songs are absolutely amazing. They sound a lot like Super Hexagon, but the real hook was that each track was recorded using an actual Game Boy. This isn’t some approximation of what the retro Nintendo handheld sounded like, but the real deal. It brings out a huge sense of nostalgia while also making every level feel like a rave. 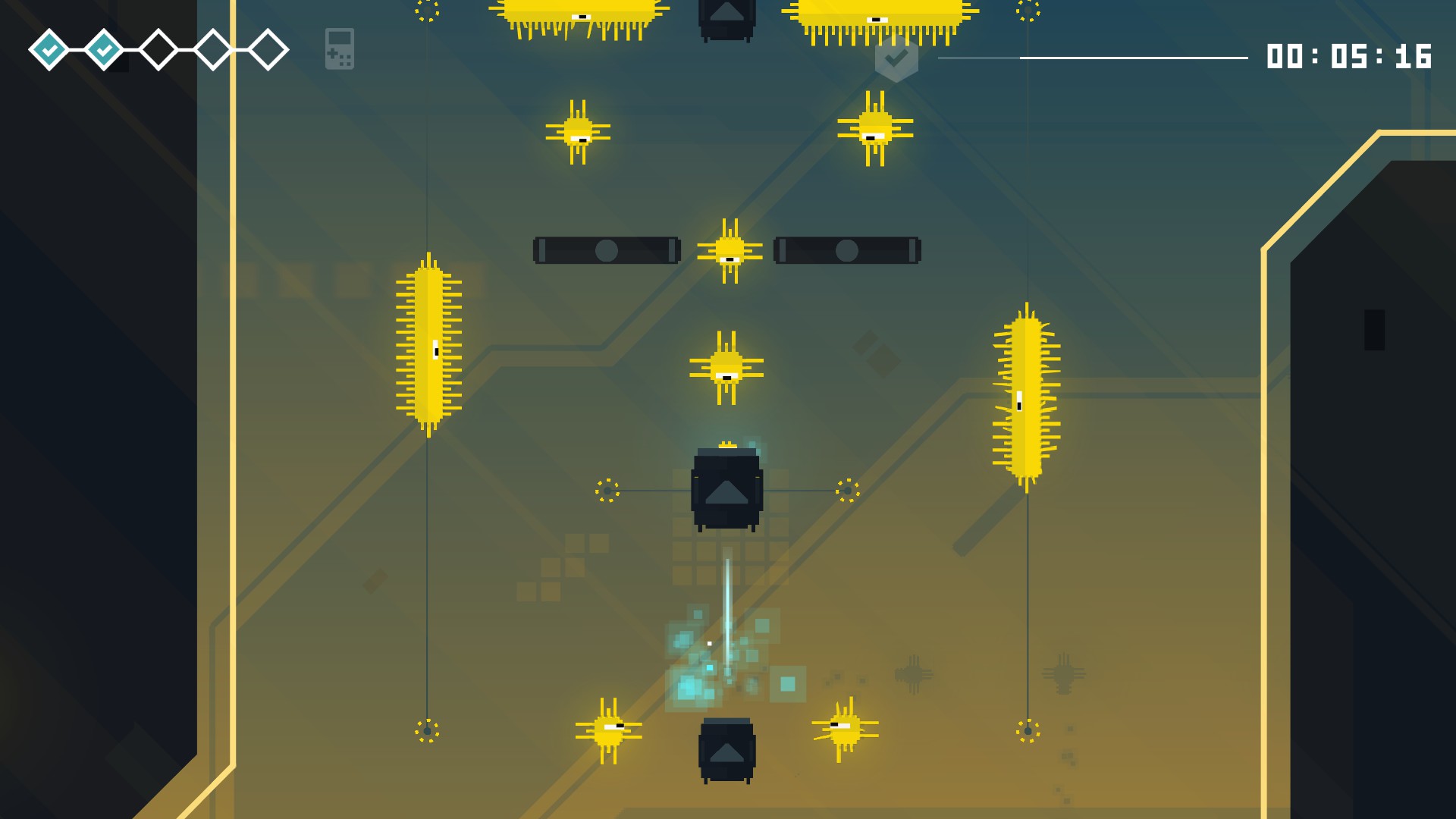 The graphics are also simple, but have wonderful palettes that mix up the colors to a striking degree. Not every color scheme works out, but it is hard to take your eyes off the screen once you get hooked. HoPiKo just looks great, no matter which way you slice it.

Sadly, there are some performance issues. Beginning life as a mobile title, I would have figured that my PC wouldn’t even struggle to run this game, but I guess I couldn’t be free of errors. I started playing on a pre-release copy that was riddled with issues, but most of the loading errors are absent from the release version.

What still remains are these strange tempo drops in the chiptune tracks. You can tell that the exact tempo of the songs was picked to ensure that players are jumping between platforms at the correct pace, but sometimes the songs sound like they are playing in slow motion. It doesn’t sound pleasant and can sometimes throw off your groove, but the actual controls and framerate never lag. 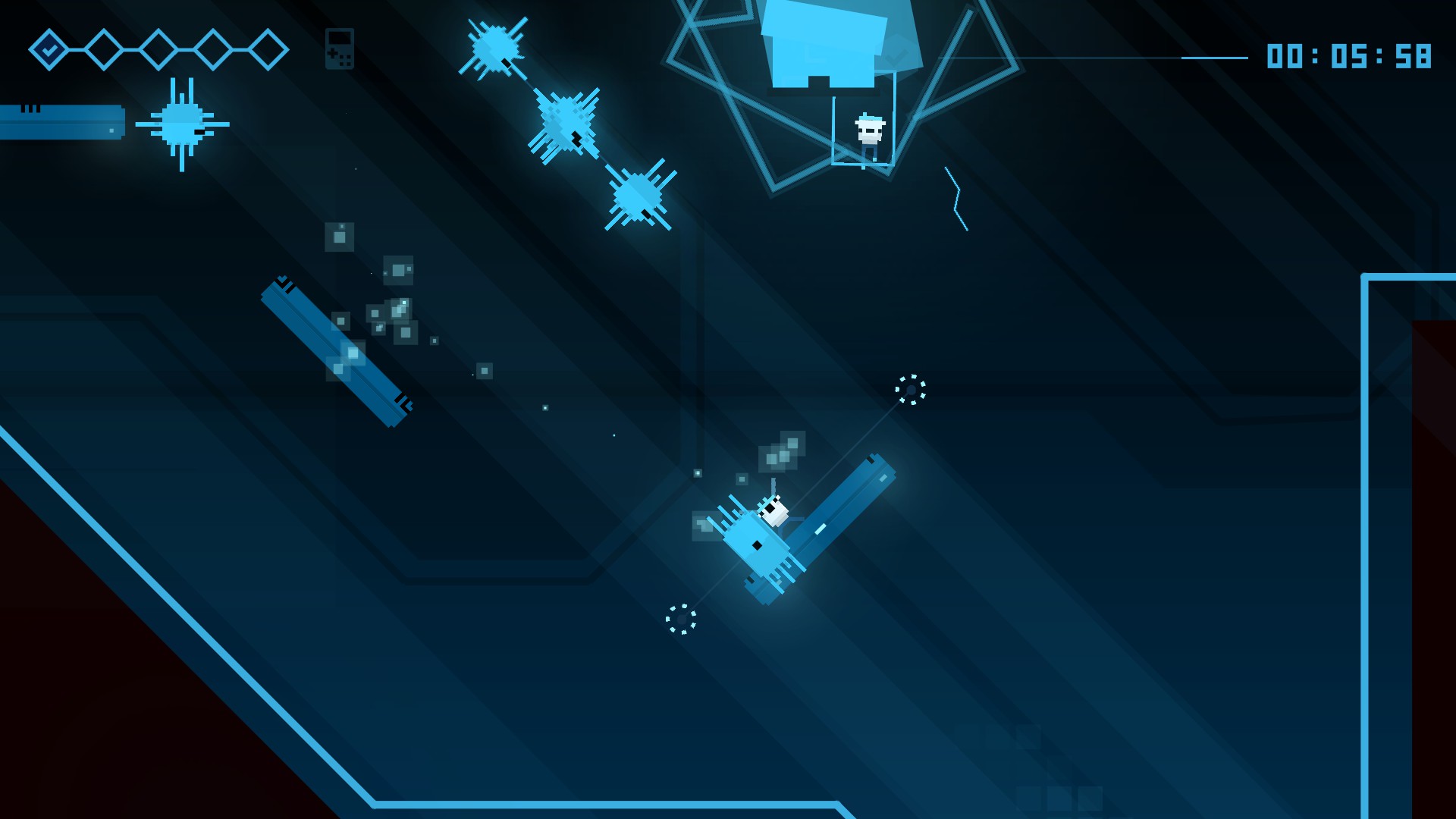 It is bizarre, but developer Laser Dog Games is diligent and should have a patch out within the not-so-distant future. I wouldn’t write off HoPiKo just because one aspect of the presentation isn’t always firing at 100%.

I think what surprises me most about HoPiKo is that I had never even heard of the game. Despite being available on mobile devices for nearly two years, I had somehow missed any of the footage or screenshots. That the concept is so well-realized and feels like it was made for more traditional control schemes leads me to believe that Laser Dog definitely thought long and hard about each challenge the game has.

Even if not every minute of HoPiKo is classic, I definitely think the game is worth playing. You can grab this new PC release or opt for one of the many other platforms it is available on, but don’t miss out. If nothing else, that soundtrack is worth the price of admission.