To say that Aardman Animations is a bit of a British institution would be an understatement; the characters Wallace and Gromit have starred in some of the best animated films of the last two decades. Outside of the Telltale episodic series, however, Aardman’s videogame presence has been minimal.

Shaun the Sheep was introduced in the third Wallace and Gromit film, A Close Shave, and then went on to star in his own children’s animated series. Now, Shaun and his friends are appearing in the followup to the original Home Sheep Home, entitled Home Sheep Home 2: A Little Epic on iOS and PC.

The game’s roots as an iOS puzzler aren’t hard to spot; from the intro screen we’re introduced to three separate episodes: Underground, Lost In London, and Lost In Space (not the late 90’s Matt Le Blanc flick, sadly). Each of these three episodes are broken down into 15 levels in which the objective is to get all three sheep — Shaun, his tiny nephew Timmy and his rotund friend Shirley — to the exit point on the right hand side.

Each sheep has their own special talent; Timmy’s diminutive size allows him to fit into tight passages, Shaun can break some barriers, and Shirley’s large size comes in handy as a platform or a weight. The way to succeed in these levels is by working out in which order you need to get each sheep to the variety of switches, ledges, and levers that you need to progress. Complete each level within a certain time frame along with picking up some collectibles, and you’ll end up with a score of up to three stars. 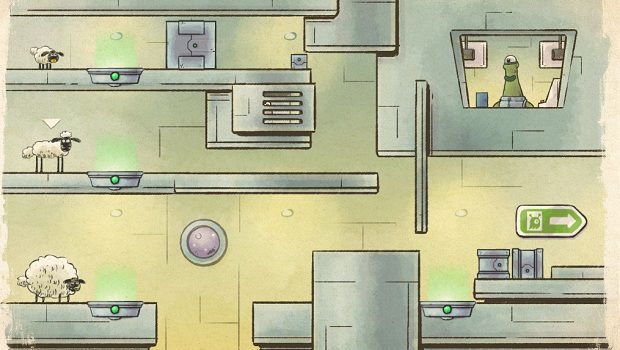 That’s really all there is to the game. You can see the influence of something like Angry Birds on Home Sheep Home 2; whilst the levels aren’t too taxing to complete, the desire to go back and play again to try to get all three stars does lend the game some replayability. The levels are just a single screen and can be completed in just under a minute, so even if you do get stuck, which will happen a fair bit, it’s super quick to restart and try again. Controlling the sheep is fairly natural on the PC as you can use the arrow or WASD keys to move the sheep, and you can select your sheep with the 1-3 number keys. Add in a well thought out and generous hint mode and you’re going to complete the game in hardly any time at all.

There’s some nice comedic touches to the levels that reflect the cartoon’s simple humour, usually at the expense of poor Shirley, although her permanently non-plussed expression suggests she doesn’t mind. One of the early tricky levels in the Lost In London episode has Shaun and Timmy dodging passing speed cameras whilst trying to jump to and from vehicle roof tops, whereas Shirley just smashes them to pieces with her sizable girth. A followup level had Shaun and Timmy leap gracefully from one chimney top to another; Shirley just ran into the first one and then climbed the wreckage as all the chimneys toppled like dominoes. 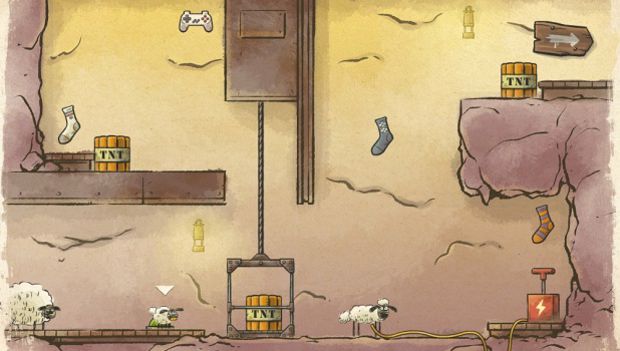 However, the actual level of difficulty seems to fluctuate between really simple and quite difficult. The aforementioned motorway level required some tricky platforming, yet the following level only took a mere 40 seconds and a single attempt to complete. There’s no real sense of a learning curve because there are new mechanics and items happening in each 2nd or 3rd level, so you’re not really mastering what you’ve learnt in previous levels. Ramps, explosives, water fountains and portals are all present but only make an appearance for a few levels. It keeps the game fresh and you have to smile when the Lost In Space levels introduce portals.

Home Sheep Home 2: a Little Epic is not the most challenging puzzle game out there, but it still manages to to feel pretty rewarding when you finish a level, and working out the exact sequence to use Shaun, Shirley and Timmy feels really good. I’d be interested in getting my hands on the iOS version to see how it translates to a mobile device.