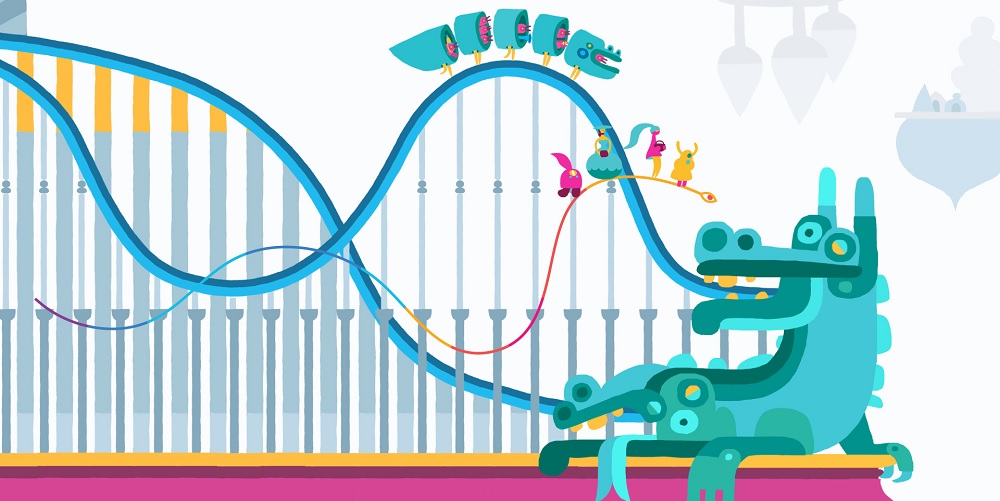 Seeking hay in a needle stack

Hohokum is amazing. It can also be quite awful.

My time with it was often as captivating as it was arduous. Hohokum is everything right and wrong with video games. It’s equally worthy of condemnation and acclaim.

I adore this horrible thing.

Hohokum presents itself as a virtual toy chest. With seemingly no preface or protocol, you are left to your own devices. It invites the player to explore a lavish collection of psychedelic worlds and play with the contents therein.

There are goals and activities, though precious little is ever done to intimate they actually exist. Hohokum is far too respectful for that. Its creators would seemingly rather let players wander, aimlessly until the end of time, than ever explicitly instruct them as to what they should be doing.

Our hero in this strange journey is a serpentine creature, one that possesses a single ability. Movement. It’s a reductionist approach to gameplay, one that encourages curiosity via constraint. Any effect players have on Hohokum‘s world is dependent on the objects you interact with. Everything that happens is a response to something you touch. The experience is like feeling your way around a pitch black room. The only way can you learn is by reaching out and bumping into things.

Any joy Hohokum imparts comes from a sense of discovery. Initially it seems like a playpen, a sandbox with no specific goals. It’s a mirror of someone’s imagination, a dreamlike world you can visit for however long that may be entertaining.

At least, that’s what I thought at first. I spent a good while wandering through vibrant landscapes before realizing what Hohokum actually was. I marveled at its kaleidoscopic scenery, frolicked with eclectic characters, and lost myself in its delightful synth-slicked soundtrack only to realize it’s a puzzle game.

Everything then changed. My saunter through hypnotic vistas became secondary as I conformed to a newfound set of rules. Nudged to play a certain way by Hohokum‘s gossamer rigidity, I felt my enjoyment wane over time. The experience became a frustrating scavenger hunt.

In each level, there’s a snakelike character, one very similar to your own, just waiting to be found. It’s never spelled out where they are, what must be done to free them, or why. The impetus is solely on the player to investigate everything, and piece it all together. It’s reminiscent of a crude point-and-click adventure game, where the logic behind puzzles is frequently vexing. Because of this, much of my time with Hohokum was spent running around in circles for no good reason at all.

Hohokum may look bright and colorful, but it can feel awfully like stumbling around in a darkened room. It’s a double-edged sword. Charting the unknown can feel as stressful as it is intoxicating. There’s serenity to be found in the shadows, but it’s just as easy to become agitated as you reach out into the black, searching for that elusive light switch.