Oh geez High on Life. You know, like, on one hand I’m keen on the whole “Justin Roiland voice” shtick, especially when it comes to Solar Opposites. But oh man….on the other….it’s getting a little old, you know? Especially if most people in those worlds feel like they’re just riffing, like everything is a stream of consciousness…like we’re all just…part of one big galactic party that never ends? Like how Shrek was mostly just a series of riffs from the actors, and a lot of it didn’t work? Look it up! On…Wikipedia…or Bing…or something.

Anyway, yeah, a lot of the Roiland shtick does still make me laugh, but there isn’t a strong enough game around it to really hold up High on Life. 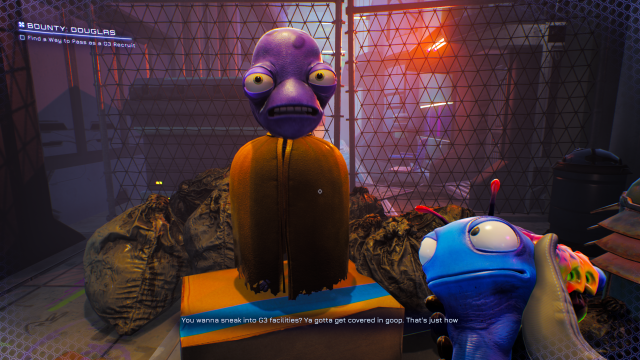 High on Life is an irreverent exploration-heavy shooter that’s very much inline with a lot of Justin Roiland’s prior work. If you’ve never played one of Squanch Games’ releases before, or have never seen Ricky and Morty or any number of his projects: it’s a lot of shock (sudden death)/gross-out humor, along with some really insane premises, typically in sci-fi setting. Imagine a Rick and Morty episode where Morty takes over the role of a bounty hunter and has a solo adventure, and you’re pretty much there.

In this particular game though, you play the role of a random human on Earth, in the midst of an alien invasion. One thing leads to another and you (and your house) is transported to another planet, and you’re making a deal with an ex-bounty hunter for their suit and their former glory. Oh, and you’re tasked with stopping an evil organization from taking over, potentially saving humanity in the process. You’ll do that by warping to different biomes/sandboxes to take down bounty targets (bosses).

To accomplish all this, you’ll be thrusted into a first-person viewpoint, with locomotion options like a jetpack and a grappling hook (which can attach to hooks or grappling lines that you can slide down); as well as sentient weapons that somewhat resemble a pistol, a shotgun, a rapid-fire SMG, and an alien-summoning…thing. All of these tools have an alternate fire of sorts, which typically double as puzzle-solving tech.

The weirdness of it all is easily the best part. Like many Roiland joints, High on Life is filled with twists, meta humor, and Easter eggs. There’s silly optional menu-based forums to read filled with jokes that you don’t actually need to engage with, random alleys that have interesting NPC interactions that serve no purpose other than to make you laugh, and good old fashioned video game secrets. The humor will be hit and miss for many though (just watch some gameplay to see if you vibe), and I felt like Squanch Games’ previous effort (Trover Saves the Universe) was funnier: because of the way the game riffs off of the Trover character, rather than a blank slate.

Gameplay-wise, High on Life is what I’d call a “serviceable” shooter. The team does a good job at making each weapon unique, from the simple fact that all of them talk (and are all voiced by comedians), to the aforementioned alt-fire mechanics. There is an incentive to use them all, and in nearly every combat sequence I was swapping guns and wielding their specific strengths (the “set it and forget it” nature of firing off goons with the summoning gun, then swapping to something else, is fun). There are some cool battlegrounds too, where you can use the grappling hook feature on full display, dashing and jetpacking around like a madman while you aim.

Where High on Life really falters is enemy variety. In any given zone, there’s usually standard trash/fodder that slowly fires a pistol with bad aim, some small flying UFO/drone thing, and a bigger elite that make up 90% of the collective you’ll be fighting. That formula applies to a lot of games, but none of those three types here are particularly exciting, or are even that unique from zone to zone. Bosses are sometimes a bright spot, but a bit of jank (more on that later) kind of sucked the spark out of several encounters.

While those high octane moments I mentioned earlier do exist, they’re not common. A lot of zones really lack oomph, and just throw enemies from the same few doorways at you until you’re allowed to proceed. Other sequences straight-up allow you to skip every enemy entirely, which is easy to do by the time you get the jetpack. Throw in a really shoddy objective marker and a bit of imprecise area design and you have an annoyance stew goin’.

Depending on your view of puzzles in shooters, the way High on Life handles them is either going to be a boon or a burden. They’re really breezy, so if you generally hate them on principle, you’re going to be happy. I’m sort of on a case-by-case basis, but I would have preferred if the puzzle complexity here was dialed-up just a bit. There’s a lot of potential there with the movement options, but a lot of it can be completely bypassed or quickly deduced: since most of them are solved through the same few weapon abilities.

One big issue with High on Life (and where the game mainly slipped for me) is jank. In my run I had multiple critical path doors that wouldn’t open, or a delay in a few similar sequences. I was able to sidestep these with a swift checkpoint reload, but in one particular case I wasn’t aware that there was even an issue until 20 minutes in. My objective was listed as “???” and I assumed there was some sort of trigger I needed to hit, before realizing that I was stuck in a glitch. There is a day one patch coming at launch (December 13) with fixes and quality of life upgrades, but I did not have access to it, and cannot confirm it addresses everything.

As-is, High on Life is great weekend Game Pass pickup, and something to go into with caution if you’re a fan of Roiland’s work. I appreciate what Squanch Games is doing in the industry as a whole, but Trover Saves the Universe was a much better distillation of Roiland and company’s humor in a sounder package.