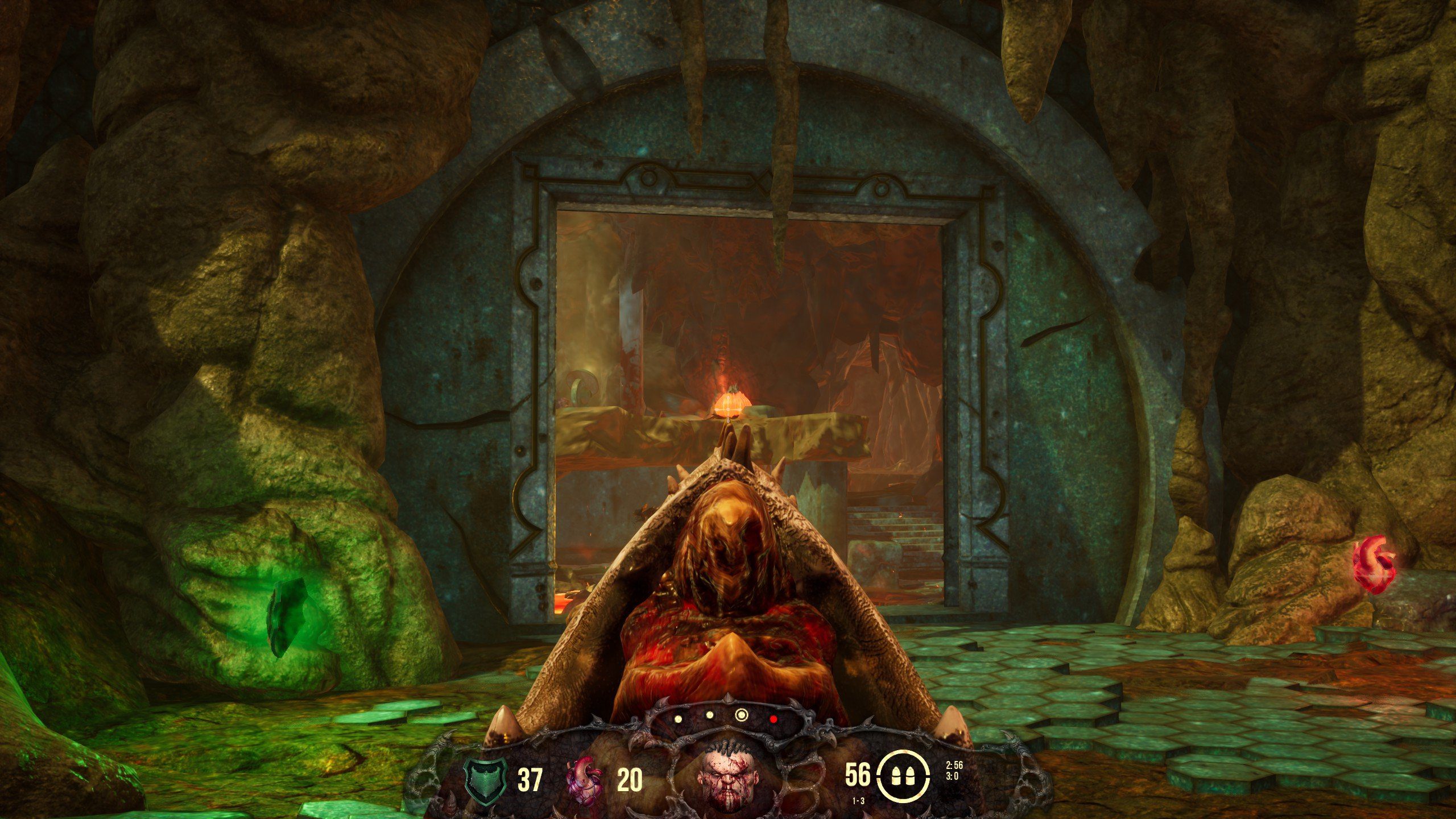 We have Ion Fury, Dusk, Immortal Redneck, Strafe, Prodeus, and countless others to keep us busy if we want to toil away our days reliving the glory days. Hellbound is another one to add to that pile, that does what it sets out to do and gets out, without leaving too fond of a lasting memory.

There’s something I’ve noticed about all these FPS homages lately that Hellbound thankfully doesn’t suffer from: a good number of these classic throwbacks are extremely cringey. I “get” that they’re paying homage to old school Duke Nukem humor, but having regularly replayed those retro shooters; writers as a whole haven’t found a way to really modernize it or do it in a way that doesn’t feel forced. Ion Fury is the first thing that comes to mind in terms of getting things wrong.

Hellbound keeps things simple and avoids that sand trap. You get to take control of Hellgore (played by Artie Widgery), a badass who has one thing on his mind: killing demons. Humor is on the back-burner, as Hellgore is mostly concerned with beating people’s asses to a [good ass] soundtrack. As it should be. That’s kind of the entire vibe that Saibot Studio is going for, and although that allows for a hint of sterility, it does mostly work.

I also noticed how meticulous the studio is in terms of replicating the mechanics of the classics. I had just finished a full re-run of Doom 64 so I saw things like periodic checkpoint auto-saves, and the fact that you start the next level without regaining health. Speaking of meticulousness: I like that health can go negative so you can see how much damage each hazard does, and plan for it. There’s a bunch of little details like that in Hellbound.

Hellbound, as the title suggests, mostly takes place in a hellscape setting, but the aesthetics are bright enough to allow everything to pop in a unique way. Levels are never too frustrating or too labyrinthine, with cool moments like clawing creatures sneaking up in claustrophobic tunnels. I had some genuinely thrilling moments where I blasted those creepy crawlers away with a shotgun, checking the corner to see if they’re still there; and having them claw my face off.

There’s some AI concerns and a lack of enemy variety, but the level design gives it a firm foundation to work with, with some clever placement of said enemies. Despite the very short length it can get tedious though (which is its main fault), and some areas are far less inventive than others. You’ll know the feeling when you hit your umpteenth “enclosed arena with enemies that teleport in” skirmish.

It’s a little janky, but nothing to be too concerned about — at least in my time with it. I had one instance of hitching, and sometimes a gun doesn’t fire unless you hit the fire button several times: but that only happened once in a while. I clipped through a mountainside in the game’s biggest arena, and the framerate maintained a respectable 60FPS 99% of the way through until the final boss fight, where it dipped briefly into sub-30FPS with a small army on the screen. It’s all minor stuff.

Hellbound‘s campaign is roughly three hours long, with secrets to find in each level and several survival missions that unlock after the finale. That’s it. Again, Hellbound is pretty upfront with what it is. If you’ve already burned through most of the homages I listed above, give this a shot.