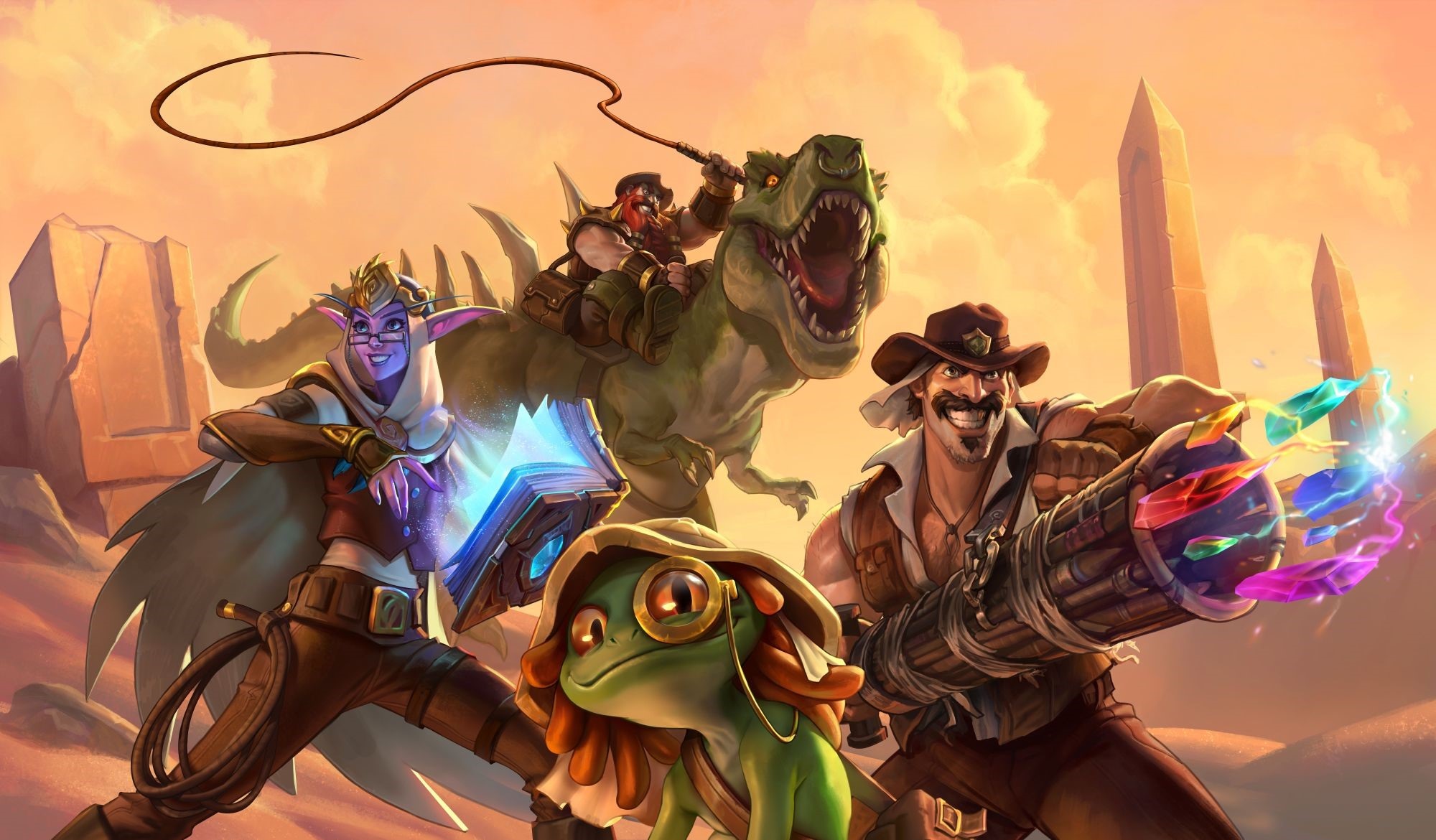 Blizzard’s Hearthstone has been the face of digital card games for several years now, reliably one of the highest earning mobile titles since it launched in 2014. The simple rules make it easier to follow than competitors such as Magic: The Gathering, and it’s been a consistent favorite on streaming platforms such as Twitch and Mixer as well. The game has been downloaded over 100 million times, making it by far the most played Blizzard title in existence. Unfortunately, it’s easy for a successful company to become complacent and stop taking risks, especially when it seems to have hit on a winning formula.

As always, we waited until the entirety of the expansion was available before writing the review. Is diving into Tombs of Terror worth the digital sand in your underpants?

Hearthstone‘s latest hearkens back to one of the very first expansions released for the game, all the way back in 2015. The fan-favorite League Of Explorers takes center stage, responding to the looming threat posed by the plagiaristic League of Evil. Saviors of Uldum pits the four Explorers against Arch-Villain Rafaam and his fellow evildoers. It’s a continuation of the storyline which began earlier this year, when Rafaam’s dream team of bad guys managed to steal the flying city of Dalaran.

After a brief crash landing near the Molten Core, the League of Evil drove the city to the Egypt-inspired land of Uldum. There, they bolstered their power by unleashing ancient plagues against any who dared to oppose them. Fortunately for the denizens of Azeroth, the League of Explorers have some experience fighting Rafaam and his cronies.

Uldum is a fairly mysterious setting in World of Warcraft, one which was hinted at early on but wasn’t made available until the Cataclysm expansion in 2010. Most of the area is covered by harsh desert, but there are ancient temples and tombs everywhere, just waiting to be discovered. Ageless creatures of living stone wander the paths of long-forgotten cities, servants of the Titans who came before. Naturally, the Explorers are interested in whatever secrets and technology they can extract from the area, and Rafaam’s plagues give them the motivation to use it a little more recklessly than might otherwise be called for.

Tombs of Terror lets you take control of one of the Explorers as they traverse the desert and try to fight against one of five Plague Lords awakened by the League of Evil. Each attempt is opposed by a series of semi-random minibosses, each of whom has their own gimmick or special power to overcome. Defeating them will earn the Explorers cards for their deck as well as treasure, in the form of overpowered minions, spells, and weapons. Occasionally, they’ll come across Bob’s Bazaars, which will let them make some changes to their deck, removing cards which don’t fit their strategy or adding extra copies of overpowered gear to the pile.

Purchasing each chapter unlocks one of four hybrid heroes for use in the roguelike single-player mode, with a fifth final challenge available once all of the other content has been unlocked. This single-player mode hasn’t changed much since its first appearance back in Kobolds and Catacombs, though the development team added a few twists this time to try and freshen up the gameplay.

The main difference between Tombs of Terror and the similar roguelike modes which have come before is the use of hybrid heroes as the playable characters. Each of the Explorers represents two of Hearthstone‘s nine classes, leaving only the Warlock class unrepresented. Bookish Night Elf Elise Starseeker combines the Druid and Priest classes, and has decks that focus on healing and summoning hordes of small minions to enhance. The brash Reno Jackson (a mustachioed Indiana Jones homage) uses Rogue and Mage cards, and can choose to steal from enemies or just blast them with his Gatling wand. Team mascot Sir Finley represents Paladins and Shamen, and tends to use cheap, fast creatures in his deck. Finally, guild founder Brann Bronzebeard makes use of Hunter and Warrior cards, and tends to play with weapons and Beast synergies.

Every run adds a couple of quirks to deal with as you attempt to take down the Plague Lords. The Plague Lord of Murlocs adds random weak minions to both sides of the board, the Lord of Madness causes creatures to attack randomly at the end of a turn, the Lord of Death adds deathrattle minions to the board when enough other minions die, and the Lord of Wrath rewards creatures which take damage with increased attack. The Lords themselves each have a ridiculous 300 health points at the beginning of your encounter, and their decks and strategies will change after every 100 damage you manage to inflict, making these boss fights much more dynamic than your typical game of Hearthstone. Fortunately, their health pool doesn’t reset, so you can whittle them down over multiple runs.

The semi-random nature of the cards and gear you discover gives this mode great replay value, though it’s always disappointing when you lose a game due to a run of bad luck. I still had a lot of fun playing through the campaign mode, wielding broken combinations and dominating the Evil lackeys who got in my way. But it’s hard to deny Tombs of Terror is awfully similar to The Dalaran Heist, and doesn’t offer as much in the way of rewards to players who decided to purchase the single-player expansion.

The Dalaran Heist was a breath of fresh air back in May and June, offering a premium Hearthstone experience and multiple ways to play through each encounter with all nine classes. As charming as the Explorers are, Tombs of Terror feels like a downgrade, especially since the gameplay is so similar. There are far fewer options available, and players only received a single legendary card when the expansion launched, as opposed to the three provided during Rise of Shadows.

From a monetary standpoint, most players are better off using their in-game gold or cash to simply buy packs rather than bothering with the single-player mode. The random nature of the rewards earned by playing Tombs of Terror means there’s no advantage to buying the expansion, and players who’ve already gotten the cards they want from the set have little incentive to buy it. I still think Blizzard would do well to let players choose at least one Legendary card from the set as a reward for beating the campaign, something more tangible than just random packs to make the juice worth the squeeze. I’d much prefer a return to the old ways, earning a small set of unique cards which could be unlocked by playing through the single-player modes, but I’m pretty sure the corporate overlords will never let this happen again.

Don’t get me wrong, Tombs of Terror is a lot of fun, and it’s great to see the League of Explorers again after they were removed from the game three years ago. The problem is, it’s the same sort of fun we’ve been having for two years now. It just feels a little too similar to what we’ve seen before, especially since so many of the previous Dungeon Run style expansions have been completely free. In my opinion, slight alterations to the Dungeon Run theme aren’t worth $60 per year. If Blizzard wants to continue charging money for these single-player expansions, the company needs to make sure the content is worth the asking price.

[This review is based on a retail build of the free-to-play game, with content provided by the publisher as well as purchased by the reviewer.]