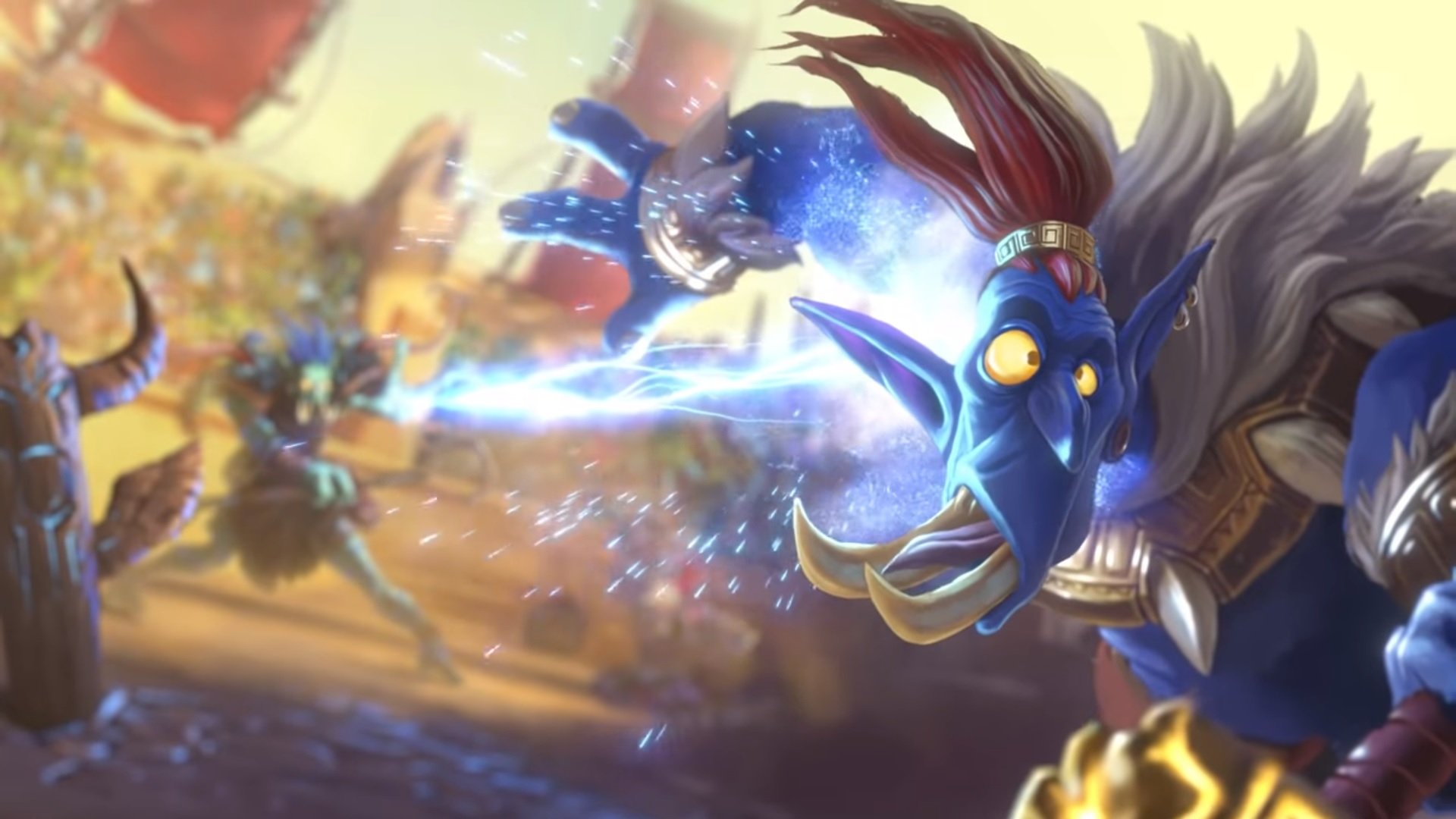 Blizzard’s collectible card game Hearthstone is one of the brightest spots on the company’s ledger sheet, having recently surpassed 100 million registered players. The game is in a pretty good place, with Valve’s Artifact stumbling out the gate and Magic: Arena limited to desktop computers for the moment.

CCGs need a constant stream of new content to keep from becoming stale, and Blizzard has been very consistent in releasing a new expansion every four months for the last few years. Earlier expansions this year explored a haunted forest and a goblin laboratory, and the most recent addition visits a coliseum run by the Darkspear Troll tribe. Rastakhan’s Rumble adds 135 new cards and a single-player mode called Rumble Run. This is the final new set for the Year of the Raven, so how do things look as Hearthstone heads into 2019?

I’ve always had a little bit of a problem with how Trolls are portrayed in the Warcraft universe. Something about their faux-Jamaican accent and reliance on Voodoo seems culturally insensitive at the very least. It’s my problem, I’ll deal with it. In any case, the new Hearthstone expansion takes a deep dive into the Trolls’ main form of entertainment, letting players experience the gladiatorial combat of the Gurubashi Arena.

As before, we waited until the PVE content went into the game to give this expansion a review. Rumble Run is the new single-player mode, and it challenges players to choose a class, then take on all eight other classes to emerge triumphant as the champion of the arena. Like the Witchwood and Kobolds and Catacombs single-player games, you’ll build a deck as you go, choosing from three sets of three cards to add to your deck every time you defeat one of the other combatants.

The main gameplay change in Rumble Run is the addition of Shrines, special totems that start the game in play and go dormant for three turns instead of being removed from the board when they’re killed. These Shrines each have a powerful effect you can build your deck around, and your character usually has a huge advantage while their Shrine is active. A lot of the play and counterplay involves trying to deactivate your opponent’s Shrine while saving cards that synergize with yours for turns when your Shrine returns to the battlefield.

Each class has access to three Shrines, and you’ll choose yours at the start of a run from three possible options, sort of like starting an Arena run in the PVP mode. Some of these Shrines are considerably better than others; I had good luck with the Priest Shrine that turns healing into damage when used against an opponent, and the Paladin Shrine that deals five damage to the enemy player whenever your hero is damaged. You’ll earn some overpowered cards after beating a few opposing Trolls, cards too broken to appear in the main game. Your later opponents will have access to a couple of these cheaty cards too though, so battles will become more difficult the further you progress.

I enjoyed playing through Rumble Run, but found the rewards very disappointing. Completing the mode with any class unlocks a special card back. That’s it. That’s all you can earn.

There’s nothing here for players who want to try and beat Rumble Run with every class, no way to play against other players with Shrines active (though I suspect this will become a weekly Tavern Brawl at some point). It can be frustrating to lose multiple games here to RNG or broken plays from the computer, but it’s downright insulting how little you get for sticking it out. There’s no reason ever to return to this mode after beating it once. It’s anticlimactic, and extremely disappointing after the excellent mode that shipped with The Witchwood.

Granted, every player got six free packs and a random Legendary card just for logging in when Rastakhan’s Rumble first launched, but these are subject to the same RNG as any other loot box. I still think if Blizzard isn’t going to let players earn specific cards through single-player campaigns, the company should at least let players choose one of the rare and expensive cards from each expansion by beating its PVE content.

Moving on from the PVE to player vs. player, Rastakhan’s Rumble didn’t really do much to shake up the metagame. Hunters continue to top the leaderboards, buoyed by their new champion Zul’Jin. A new patch this week nerfed Odd Paladins, Druids, Shudderwock Shamen, and Kingsbane Rogues, so it’ll be interesting to see how things shake out as we enter the new year. The change to Level Up! might just end up shifting the dominant Paladin deck from Odd to Even, particularly since it stacks with Sunkeeper Tarim. I just hope you like playing against Hunters, ’cause you’re probably going to see a lot of them on the ladder through next year.

Some professionals are predicting Discard Warlock will become dominant, while others feel Paladins will be able to leverage healing into a viable threat. Dragon Warrior hasn’t quite gelled yet, and Priests’ new focus on buffing creatures in their deck is risky, but pays off in the late game. Odd Mage works pretty well, especially now that the class can cheat out Ragnaros with its new Legendary card Jan’alai. Some new neutral legendary cards have potential, particularly Hakkar (who was responsible for World of Warcraft‘s infamous Corrupted Blood incident) and Da Undatakah. That said, nothing major has shaken up the meta, so if your opponent drops Prince Keleseth on turn two you’re still probably going to lose.

I do like the new mechanic from this set. Cards with the keyword Overkill do something extra if they deal more damage than necessary to destroy a minion. It’s meant to evoke images of a wrestler hyping up the crowd after delivering a particularly heavy hit to an opponent. This can have some fun interactions, especially if you would gain more by killing your own minion than one of your opponent’s. Cards with this mechanic can keep pressure on or help swing momentum, and the few that have been added so far seem reasonably fair.

Rastakhan’s Rumble isn’t the best expansion Hearthstone has ever released, and it’s only a small step up from August’s Boomsday Project. Unfortunately, like its predecessor, the reward for completing the single-player content is extremely disappointing. Rumble Run is a decent way to spend about an hour, but that’s all it is and you’ll never go back to it. I hope Blizzard puts more resources into the next expansion’s single-player mode.

[This review is based on a retail build of the free-to-play game, with content purchased by the reviewer.]