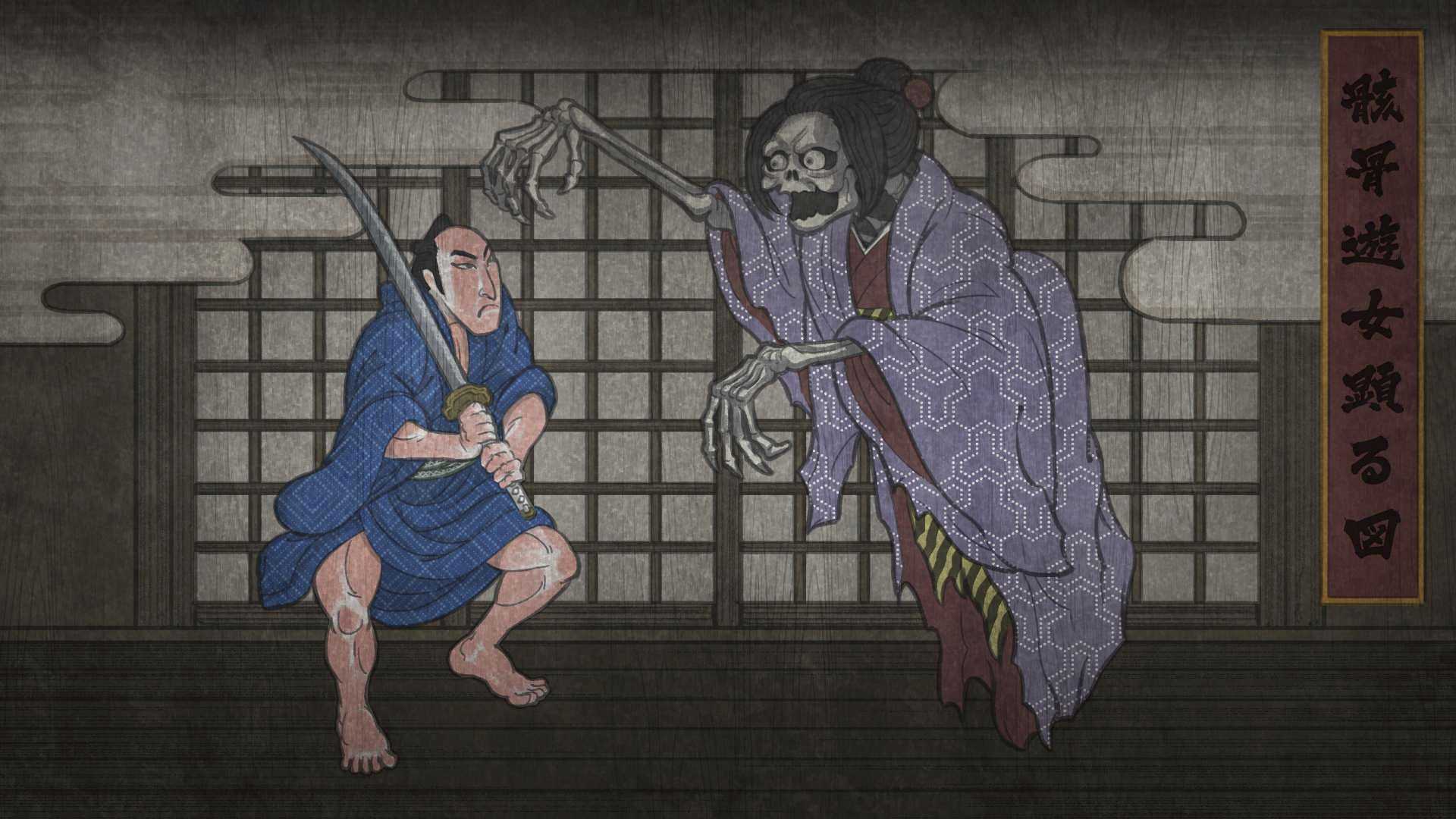 My biggest disappointment of 2018 is that I am not able to use the subtitle “Hyakki-Suck” to describe Haunted Dungeons: Hyakki Castle. It really is just a darn shame, but you can’t win ‘em all.

I have a little soft spot in my congealed gravy heart for dungeon crawlers, but was completely unfamiliar with Eye of the Beholder and others like it in the action-RPG, first-person, dungeon-crawler genre, the most popular example as of late being the excellent Legend of Grimrock series. Grimrock was as new as anything to me when I played it a few years ago, and the cold atmosphere, creepy enemies, and wonderful tactical gameplay it offered was an absolute joy.

Haunted Dungeons: Hyakki Castle on Switch occupies the same territory, and is similar to Grimrock in many fundamental ways. Its focus is a unique party-splitting mechanic, but after sitting down with it, I am still scratching my head and asking, “but why?”

It’s really easy to get carried away during the design process with all sorts of unique, fun ideas. Generally what happens at some point, however, is that somebody sits you down and tells you it either isn’t possible to implement all the things you want, or it will cost way too much money. Occasionally, Haunted Dungeons feels like this situation occurred, but that the devs just went ahead and did it anyways, because the party-splitting mechanic which takes front and center stage in the game, well, kind of Hyakki-sucks. (Alright I feel better now.)

That is to say, it is potentially interesting. But it’s also a cumbersome pain in the butt to try and manage when you are in a dungeon where every wall looks identical, and moving around in a tile based grid. The puzzles are generic switch pressing affairs most of the time, where you make two party members stand over here so that the other two can go through a door and press another switch to hold the door open permanently, and then if you are anything like me, merge the party back together as fast as possible before something pops out of a door and murders you.

Sometimes you will run into enemies that are pretty much invulnerable to frontal attacks, forcing you to split up in order to get some back or flank attacks in to do real damage. But in both the exploration and the combat, the mechanic never really feels like it adds anything crucial (or thematic for that matter) to the overall experience.

All Haunted Dungeons needed to be was a straight up Grimrock clone, in a Japanese setting, with Yokai instead of goblins. That would have been enough. Thankfully you can play most of it this way, and while it never approaches the ingenuity of some of the level and enemy design of Grimrock, it’s a fairly competent dungeon crawler in its own right. You can choose from a selection of four classes and four races (Nekomata for life) to create a unique party of characters.

I chose the default party just to get a sense of the balance, and it worked pretty well, but you could mix and match your party however you like. (I have it on the authority of a friend that three samurai and a healer works out pretty nicely.) There are several skill trees to progress through for each class using skill points doled out while leveling, you have a few slots for new equipment on each character and a skill bar correlating to the four face buttons that you can customize – and that’s basically it. Ascend through the castle, kill the demons, solve the occasional puzzle.

And this part is fun enough for me. It’s a weird game to review because I like the parts that took a back seat, and didn’t give a toss about the stuff the designers were clearly proud of. Initially it seemed exciting to be able to split a party into halves and then swap between them parties with the touch of a button in split-screen mode, but eventually I found myself rolling my eyes every time I was forced to do this. Fortunately, because the actual base game is entertaining in its own right, I’m okay to forgive what is more often than not wasted code and praise what is there.

As a Legend of Grimrock clone (let’s face it, that is sort of the new standard for that genre) Haunted Dungeons is decent. The various enemies all have different weaknesses and ways to approach them, and the Japanese aesthetic (and wonderful, haunting opening theme) is fun. There are usually a couple of save points on each floor you can use to heal up and save which requires your characters’ hunger gauge to not be empty (replenished by eating food fairly generously scattered throughout the dungeon as long as you don’t dilly dally shilly shally for too long) and this is important because death comes very quickly to those who play poorly, which I often did. Some enemies are a real pain in the arse, and if you don’t approach them with a strategy, you will definitely die and have to reload your game.

I did notice one jarring bug, which is that the “passive skills” information tab just says “no info available”. That seems so blatantly obvious a thing to fix, but was certainly no deal breaker. Performance is hit or miss, with little framerate drops occasionally, and the UI doesn’t scale super-well. For what looks like a PlayStation 2 game, I was hoping it might run a bit smoother, but for the type of game it is, that shortcoming doesn’t detract at all from the overall experience.

Haunted Dungeons: Hyakki Castle grew on me. It’s drab, depressing early dungeons made way to more interesting locales as I ascended into the castle on my quest to destroy the evil minions of an exiled sorcerer (honestly, don’t expect really any crucially interesting story here, this game is about killing things) and the presence of the odd boss monster was a nice way to add some incentive to keep moving forward, with a fast paced leveling system and hunger gauge aiding a feeling of constant forward progression.

While overly ambitious, Haunted Dungeons: Hyakki Castle is an enjoyable enough dungeon crawl, but could easily be ignored if you aren’t absolutely in love with the genre.