The Harry Potter franchise is a riddle gaming just hasn’t been able to crack yet. There have been many attempts over the years, with different developers and publishers taking a swing at the book and film series, with mostly middling results. We’ve seen terrible adaptations of the movies, a decent take on the nonsensical sport of Quidditch, a couple of okay LEGO titles, and one of the worst mobile games I’ve ever had the misfortune of “playing.”

If any game had a chance to break the spell of average-or-below titles, it was Harry Potter: Wizards Unite. Taking the gameplay made world-famous in Pokémon Go and injecting a heaping dose of Wizarding World into it seemed like a surefire bet. Turns out, it’s not as good of a combination as I would have hoped for, and after nearly a month of playing, I’m about ready to give the whole thing up. 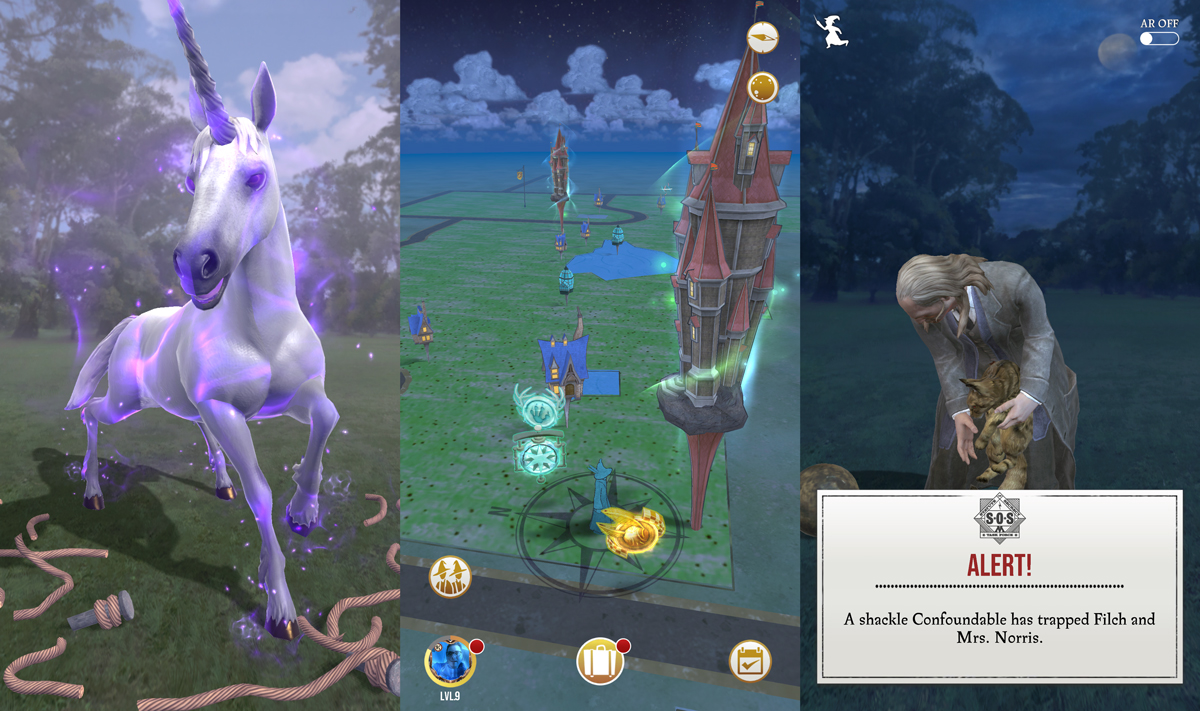 Harry Potter: Wizards Unite is about the closest we’ve come to being able to live out our Wizarding World fantasy in a video game. When you download the game, you’ll create your wizarding ID, upload a picture of yourself, and get to task retrieving all of the Foundables located in your area. Like Pokémon Go, this is not a game for couch potatoes. You need to get outside, get some fresh air, and really explore if you want to get the most out of it.

I started playing Wizards Unite right after I moved to a new town and it really did an exemplary job of introducing me to my new surroundings. Wizard’s Unite uses a lot of the same points of interest for its cafes, fortresses, and greenhouses that Pokémon Go used for its gyms and PokéStops. While playing during the cool periods of the evening, I discovered a great bakery, a bike shop, and what I suspect to be a meth house.

The key conceit of the game is you’re hunting down Foundables, different objects, creatures, and characters from the various movies and books in the Wizarding World. A wizard known as Grim Fawley may be responsible for the event known as the Calamity, so any and all wizards are being asked to join the Statute of Secrecy Task Force to find all the Foundables and return them to their rightful place and time.

Collecting a Foundable means selecting an icon on the map and doing battle with whatever Confoundable is keeping it from returning home. Battling a Confoundable is as easy as tracing a line on the screen with your finger to cast a spell. Do a good job and you’ll have a better chance of freeing the Foundable. If it’s too strong, there are potions you can use to improve spell power. Foundables you free are entered into your registry, though some require several encounters before they’re truly added. This can be as little as freeing the same Foundable three times or, especially with rare, event Foundables, repeating the process a dozen times.

It’s clear Niantic used Pokémon Go as the blueprint for this game. Catching all these Foundables is similar enough to catching all the pokémon that the formula is immediately recognizable to anyone who downloads Wizards Unite. But I don’t think this is the best fit for the Harry Potter franchise. It doesn’t quite make enough sense to work and it completely lacks the novelty factor that other game continues to exploit to this day.

When most people imagine pokémon in the real world, chances are they imagine themselves as a trainer. That’s the wish-fulfillment Pokémon Go has effortlessly going for it. It tapped into that shared imaginative experience millions of gamers have daydreamed about since the ’90s to massive success. Wizards Unite doesn’t have such a luxury. I don’t think when anyone read any of the Harry Potter novels or saw the movies, they imagined themselves as wizarding stamp collectors, traveling around town collecting pictures of different objects they can put in a book. Pokémon Go did what it could to make you feel like a real-life trainer and while Wizards Unite does do a decent job of giving players a sense of what it’s like to be a wizard or witch; the central conceit is so drab and uninteresting that it became more and more difficult for me to even boot up the game on the nightly basis knowing that I’d no doubt have to save Filch and Mrs. Norris from a bewitched ball & chain for the umpteenth time that week.

One compliment I will pay Harry Potter: Wizards Unite is it does craft a somewhat unique arc for each player. With the profession system, you can choose between three skill-trees — Aurora, Professor, or Magizoologist — that are unique enough to warrant carefully choosing which to pursue. I went with Professor and found myself well-suited for battles against dark wizards and creatures at the fortresses, though I would have been more useful if I could literally find one other person in my town playing this game.

Beyond that feeling of individuality, I’m just not sold on what Niantic has created here. There are small, annoying issues with storage, access to necessary potion ingredients, and the wild inconsistency of how well it rates my spell tracing, but the far bigger problem with Harry Potter: Wizards Unite is its inability to utilize the IP and the technology in a way that is not only engaging but also distinct from Niantic’s other games.  I have no doubt in my mind there is a great Harry Potter AR game out there. This just isn’t it.